How to Create a Hair Braid Pattern Brush in Illustrator

In today's tutorial, I'm going to show you how to create a deceivingly complex yet easy to make patterned hair brush using Adobe Illustrator. You'll learn how I illustrate braids/plaits and then how to apply this element yourself in your hair designs.

I often get asked how to create detailed elements in hair design with ease. More often than not the response to this is with the use of brushes, from creating strands of hair all the way to more complex elements such as hair plaits.

In today's tutorial, I'm going to show you how to create a deceivingly complex, yet easy to make, patterned hair brush using Adobe Illustrator. You'll learn how I illustrate plaits and then how to apply this element yourself in your hair designs.

The Structure of a Plait

Hair plaits, often referred to as braids, are created from an odd sections of hair overlapping each other to produce an intricate gathering of hair. Due to them having a repeating pattern, they are easy to reproduce in vector in the form of a patterned brush.

There are many different ways to create a plait. However, the most common way, and probably the way most girls are shown as a child, is with three sections of hair overlapping each other. This is the form I'll show you today.

I'm going to start with drawing the whole of the plait as a skeleton/rough design so you can see the structure of the plait. If you're creating one large plait in your illustration, it might be worth using this base to create your plait and work directly from it, rather than using a brush.

First, draw a vertical line on your canvas using the Line Segment Tool (\) and then go to Effects > Distort & Transform > Zig-Zag. 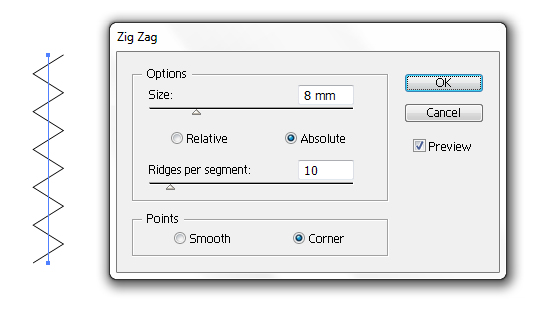 Go to Object > Expand to remove the effect and make it a standalone line. Use the Line Segment Tool (\) to add a line along the top slant, and then Copy (Command + C) and Paste (Command + V) the line for each one of the other slants which are at the same angle.

Select All (Command + A) of the diagonal lines and then duplicate them. Go to Object > Transform > Reflect > Vertical. Move them into place. In this example I've had to duplicate an additional line for the bottom. Reduce the Opacity of the lines to 50%, as these diagonal lines are just a guide.

Draw two lines between the first and second points where the diagonal lines cross over. This will be how thick the plait will be. Again these are guide lines, so just reduce the Opacity of them to 50%. The Zig-Zag line is the only "permanent" line in the design.

Using the Pen Tool (P) draw your first curve starting from one of the central points on the Zig-Zag. If you look at the screenshot below, the end curve's handle is parallel to the diagonal lines on the guides, and the curve itself graces the vertical line at the right of it.

Duplicate the curve for each one of the sections on one side. 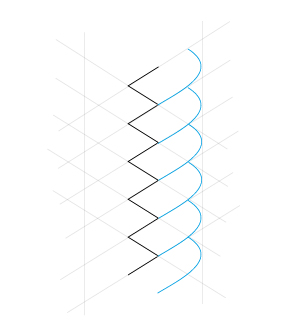 Then select all of the curves on one side and then duplicate them. Reflect them Vertically for the other side and line them up.

Now you have completed the structure of your basic plait. To test that you've constructed it correctly you can look at the three sections and see that they are interlacing with each other correctly, as shown below. This is helpful if you want three independent colors to be involved in your complex hair design. 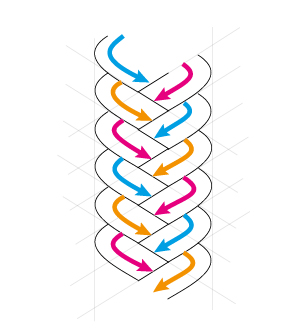 So I'm going to use the middle section of the plait to create a patterned brush and then show you how it looks on a portrait.

Start by drawing a Rectangle (M) around the "middle" section. I've done this in Outline mode to ensure I've selected the section accurately.

I'm going to color the sections in bright colors to show you each one of the individual objects.

First I'm going to draw the boundary/outline of the plait. Although there will be detailing added to this, the outline will be needed to give the plait definition. As previously done, duplicate each section and reflect them to ensure the lines are symmetrical. I've set these lines to a Stroke Weight of 6pt. These should be of a mid to dark gray tone. 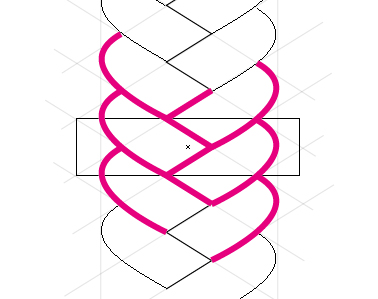 Begin adding detailing strands to the plait. Once you complete one section, duplicate them by Copy (Command + C) and Pasting in Front (Command + F). Move them by using your arrow keys, rather than manually with the mouse. Doing it this way will ensure that they have not been moved vertically.

After one side has been done, duplicate them and Reflect them for the other side. I have set these strands to Stroke Weight 4pt and applied the Profile "Width Profile 1" brush. These strokes should be of a mid to light gray tone.

Add the background to the plait shape. Make sure this shape is behind all the other strokes. This shape should be of a mid tone gray.

I'm going to add some shadow definition to the portion of the plait that is being overlapped. I'm going to draw this with the Pen Tool (P). Use a dark gray tone for these shapes because they are to be shadowed areas. 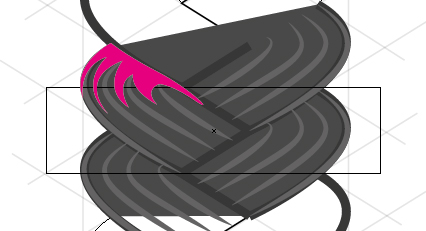 Then duplicate and Reflect as before to apply this to the other sections of the plait. 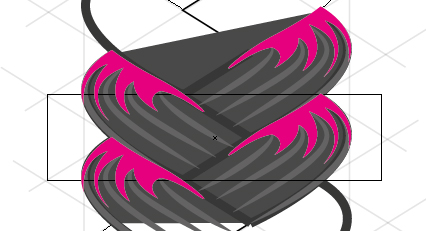 Now add shapes for the bottom of the sections, duplicate and Reflect as before.

Once done, use Pathfinder to Unite these elements with the previous shapes created. You may need to clean up the shapes by removing any stray points.

As there has been some shadow cast around the edges of the section, I want to add some highlights to this also. Use the Pen Tool (P) to create some curved lines on each of the sections and then applying a "Width Profile 1" to the strokes with a larger Stroke Weight of about 6pt - draw lines towards the center. Set these strokes to Blending Mode Screen.

Group the strokes and then duplicate and Reflect them for the other sections.

Select All of the objects and strokes created (Command + A) and then go to Object > Expand until all strokes become objects. Then Group (Command + G) the objects so they are easier to refer back to. It's also worth noting with some of the elements I have used Pathfinder Unite or created a Compound Path (Command + 8) of them to make one solid shape. I've also condensed the width of the plait design because I feel it looks a bit more realistic in this sort of width.

Duplicate the rectangle used to define the boundary for each one of the groups and using the Pathfinder options select Crop. With some of the groups you may have to use Intersect on Pathfinder, as shown below.

Do this until all of the groups have been Cropped. You can test you've got your pattern plait correct by duplicating the group and lining them up end to end.

Group all of the objects of the plait section (Command + G) and then go to Object > Transform > Rotate > -90 degrees. While selected, in the Brush palette select New Brush > New Pattern Brush and you should get the below.

By creating your brush in grayscale and selecting the Tints option from the Colorization Method drop down menu, you can alter the color of your new brush. Trying playing with colors and Stroke Weights to see what fun objects you can create.

Of course, you might want to create plaits that are open ended. The quickest way to achieve this is as follows:

Realistically due to split ends or layering of hair, the plait should be less dense towards the bottom of the plait. So to achieve this first Expand the plait you have. 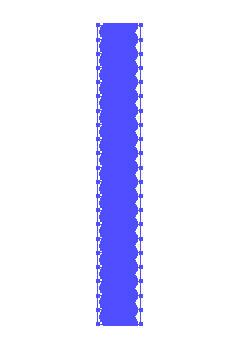 And then go to Effects > Distort & Transform > Free Distort and increase the width at the top of the plait and decrease it at the bottom.

Using the Pen Tool (P), add some strands to the bottom of the plait with different shades of gray and apply the "Width Profile 4" Profile to it.

Add a hair band to the end of the brush using the Rounded Rectangle Tool. This will help tidy up the stray ends. 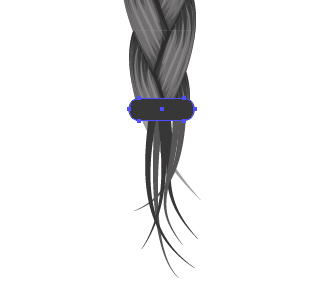 Depending on how you're going to apply the single plait, you could add additional strands towards the top and even make an Art Brush out of it instead of a Patterned Brush. The possibilities are endless. 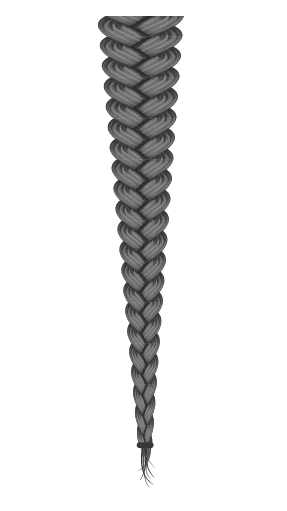 I've implemented the plait brush into a previous tutorial I did for Vectortuts+ to show you what it is like with a detailed hair design. I've drawn the strand I want with the Pen Tool (P) and applied the plait brush.

Now by duplicating the brush and changing the Blending Mode to Multiply, and then duplicating again and using either Blending Mode Overlay, Color Dodge or Screen, I've been able to get a mixed variety of tones from using the same stroke color. Different hair illustrations have different levels of detail, so by playing with Blending Modes the plait brush can be universal in application to your portraits. 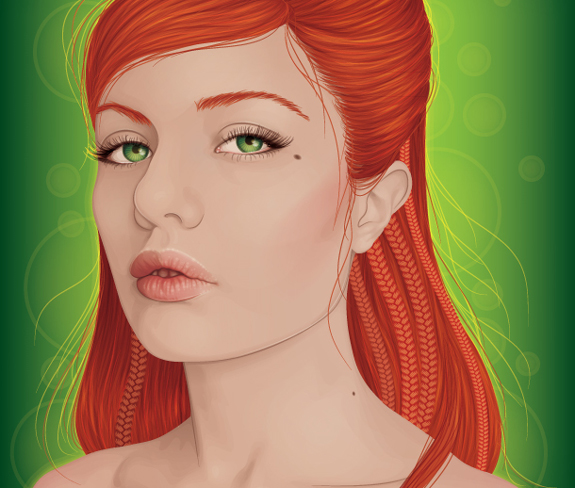 Sharon Archer-Thomas
Sharon Archer-Thomas aka ChewedKandi is an Illustrator and Author specialising in vector art. She's from Newcastle Upon Tyne in the United Kingdom. She's also our Design & Illustration Editor here on Tuts+. You can check out her website portfolio by going to ChewedKandi.net and keep up to date via her Facebook page. Find her on Behance.
chewedkandi
Weekly email summary
Subscribe below and we’ll send you a weekly email summary of all new Design & Illustration tutorials. Never miss out on learning about the next big thing.
Advertisement
Download Attachment
Translations