How to Create a Golden, Vector Compass in Illustrator

In this tutorial I will take you through the steps and techniques of creating a golden compass. For this tutorial I’ve used just Adobe Illustrator and a heavy dose of ingenuity. Let's get stared!

Every few weeks, we revisit some of our reader's favorite posts from throughout the history of the site. This tutorial was first published in September of 2009.

Want access to the full Vector Source files and downloadable copies of every tutorial, including this one? Join Vector Plus for just 9$ a month.

Create a circle (width 367px) with fill color and no stroke by using the Ellipse Tool (M). Make sure to press Shift while you create it so you get a perfect circle and apply a radial gradient, as shown in below.

Let’s start with the markings. Create a rectangle (L) at a width of 0.688 and height of 13.044 – towards the upper side of the circle and replicate it towards the lower side (hold the Alt + Shift while you select and drag the upper one downwards). 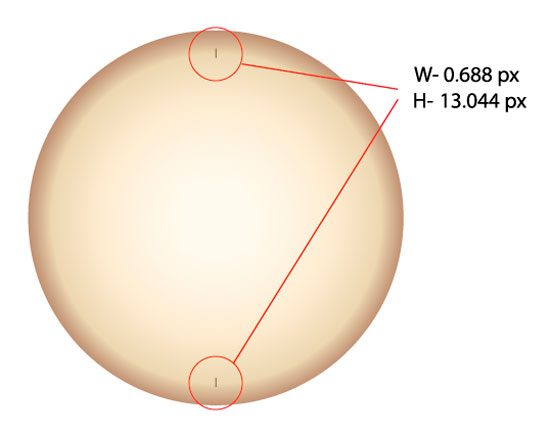 Select the rectangles using the Selection Tool (V). Group them together and align the two of them and the circle both horizontally and vertically on the center. 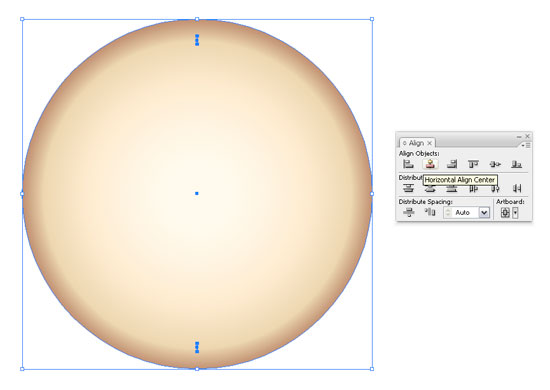 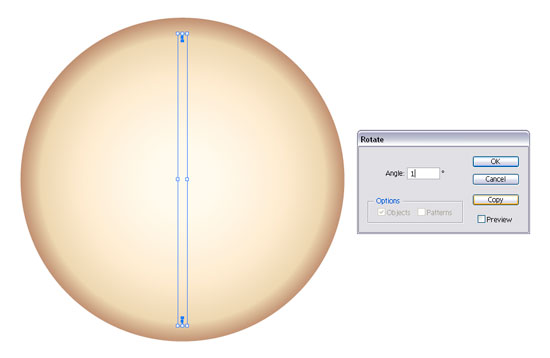 Now press Command + D to repeat the rotate copy, and repeat until you get to complete a circle made of small markers, as shown below. 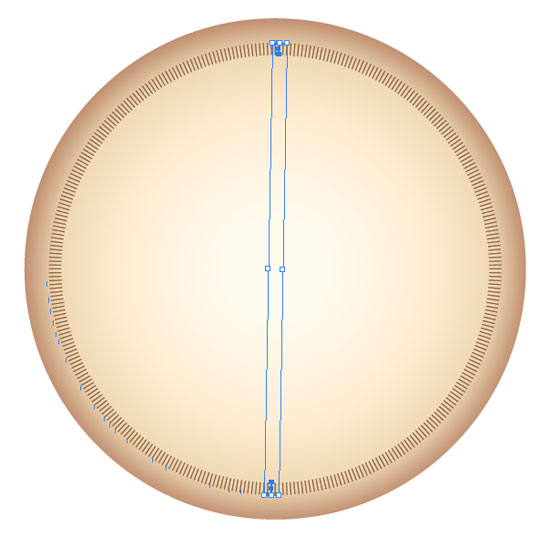 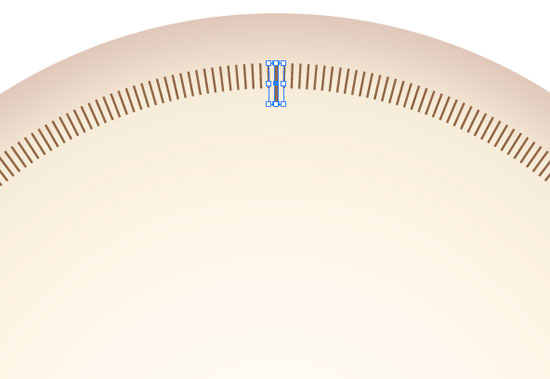 While this marker is selected, copy and drag it downwards. Make sure you press both Alt + Shift while you drag it so it will be centered with the upper one. Once you’ve reached the bottom group them together (Command + G).

Rotate the group by an increment of 20 degrees (Right-click > Transform > Rotate) and press copy in the Dialog Box. 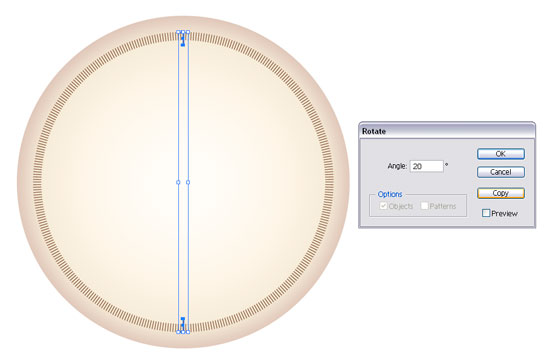 Duplicate the action in Step 8 until you covered all the circle by using Command + D.

Now that we have the markers for the 20 increments, we’ll need the ones for the 10 increments. Select the center marker with the Selection Tool (V), copy and paste in front (Command + C and Command + F), then drag it from the bottom upwards by holding the Shift key so that the size is in between the small and big markers. 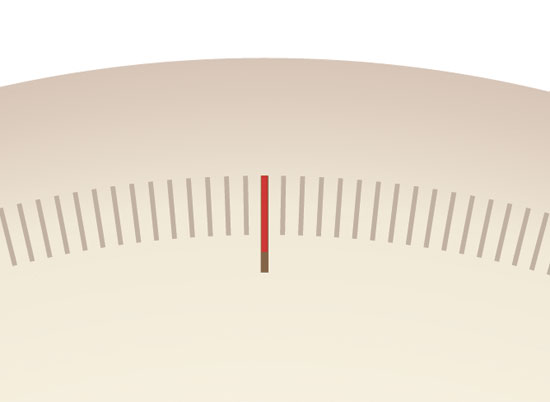 Select the new marker with the Selection Tool and copy it downwards by dragging it while holding Alt + Shift. 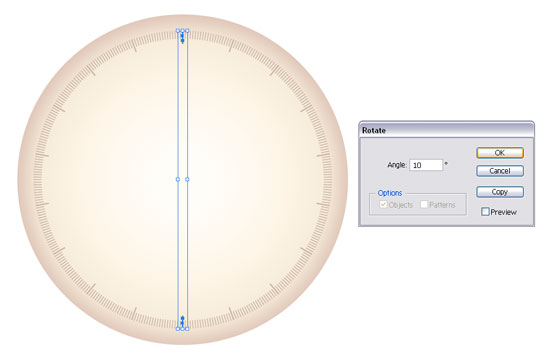 Group both of them (Command + G) and rotate by 10 degrees (Right-click > Transform > Rotate). This time in the Rotate Panel click OO.

Select the rotated one group and rotate it again with 20 degrees, like in step 12 but this time press Copy in the Rotate Panel. Repeat (Command + D) until you get a full circle. 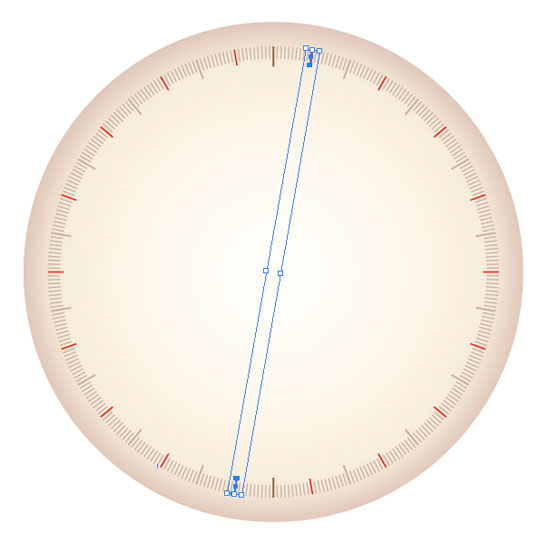 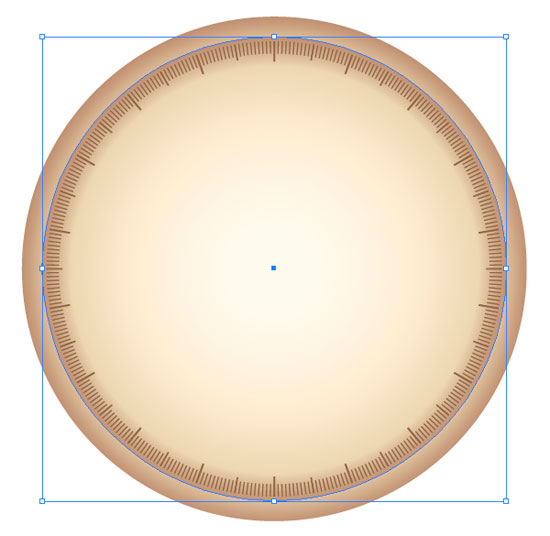 While keeping the circle selected use the Type on a Path Tool to write the numbers on the circle that you’ve just created. 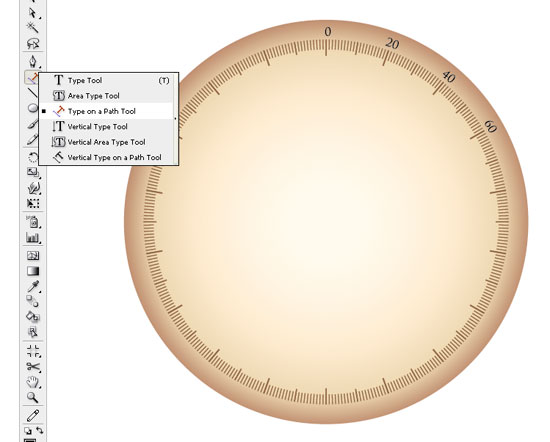 Continue to create these numbers in increments of 20 until you are finished. 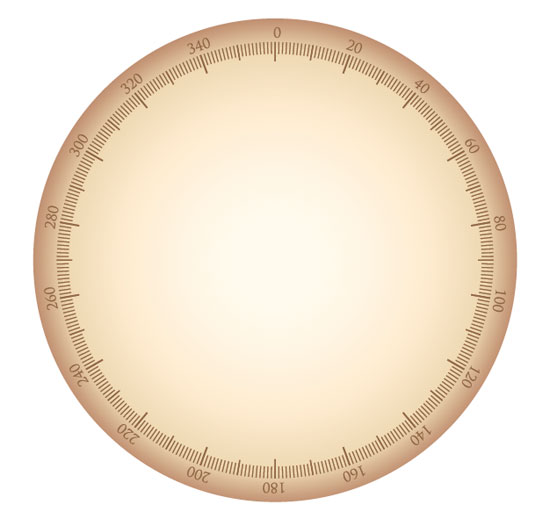 Create a star with four corners by using the Star Tool. Play around with the arrows and Command while you draw it. The one I drew is 225,887px wide. 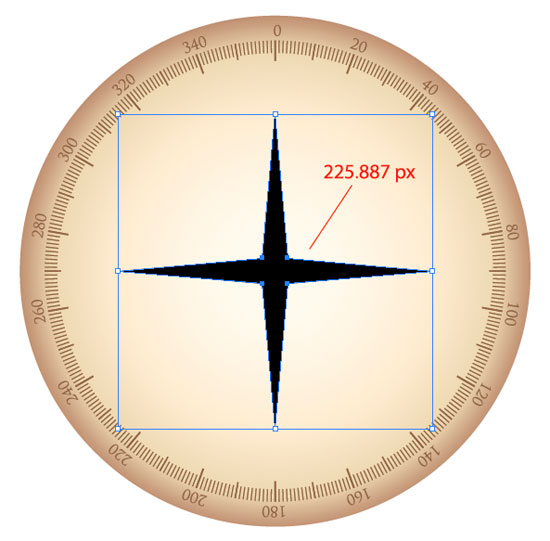 Now that we have a start we need to color each corner in two so we’ll have to divide it on the middle: 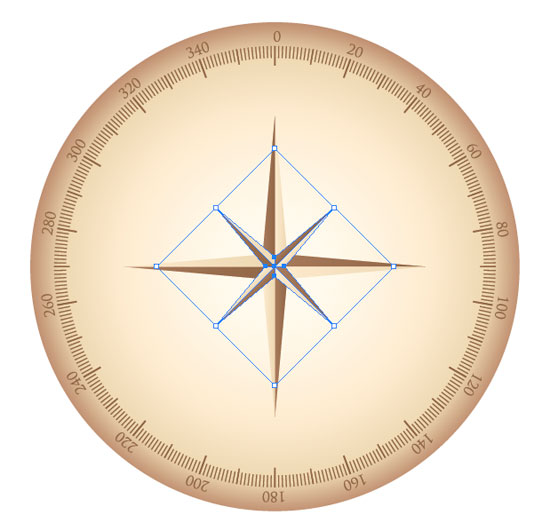 Delete three sides of the smaller star and leave just one. Select the two anchor points you see in the above image using the Direct Selection Tool (A). Then use the Selection Tool (V) to drag the upper-right while holding the Shift key until they intersect the bigger star. 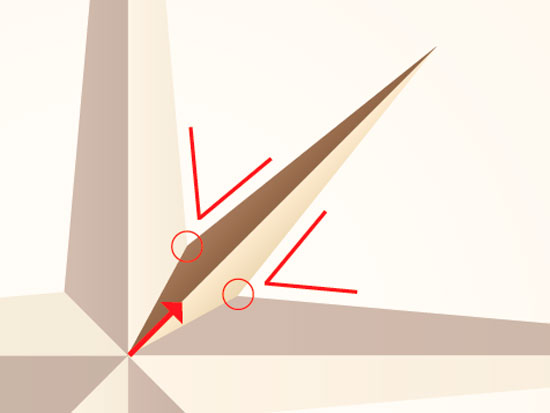 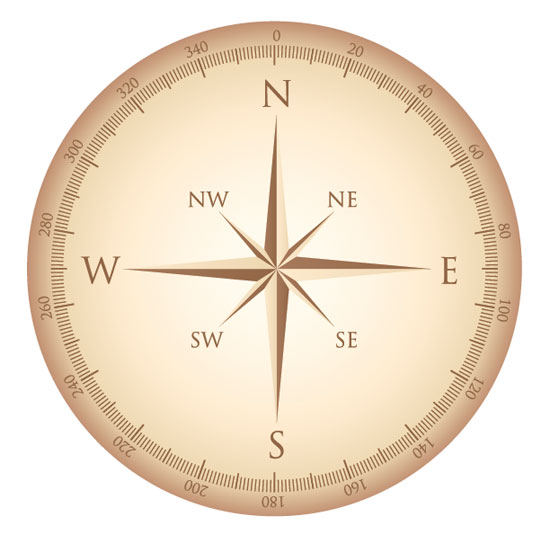 Now that we’ve created the direction markers we need to create the mobile part of the compass. Enter the group containing the big star, copy the horizontal segment (Command + C), and paste it (Command + V). Now Select the upper two anchor points using the Direct Selection Tool (A), then Right-click > Average > Both. 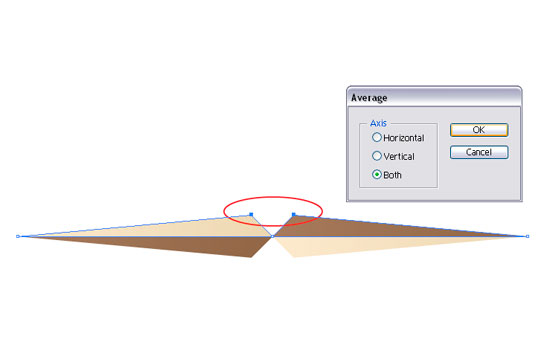 Add some color to the segment to make it stand out. I’ve added the colors, as shown below.

Using the Ellipse Tool (L) while you hold the Shift key you add two concentric circles to the center part of the mobile segment. In the image below you can see the colors I’ve used for the radial gradients, but you can also access the source files available for all Vector Plus Members. 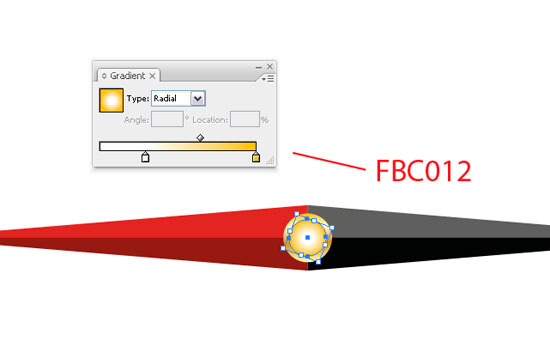 Group (Command + G) all the elements drawn up to now together.

Let’s create the golden frame of the compass. Create four circles using the Ellipse Tool (L) while you hold the Shift key. Start with creating the widest and finish with the smallest. I’ve created mine with the following widths:469px, 460px, 449px, and 393px. 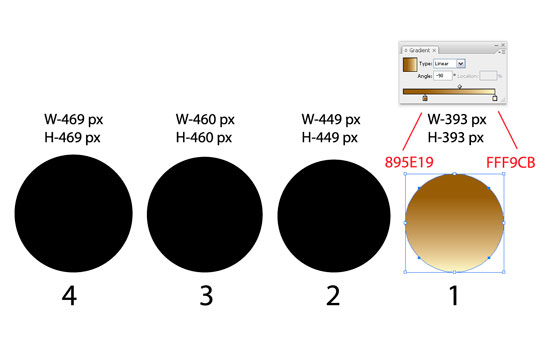 Now let’s add some gradients and group the circles together. The swatches I’ve used are available for the Vector Plus Members in the original format. 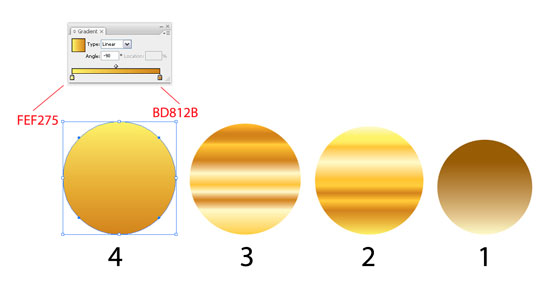 Select both the golden part and the other and arrange them using the Selection Tool (V) until you get a similar illustration to that shown below. 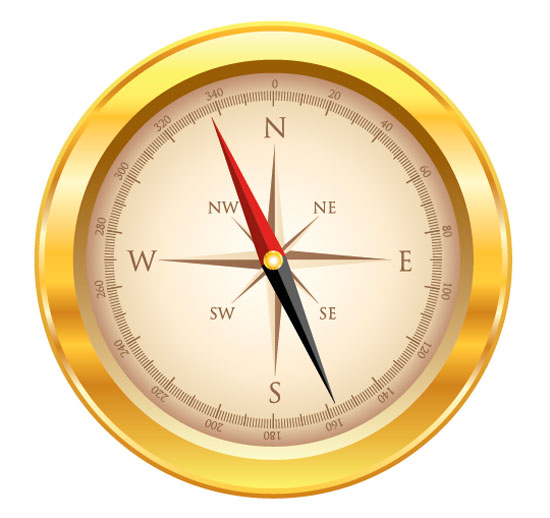 Lets add a shadow to the compass: 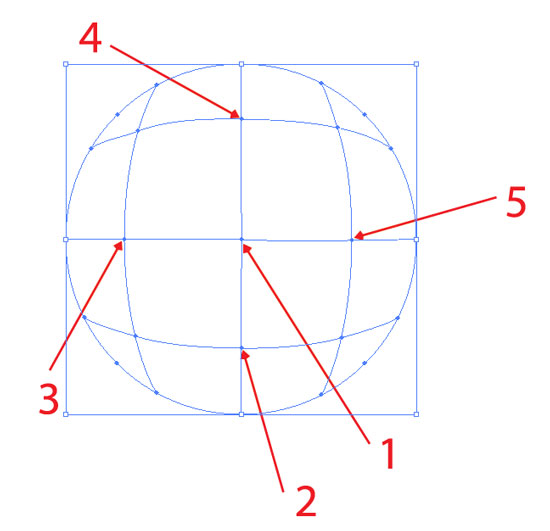 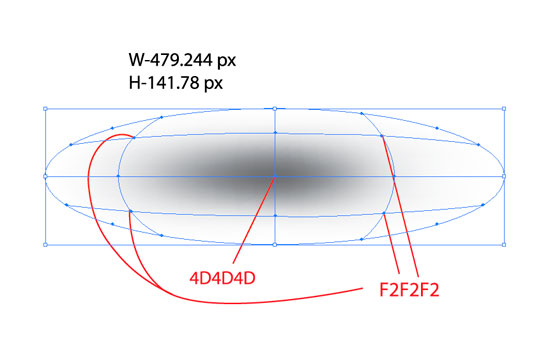 Finally add the ellipse under the compass and position it so you can emulate a light source that created a shadow. Here is the image I’ve obtained. 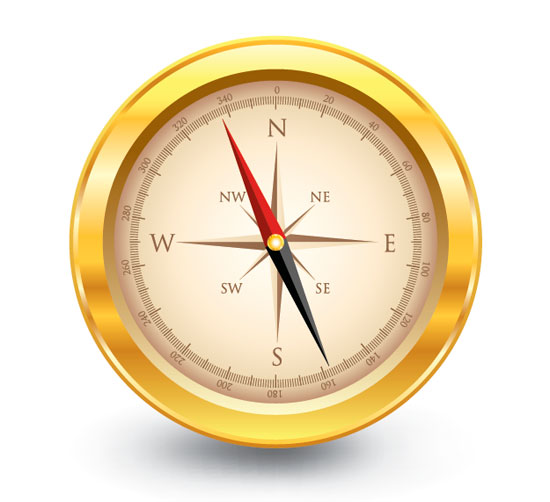 Designious
Designious is a design studio specialized in creating vector packs, illustrations, t-shirt designs for the design community. We create designs for web, print, and the apparel industry.
Weekly email summary
Subscribe below and we’ll send you a weekly email summary of all new Design & Illustration tutorials. Never miss out on learning about the next big thing.
Advertisement
Download Attachment
Translations