How to Create a Digital Illustration Using Birds

This tutorial is all about creating an illustration using just a few stock images of birds. The composition is quite simple, but with a little inspiration you can create something really nice. I would like to thank Flavius for giving me a hand with this - much appreciated!

This is the image you will create. You can view the final image preview below or view a larger version here. 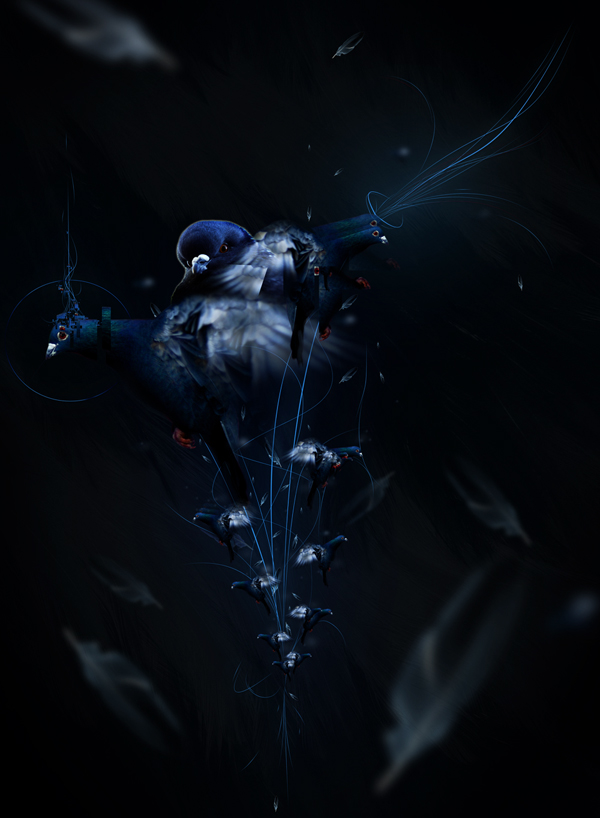 First of all, create a new document. Make the image size and resolution as you wish. Just keep in mind that if you want to print it, you will need to create it at 300dpi. Fill the background with the color #02101e. 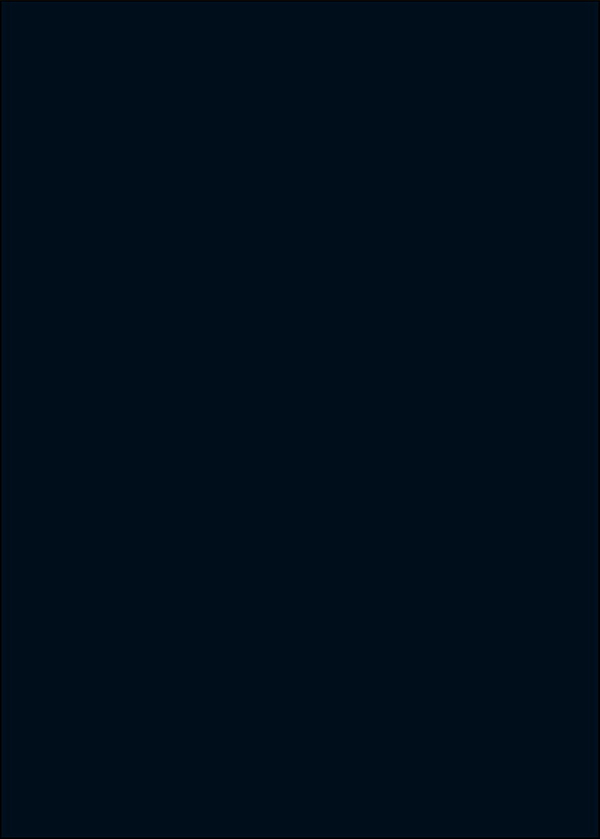 Next you need to search for the texture you are about to use for this background. The one I used is from StockXchng. Import the image into Photoshop. Resize it to fit the screen and set the layer style to Screen Mode and the Opacity to 25%. 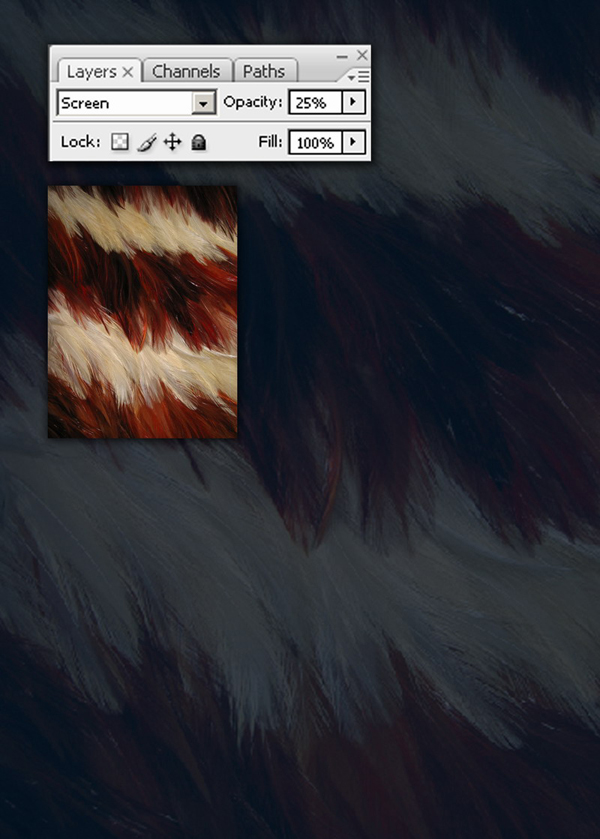 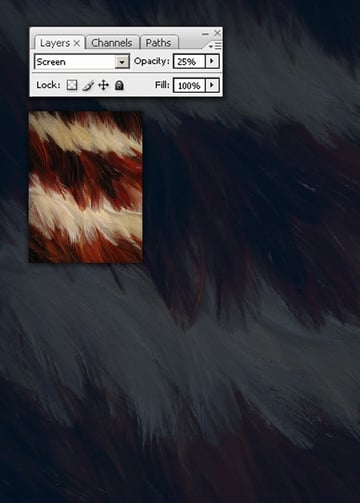 Over the previous layer create a black layer and set the Opacity to 60%. 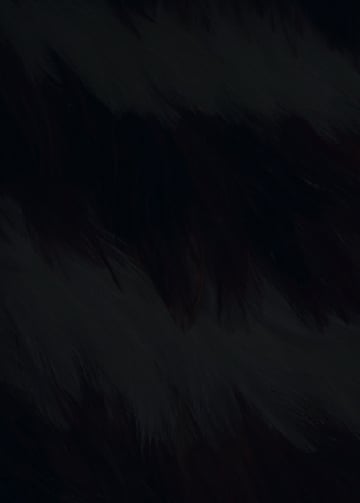 It is time to import another image. Again, I used StockXchng to find the image. Cut the bird out using the Pen Tool (P). Create a new folder and name it "Pigeons."

Place the pigeon layer in the folder and resize it. Change the angle of the pigeon, or change the horizontal direction to create a composition similar to the one shown below, or establish your own unique layout. After you have done this, select the Burn Tool (O), set the hardness to 5%, and start brushing away the edges of the pigeons so that they blend in with the background. 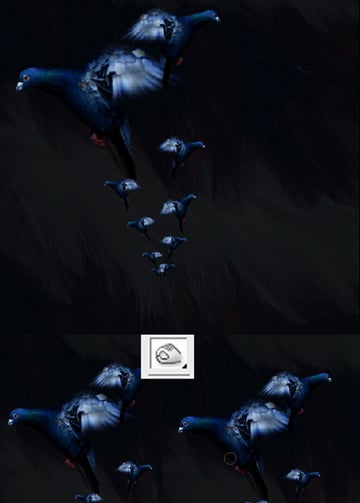 Create a new layer under the folder "Pigeons." Go to Brush Tool, select a light blue #2e82d8, and paint behind the pigeons. Go to Filter > Blur > Gaussian Blur, and set the Radius to 120.

Next, apply to the layer from Step 6 the following settings: set the Layer Style to Color Dodge and the Opacity to 60%. 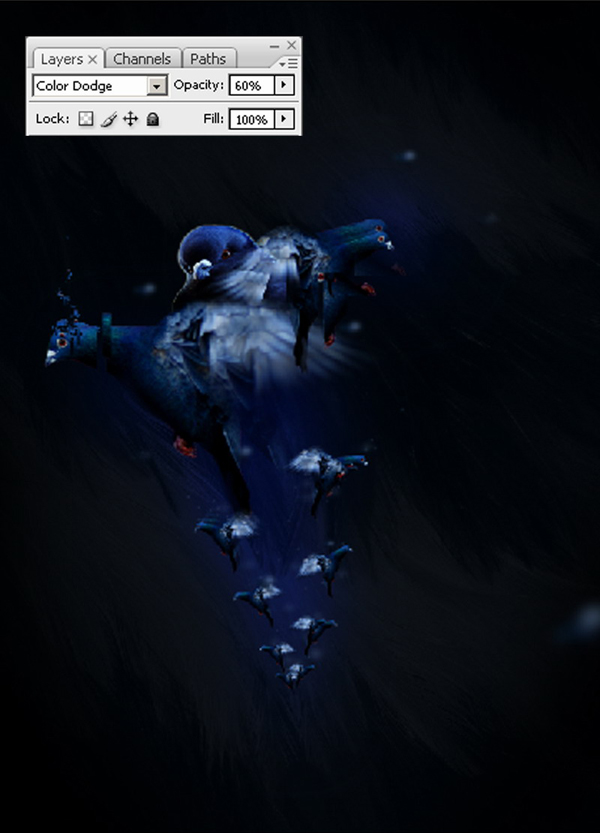 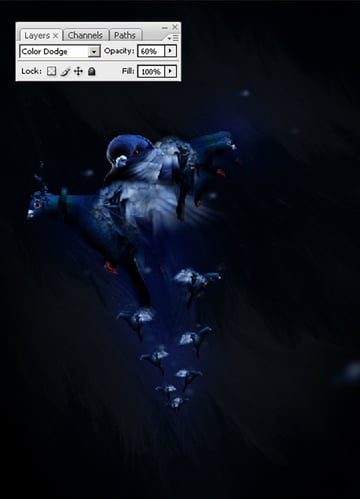 Now draw a path that you want the tentacles to follow using the Pen Tool (P). Be sure to select a light blue #2e82d8. Grab the Brush Tool (B) and set it to a small brush. I used 2 pixels. Use the settings shown below to make the Brush. Also, set the Pen Pressure effect. Repeat this step with different sized paths.

Use the same settings for the Brush Tool (B) from the previous step. Select the Elliptical Marquee Tool (M), draw a circle around the head of the pigeon in the top left, Right-click, and choose stroke. Set the Brush size to 2 pixels and the color to #2e82d8. 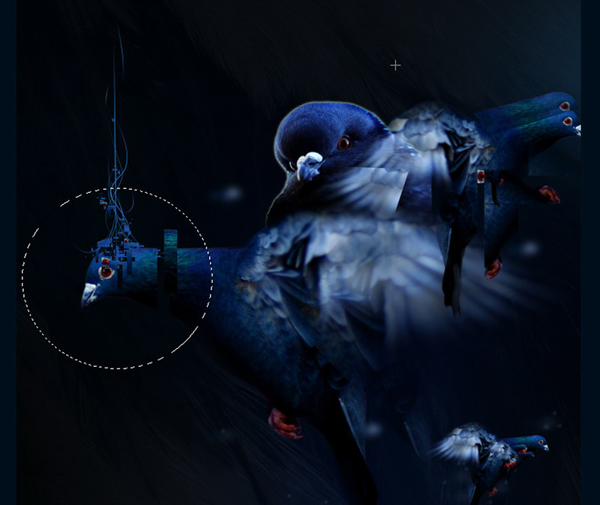 After following the Step 8 and 9, you should get something like the image below. 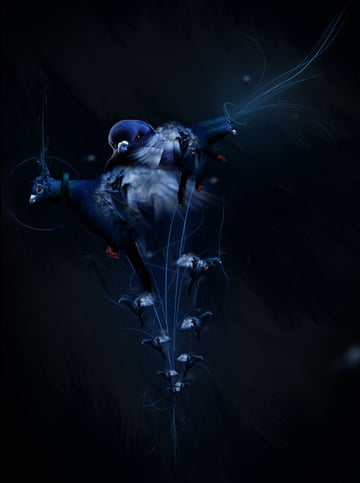 Use the settings below to make the tentacles look shiny. 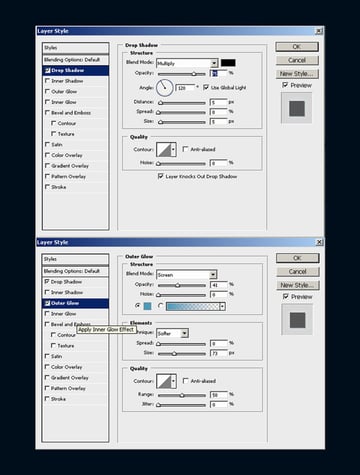 Import another image from StockXchng. Next,cut the feather from the top of the image using the Pen Tool (P). Right-click > Make Selection. Go to Select > Refine Edge and use the settings below. 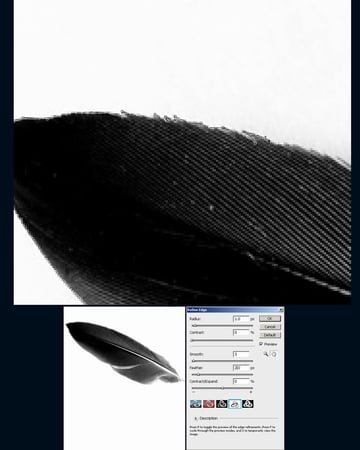 Go to Image > Adjustments > Photo Filter, set the color to a light blue #2f84d9, and set the Density to 100%. Change the Opacity of the layer, like I did. This will give you a nice effect of fading and will come in handy in our next steps. 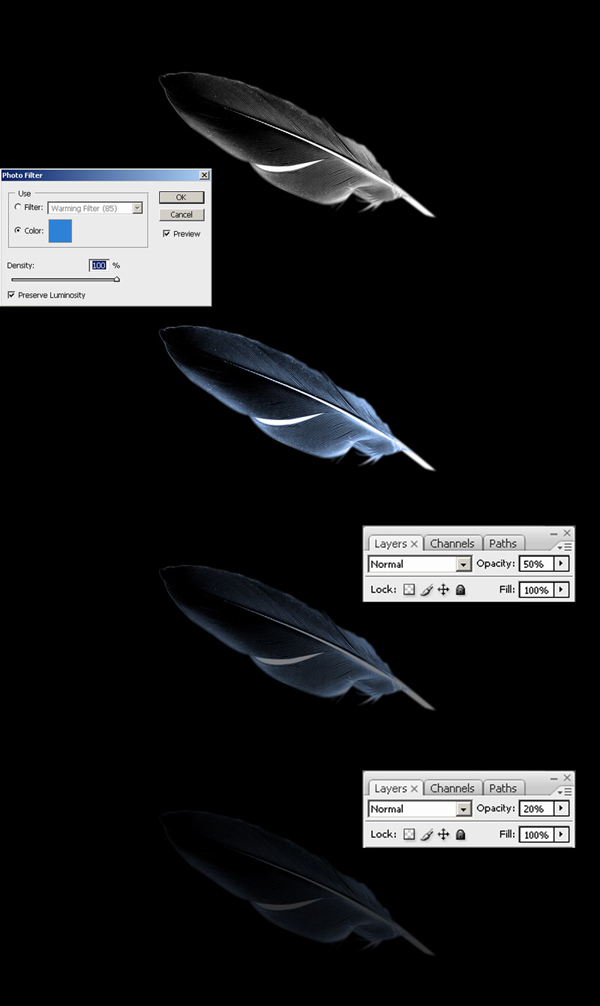 Resize the image and play with the opacity. Change the angle, repeat this a few times so it looks like feathers are falling from the birds. 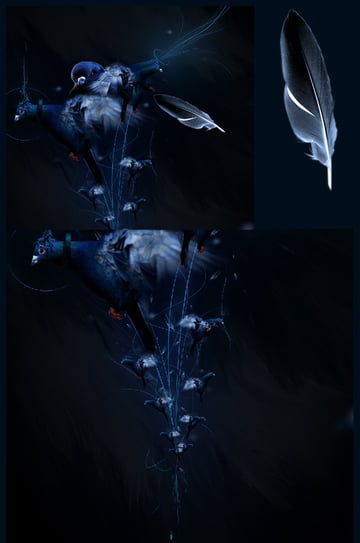 Using the first feather, and go to Filter > Blur > Gaussian Blur, then set the radius to 16%.

Set the Opacity of the layer from Step 15 to 80% and the Fill to 55%. This will make it even more interesting. 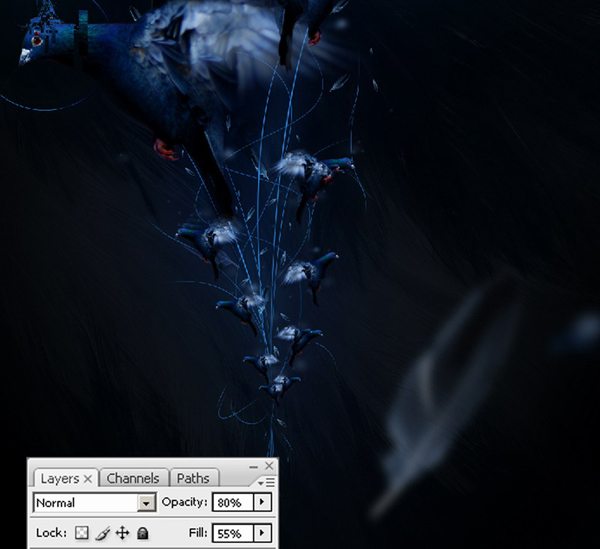 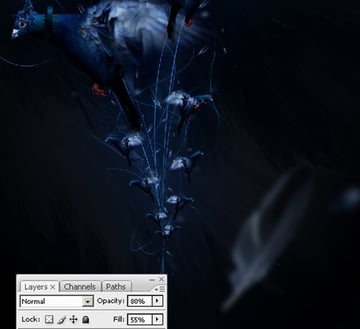 Repeat the operation from Step 15 and 16. Move the feathers, change the position, and orientation of it so you obtain something like below.

Select the feather layer from Step 13, move it into the top left corner. Next, move it so it looks like it's going out from the document. Go to Filter > Blur > Gaussian Blur and set the Radius to 20 pixels. After this set the Opacity to 80%. 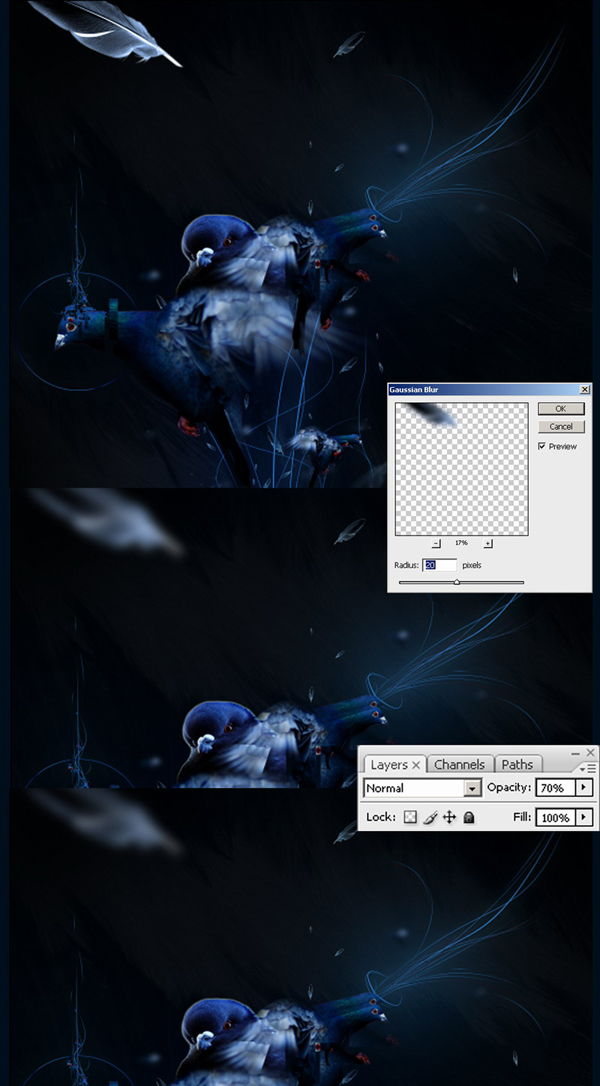 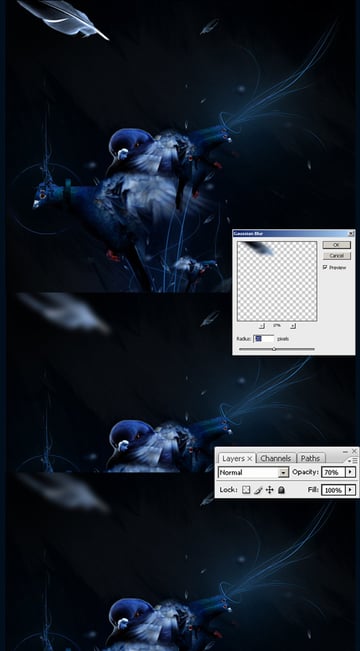 In the end you can add some color effects and give the piece your finishing touches. Hope you learned something new and had fun. You can view the final image below or view a larger version here.

Constantin Potorac
I am a freelance designer living in Romania. I discovered the beauty of design a few years ago. Since then I have dedicated my time to becoming a great designer (work in progress)!