How to Create a Dark Emotional Photo Manipulation

This is a tutorial with a simple idea: to create an emotional photo manipulation. Following this tutorial, you will learn how to blend different images to make a dark atmospheric background, modify the dress of the model, apply makeup, paint hair,  blend different objects in the background, and more - all to create a moody illustration. So, let's start!

The photo manipulation in the tutorial was created using the following stock images:

The first step is to create a new PSD. Go to File > New. I choose to work in CMYK color mode.

The next step is to create a background. Drag the Autumn Leaves background picture into the new file. Duplicate the layer and arrange it like in the first picture. Add a layer mask and erase the edges like in the picture below so it will look natural. Duplicate the layer again, add a new layer mask, and erase the edges as shown. 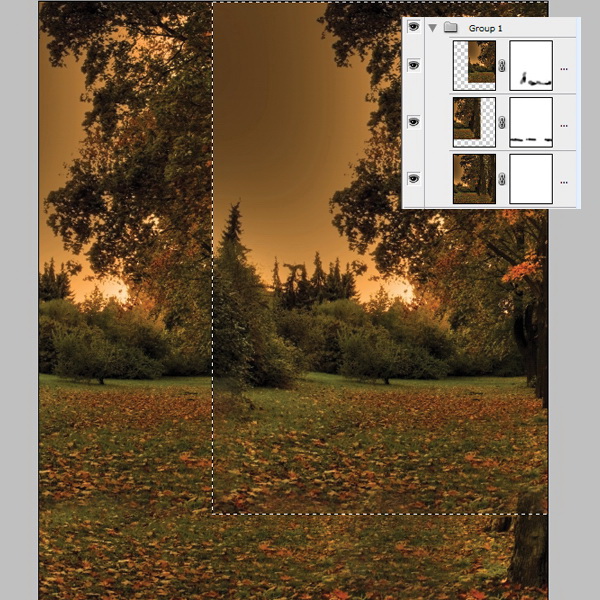 Now add an Adjustment Layer of Curves and choose 38 for the output and 27 for the input.

Drag the Fantasy Forest picture into the file. Now add a layer mask and erase on the edges using a basic, black brush as shown.

Go to the Autumn Leaves picture layer. Choose the Lasso Tool and insert a part of the leaves. Press Command + J . Arrange the new layer as shown.

The next step is to cut-out the Melancholia Model. Open the picture with the model. Select the Pen Tool and cut out the model. When you closed the path right-click and Make Selection (Radius of 0 ) and then press Command + J. 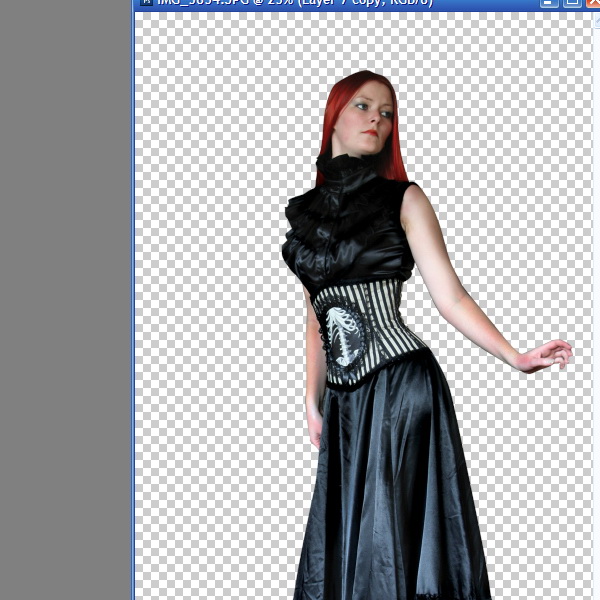 Drag the model into the main document and arrange it as shown. 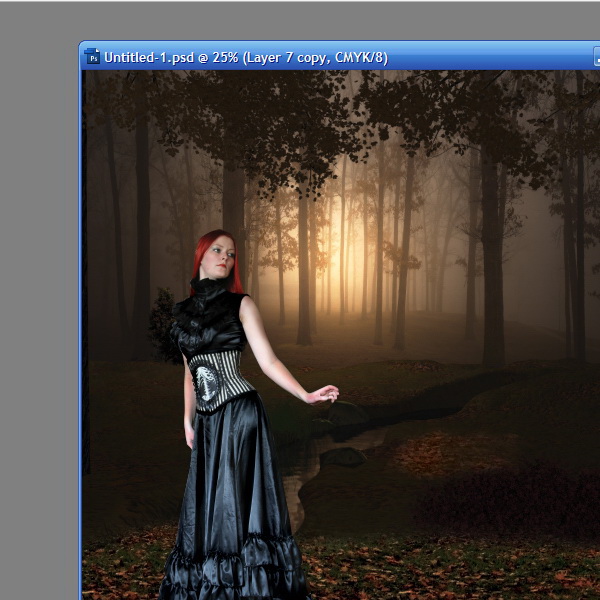 The next step is to remodel her dress, since it appears to be too short for this background. Grab the Pen Tool and cut-out a copy of the end of the dress.

Arrange the copy as shown. 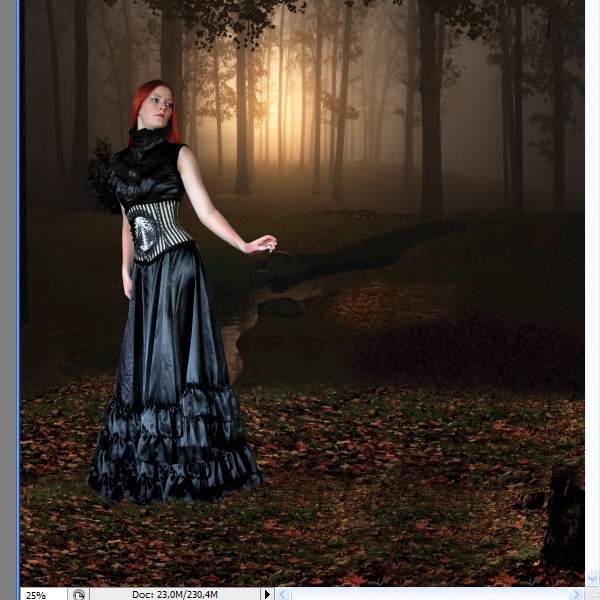 Create a new Adjustment Layer of Curves and choose 32 output and 20 input.

Fill the layer mask with a black color (Alt + backspace). Choose a basic brush, then with white color the shadow of the model as shown. 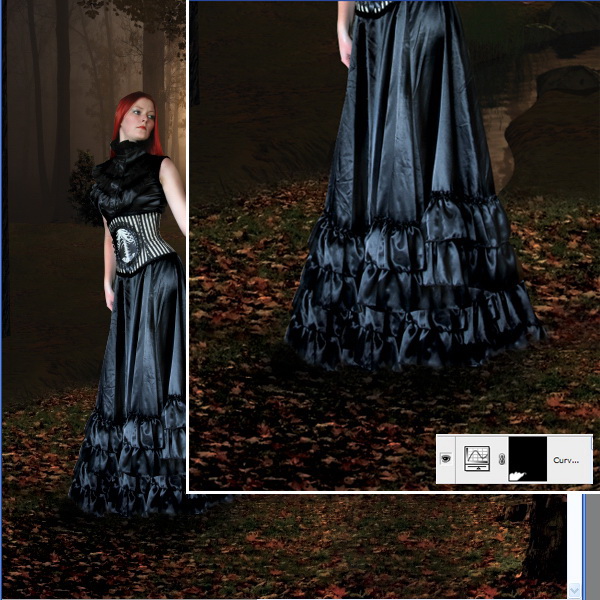 Open the creepers from the Vines file. Drag them into the PSD file, and arrange them as shown.

Don't do them on the same layer because if you don't like the result you have to erase all the hair. Once you have the right result, merge all the hair layers (press the Command button, select the layers, and then press Command + E). Next select the Burn Tool and put some shadows on the hair and select the Dodge Tool for the lights. Follow the images below for guidance.

Go to the model's layer and select the Burn Tool. Apply some shadows on the model's dress.

Go to the Adjustment Layers, create a Color Balance layer, and use these settings: 0, -19, -27. Fill the layers mask with black and with white color paint the creepers.

Drag and drop the Ravens as shown. 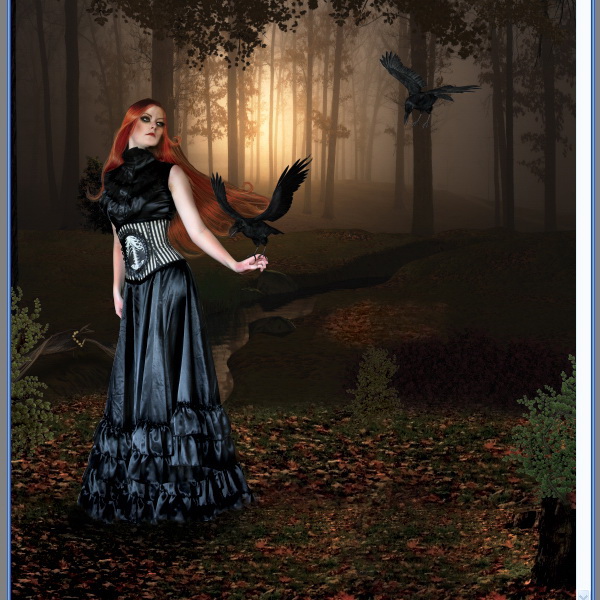 Create a new layer to paint the ravens' wings and jewels, as shown below. Do the same with all the crows. For this, use a basic round brush with smooth edges. 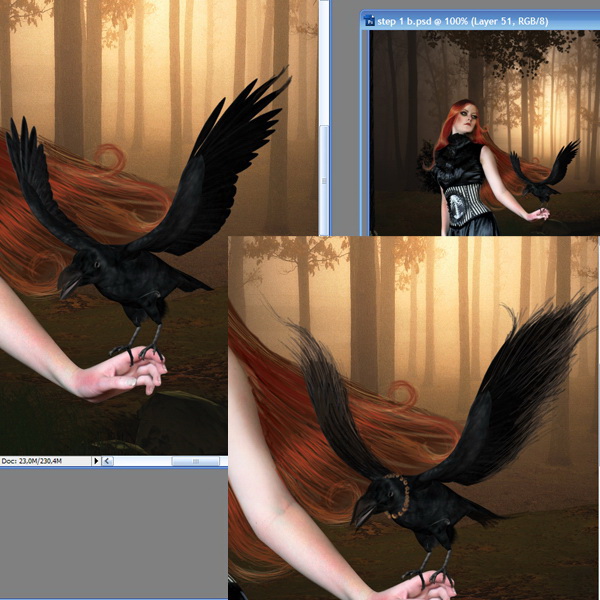 In this step, create a new layer and draw some shadows with a basic brush on the model's hand. This is a minor detail, but it's important because it makes it look natural.

Create an Adjustment Layer of Photo filter with a Density of 25%. 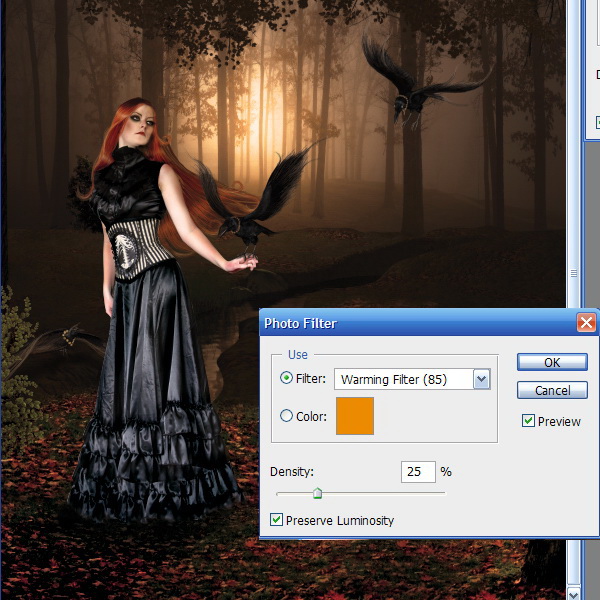 Create a Color balance layer with Levels: -18, +17, -19. Fill the layer mask with black. Paint with a basic, white brush on the model's figure.

Drag and drop some cut-out leaves into the file. You can use the "leaves.png" file included in the Plus download or an image of your own choosing.

Command-click the layer with the leaves to select them. Create a Color Balance Adjustment Layer with Levels: +67, -22, and +19. Fill the layer mask with black. Paint the leaves with a basic, white-colored brush. 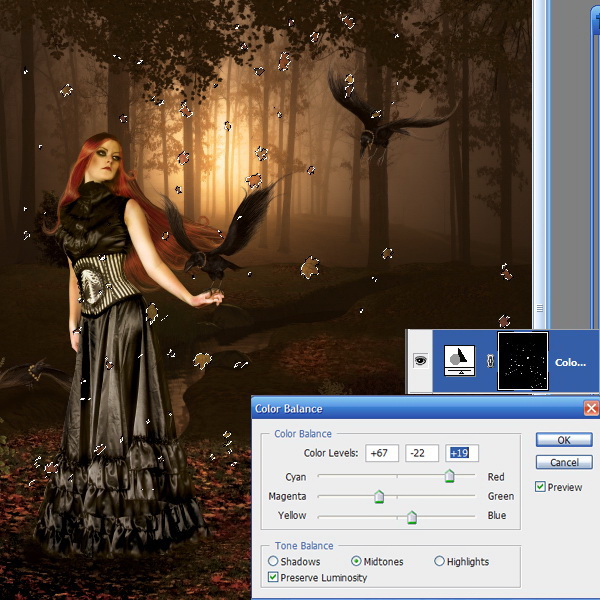 Create an Curves Adjustment Layers with Output 17 and Input 11. Fill the layer mask with black. Paint on some shadows with a basic, white-colored brush, as in the picture. 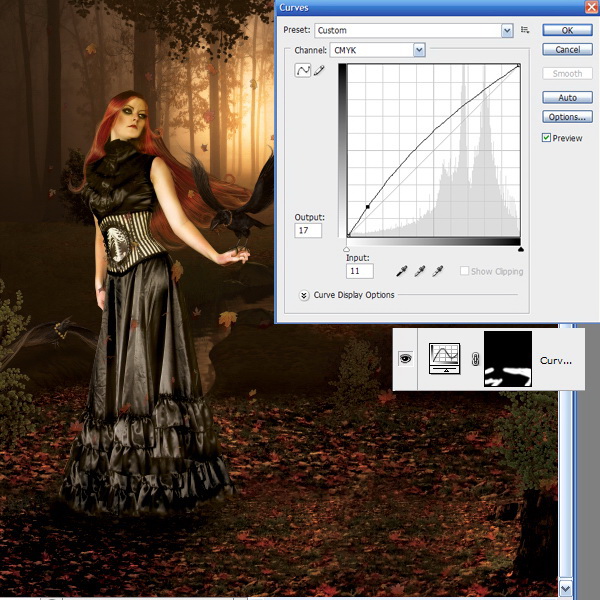 Use a new photo filter. Crete a Photo Filter Adjustment Layer with a Density of 25 %.

Create a Gradient Map Adjustment Layer. Set the Opacity to 15 %.

Sit back and look at your emotional photo manipulation. The final image is below. 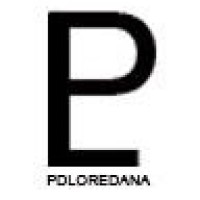 Loredana Papp
My name is Loredana Papp . I am a Romanian freelance artist with a passion for art. I love both traditional art and digital art as well.
Weekly email summary