How to Create a Colorful Parrot using Gradients in Adobe Illustrator

You'll learn how to create volume in vector illustrations using a few colors per object. I'll be bringing a sketch of a beautiful tropical bird (macaw) to life using vectors and then start the coloring process.

I start by placing my sketch onto the blank canvas going to File > Place. I've learned that by sketching, and being true to my sketch when vectoring, there's a greater chance to preserved my illustration style. Next I'll set my sketch image to a 20% Opacity, Lock it and Create New Layer on top where I'll actually be creating the vector objects.

Using the Pen Tool (P) I start the vector drawing by building the object with a few corner anchor points (no curves yet). After laying the anchor points I switch to the Convert Anchor Point Tool (Shift + C), click and drag every anchor point to reveal its vector and start handling the curve's orientation. I follow this method in order to make sure there is only two anchor points per curve path and to keep my object with as few anchor points as possible.

After drawing the main objects (body, wings, beak, eyes) I start drawing the smaller objects like the wing and head's feathers.

Once I'm done drawing every object, I'm ready to let go of my sketch and start filling the shapes with solid colors Since I'm going to be working with gradients to illustrate lights and shadows, I'm going to choose an average of those colors for the base. 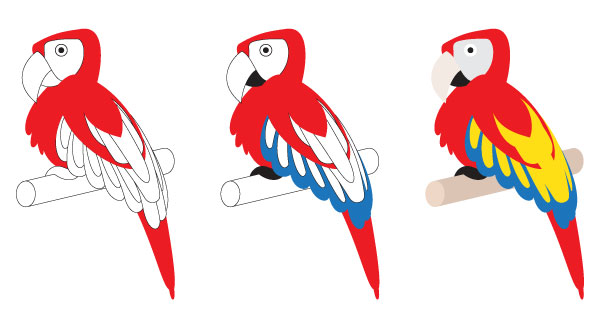 This is when the coloring process starts. I'll pick one color, in this case the red body of the bird, and I'll look for the dark and light versions of that color using the Color Picker window. You should look for the tone that is right for the subject. For example, a lighter red would result in pink, I wanted a warm color so I moved the handle towards the yellow.

After adding my variations of red to my Swatches panel, I'll use them to create the gradient swatch for my bird's body. I'll start my gradient with the light color, then the base and finally the darker red tone at the end. I'll save this gradient swatch as well since I'll be using it for all the red objects in my drawing.

When I fill the body of the bird with the red gradient the default position of the gradient is limited by the bounding box of the object (which looks kind of weird). Using the Gradient Tool (G) you can move, enlarge and shrink the gradient's range. By doing this I'll place the dark side under the bird's wing representing the shadow of the wing against the bird's body. I'll let a hint of the light color show on the top of the bird's head to illustrate the light casting upon the subject.

Using this same logic of placing the dark color of the gradients in areas that are beneath other objects, we can start managing the other red objects and its gradients position. Notice how I didn't use the dark red for the top of the wing, this is because nothing is on top and we don't need shadows here. You can see in the image that every object has a different gradient angle, you just have to play with it until you get the shadows and lights right where it needs to be.

To give a more realistic look I'm going to be adding some hard shadows on some key places. Since the shadow will have the same shape of the top object I'm just going to duplicate the top and bottom objects, move the top object to where I want my shadow to be and Intersect them using the Pathfinder panel. Duplicated objects are marked with green strokes in the tutorial image. Next I'll fill the shadow with a gradient going from 100% to 0% Opacity dark red. 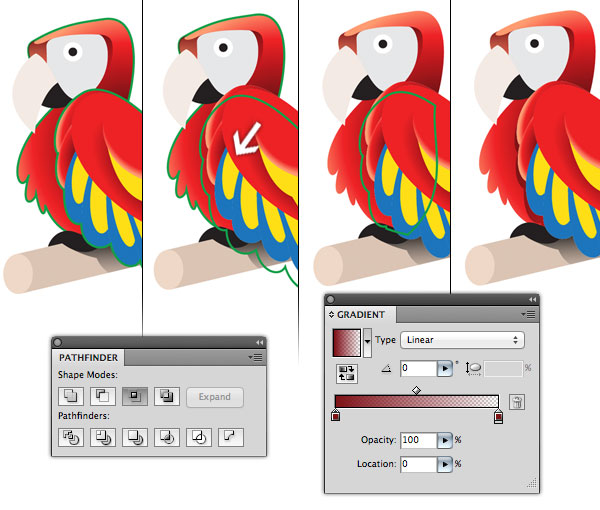 Repeat the process for the shadows in the head and tail 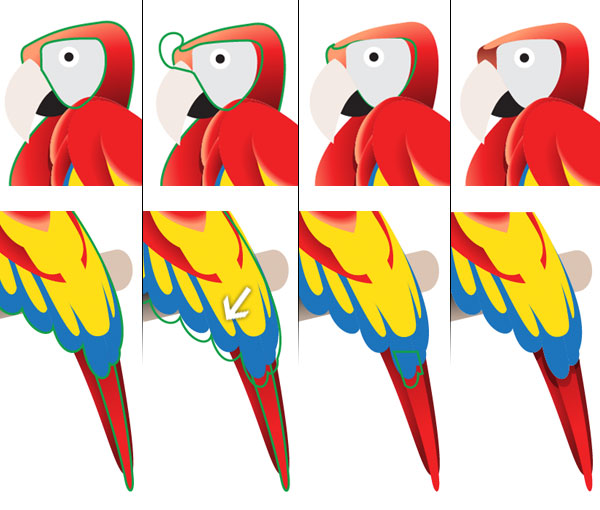 There are little details that should be added like the peak's shadow and some feather's shadows on the chest. I'll use the Pen Tool (P) to draw the shapes and the Pathfinder > Intersect to keep the shadows going beyond the chest area.

We are finally done with the red and can move on to the yellow feathers on the bird's wing. We are going to create a combination of dark, light and the base as well for this gradient. For the light color I've include a hint of green since this type of bird has some of this color spread randomly around the feathers. Using the same logic of placing shadows between overlapping objects, I fill my top yellow feathers and move the gradient to where my I want my shadow to be. 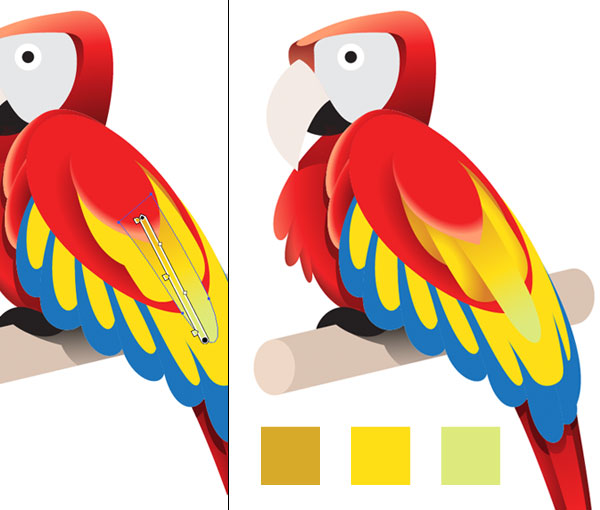 For the underneath yellow feathers we are going to be a bit more playful with the lights, yellow and green, to convey the bird's mixtures of colors on the feathers. We are going to keep our principle of using the dark end of the gradient where objects overlap. 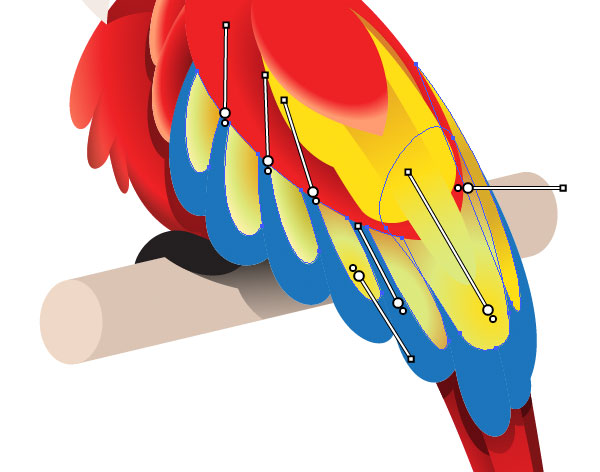 Now it's the turn of the blue feathers. We are going to do something different here. Instead of using a dark color for the gradient, we are going to use green. What I want here is to blend a little the blue feathers with the top yellow feathers, so I chose a color that they have in common. I'll place my gradient direction in order for the green to follow the yellow feathers shape as much as possible. 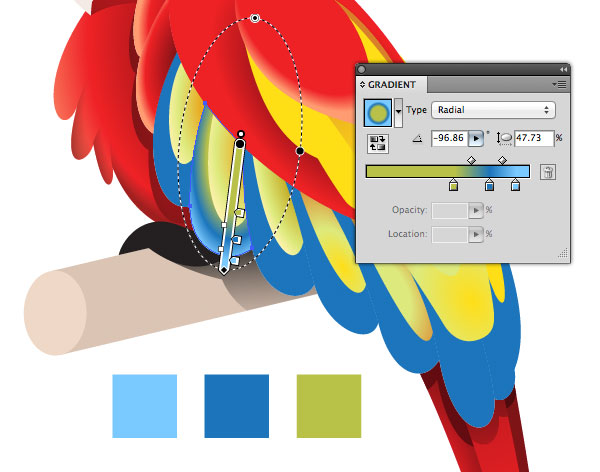 Repeat the process for all the blue feathers.

Next we'll give some volume to the bird's peak. We'll start by building our gradient with the three colors of this bird's characteristic peak: beige with brown and black at the tip. Once we are done with this gradient we'll draw a black arc on the top of the peak using the Pen Tool (P). And finally we'll draw the shine of the peak's surface by following the top curve of the peak. We've also added a little bit of light to the bottom of the peak by using a Radial Gradient from black to dark grey.

Moving on to the feathers around the bird's eye, using the eye's circle as our epicenter we are going to create a slightly bigger circle around the eye using the Ellipse Tool (L) and then another circle that covers the whole gray area around the eye. Next we'll create the two circles in the middle by selecting both circles and going to Object > Blend > Make. By default the blend is made with a Smooth Color Spacing, we want to change that to Specified Steps by going to Object > Blend > Blend Options to reveal the Blend Options window. Select Specified Steps from the Spacing drop-down menu and write 2 in the text field next to the menu. We are going to be filling each circle individually so we need to break the blend by going to Object > Expand.

Finally we want to clip the circles inside the grey shape. To do this we select the gray area, we place our shape on top of the circles by going to Arrange > Bring to Front, and with both the circles and the grey shape selected we go to Object > Clipping Mask > Make. 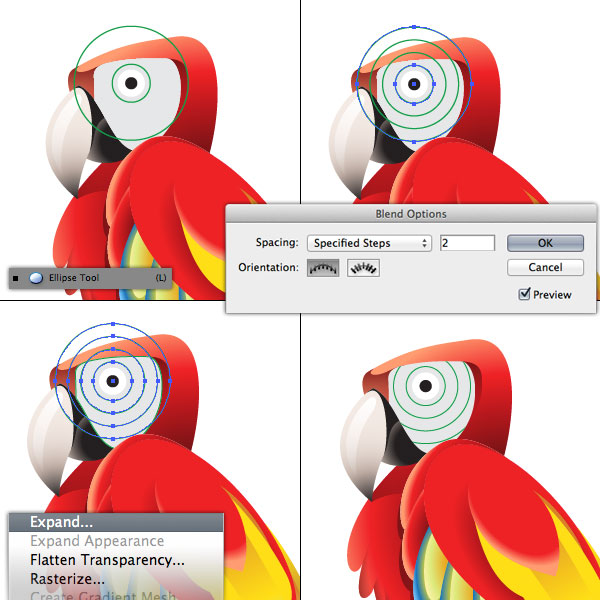 We are ready to give this feathers some love! Fill the three immediate circles behind the eye with a white to gray gradient. Move the radial gradient so the light and dark colors are opposite between circles.

For the last circle and clipping mask shape we are going to switch to a light to dark gray gradient. The reason is that this feathers are at the bottom and doesn't receive as much light as the feathers closer to the eye. 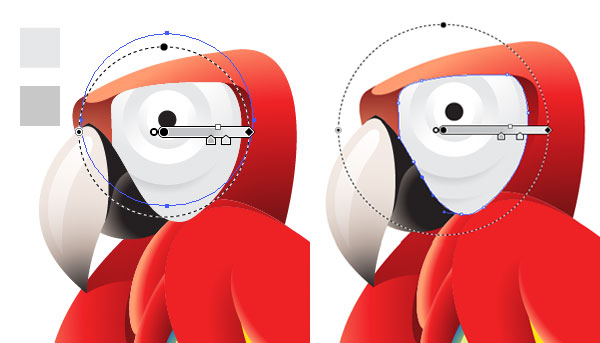 Next we're going to bring some life into the eye. Fill the white area with a light yellow. Create a smaller circle inside with the Ellipse Tool (L) and fill it with green to create the iris. Now duplicate the yellow circle and move it a few spaces downward. Fill it with a linear gradient going from 100% to 0% Opacity gray. This would give the illusion of the eye shadow upon the feathers beneath it. Create a small white circle and place it in the upper right corner of the black pupil and we're done. 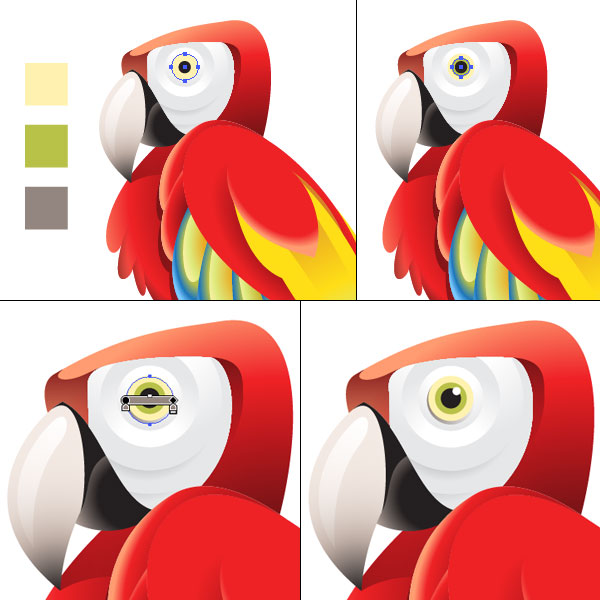 Now we're going to be adding the hard shadows for the wing's feather to give the bird the final dimensional touches. I'm going to be using the same technique I used for the bird's red body. I'll duplicate the top object, will enlarge it a little and move it a bit downward. Then I'll duplicate the feather beneath the wing and intersect the two objects by going to the Pathfinder panel Window > Pathfinder and selecting the Intersect option. I'll finally fill the resulting shape with a dark yellow since it's the shadow for the yellow feather.

The other yellow feathers in the wing will be a bit tricky. They have more than one object on top of them so we're going to have to combine the top objects first by selecting them and using the Unite option in the Pathfinder panel. After doing this we can continue using the same technique of intersecting the top and bottom object to create the each feather's shadow. Remember to darken the shadow's color a bit depending on the depth of the feather within the wing. 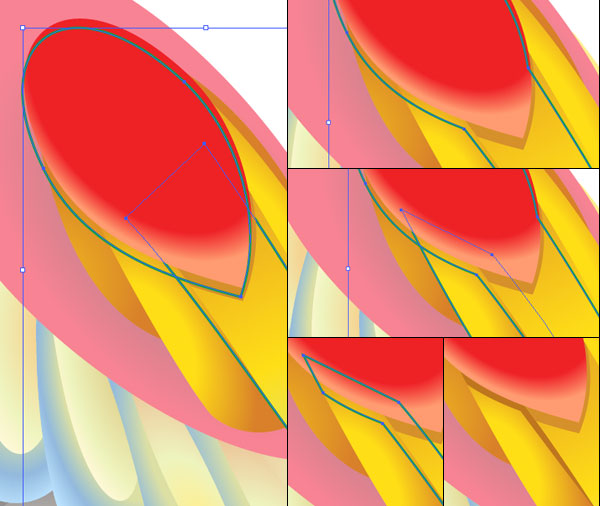 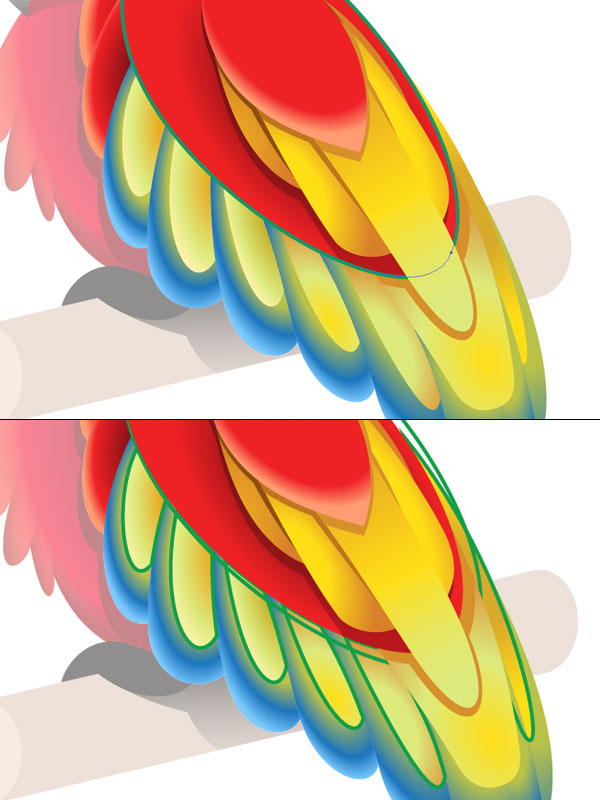 At the end we should have all of the yellow feathers shadows. Do the same with the blue feathers.

Done with the bird now the wood log looks kind of flat. I'm going to draw some lines win the Pen Tool (P) to create wood veins. Next I'll select all strokes and the main wood log shape so I can Divide the wood log into several objects using the Divide option in the Pathfinder panel. The strokes will split the log shapes into independent objects so I can apply a different fills to each one of them. I'm going to use the same gradient to fill all the objects but I'll change the gradient direction so the lights and darks of the gradients can contrast with each other and reveal the veins curves. 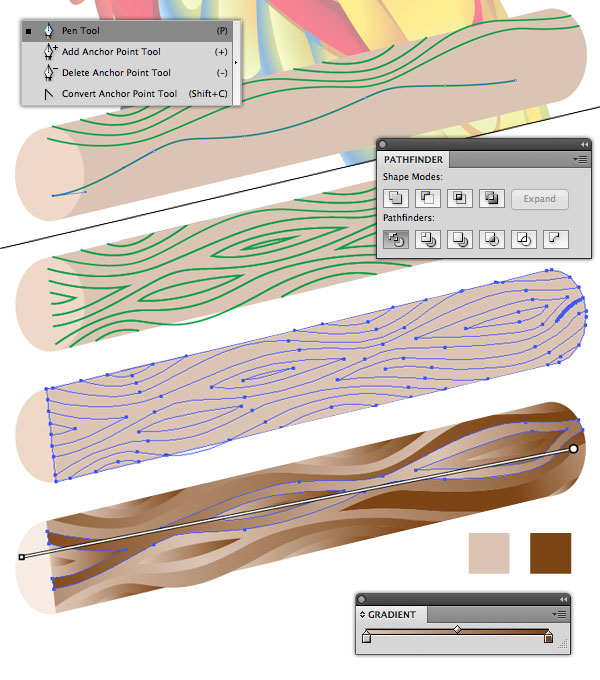 Finally the chopped side of the wood log. Fill the ellipse with a radial gradient going from dark-light-dark brown (same used in the wood's veins gradient). Draw an irregular shape with the Pen Tool (P) in the middle of the ellipse. Next duplicate the ellipse, set its opacity to 0% in the Window > Transparency panel and fill both the ellipse and irregular shape with the dark brown color we use in the previous gradient. Now blend the two objects by going to Object > Blend > Make. Go into the Blend Options window to change the Spacing to "Specified Steps" and set the steps to 5. 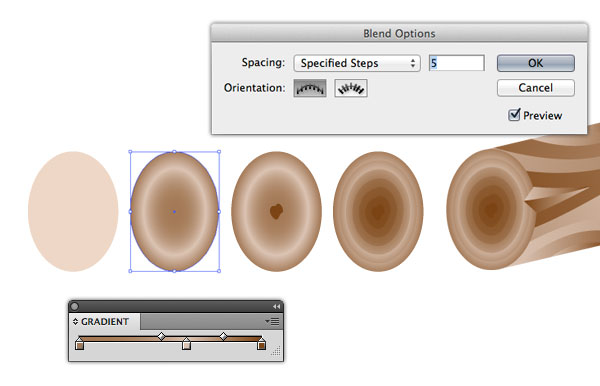 Here we have our final macaw. I hope you've enjoyed this tutorial and look out for more from me in the future!