How to Create a Cartoon Spaceship Interior in Under One Hour

This tutorial is written for intermediate Illustrator users, as basic settings are not the focus, rather the tutorial covers the overall process as this design is built. You'll walk away with a great understanding of how to use simple shapes to construct interior cartoon style scene. By sticking to simple shapes and lines, you can build a fun interior quickly. Let's get to it! 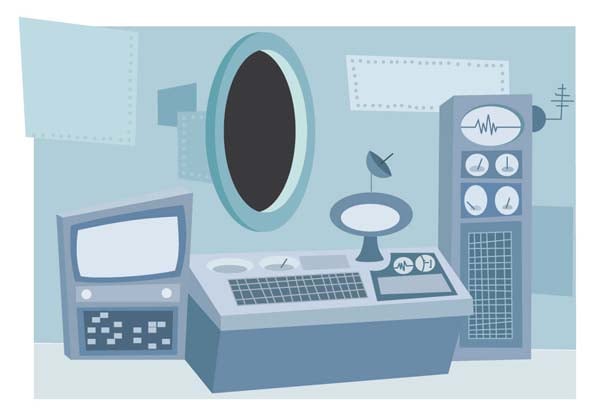 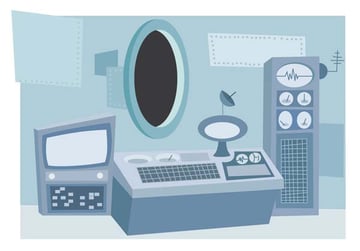 Last fall I had the opportunity to design and produce an interactive CD-ROM for children. The idea was to make an educational product, something like an English language dictionary with pictures and games.

I turned to my favorite genre - sci-fi, and I played with the idea of having alien visitors coming to Earth and wanting the user's help in learning the English language. For a backdrop, I wanted to make a spaceship interior where the action was going to take place.

I really like those Bugs Bunny and Marvin the Martian style of cartoons and I decided to go for a similar look. In the following tutorial, I'm going to show you how I created this type of backdrop in Illustrator in under one hour. I knew I wanted to keep it simple and figured that only basic shapes like ellipses and rectangles would do the trick. Let's get started!

I wanted to have a big TV set, but weird looking. I made the screen with the Pen Tool, them some dials underneath and at the bottom I added something like a strange computer interface.

Next, I outlined the TV set with a simple rectangle and used the Direct Selection Tool to drag the corners. I specifically did not want all straight lines.

It looked fine, but I decided to simulate some 3D, so I made two more rectangles and skewed them accordingly to give the TV set a basic feel of perspective. Perspective in cartoons is not always accurate, so I knew I wouldn't have a problem with that. 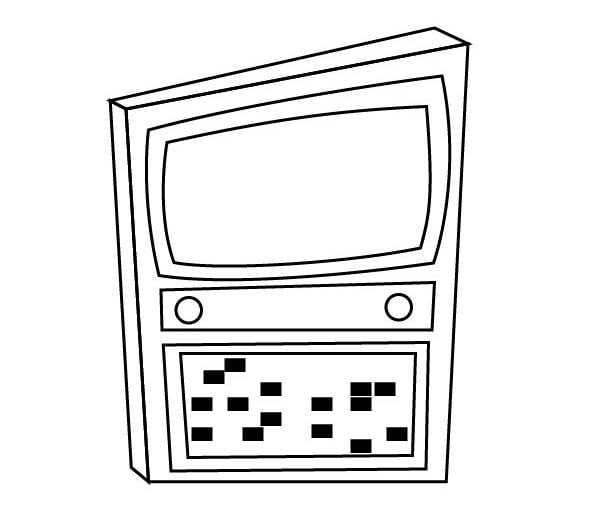 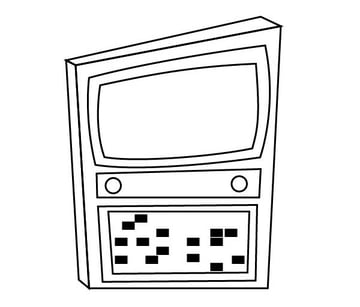 Next, I wanted to do a giant control board for the spaceship. Again, I used the Pen Tool to make a shape for the top surface of the board. I cut the left corner so that the board fit next to the TV set. I needed some rectangles to do the front and side of the board and some for the lower parts. 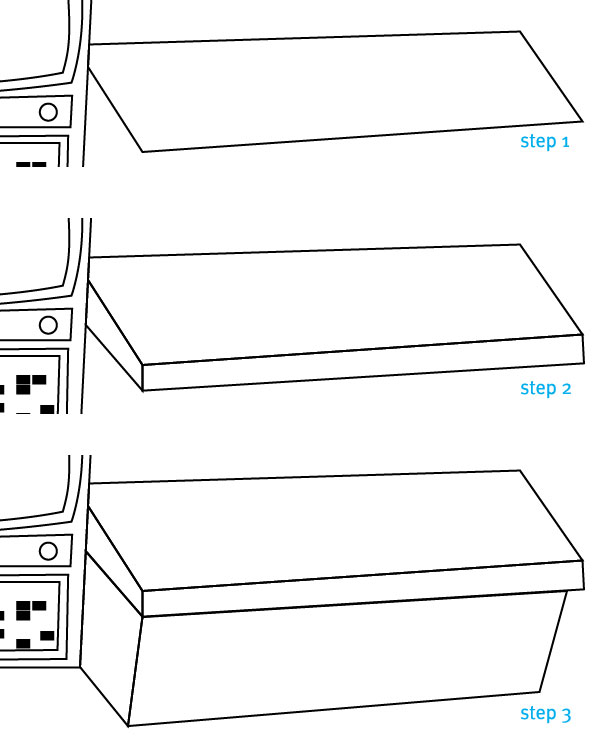 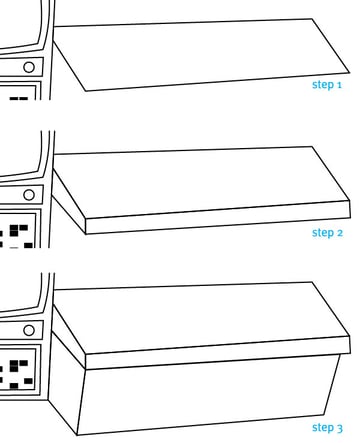 So far, so good! Time to put some controls on the board. With my favorite Pen Tool, I made a quick rectangle, drew a grid. Again to maintain the weird mood, I avoided straight lines.

On top of the grid, I made some squished ellipses and I even made a arrow like line inside one. Next, I drew some weird shapes, following the edges of the board and again some instruments with arrows and I even put a curved line, like a heartbeat line.

When dealing with sci-fi designs, I always think of ways to incorporate Star Trek or Star Wars elements, so this was the perfect place. I made a round display, resembling those old Star Trek TOS desk monitors and added a small dish on top just for fun. At this point I wasn't too concerned about intersecting shapes and elements, since I was going to color them all later and set them to back or front. 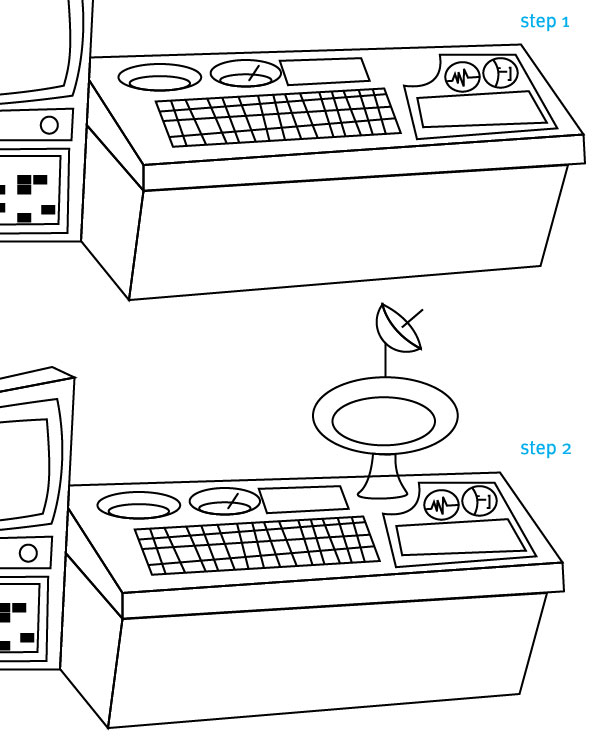 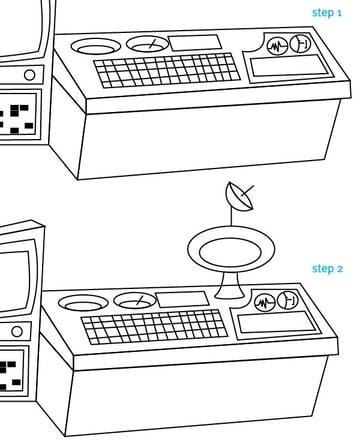 Now I wanted to put a window somewhere in the scene. I wanted to have the ability to show where the action is taking place at a given time (or game) and to be able to show different backgrounds outside the window.

I figured the perfect place for a window is over the control board. I created an ellipse, then offset it to the left and I used the Pathfinder panel to intersect the shapes. The result gave me the inner part of the window. I repeated the process by creating another, larger ellipse. This time I offset it to the right. The result was a perfect 3D looking window. 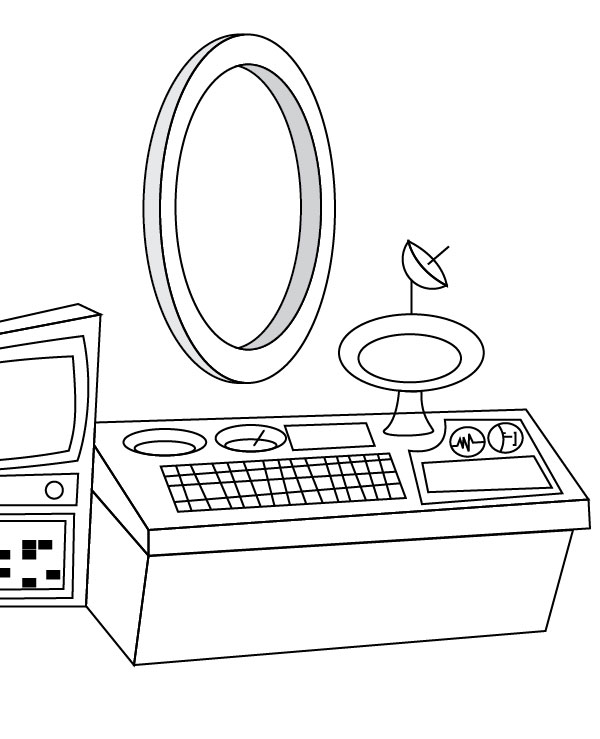 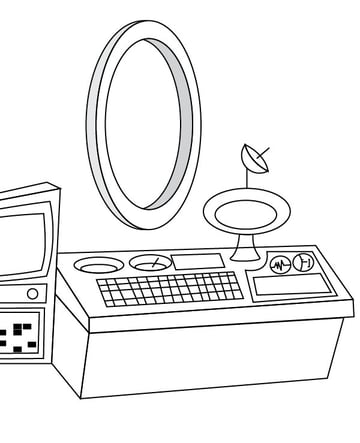 I needed something taller next to my control board to balance my composition and decided to go for a tall, retro computer. I made a rectangle for the front and another one, skewed, on the left to keep it consistent with the other elements' perspective.

I added a small antenna and some details to it. I positioned the whole thing next to the control board and ignored again the overlapping that occurred. Next I created some controls, instruments, and arrows inside the tall computer. 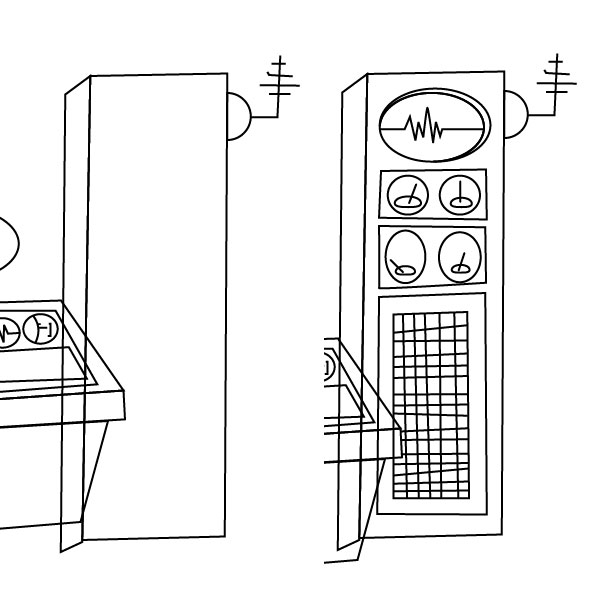 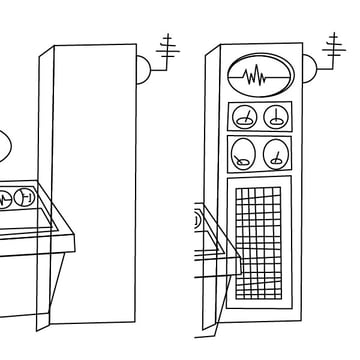 From the start, I wanted to make some of those overlapping hull panels with screws you see on spaceships. This was going to add some complexity and volume to the interior.

The window was just hanging there, so I figured I need something to connect it to. I made a shape with the Pen Tool, them drew some small filled circles. I made another shape on top, but this time left it without screws.

I like the effect and decided to do more panels. I made one on top of the TV set and skewed it a little. Next, I made similar shapes around the tall computer. I liked it so far and decided this was going to be the completed scene. 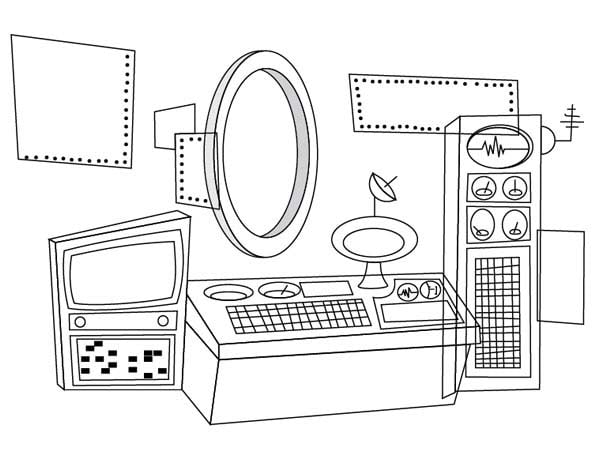 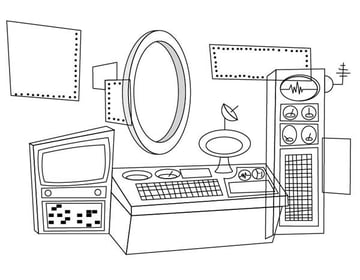 Once the scene's outlines were complete, I moved to the coloring. I picked desaturated blue palette for the project. I colored the front shapes with a lighter color. The bottom and side shapes that formed the perspective, I colored with darker blue, then colored the screens and faces of instruments in a very light blue. I made a big rectangle for the hull and put it at the back.

I made a smaller one for the floor and my interior, colored it, and I was finished. I encourage you to try and create your own settings and backdrops using simple and basic shapes. I enjoyed creating this interior and writing a tutorial about it. I hope you enjoyed it as well!

Kamen
My name is Kamen and I am a graphic designer from Varna, Bulgaria. My skills include Photoshop, Illustrator, InDesign, Premiere, Audition and Flash. In my free time I enjoy doing some digital and matte painting.
Download Attachment