When I put together designs, I usually do so in two phases - Layout and Polish. During the layout phase, I place the main objects on the page usually finishing with something that looks relatively complete. In the second stage - the Polish - I go over the design and adjust colors, type treatments, shadows, layers, and generally clean it all up. In this first of a series of tutorials on web design, we'll be looking at the Polish.

Unlike with Photoshop effects, Web design can't really be taught in a set of easily repeatable steps. If you look at most great Web designs, they are not difficult to reproduce technically. You could probably screenshot a design, put it into Photoshop and then replicate the same design layer by layer. The trick, however, is coming up with that design in the first place.

For this reason, in these tutorials on Web design I am going to try a few different techniques to convey different aspects of the process that I personally go through when designing a Web site.

Today we are looking at a site that I put together earlier this year called Not By The Hour, which is a subsite for another of our blogs called FreelanceSwitch. Fortunately when I designed it months ago, I kept a version of the PSD file before and after I polished it up, so just like in a weight loss commercial we are going to do a little 'before and after'...

Before I explain some of the things that I did to polish up the Web site, it is important to look at the before and after.

VIEW BEFORE AND AFTER

You will hear me say this time and time again, but when you design for the Web it is ALL about the pixels. One of your aims should always be to keep things sharp and clean. This means for example:

One other element to discuss here is that on the text you will see a faint gradient / stroke effect. This is achieved with two layer styles, an inner stroke of 1px and a subtle gradient. I've used this here because it is part of the FreelanceSwitch brand, and it also is quite a Web 2.0 sort of effect. It is best done with Sharp text as mentioned previously. You can see the exact layer styles in the Sample PSD below. 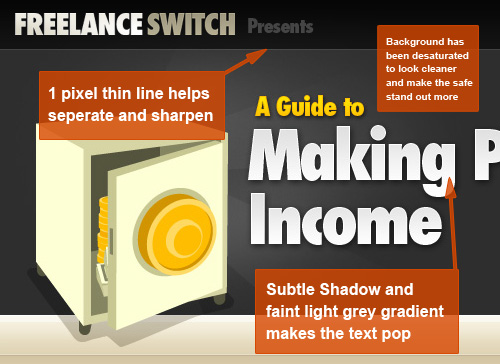 Gradients, Gradients, Gradients. Some would say they are the hallmark of Web 2.0 design, and I must admit to using them constantly in my designs. In the image below, you will see that I have added shadows and gradients to a few different places to give the design more depth.

One of the principal differences between print and Web design in my opinion is the amount of depth you need in your design. What I mean by this is that in print design, if you were to have a brochure cover with a straight, flat color, often times it will still look lovely because of the paper stock or a celloglaze that might be applied and the reaction of light to that paper/coating. So in the 'design' it might look like a simple flat color, but in the output it will have depth nonetheless. On the screen you don't have this effect.

This is not to say that you can't have flat backgrounds or panels of color in Web design, however, all the print designers I have ever art-directed to create Websites, the most common two failings I have noticed are 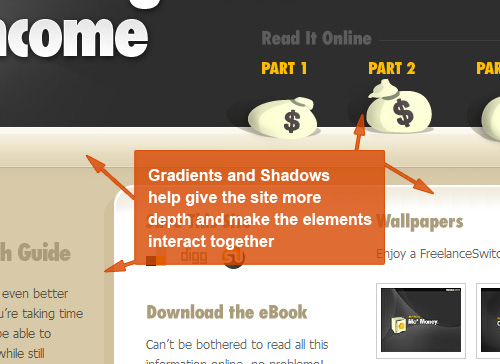 What do I mean by precedence? Well when you look at page you have to ask yourself, what do I look at first, what's next, what's after that, and so on. And why do you look at certain things in a certain order?

Visual precedence is a mix of factors: 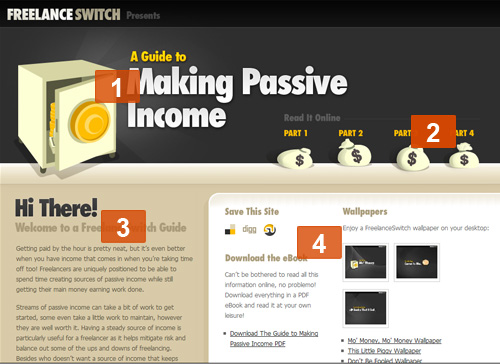 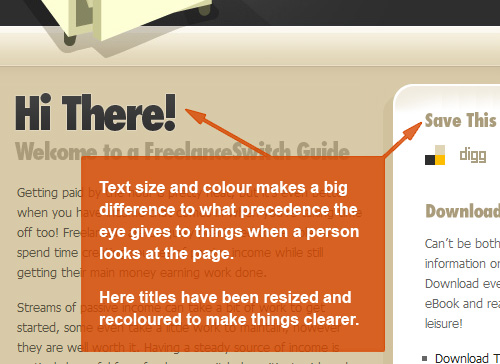 I've said it before, I'll say it again... It's all about the pixels!

In this image, you will see what appears to be a fairly straightforward gradient. In fact there are three gradients drawn in and three 1-pixel lines used. It's quite subtle, and arguably doesn't make that much difference, but in my opinion every detail counts towards the end. 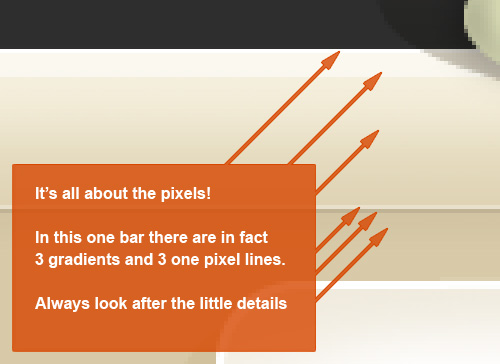 Someone in the comments asked about Web 2.0 sorts of styles. Here is a simple effect where you give a 1- or 2-pixel outline and then a faint gradient for a background. If you hadn't already noticed it already, you'll start to realize it's all over the place, possibly a little overused, but kind of nice anyhow. 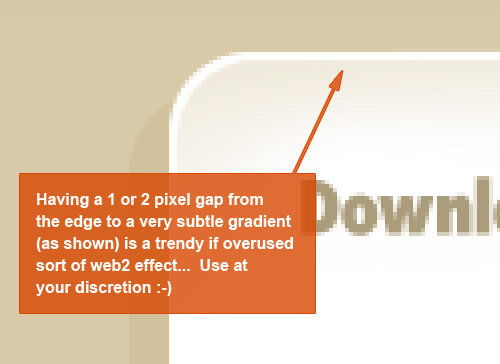 In this image, you can see how sometimes during the polish you may even change the actual information on the page. In this instance, I decided that although it was more infromationally rich having all the titles for the different parts underneath the money bags, it looked so messy I didn't think it was particularly informative - though this is somewhat debatable. So instead I removed the excess brown on brown text and replaced it with bold yellow on dark grey, which because of the contrast leaps out. 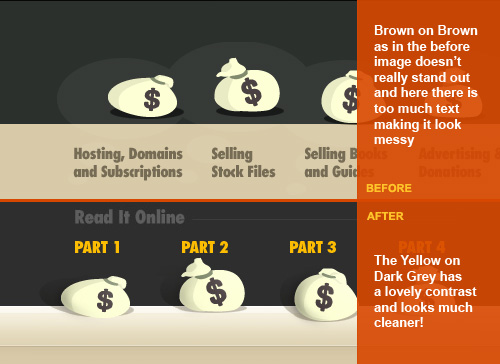 And there you have it!

So there is my first Web design tutorial. Please let me know in the comments if this is informative. It's challenging explaining Web design! Also bear in mind that my style of Web design is of course my taste, particularly as I am my own client in 99% of projects I do these days :-)

The next time I have a Web site to design, I am planning on recording the whole thing with a screen capture program then speeding it up into a few minutes. So you can look forward to that! I think it's going to be pretty cool, though I'm a bit nervous because like all designers some days it comes easy, and some days it's a blank slate inside.

Anyhow hope you enjoyed the tutorial. Please give it a Digg if you did!

One quick note about this PSD, I haven't labeled any of the layers or grouped them. This is quite literally the PSD that I built the site off that I've zipped up for you to look through. The design and contents of the PSD are provided purely for instructional purposes. Copyright for the design and illustrations rests with the respective owners. Please don't use elements of the design elsewhere.

Download the PSD for this tutorial
DesigningAdobe PhotoshopInterface Design
Did you find this post useful?
Yes No
Would you like to provide feedback (optional)?
Cancel Submit
Want a weekly email summary?
Subscribe below and we’ll send you a weekly email summary of all new Design & Illustration tutorials. Never miss out on learning about the next big thing.
Sign up

Collis Ta'eed
Hi I'm Collis and I work at Envato making awesome websites and generally wandering about the internets!
Scroll to top