This tutorial will go over the techniques used to draw a realistic guitar from scratch using the free vector program Inkscape. To complete this tutorial, you should already have a basic knowledge of vector tools, such as: the Pen tool, Edit Path Nodes tools, and you should be familiar with the Fill and Stroke toolbox. Let's get rockin' vector style.

Have a look at the image we'll be creating, or follow the link for a larger version. 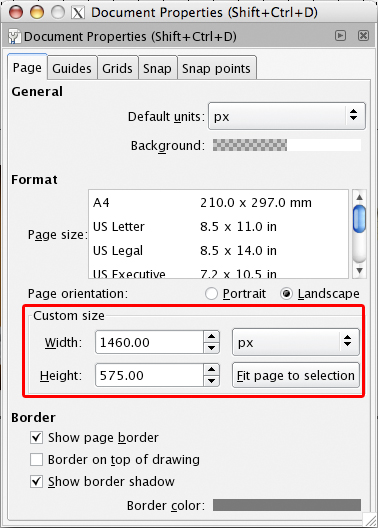 Next we need to find a stock image that we can use as a template. I got this image from stock.xchng.

Now resize the template image so that it fits inside your page border (remember to hold Command while resizing to keep the image proportional). Now use the Pen tool (Shift F6) to trace around the outside of the major pieces of the guitar: body, neck, and headstock. I put each piece on a different layer. I have reduced the opacity in the image so you can see how I traced the edges. 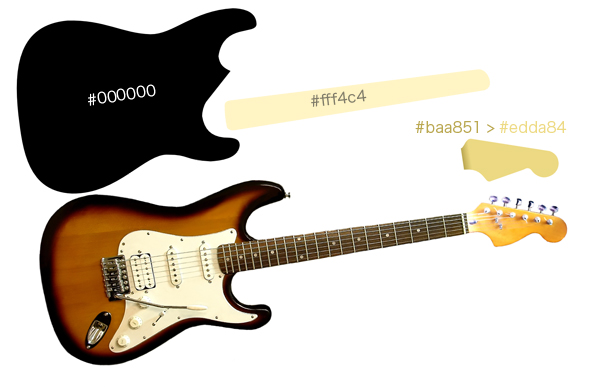 Now we can start to add some detail. Using the Pen tool, trace around one of the tuner knobs. I created it in two parts; a rectangular shape with rounded corners, and rectangle. After you have one, you can group the two pieces together, then duplicate it five more times to create the others.

The next step is the draw the pickguard. Simply use the Pen tool to trace around the outside of the pickguard in the template image. To create the small screws on the pickguard, use the Circle tool to draw one very small circle, then duplicate it to create the remaining screws.

Now it is time to draw the saddle. In my opinion, this is the hardest part of the whole drawing, but luckily, the entire thing can be draw with simple shapes. The only shapes I used were rectangle, rounded rectangle, and circle. Once you have created one part, you can easily group and duplicate it to save time. 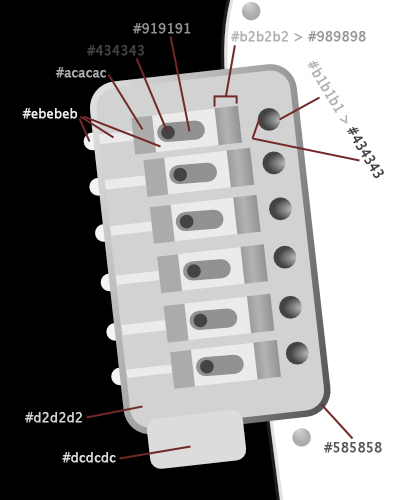 Now we will draw the pickups. This is done with a rounded rectangle, and eight small circles; pretty simple.

Next is the adjustment knobs. First draw a large circle, then a smaller circle in the center of it. Use the Text tool to draw the numbers 1-10 and rotate them so that they are all facing away from the center of the circle. Try to space the numbers evenly, but make sure to leave a significant gap between numbers 1 and 10.

To draw the pickup switch, simple duplicate the screws from the pickguard and resize them, draw a line between them, then draw a triangular shaped object with the Pen tool. Also, give it curved edges with the Edit Path Nodes tool (F2). 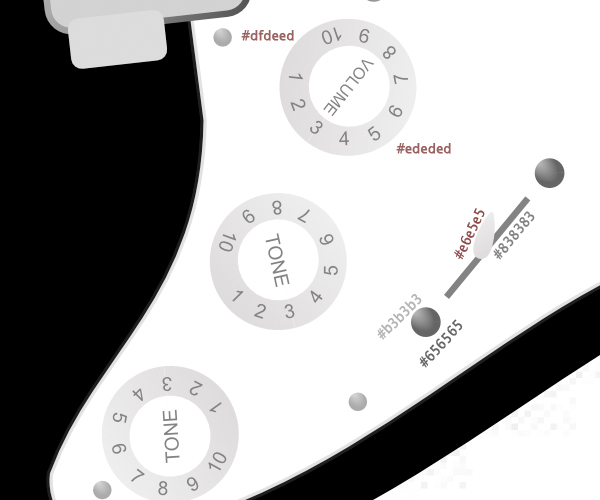 The next step is to draw the hole where the chord from the amplifier plugs into the guitar. This is kind of a strange shape, so do your best to trace it and add each little element. For the screws, you can duplicate the same ones you used earlier on the pickguard and simply resize them.

The tremolo is the last of the hardware to be added to the body of the guitar. It is very simple to draw. First, make a circle at the bottom of the saddle we created earlier. Next draw a long thin rectangle that begins at the circle, and extends to about the edge of the body. At the end of that rectangle, you can use either the Pen tool or Circle tool to draw a long ellipse.

Now we will move up to the headstock to add the fine details. The first thing you need at add is the tuners where the strings attach to the headstock. This is simply done with two circles, one larger than the other. Group and duplicate them until you have six total. 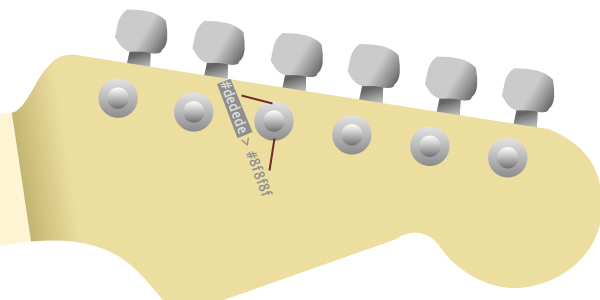 The other details on the headstock are very simple. First, draw a triangular shaped object with the Pen tool and use the Edit Path Nodes tool (F2) to make the corners round. 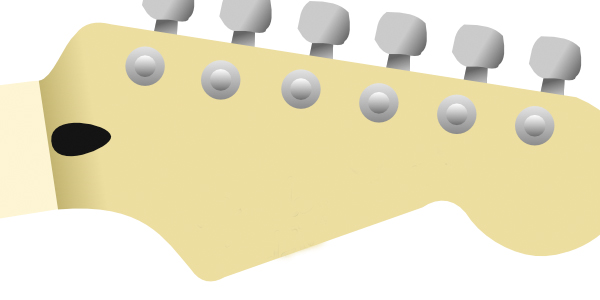 The remaining details on the headtock are all text. You can see the text that is on the guitar in the screenshot below. You may want to use a nice font for your logo. I used Banff-Normal. 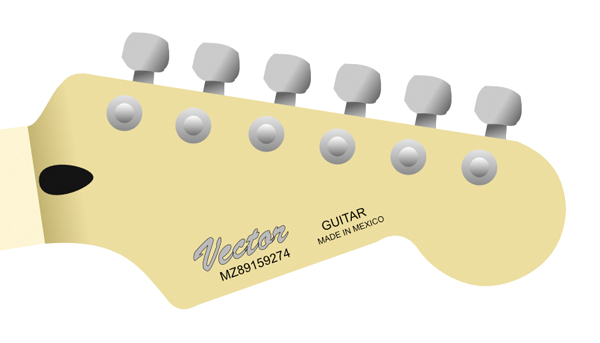 Now we need to add the frets to the neck. With the Pen tool, draw a line and duplicate it until you have twenty-one total. To get the correct spacing, you can hide the neck layer and place the frets you created on top of the frets in the template image. Don't forget the add the thick white nut at the top of the neck, which is next to the headstock. 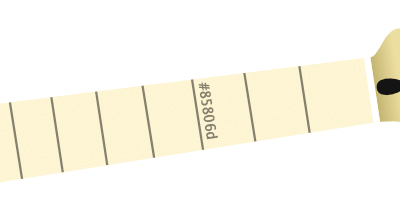 Next we need to add the strings. Using the Pen tool draw six lines from the headstock to the saddle. See the image below to discover where they begin and end. To portray size, I drew them all the same color, but simply changed the opacity as the strings get smaller. Starting with the thickest top string, the Opacities are: 100%, 75%, 60%, 45%, 35%, and 25%. In the picture below, the strings are drawn in blue in the insets to show where they begin and end.

Now we need to add lighting and shadow effects to the body of the guitar. Duplicate the body and change its fill to transparent and set it's stroke to size 10px. Also, fill it with a gradient, one side should be transparent and the other should be white (#ffffff).

Add a Blur of 2.0. This is easier to see if you change the color of the body to a similar color blue, as shown below. With that layer still selected, go to Object > Pattern > Object to Pattern. Now duplicate the body again and set its fill as the pattern we just created. Also, make sure it has no stroke.

This step is going to be carried out the same as the last step, except for a few changes. Duplicate the body, make sure it has no fill, set it's stroke to 10px, then add a gradient with one side transparent and the other side black (#000000).

Add a Blur of 2.0. This time the gradient should start on the opposite side from the white gradient. Create a new pattern from that layer. Duplicate the body and make sure it's fill is the pattern we just created. Also, make sure it has no stroke.

You can easily change the color of your guitar to whatever color you want. If you want to add a sunburst style, you'll need to do a little more than just change the color. Just like in the previous two steps, you'll need to duplicate the body, set its stoke to black, and Blur it. The key part is that you have to create a pattern. If you don't, the blur effect will go outside of the guitar. The final image is below, or follow the link for a larger version. 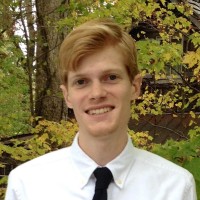 Nick Roberts
Nick is a web designer who enjoys sharing his designs with the community and allowing others to download, use, and learn from his work.
Weekly email summary