Retrofuturism is a topic that has always fascinated me. In this tutorial, we'll go through the steps of recreating my own experiment in this style. After making the 3D typography in Illustrator, we'll use Photoshop to create an out-of-this-world digital illustration on the topic of space exploration.

As Wikipedia puts it, "retrofuturistic design is a return to, and an enthusiasm for, the depictions of the future produced in the past (most often the 1920s through 1960s), both in science fiction and in nonfiction futurism of the time, which often seem dated by modern standards." I love dated!

This is what we're doing; a retro interpretation of the future based on the theme of space exploration. The usual suspects on this matter are retro rockets and sleek satellites. How could you design a retro space scene without a funky rocket, anyway? To top things off, we'll add the famous Sputnik 1 sattelite.

Open Illustrator, start a new web document and get this font, called Airstream. It's a retro font that works well with the desired style. It's important to understand that it's pretty difficult to get an identical 3D result to mine. Typing in the same numbers might not work well enough, so you may have to make some adjustments on your own. My font size is around 700 pt, which allows for more accurate results in 3D mode (larger is better). Keep in mind though that this can put a strain on your system. The font color is 5d2239.

It's time to add the 3D effect. Go to Effect > 3D > Extrude & Bevel. Use approximately the same settings as shown below. Make adjustments if necessary and copy the letter (Command + C). Don't close the Illustrator file just yet. 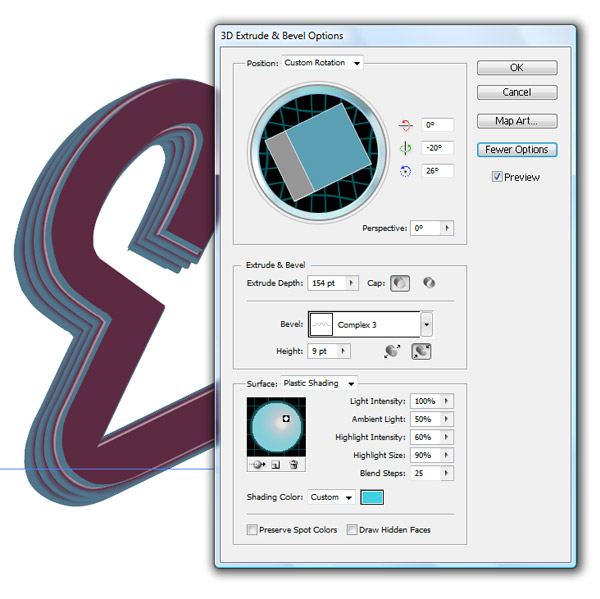 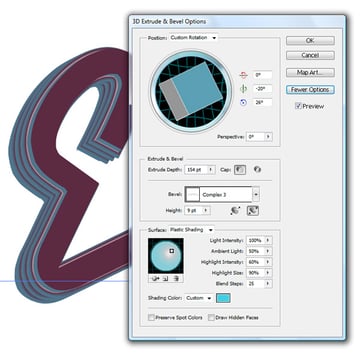 Start up Photoshop and get this galaxy photo. I downloaded the maximum size, so the Photoshop project size corresponds to the XL format of this image. Go to Layer > New Adjustment Layer > Gradient Map and apply a three color map: pink (ab6984), blue (253039) and black. 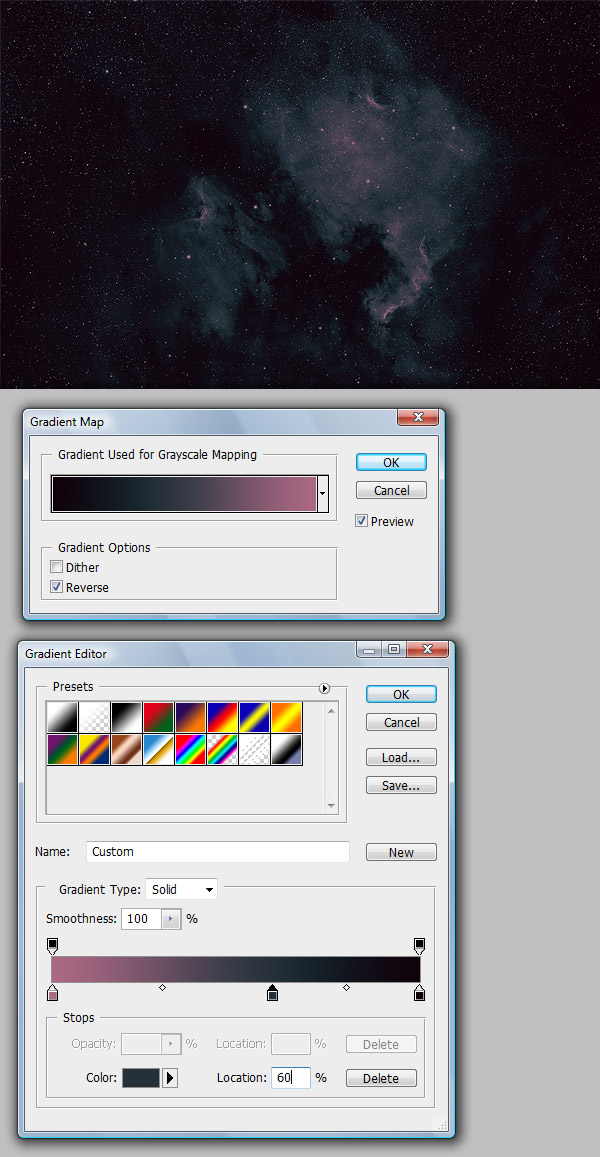 Paste the letter (Command + V), and using the Magic Wand tool (W), make a selection of the face of the letter. Go to Select > Modify > Contract. Use a 10 pixel value to make the selection smaller. 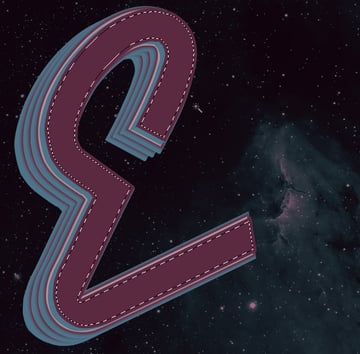 Fill the selection with white in a new layer and apply a Bevel and Emboss Layer Style. Use the settings shown below.

As a Clipping Mask applied to the newly created white face, then paste a duplicated version of the background (with the Gradient Map included). Change the image's Layer Opacity to 50%. That will give the impression of semitransparent glass.

Go back to Illustrator and select the letter E. Open your Appearance Panel and change the 3D settings by double-clicking on the 3D effect found in the menu. Just change the Cap to the second option: Turn Cap Off. This imitates a see-through effect. Copy it again (Command + C) and for the sake of your RAM, close Illustrator. 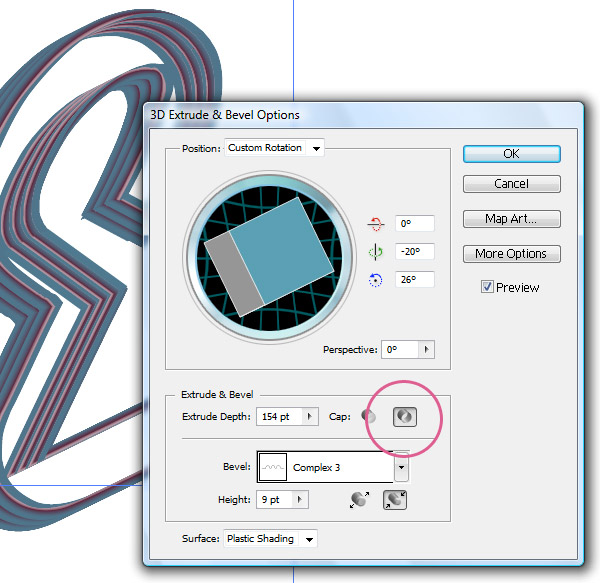 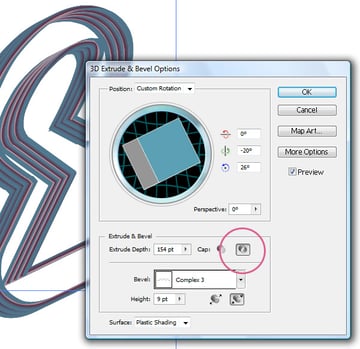 Paste it as a Clipping Mask, just like in Step 6. Change the Layer Opacity to 40%.

Make another Clipping Mask Layer and paint with a large, soft brush a white reflection. Naturally, I did this after creating the rocket, but for the sake of finishing off the letter in the tutorial, we'll take care of that now. Keep the rockets positioning in mind while doing this.

Make a selection (Command-click on the layer) of the whole letter and make a new layer on top of all the other layers, without being clipped. Draw a subtle shadow with a dark color on the opposite side of the reflection. 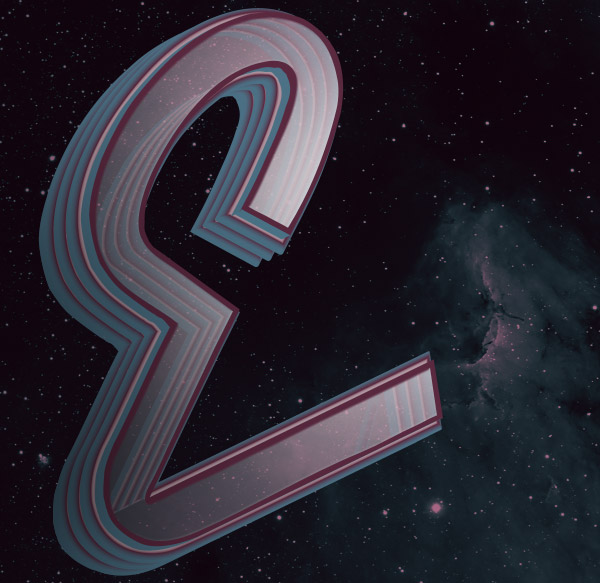 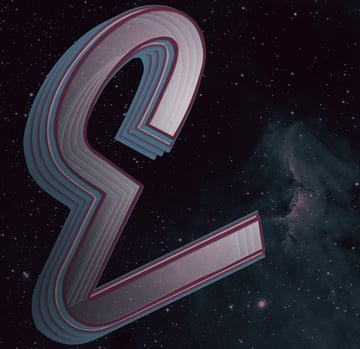 Repeat this grueling process to the rest of the letters...

I use a Channel Mixer quite often. It's a great way to achieve certain effects and manipulate the colors in your design. In this design, we'll use it to give dynamic intensity to bright colors. White values will now glow and give the impression of heat. Boost the Red and Green values to create a color excess of nearly 200 and 145 percent.

Apart from creating a fire effect, we're using this to give the design an authentic vintage feel. An important part is the absence of pure black.

Working hand in hand with the channel mixer (alter visible / invisible), create the rocket's stream. To do this, I used a pen tablet which enables me to use pen pressure. With a large, soft brush and pen pressure enabled, paint a stream. Start on the top with a gentle touch, and with one swift stroke and gradually more pressure, drag the rest of the body of the stream. Fade out the end with the Eraser Tool (E). Continue swatching colors found in the scene with the Channel Mixer disabled, in this case, blue (4a6d82).

Alternatively, you could create these with a stroked path. Create a path that is double the size of your desired length with the Pen Tool (P). Select a large soft brush and set the brush size according to the thickest part of the stream. Then stroke it by right-clicking on the canvas and selecting Stroke Path. Check the Simulate Pressure box, and stroke it. Now just erase the extra half with the Eraser Tool (E) starting from the thickest point. It's not exactly the same outcome, but similar.

The great thing about this adjustment layer is that it gives a whole new intensity to white values. It adds a glow and creates the impression of heat. Make two more streams with white and violet (66445b).

More blue to cool it off a bit and even a lighter blue shade. 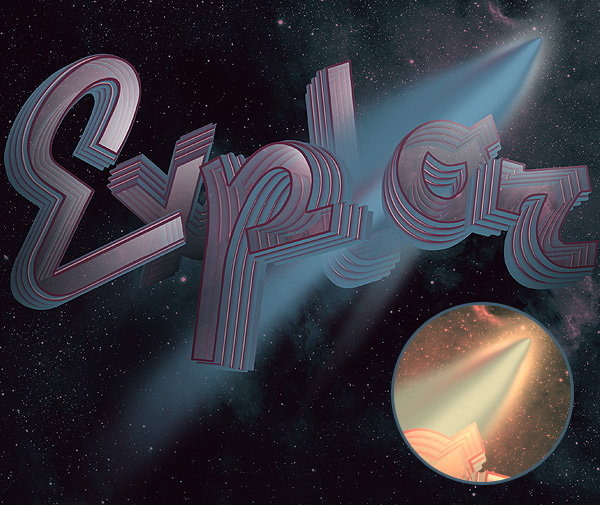 And the final touch, more white. 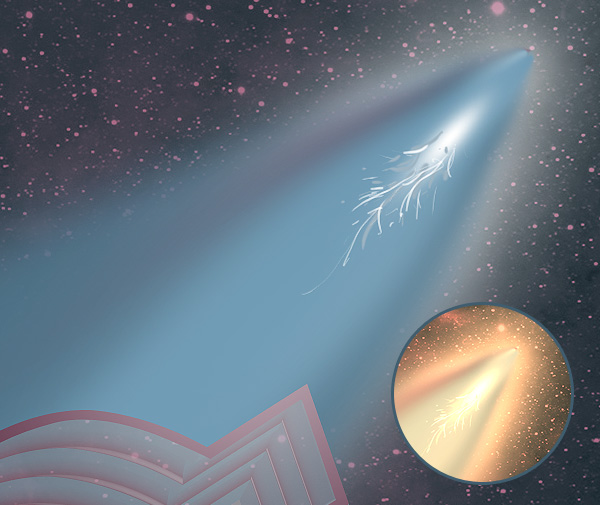 Now get this photo of a retro rocket. Go to Layer > New Adjustment Layer > Selective Color, and change the red values so that the rocket's colors match the design's tint. Make it a Clipping Mask, so the adjustments only affect the rocket.

NOTE: The photo contains a clipping mask. Just open the downloaded photo and check your Path Menu. Select it and transform it into a selection using the dotted line icon. Thankfully, that makes cutting it out a whole lot easier. These paths created by the author are usually found in isolated objects placed on white backgrounds, such as this one. 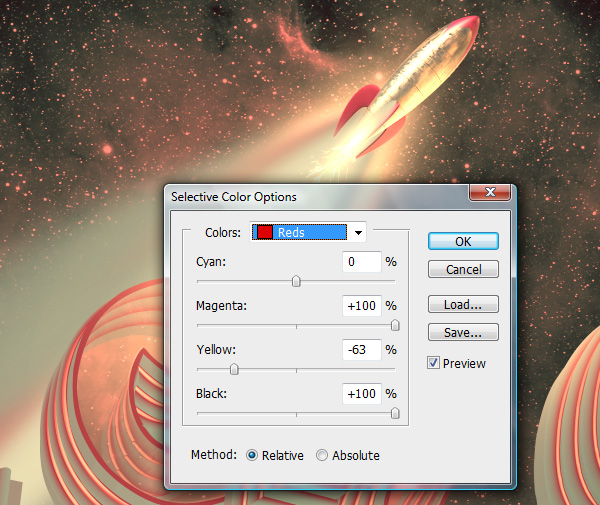 And that's it for the rocket. It should look something like the one below. I placed it half way in between the order of the layers, so that some of the streams cover the edge.

Now add a similar version on the top, which will give the impression of a second travelling rocket.

The final element to add is this Sputnik 1 satellite 3D replica.

For the sake of giving it a similar color scheme, I created a few vector shapes with the Pen Tool (P) and set them on Color Dodge and about 60% Opacity. 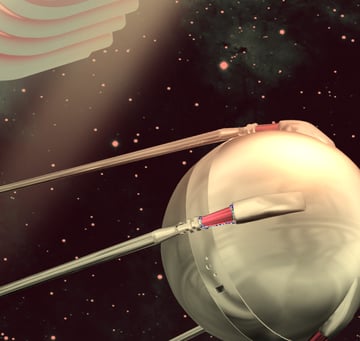 Duplicate the background layer and the Gradient Map you applied to it. Put them on top of all the layers, except the channel mixer. Set the image's Blending Mode to Screen and 70% Opacity. Change the Gradient Map so that it only has a dark blue, and no more violet.

Download this paper texture from BittBox, and greatly increase its contrast with a Curves effect (Command + M). Set its Opacity to 80% and Desaturate it (Command + Shift + U). The photo is smaller than the project size, but mirroring it and fading it into the other one will correct that. 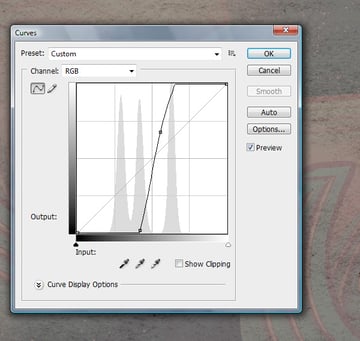 Set the layer on Soft Light. 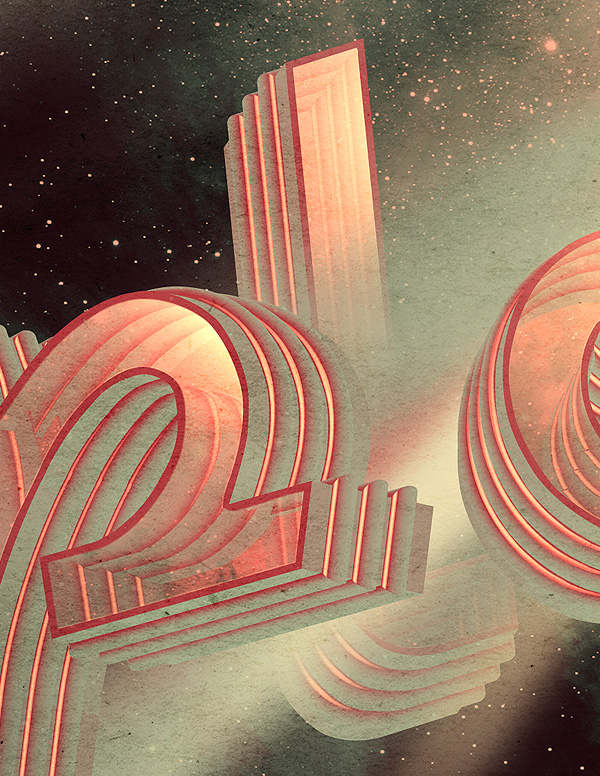 Well, that's it! Compositionally, it's not a complicated piece, but it's the attention to detail that completes it. I hope you've enjoyed it as much as I have! 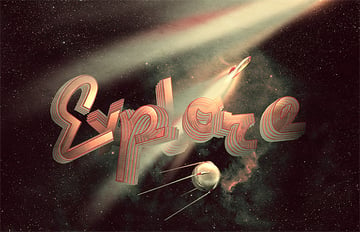