Halloween is near! So let's take a pumpkin image, carve it up, and light it for this coming holiday. You'll learn how to get this nice effect on any pumpkin picture, how to play with the colors, apply some layer blending modes to skip the extraction process, and more.

Before we get started, let's take a look at the image we'll be creating. You can view the final image preview below or view a larger version here.

Let's begin. First create a new document, use the size of your screen resolution if you want to. In my case 1440 pixels by 900 pixels. Then fill the background with a radial brown to black gradient. Notice that I always use two guides to obtain the center of the document.

Now look for your pumpkin image, or download this picture and paste it into the middle of the document. It doesn't matter if your pumpkin is too large or wide or even if the colors aren't right. That's why we'll be using Photoshop, to make it look like a contest winner pumpkin.

Extract the pumpkin from the background, you can use the Lasso Tool or by creating a path around the contour and creating a vector mask, either way it's fine. Free Transform the pumpkin to reduce it width. Also, take care with the details, like the little branch on the top, I'm making it softer. Finally, you'll get something like the bottom of the image below.

Hit Command + L to adjust the levels of the "Pumpkin" layer, increase the dark areas levels, you can set the values below. Also, it's a good moment to resize the pumpkin if you want it a little bit smaller.

Create a new layer above the pumpkin, name it "Sketch." Now using the Brush Tool, draw a quick sketch of the pumpkin face: the eyes, nose, and mouth, I'm using a tablet so this step is really easy. Anyway, you can use the Pen Tool, draw the face, apply a Stroke effect to the paths, and change Fill value to 0%, then rasterize the result by merging the paths layer with an empty layer above or below it.

Now let's add some light sources, in this case some candles, I'm using this one. Paste it into a new layer and just make a quick selection around the candle, hit Command + Option + D to Feather the selection, Command + Shit + I to invert it, and then delete the selection. You'll get something like the image below.

Now, a good way to add this candle to our design without spending hours extracting the fire is by changing the "Candle" layer Blending Mode to Screen. Just put the candle layer below the "Pumpkin" layer and above the "Fill" layer. Duplicate the candle a few times if you want to.

Show the "Sketch" layer, and draw some lines to improve the hole's effect by adding depth. Select the new areas using the Magic Wand Tool. Create a new layer below the "Pumpkin" layer, I call it "Fill 2," and fill the selection with black. Finally, hide the sketch once again.

Now add a Radial Gradient Overlay and a Pattern Overlay effect to the "Fill 2" layer just to give it more depth and texture.

Now it's time to add some light and dark details to our pumpkin. Create a new layer called "Light details." Start with a small soft brush maybe around 5px, paint a few lines close to the carved edge borders and use the Smudge Tool to make the lines softer. 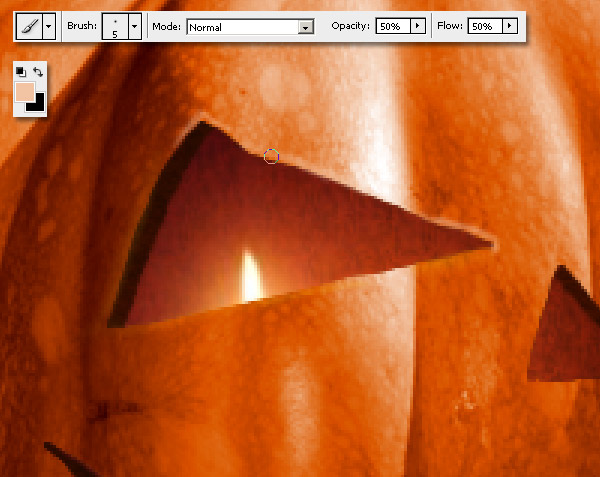 Now to add volume to the holes' borders. Let's add some soft dark lines here and there. Create a new layer called "Dark details" and use the same 5px brush, but this time change the color to a dark brown. Then Smudge the lines a little bit.

Now select the "Fill 2" layer, and in the Layers Palette double-click on the Gradient Overlay effect and change the gradient to make it more light with these colors: (#741A02 - #AC3304). Hit OK and see the result. 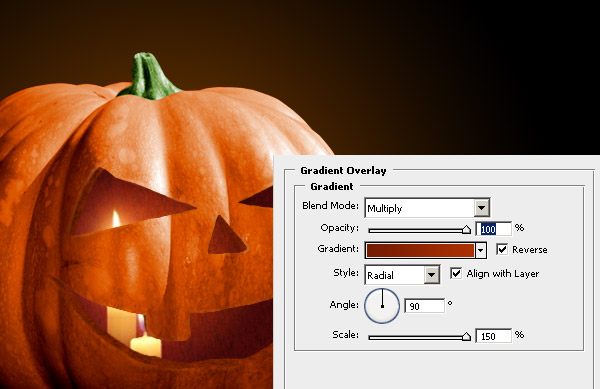 Again, using the dark Brush, paint some dark areas inside the carves. This way you'll have inner shadows for each hole. 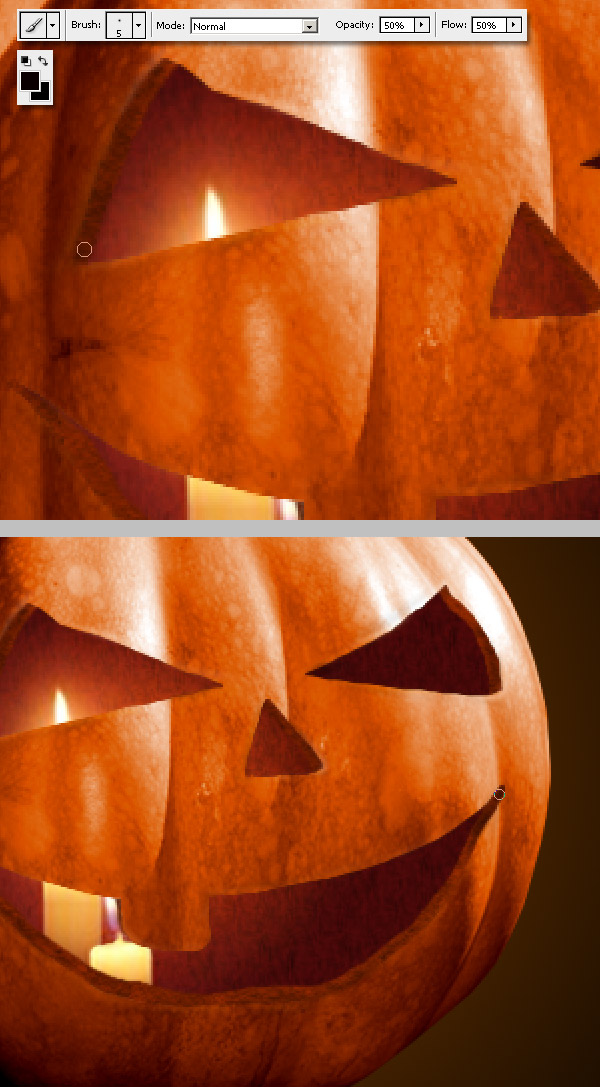 Duplicate the "Fill" layer and name it "Light." Delete the layer styles and fill it with orange. Place it above all other layers and convert it into a Smart Object. Next go to Filters > Blur > Radial Blur, then set the Amount 100, Zoom, and Best Quality. Apply the filter one more time and change the layer's Blending Mode to Linear Dodge (Add).

Now duplicate the "Light" layer and render the filters, you can do that by adding a blank layer above "Light copy" and merge both. Then apply a Gaussian Blur with a Radius 25 - 26 px to "Light copy" layer. Also, change it's Blending Mode to Linear Dodge (Add). Duplicate "Light copy" layer one more time, then using the Lasso Tool, delete the pumpkin's tooth area without light on the "Light copy 2" layer.

Now, we'll add a nice background. Create a new layer just above the "Background" layer, and name it "Clouds." Press the D Key on your keyboard to set the default black and white colors. Next, go to Filter > Render > Clouds, hit Command + F a few times until you're happy with the result.

Go to Filter > Render > Difference Clouds and apply that filter a few times until you've got something like the middle of the image below. Then go to select "Clouds" layer and change it's Blending mode to Color Dodge, this way we'll be merging the clouds with the background radial gradient.

Finally, merge both the "Background" and the "Clouds" layer, and name this new layer "Bg1," or if you want to keep these layers editable, put both into a new folder, convert it into a Smart object, duplicate the Smart Object, and rasterize it.

Using the Lasso Tool, select a big area of "Bg1" layer and copy it. Paste the copy just above the first one and resize it a little bit, then name it "Bg2." Next, hit Command + U to adjust the Hue/Saturation, change the Hue values to make it more red. Next, change the "Bg2" Blending Mode to Screen.

Add a few more clouds repeating the previous step, use different colors. When you have finished, create a new folder and put all the clouds in it, then convert the folder into a Smart Object. 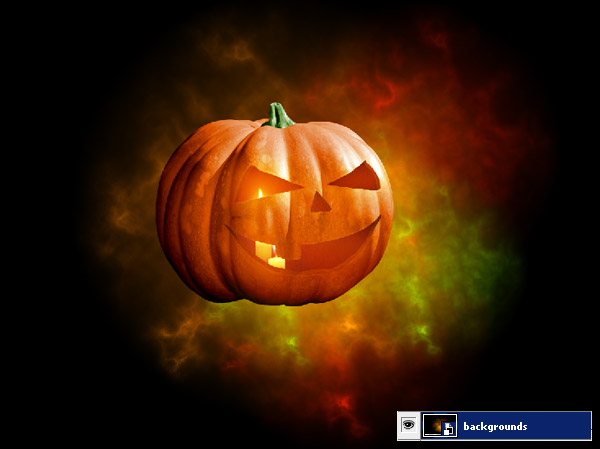 Notice that our pumpkin has a black shadow on the left side. We'll try to keep that lightening in the final outcome. Select the "background" layer's Smart Object, and go to Layer > Layer Mask > Reveal all.

Now, using the Eliptical Marquee Tool, draw an ellipse as shown. Next, while holding the Shift key, draw another eliptical selection on the pumpkin's base. Then hit Command + Option + D to Feather the selection about 50px. And fill the selection with black directly into the layer mask.

Now add a surface. Draw a black rectangle using the Rectangle Tool just above the "backgrounds" layer, then change the rectangle's Opacity to 75%. 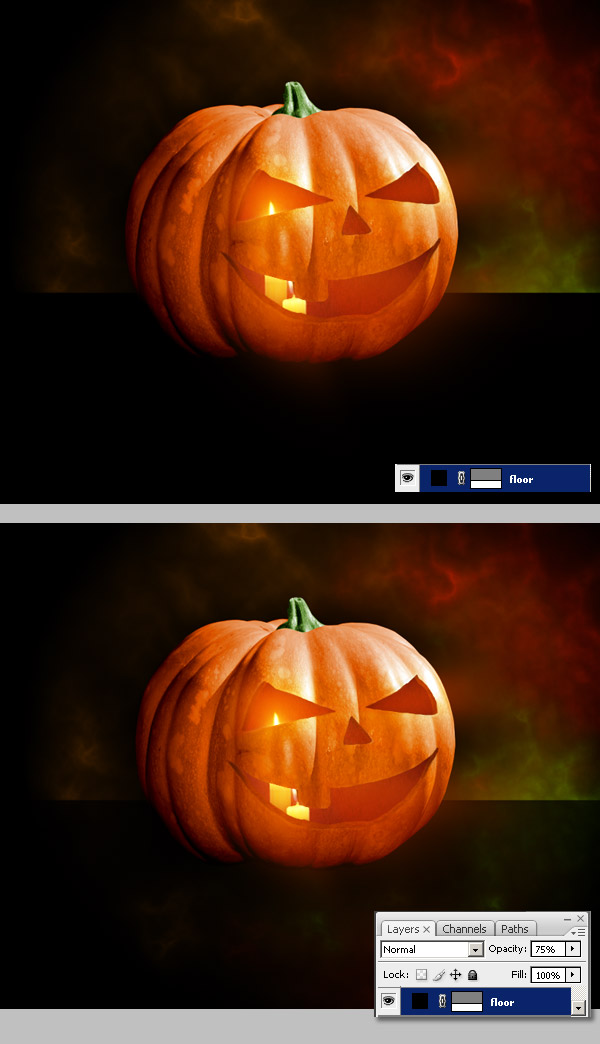 Now we need a ground shadow, Create a new layer called "Ground shadow" above every layer on your design. Make an eliptical selection, then Feather it 50px, and fill it with black. Next, using the Lasso Tool, draw an irregular shape following pumpkin's shape. Feather the selection about 20 pixels and Delete it. Then change the layer's Opacity to 75%.

Next, create a new layer below the "Ground shadow" layer and name it "Inner Shadow." Now using a big dark brush, paint some areas inside the eyes, nose, and mouth. Command-click the "Fill" layer, Command + I to inverse the selection, and Delete all the extra painting of the "Inner Shadow" layer. Then Command-click the "Fill 2" layer, Feather the selection 2 pixels and Delete it.

We're close to finished. Now we'll add more details. Duplicate one of the candles, name it "Candle Front," and bring the layer above all the others. As you can see, the original candle picture has a black fade out that we don't need right now, we need to fix that. Make a linear selection on the "Candle Front" layer, then using the Free Transform options (V), make the selection higher. Fix the brighter areas next to the candle using the Clone Tool and Erase all the dirty areas.

Next select the Clone Tool, set the cloning source somewhere inside the candle, set a small brush and draw some wax drops all around the candle. Use the Smudge Tool to improve the wax drops. Also, use the Clone Tool to add some lightening details.

Duplicate the "Candle front" layer. Go to Edit > Transform > Flip Vertical, and add to it a Layer Mask filled with a black to white Gradient Overlay. Also, fill a small eliptical selection with black above the "Candle Front" layer to add a little shadow to the candle.

Put the three layers ("Candle Front," "Candle Front copy," and "Candle Shadow") into a folder and convert it into a Smart Object. Duplicate the Smart Object and place it above the "Floor" layer. Apply a Blur filter to it.

Finally, put all the pumpkin's layers into a folder, duplicate the folder and merge it. Then apply the same reflection process as the previous step. 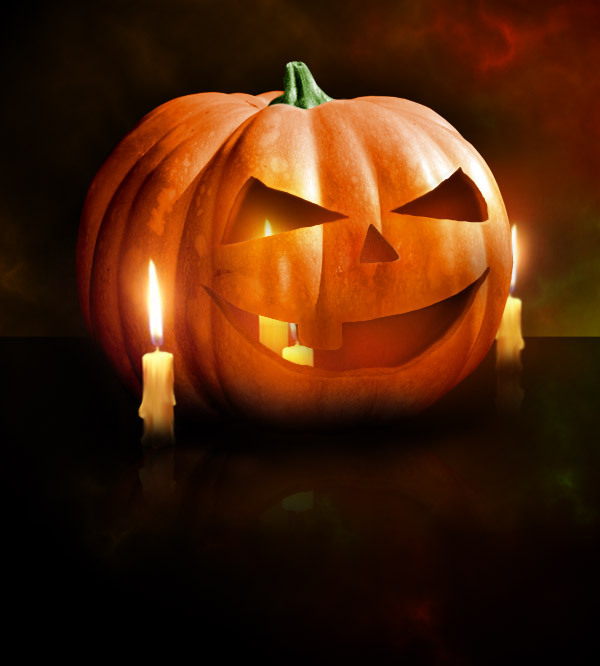 Our image is ready! Now we have a nice Halloween's wallpaper to use and share. Obviously, you can create your very own design and carve your pumpkin as you want. Give it a try! You can view the final image preview below or view a larger version here. 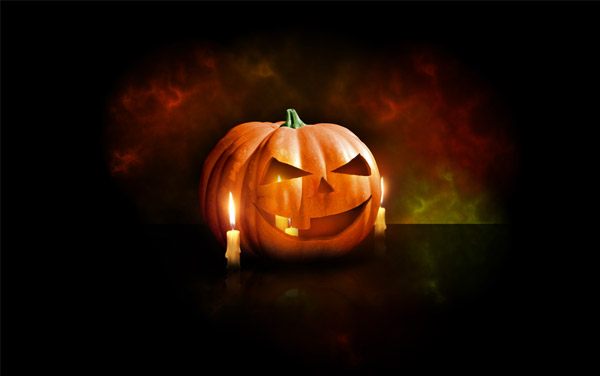