In this tutorial you will learn how to make a psychedelic character and background with Adobe Illustrator. Using various line weights, Halftone coloring techniques and the Eraser tool, you will build an exciting Comic style Illustration.

I like to start all my illustrations using pencil and paper, that way I can sit comfortably and get my ideas down quickly. The inspiration for this piece comes from an old cartoon I used to watch when I was young called Jayce and the Wheeled Warriors. I remember that it had something to do with strange plant animal robot cars and it had a knight and a wizard in it. I've combined these ideas to make a Robot Knight Magician with wheels for legs. If that sounds a little crazy, at least we're going to be drawing something original!

Get a blank piece of paper and sketch out your character. Use this sketch to establish some basic shading. Once your sketch is finished scan it into your computer, save it as a .jpeg and open it in Illustrator. Drop the opacity of this layer to 65% and we can begin.

Create a new layer above your sketch. Use the pen tool set to a black colored stroke to trace the line art. Use a mixture of stroke widths here, 4pt for the outline and 3 or 2 pt for the inner lines. Leave some of the lines blank for the moment; these are the ones which taper to a point. It's good to add some definition to some of your strokes so that the finished character doesn't look too sterile and rigid.

Note: You're not creating line art for the stars and lightning bolts as these will be added later. In addition to the outer stroke, use the pen tool to block in the eye slit and the underneath of your character.

Using the shape tool, add a curved end to some of the strokes. It helps to keep zooming in and out to make sure that the curves don't look out of place in relation to the stroke ends.

For the inside of the cuffs use a custom art brush similar to the one shown in the screenshot below. Remember to make the thickness of the custom brush similar to the average stroke weight used in the line art. I recommend using an art brush here rather than the shape tool as you will use it later to create the background clouds. Lock this layer as you're now going to add the base colors.

Using a loosely CMYK based palette and the pen tool, block in some base colors on a new layer beneath the line art. I'd recommend keeping the amount of colors that you use to a minimum. This allows you to practice working with a limited palette (something which is essential if you ever decide to try designing T-shirts or any other process that requires a limited amount of colors such as DIY screen printing).

One thing to note is that the darker colors on the eye slit will need to be on their own layer directly beneath the line art. This is because when you create the halftones in the next step you don't want it applied to this area. It is easier to do it this way rather than creating a complicated clipping mask.

For this step you will need a Halftone vector (if you don't have one you can either create your own or use a search engine to find one). A Halftone is essentially a grid of shapes. The one I've used starts with larger circles graduating to smaller ones.

With the mask and halftone both selected open the Transparency palette, click the menu arrow and select Make Opacity Mask. Repeat these steps on the main body of the character using the yellow color and on the arms using the darker blue variation that you used for shading. Note: On the body halftone masks I've followed the curve of the speaker and arm socket.

Draw a lightning bolt using a yellow fill and a 2pt black stroke. With the bolt selected go to Effects > 3D > Extrude and Bevel. Click Preview and rotate the cube in the options box so that the perspective roughly matches mine (see screenshot below). Make sure to set the Surface option to No Shading. This will remove any gradient shading. Finally set the Extrude Depth to 10pt and click OK. Repeat this process to create the smaller lightning bolt and 2 star shapes.

You have now finished your main character. If you've been following closely you should have something similar to the picture below. Create a new layer, drag all the character layers into it and lock it. You will be creating a duplicate of this character later but for now let's concentrate on the background.

Turn the character layers visibility off and create a new layer underneath it. Using the same custom Art Brush you created earlier draw every other stroke to form the outline of a cloud (see screenshot below). Using a thick black stroke fill in the gaps that make up the alternating strokes.

With the cloud still selected switch to the Live Paint Bucket and convert it into a Live Paint object. Create a number of variations of your cloud in varying sizes, rotations and colors (using the same colors that you previously used for your character).

If you turned your character layer off to create your clouds you can now turn it back on. Create enough copies of you clouds to fill some of the background behind your character reaching up to the top left of the canvas like in the screenshot below.

Create a duplicate of your character layer by dragging the layer onto the Create New Layer icon in the Layers palette. Make sure that this duplicate layer is beneath the original character and above the clouds. Select all the objects on this layer and flip it horizontally by going to Object > Transform > Reflect. Choose the Vertical option and click OK.

Drag your character up to the top left of the canvas and rotate it slightly to give the impression that they are riding down the clouds towards you. Remove the lightning bolts and change the color of the stars to add some variation.

To give the impression that this character is actually riding through the clouds, make a copy of a few clouds and place them on a layer above it. If you look at the screenshot below you can see that the edges of the cloud need to be placed around the wheel to achieve this effect.

Magicians are always pulling doves and rabbits out of their hats, so what better accessory for your Robot Knight Magician than a brightly colored bird. Using the same technique as before, draw the outline of the bird using a thick black stroke.

If you don't feel comfortable drawing a bird freehand feel free to trace a photo, just remember that you're not aiming for a photo-realistic finish.

Using a slightly thinner stroke, add some details to the bird. Remember a bird needs a beak, wings, eyes, tail and breast. You could accessorize it with more details like a top hat, gold chain or other status symbols, but as this is only a supporting character you want to keep it simple.

Keeping the same CMYK inspired color palette, block in the bird's colors using the pen tool on a layer beneath the strokes.

Add a few spots of color to the bird to give it more detail. In addition to this add a few feathers to the top of his head. I've done this by using the fill color of the birds body with a black stroke. This shape is essentially an open path (see screenshot below). Finally add some claws on a layer above and beneath the magician character.

Note: If you are submitting your design to a T-shirt site you might be asked to submit shapes that are closed. In this scenario you would need to expand your feather shape to convert it into closed paths.

To give the bird depth you're going to place its tail between the characters fingers. You could use a mask to do this but I find it a lot easier and a lot quicker to use the Eraser tool. Drop the opacity of the bird to about 75% and select the Eraser tool.

The area you want to erase is the part of the tail that appears above tip of the middle finger. If you look at the screenshot below you can see that I've highlighted the area in yellow. You'll notice that I've not quite erased up to and including the entire finger stroke. This is because if I were to do this the stroke of the bird would make the edge of the finger look extra thick.

Using the Eraser tool begin by deleting the overlapping area until you are happy. It's a good idea to zoom out while doing this to ensure that the finger tip doesn't look too thick. Practice this and you will soon see that you have another quick option available for removing unwanted areas of shapes.

To finish the piece off you're going to add a few extra background elements. Draw a large circle under all the existing layers, make sure that you give it a nice thick stroke and a color that works well with the existing palette.

Using the Eraser tool as a hole punch, choose a large circular shape and click on the areas of the circle where the clouds don't quite meet the edge. The Eraser tool is really good at creating interesting geometric shapes like this. I've used it a couple of times to create a bite mark when drawing zombie inspired pieces.

Add another block shape using the same stroke and fill settings as in the previous steps. To give it some variation, add a yellow Halftone to tie it in with the characters. Remember to leave a large space at the top of the shape for some text.

To finish the piece and complete my homage to the country which created all the cartoons of my youth I've opted to add a single word to the background. Use a well known search engine to translate the word Magic into Japanese and paste the resulting translation onto your background.

I hope you've enjoyed this tutorial and that you've learnt a few new tricks along the way. 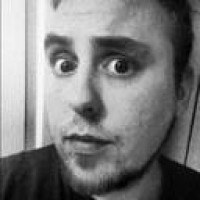 Neil Hanvey
Hi my name is Neil Hanvey although you may know me as neilakoga. I'm a programmer / illustrator, born and raised in Manchester, UK. I currently live and work in Herefordshire spending my days developing websites at Pepperneck and my nights doodling. I'm also a member of the SlashThree collective.
Weekly email summary