For this forth installment of the "Creating a Set of Digital Painting Icons" series we will create a pen tablet from scratch, specifically the Wacom 12" Cintiq tablet. This model combines touch and pressure sensitivity, which allows users to draw directly on the screen. These capabilities make it a favorite for illustrators. Let's get to work.

Take a look at the finished icon for this tutorial. We'll draw the tablet and the stylus complete with shiny screen, side buttons and blue LED status lights. 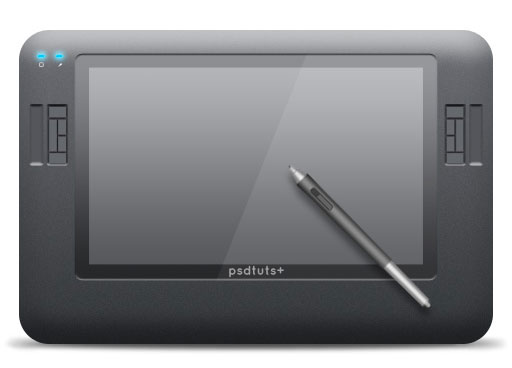 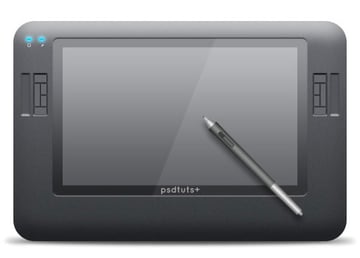 Fire up Photoshop and create a new RGB blank document, choosing a 512px x 512px square canvas. Choose a dark gray foreground color then select the Rounded Rectangle Tool (U) from the toolbar. In the option bar at the top of the screen enter 30px for the corner radius (1a) then Alt-click and drag from the center of the canvas to create the main body of the tablet (1b). Alt-clicking centers shapes, selections and transformations around the mouse. It's a pretty useful keyboard shortcut so note it down. When you're satisfied with the shape right-click on the layer and choose Rasterize Layer. Name it "base." 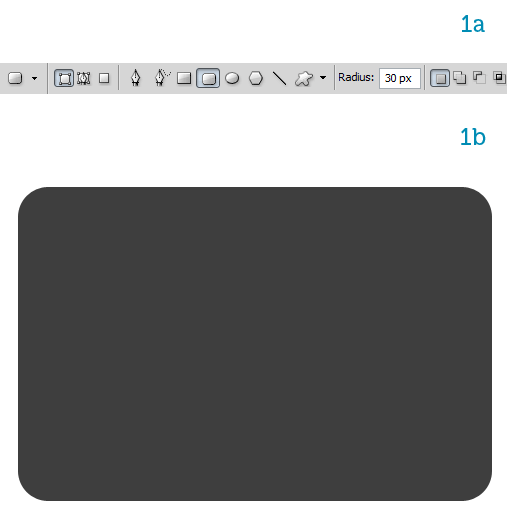 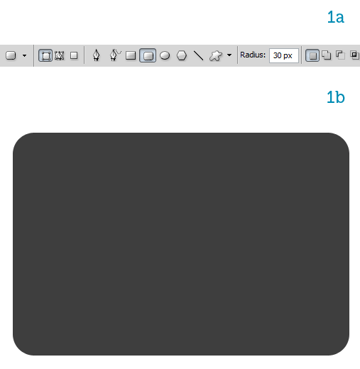 The tablet's main body looks flat. Let's add some lighting by choosing a light gray as foreground color and keeping the previous dark gray as background color (2a). Hit G to select the Gradient Tool. Before we paint the gradient, though, let's lock the "base" layer's transparency by clicking the transparent square at the top of the Layers palette (2b). Now we can safely paint all over the tablet because we will be limited to the existing pixels. Paint the gradient with a vertical stroke, light to dark (2c). 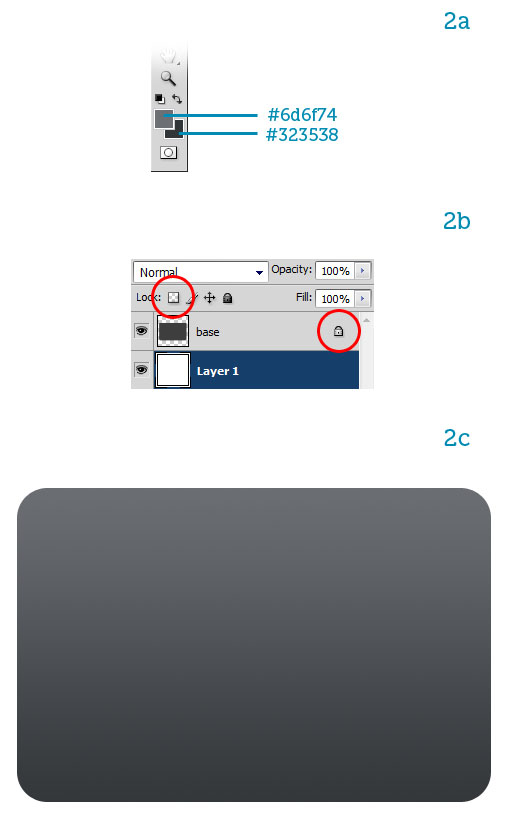 The surface of the tablet is not so smooth. There's a very fine grain. To create that go to Filter > Noise > Add Noise and choose 1%, Uniform and Monochromatic (3a). See the result (3b). We also need to give the tablet some thickness so double-click on the "base" layer to open the Layer Style window and click on Bevel and Emboss. Refer to image 3c for the settings. Now the tablet has thickness and a gentle curve around the edges (3d).

Let's draw the glass surface. Select the Rounded Rectangle Tool (U) again but this time set Radius to 10px (4a). Draw a smaller rectangle at the top center and name it "glass" (4b). Rasterize it, lock its transparency and fill it with a vertical gradient from a medium to a very dark gray (4c). 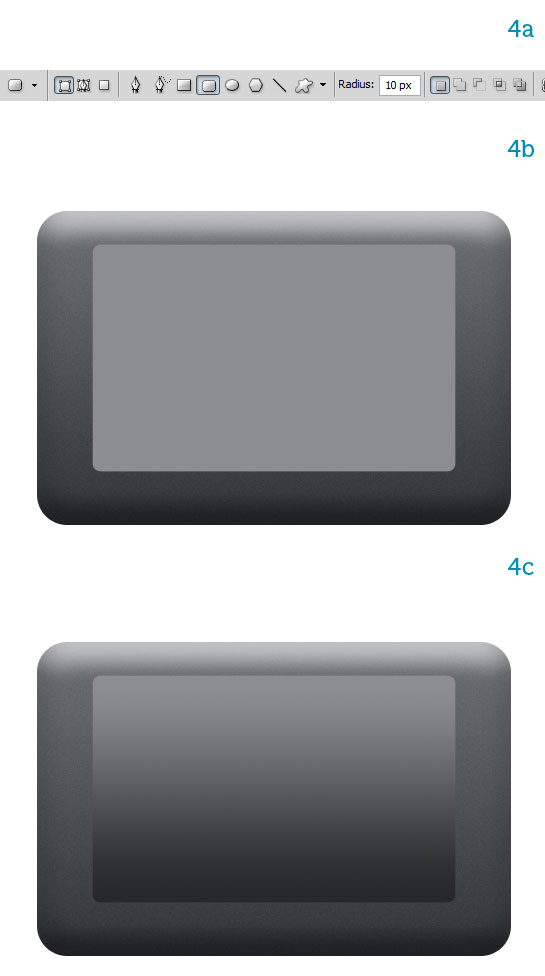 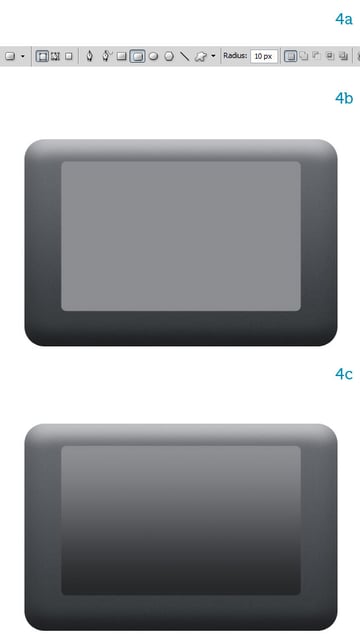 The actual active area is a bit smaller than the glass and has sharp edges. Draw it with the Rectangle Tool and give it a Gradient Overlay style, light to medium gray (5a). Now is also the time to add a logo at the bottom of the glass. Use the Text Tool (T) and a very light gray (but not white) to add your custom logo (5b).

The glass is inset from the tablet's base plastic surface. Duplicate the "glass" layer and name the copy "glass rim." Set the Fill to 0% (6a). The layer's actual pixels are invisible but any Layer Style we add will not. That's a neat trick when you just want to use a layer's contour without showing its content. What we want is Bevel and Emboss again. Make sure you choose the "Down" option, which will create an inset bevel (6b). Now the glass has a hard, shallow edge inset from the base (6c).

To finish the screen we'll add a big reflective highlight. Cmd-click the "glass" (7a) then fill a new layer with white (7b). Name it "reflection" (7c). Using the Polygonal Lasso Tool (L) make a slanted selection over the right side of the layer (7d). Add the selection as a mask (7e) then set the layer's blending mode to Screen, 20% opacity (7f). The screen is finished (7g) so we can group all related layers now (7h).

For the LED light, pick the Ellipse Tool (U) and draw a 7x3 pixel, light blue ellipse at the top left corner of the tablet (8a). Name it "LED 1" then add an Outer Glow (8b) and Inner Glow (8c) layer style. We now have a nice glowing status light (8d).

Duplicate the LED light and add some symbols below them. Make up your own or refer to pictures of the actual Cintiq.

On to the side buttons. First let's make the touch strip. Choose the same gray as the "base" layer. Using the Rounded Rectangle Tool (U) with a 2px radius draw a thin vertical strip on the left side of the glass (10a). The strip is inset from the main body so let's add a Bevel and Emboss style (10b). Activate the Contour option too (10c). See the result (10d).

Next to the touch strip there is another scalloped section that contains the four function keys. Duplicate the strip, move it to the right and widen it so the four keys will fit. Name it "key strip." 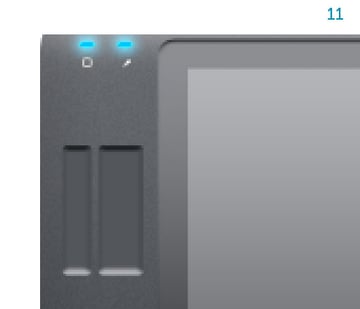 For the function keys choose a lighter gray color. Draw the top key with the Rectangle Tool (12a) and name it "top key." They key casts a shadow all around itself. Create that shadow with an Outer Glow style (12b). The remaining keys can be easily created by duplicating the "top key", adapting their proportions and positioning them on the strip (12c).

Group both strips and the five keys in a group called "BUTTONS L." Duplicate the group, name the new one "BUTTONS R", move it to the right of the glass and flip it horizontally (13a). To finish the tablet let's add a drop shadow. On a new layer beneath the "base" draw a thin long black ellipse. Set it to Multiply, 70% opacity. Go to Filter > Blur > Gaussian Blur and choose 3px. The result is a soft, natural-looking shadow (13b).

Time to create the stylus now. Draw the right half of the stylus using the Pen Tool in Shape Layer mode (14a). Create the other half (14b) then merge the two shapes together. Use a medium gray as base color (14c). Name the layer "pen body."

Let's add the main highlight. Duplicate the pen layer and scale it down horizontally. Brighten it using either Hue/Saturation (Cmd + U) or Brightness/Contrast (15a). Finally add a 1px Gaussian Blur to blend it with the bottom layer (15b). You might need to set the highlight's blending mode to Screen depending on the colors you picked and the outcome you desire. Name the layer "pen body reflection."

Using the Rectangular Marquee Tool (M) select a thin horizontal strip on the "pen body reflection" layer halfway up the tapered end. Darken the selection (16a). Now select the tip on both layers and erase, leaving a flat end (16b). 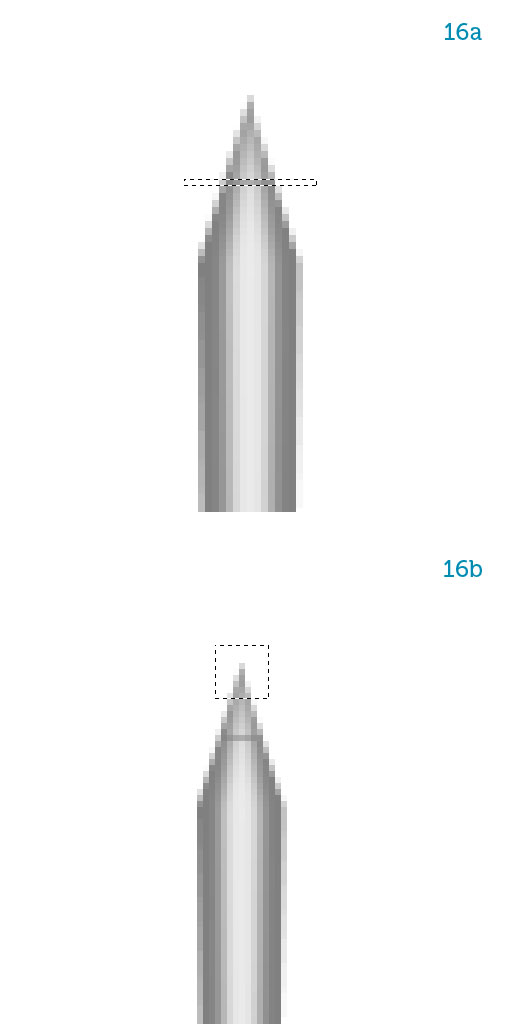 Draw the rubber grip with a rounded rectangle slightly tapered so it flares at the top (18a). The radius should be really small, about 3px. Add a Gradient Overlay style (18b). The rubber grip now appears round (18c).

Let's draw the side button on the stylus. Draw a dark gray rectangle on a new layer, right where you thumb would be if you gripped the stylus (19a). Marquee-select the bottom two-thirds (19b) then hit Cmd + J to copy the selection to a new layer. This side of the button faces upwards, therefore we have to brighten it (19c). Hit Cmd + E to merge this face down. Now we only have to add an Outer Glow to simulate the hole in which the button is set (19d). The side button is complete (19e).

Group all the layers that make up the pen and name the group "PEN" (20a). Keep the layer structure for later modifications. Duplicate the group and hit Cmd + E to merge all layers into one. At this point we can add a Drop Shadow (20b) and position the stylus where we want. We are done (20c).

I hope you learned a few tricks from this tutorial. Maybe it even made you want to buy a tablet! As always with icon design, we relied on vector shapes and layer styles to obtain maximum effect and flexibility. Should you want to change colors, thicknesses or light direction you can always go back to the layer structure and make the necessary adjustments. See you next time for our final design in this series when we'll create a cityscape display icon!

Icon DesignAdobe Photoshop
Did you find this post useful?
Yes No
Would you like to provide feedback (optional)?
Cancel Submit