Welcome to the second tutorial in the "Creating a Set of Digital Painting Icons" series. This time we'll create a digital SLR camera, a tool digital artists often use to take pictures to create textures or for reference. We will construct a rather simple camera, but we'll make it interesting through judicious use of brush strokes and shadows. Let's get to it!

You can view the final image preview below.

In this tutorial we are aiming for a digital SLR camera complete with pun-riddled brand and model name. 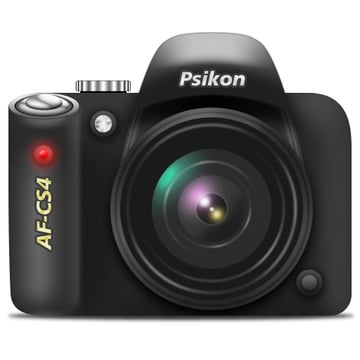 Create a new blank document and as usual set both width and height to 512 pixels.
Select a very dark gray foreground color and create the shape of the camera's body using the Pen Tool (P) in Shape layers mode. Pay attention to the fact that the shape is not symmetrical and the corners have different radiuses. 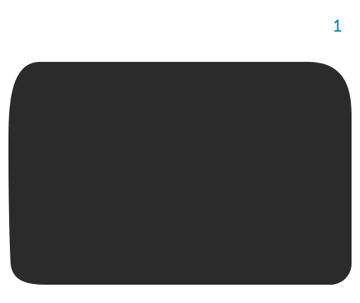 Using brush strokes in selected spots we'll add three-dimensionality to this flat shape. Make the foregound color white. Select the Dodge Tool (O) from the toolbar and set it up as in image 2a. If you have a pressure-sensitive tablet, then paint very lightly to add roundness to the right edge (2b). If you don't have a tablet, you need to reduce the Dodge Tool's exposure to a very low number and use successive strokes to achieve a similar effect. You'll get the hang of it soon enough. On the left there's a bulging grip barrel. Paint vertical strokes with the Dodge Tool near to but not on the edge (2c).

Now let's switch to the Burn Tool (O) to add shadows. Set it up as in image 3a and darken the spots marked in image 3b. Now the convex grip barrel is more visible and the bottom is darker. The brush strokes are visible, too, and it's not a pretty sight. We want the camera to be smooth.

We can use a blur pass on the whole surface. In order to keep the edges sharp we must toggle on Preserve Transparency in the Layers palette (3c). Now we can go to Filter > Blur > Gaussian Blur and choose a moderate value (3d) to smooth the surface (3e).

Let's create the lens now. First set up a few guides to mark its center (4a). Now create a medium, dark gray circle. It will be the outer rim of the lens (4b). Create a smaller, darker circle by duplicating and scaling the first one (4c).

Add a radial Gradient Overlay style to the first circle (5a) with tightly placed color spots (5b) to create a couple of rings (5c). Once satisfied with the result rasterize the layer style. Command-click the New Layer icon at the bottom of the Layers window to create a layer below the one selected (5d). Now Hit Command + E to merge the outer rim down with the empty layer (5e).

Using the Dodge and the Burn tools add some reflections to the outer rim. Refer to image 6 for the detailed instructions. 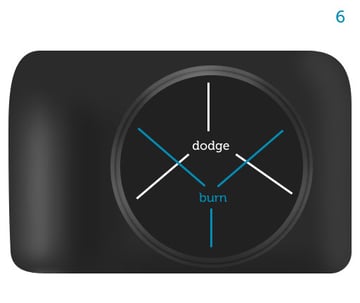 We will now add several smaller rims and circles to the the lens and we will simulate reflections with the Dodge and Burn technique explained before. Add a smaller rim (7a), add reflections (7b) and use the Gaussian Blur filter set to 1px (7c).

Create a smaller rim (8a), erase the top-left part with the Eraser Tool (E) set to a big, soft brush. Enhance the lighting with a dab of the Dodge Tool (8b). 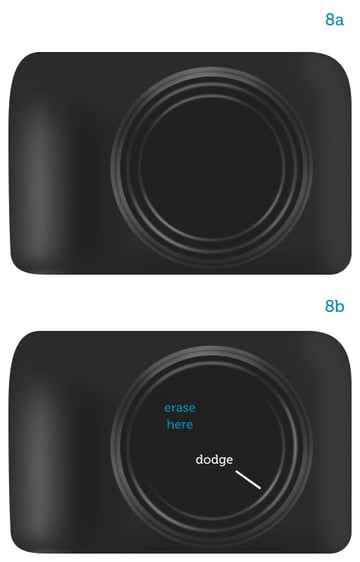 Add a dark gray circle (10a) and the shutter hole. The shutter hole is a black circle with a medium gray thin stroke (10b). Finally use Dodge and Burn on the circle created in image 10a to make it look convex (10c).

Let's add some cool highlights on the lens. Using the brush tool set to a soft, round preset and low opacity paint a few colored highlights near the shutter hole: a purple one (11a), a green one (11b) a white one and a yellow one (11c).

The lens has a glass cover. Create a white circle above all highlights (12a) and set it to Screen blending mode, 15% opacity (12b). Now a little adjustment: increase the contrast on the body by using Levels, Brightness/Contrast or Curves (12c). I used Levels (Command+L) and moved the left slider (black point) to the right and the right slider (white point) to the left (12d).

The lens is finished so we can group all its layers together. Make a duplicate of the group and hit Command+E to merge it down to one layer (13a). Hide the original group and keep it for later tweaking. Add a Drop Shadow style to the lens layer (13b) so it casts a shadow onto the body (13c). The shadow must not be visible outside the contour of the body so Alt-click between the lens layer and the body layer to mask the first with the latter (13d). Now the shadow doesn't stick out from the bottom of the camera anymore (13e).

We'll create the shutter button now.
Draw an ellipse above the convex grip barrel on the left side (14a). Fill in the gap between the body and the ellipse (14b) 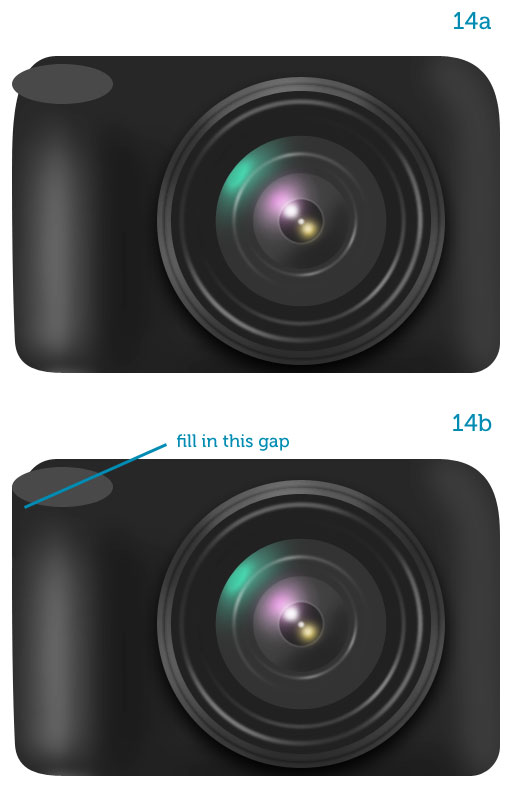 Duplicate the ellipse and align the copy to the top of the camera's body (15a). Fill the bottom ellipse with a horizontal gradient. Use the values indicated in image 15b. Now grab the Blur Tool from the toolbar and blur the bottom of the ellipse to remove its hard edge and blend it with the main body (15c).

Add a Stroke style to the top ellipse (16a, 16b). Right-click on the "fx" icon on the layer and choose Create Layers (16c). The Stroke style has been converted to a separate layer masked to its "parent." We can now erase most of it and just leave the bottom part to create a front highlight (16d). Merge the stroke down (Command+E) when you're finished. The highlight is too sharp so blur it a bit (16e).

Draw a very dark ellipse on top of the ones you have: it will be the hole where the shutter button sits (17a). A smaller, lighter ellipse will be the base of the shutter (17b). Select the Direct Selection Tool (A) and move the top point up a bit (17c). Duplicate it and scale down the copy to create another shape (17d).

Create the shutter button itself by scaling down yet another copy and making it white (18a). We want our button to be made of polished metal so let's add a couple of layer styles. First let's simulate a shadow cast onto the button from the bottom with an Inner Shadow style (18b). Then add a Satin style (18c) to give it a metallic look (18d).

Copy the shutter's styles to the base and modify the Satin as in image 19a. The reflection has a different angle now (19b). Blur the flat ellipse at the base of the button by 1px to eliminate the sharp edge and simulate a soft shadow (19c). The left side of the camera is complete (19d).

Let's create the flash sensor now.
Create a small circle next to the grip barrel (20a) and add a Drop Shadow (20b) and a black-to-white Gradient Overlay style (20c). Now it looks like it's protruding from the main body (20d).

Let's create the function dial on top of the camera. Select the Rounded Rectangle Tool (U) and set the Radius to 3 pixels (22a). Draw a small rectangle above the flash sensor, at a slight distance from the camera's body (22b). To create the ribbed surface add a Gradient Overlay (22c) with alternating light and dark color spots (22d).

Add an Inner Glow style (23a) to fillet the edges (23b). Finally connect the dial to the body by creating a smaller black rectangle behind it (23c).

The pentaprism is where the magic happens. Let's add it. Using the guides as reference draw the right half of the pentaprism with the Pen Tool (P) (24a). Mirror the shape to the left, join both halves and brighten them a bit (24b). 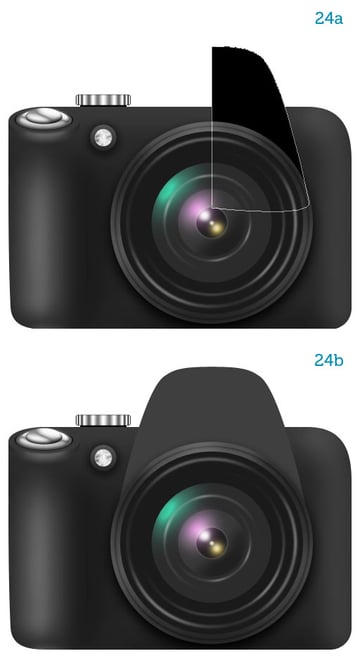 Let's use layer styles again to create some geometry instead of using multiple shapes. Add an Inner Glow style. Pay attention to all the settings shown in image 25a: there's a 6% noise that will add grain to the surface and the 2-ridge contour has been activated. Also add a Gradient Overlay (25b, 25c) to darken the middle part. The result (25d) shows a thin internal border and a fine grain on the surface.

With the Elliptical Marquee Tool (M) make a wide selection around the lens (26a). Hit Shift+Command+I to invert the selection (26b). With the pentaprism layer selected hit Command+J to create a new layer from the selection. Clear all layer styles from this new layer (26c).

Add a drop shadow to the new layer (27a). Create a layer from the style and scale the shadow down vertically (27b). Mask it with the main body so it doesn't bleed outside the camera (27c).

Go back to the top of the pentaprism and add a Bevel and Emboss style (28a). In the result (28b) you can see that the top is now convex.

The camera is finished so we can add a few tweaks.
A fictional brand and model name have been added as well as a couple of extra buttons. These were created by cloning the flash sensor and changing the colors in the layer styles. Pay attention to the grip barrel on the left: the top ellipse has been lightened to medium gray and the right edge of the barrel has been enhanced by another stroke made with the Dodge Tool (29a). The icon is finished (29b).

This was the second installment in the "Creating a Set of Digital Painting Icons" series. We created a simple but effective SLR camera with an array of subtle gradients and the occasional brush stroke. Next time we'll create a paint brush, the most important weapon in the digital artist's arsenal.