This is the first tutorial in a series called "Creating a Set of Digital Painting Icons." We will design five icons that depict common tools associated with digital painting: a sketchbook with pencil, a camera for taking reference pictures, a paintbrush, a pen tablet and a large screen with a complete matte painting displayed on it. Let's get started with the sketchbook icon!

You can view the final image preview below.

Here is the icon we will create in this tutorial. Every artwork starts with the most basic combo, pencil and paper, so let's do that first. 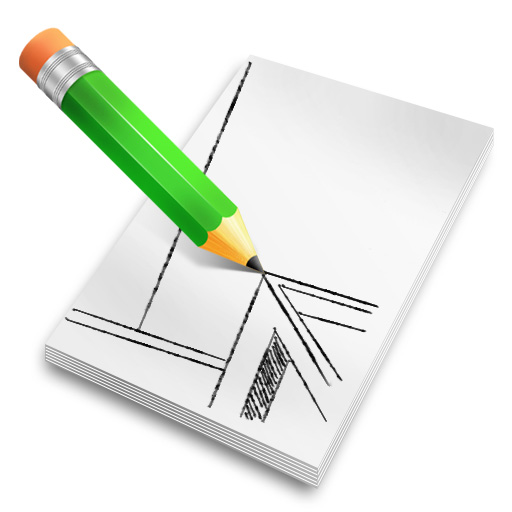 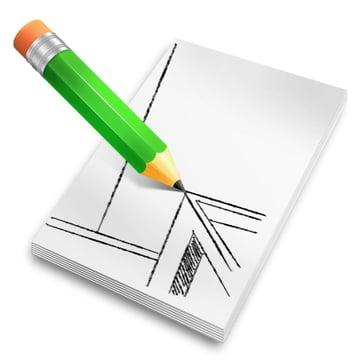 We'll create the pencil first because it's the trickiest item in our icon. Draw a small green circle at the center-top of the canvas using the Elliptical Marquee Tool (M). Then make two smaller copies, one on each side. 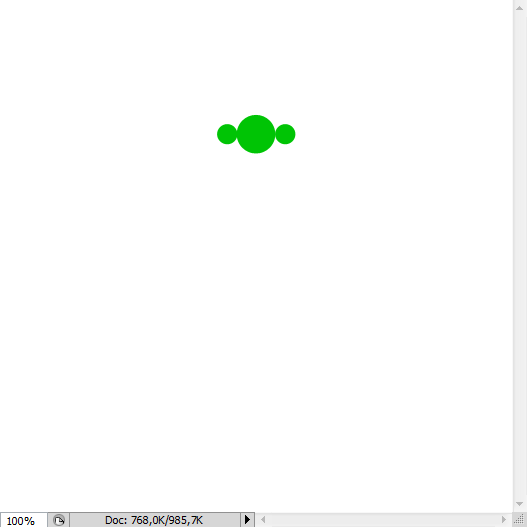 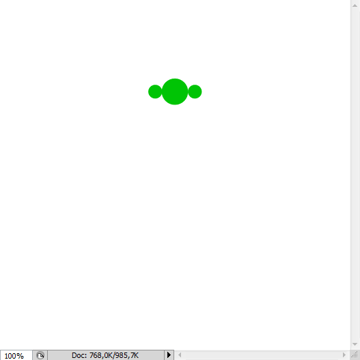 Activate Snap from the View Menu (Shift + Command + ;) and create guides for the pencil. Snap to the three circles to mark where the pencil's vertical edges will be. Draw a light yellow triangle on a separate layer below the circles using either the Pen Tool (P) or the Polygonal Lasso Tool (L), snapping to the guides to ensure symmetry. Name this triangle "tip." 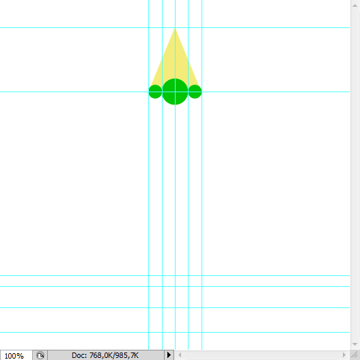 Draw a black circle on top of the "tip" on a separate layer and name it "lead" (3a). Command-click the "tip" layer and use this selection to mask the "lead." Right-click on the mask in the Layers palette and choose Apply Layer Mask to crop the "lead" to the "tip" (3b).

Add two gray ellipses at the bottom guides, right where the metal clasp will be, using the Ellipse Tool (U) (4a). Copy the bottom ellipse, name it "eraser" and move it down. Change its color to a pinkish orange then rasterize all three shapes. With a simple rectangular selection fill in the gap between the bottom gray ellipse and the "eraser" (4b). 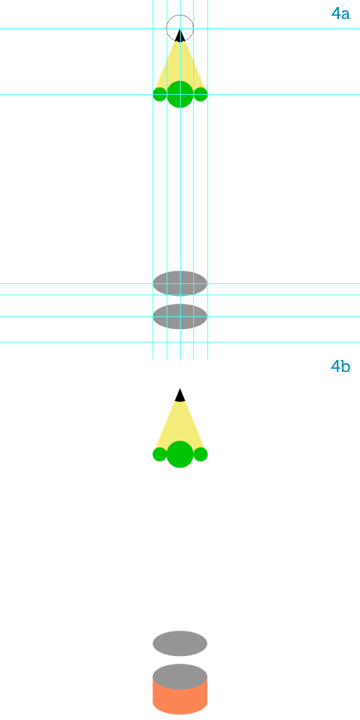 Move the bigger green circle down a bit, then using the Pen Tool (P) draw the shape for the pencil's body, snapping to the guides (5a). Adjust the position of the three circles so they look like a crown on top of the main shape then merge all green shapes together (5b). 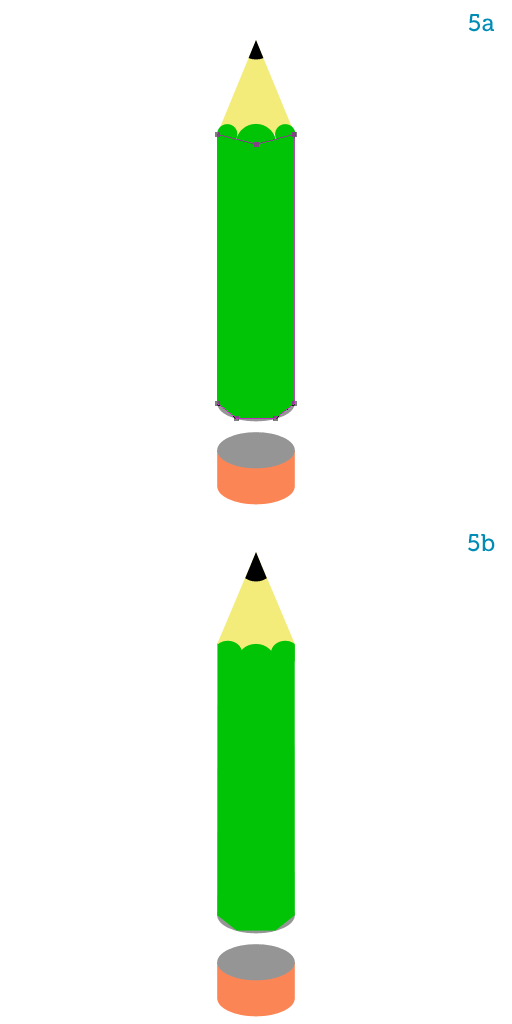 Using the Rectangular Marquee Tool (M) and snapping to the edges of the circles at the top, select each vertical side of the pencil's body then hit Shift + Command + J to create a new layer from the selection, or go to Layer > New > Layer via Cut. You will thus obtain three layers. From left to right name them as follows: "top", "front" and "bottom."

When we rotate the pencil so it points to the sketchbook, the left side will be on top, the middle side will be at the front, and the right side will be at the bottom (6a). Let's imagine that the light comes from the left so when we rotate the pencil to make it write on the sketchbook it will appear to be coming from the top. To comply with the light's direction we have to make the "top" layer lighter and the "bottom" layer darker. You can use the Brightness/Contrast, the Hue/Saturation (Command + U) or the Levels window to accomplish that. It's your choice (6b). 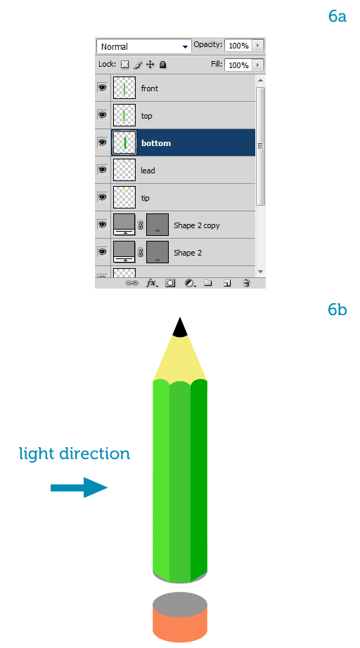 Let's shade the tip now. Add a pale yellow-to-orange horizontal Gradient Overlay style to the "tip" layer (7a) so the right part, which will be the bottom once the pencil is rotated, is darker (7b). To enforce the lighting we must also brighten the left side of the "lead."

Lock its transparency so you won't be able to paint inside the existing pixels (7c). Hit B to select the Brush Tool and make sure the color is pure white. Then paint a single stroke along the left side with a big, soft, white brush, while keeping the opacity to a low number (7d). This adds a nice, subtle highlight.

Type D to activate the default colors (black and white). Create a black square on a new layer between the "tip" and the "lead" and name it "wood texture" (8a). Go to Filter > Render > Fibers and choose the same values as in image 8b. The resulting texture (8c) hides the "tip" so we reduce the Opacity to 50% and choose the Overlay blending mode (8d). The wooden tip now has a nice color and a realistic grain (8e).

All we have to do now is deform the "wood texture" so it follows the contour of the "tip." To do that type Command + T to activate Free Transform, then right-click the texture on the canvas and choose Perspective. Drag the top anchor points inward to fit the texture to the "tip" (9a). Take a look at what we have so far (9b). We want to add a bit of shininess to the pencil so let's paint the main highlight on the "tip" on a new layer, using a soft, white brush. Reduce the highlight's opacity to let the texture shine through (9c).

Select the Burn Tool (O) from the toolbar and set it up as in image 10a. It's important to use a large, soft brush and very low opacity. Use several brush strokes to darken the top and the bottom of all three sides, making the bottom darker (more brush strokes). Try it on the "bottom" layer first to get a feel for the Burn Tool. Once you're satisfied with the shading (10b), repeat this for the remaining two layers. Make sure the pencil becomes progressively darker as you go to the right and to the bottom (10c).

Let's make the edges pop out. With the guides showing and Snap active, draw a path along the left vertical side (11a). In the Paths palette double-click it to name it "edge" (11b). Now set up a 3px, hard-edged, white brush (11c). Create a new layer on top of the three sides and select it.

In the Paths palette right-click on the "edge" and choose Stroke Path. From the pop-up window select the Brush and toggle on the "Simulate Pressure" option (11d). This is what it looks like: a nice, tapered highlight (11e). Name the layer "edge." Create a second edge by copying the first one. Make the copy a bit transparent since it's closer to the bottom where less light arrives (11f).

On to the metal clasp now. Hide the "body" and "tip" layers. Darken the top ellipse. It will be the hole where the wooden pencil inserts. Fill in the lighter ellipse to close the gap (12a). Apply a Gradient Overlay style with many highlights to get a nice metal surface (12b).

Duplicate the "hole" ellipse. Name the copy "ring," reduce its Fill to 0% then add a dark Stroke (13a). Erase the top half (13b). Now add a white Drop Shadow (13c) to simulate a highlight (13d). Make a bunch of copies of the "ring" and arrange them over the metal clasp (13e). Group all similar layers together.

Before we move on let's take a look at the layer structure we have. It's important to keep files tidy. We can easily toggle layers on and off, which speeds up productivity. It also makes complex layer structures less scary to look at (14a).

Move the "CLASP" group above the "BODY." Add an internal shadow by painting with a soft, black brush on a separate layer (14b). To complete the pencil we have to shade the eraser. First let's scale it down a bit so it's smaller than the metal clasp. Then lighten the left part and darken the right part. How do you do that? Just like we did for the "lead," lock the eraser's transparency then paint with low opacity brushes along the edges, white to lighten and black to darken (14c).

The pencil is complete. Select all layers and group them as "PENCIL." Duplicate the group and hit Command + E to merge all layers into one. Keep the original group for later adjustments, just in case, but work on the single layer from now on (15a). Rotate the pencil 135 degrees clockwise so it points down diagonally (15b). Lock this layer to avoid messing it up. You can see now that the shading suggests light coming from the top. Let's keep that in mind.

Using the Pen Tool (P) draw the top page of the sketchbook (16a). The sketchbook's orientation nicely contrasts that of the pencil for a balanced composition.

Shade the page with a soft gradient, from almost white (top) to a light gray (bottom) (17a). Using the Pen Tool again add thickness to the sketchbook. Use two shades of gray, making the bottom darker (17b).

Lock the transparency of all three layers (page, side and bottom). Using soft, black brushes with low opacity darken the page at the top and bottom. Also darken the bottom thickness near its center. These color variations suggest a slight unevenness that makes the objects look a bit more natural (18a, 18b, 18c).

Using the Line Tool (U) set to white, draw parallel lines over the bottom and side (19a and 19b). They represent the stack of pages, of course, so adjust their opacity to your liking. Group them together once you're done. 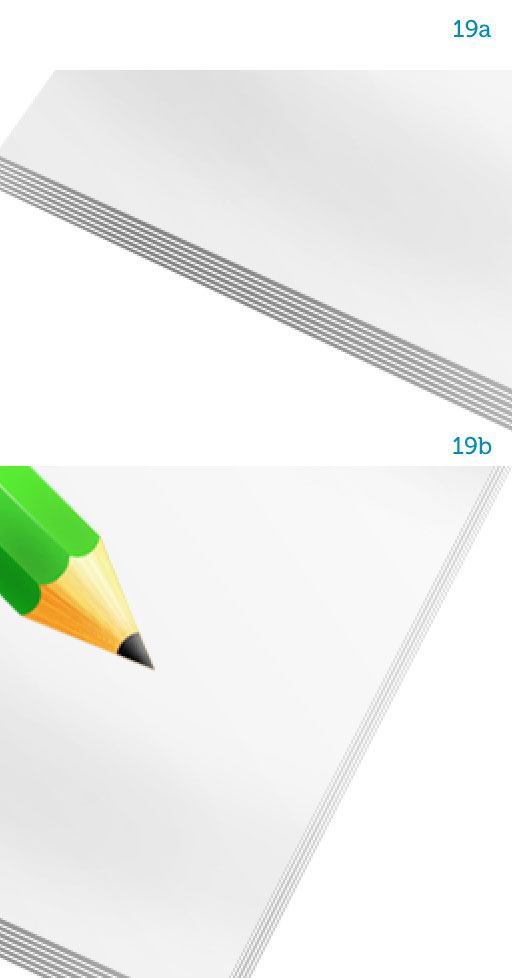 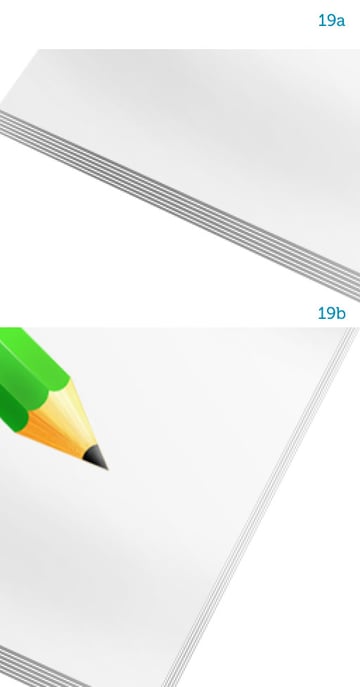 You can now duplicate all the sketchbook layers and merge them together. Again, keep the original layer structure for any changes you require down the line. When creating icons you optimize the smaller sizes (48px, 32px, 16px) by eliminating those elements that won't be readable anymore, for example the page lines. Add a Drop Shadow to the sketchbook using a simple layer style. 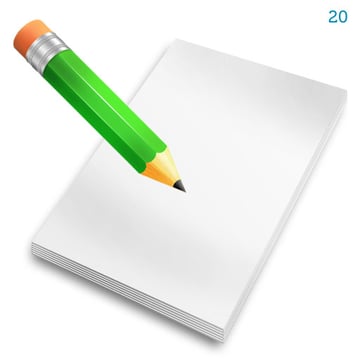 The light comes from the top so the pencil projects a shadow onto the sketchbook. Duplicate the pencil layer and turn it black. I usually hit Command+ U to bring up Hue/saturation and move the Lightness slider all the way to the left. But everyone develops a unique workflow. 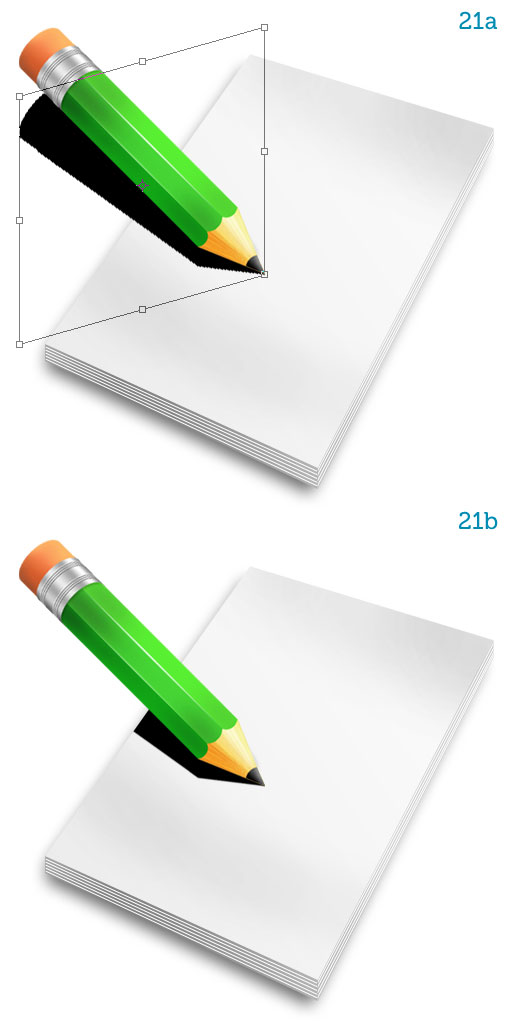 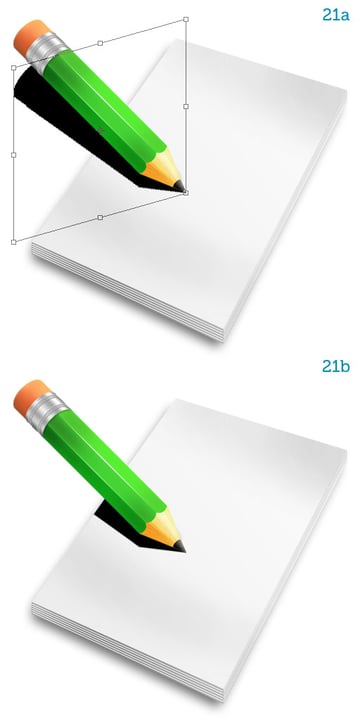 Reduce the shadow's fill to 0%. Add a Gradient Overlay, making the left color stop transparent and the right color stop black (22a). The shadow now fades away from the tip of the pencil to the border of the page. Blur the shadow using the Blur Tool. The farther from the tip, the blurrier (22b).

The icon is now complete. All we have to do now is draw a little sketch on the page. I'll leave you free to draw whatever you want. Just pick a brush with a little texture from the Brush Presets (hit F5) and you're good to go. 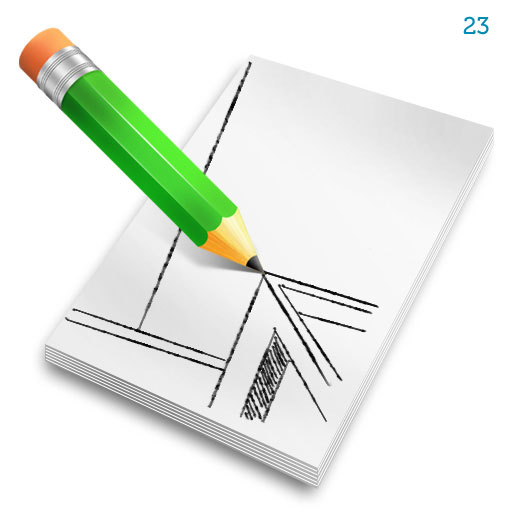 The first icon in this "Creating a Set of Digital Painting Icons" series is complete. We have learned to use subtle brush strokes to give presence to otherwise plain looking objects. We also employed a simple but effective compositional trick to fill the square canvas nicely. Stay tuned for the next tutorial in this series, which is the camera icon!