Create the Classic Look of an Engraving in Photoshop

Give your illustrations the traditional look of an engraving without actually drawing all those pesky little lines! The technique is simple, but requires some experience with the Displace Filter and knowledge of basic shading techniques. The result will have people thinking you spent hours and hours on your design... which you probably will, but at least you don't have to actually engrave anything!

Before we get started, let's take a look at the image we'll be creating. As always, the layered Photoshop file is available via our Psdtuts+ Plus membership. 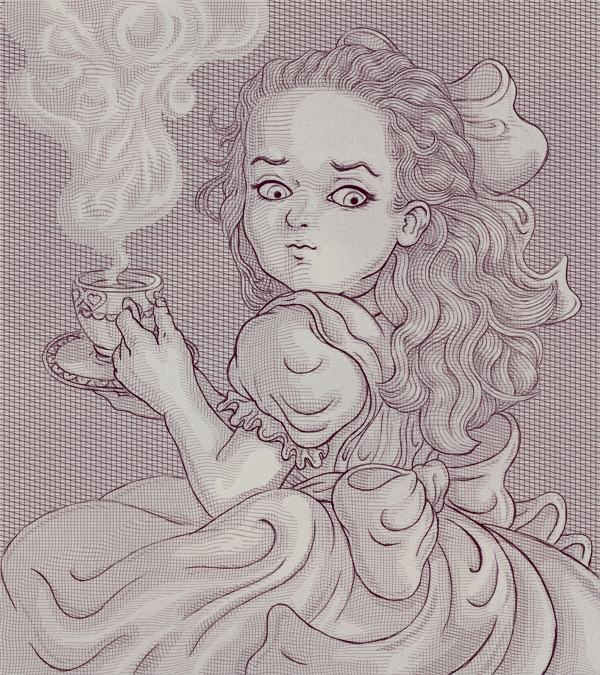 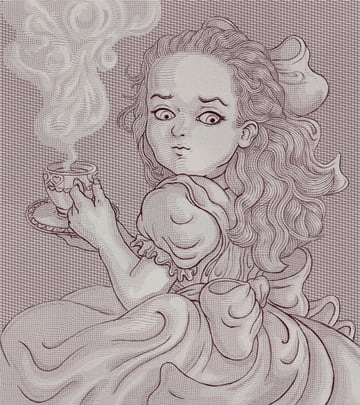 The printing technique known as engraving, is a process by which an intaglio matrix (or metal plate) is incised with a design, then is used for printing images on paper. By using Displacement Maps in a creative way, I was able to recreate that look. I began with an illustration. For this tutorial, I sketched a picture of Alice from the famous Lewis Carroll story, and inserted it on a layer named "Line Art." 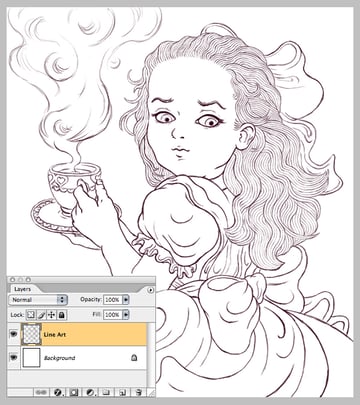 In an engraving, the lines follow the contour of the form, giving it a three-dimensional quality. The same thing can be done with the help of the Displace Filter. The filter uses a grayscale Displacement Map to calculate the amount of distortion it will apply to the texture. In general, darker values make the texture appear to recede, bending the texture downward, while lighter values appear closer, bending upwards.

Creating a Displacement Map is simple.

Yes, I know Alice looks deranged in the second frame, but she has the Mad Hatter and March Hare to deal with, so she's bound to have her moments. Before I could use the Displace Filter, I needed to make a set of engraving textures that could be wrapped around my illustration. I made one horizontal, one vertical, and one angled texture, giving each its own layer named "Horiz.," "Vert.," and "Angle," respectively. These were placed in a group named, "Textures." They were each large enough to cover the entire drawing.

In order to keep the textures within the boundaries of my illustration, I selected the contents of the "Flat" layer and used it as a Layer Mask for the entire "Textures" group.

Finally, I was able to put the Displace Filter to work. I began by filtering the horizontal engraving texture. While putting the "Horiz." layer in focus, I selected the Displace Filter from the menu (Filter > Distort > Displace). Keep in mind that the size of the image you work with will determine which values are placed in the Horizontal Scale and Vertical Scale options.

Since I was working with a large image and a texture containing horizontal lines, I gave Vertical Scale a value of 50, and nothing for Horizontal Scale. The remaining options for the Displace Filter were unimportant for this application, so I clicked OK.

Keep in mind, the result of the filtering process does NOT have to be 100% perfect. There will always be a few rebellious pixels here and there. When a good 75-80% of the lines meet your satisfaction, then proceed. These were my results so far! 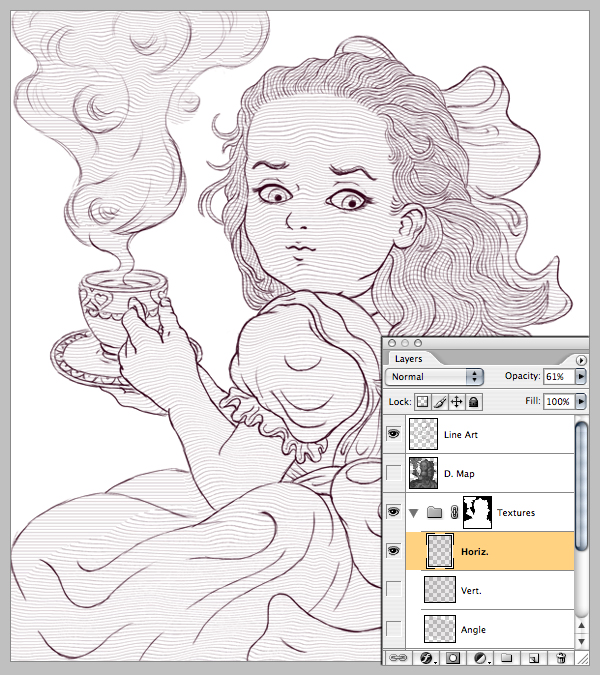 I repeated the same procedure (using the Displace Filter) for the "Vert." layer, this time choosing a Horizontal Scale value of 25, while leaving Vertical Scale set to 0. I did not displace the "Angle" texture, for this particular illustration.

If you are unhappy with the results of the filtering process, you can alter your Displacement Map and/or the Vertical Scale value of the Displace Filter until the texture wraps around the form properly. Without a Preview option on the filter, you will have to gain experience with the way the filter behaves before you can predict its output. This may be challenging at first, but things will eventually become clear.

After using the Displace Filter on all of my engraving textures, it was time to selectively remove parts of each texture. I used the textures to define the following areas of light and shadow:

I began to define these areas by duplicating the "Flat" layer. I renamed this layer "Shadow," and created the four areas of light and shadow listed above. I kept each area perfectly flat, using the Lasso Tool (L) and Paint Bucket (G).

As you can see, I relocated the core shadow from its normal position (near the direct light), to the opposite side of the form (closer to where the reflected light would normally appear). I found that this produced the best results due to the fact that there was no blending between areas of shading. I also broke the rules of light and shadow wherever I felt an area needed emphasis. 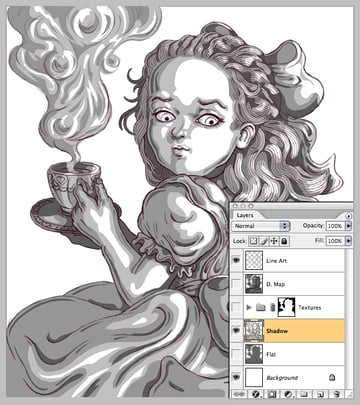 I began to selectively remove parts of the textures. It was really exciting seeing the image come together!

With the Magic Wand Tool, I selected the areas of direct light (the whitest parts) on the "Shadow" layer. I inverted the selection (Select > Inverse) then went to the "Horiz." layer and created a Layer Mask from that selection. This revealed the texture on all parts of the form other than the whitest value.

Next, on the "Shadow" layer, I selected both the areas of direct light, and the areas of lightest shadow (the two lightest values). I inverted the selection, chose the "Vert." layer, and I masked that layer.

Finally, while on the "Shadow" layer, I selected the very darkest value. I moved focus to the "Angle" layer, and created a Layer Mask from that selection.

At this point, I adjusted each layer's opacity until the values were well-balanced. Also, I readjusted the "Shadow" layer. 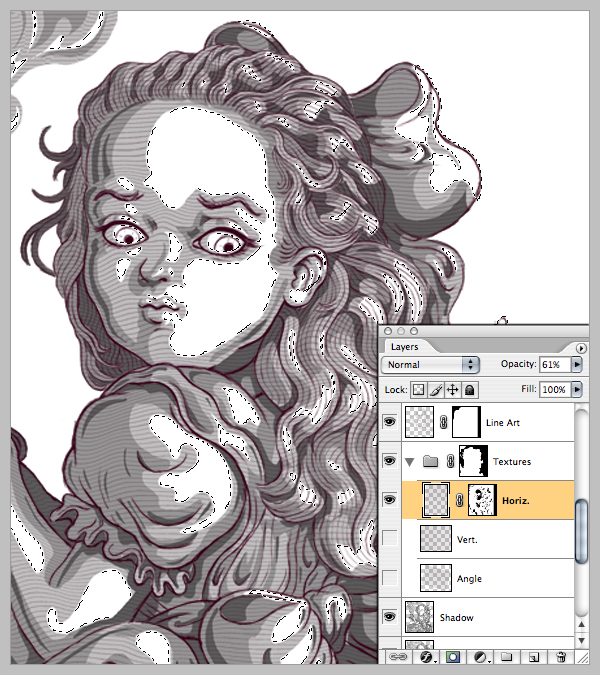 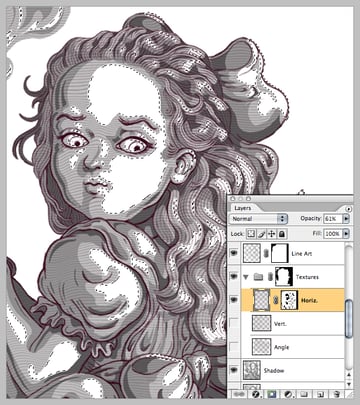 To complete the illustration, I created a background using the three engraving textures. I selected the "Flat" layer, then masked this background with the selection. Underneath these layers, I used the Brush Tool (B) with a low Flow percentage and the Mode set to "Dissolve." I sprayed some random gray and maroon tones over a flat gray background. 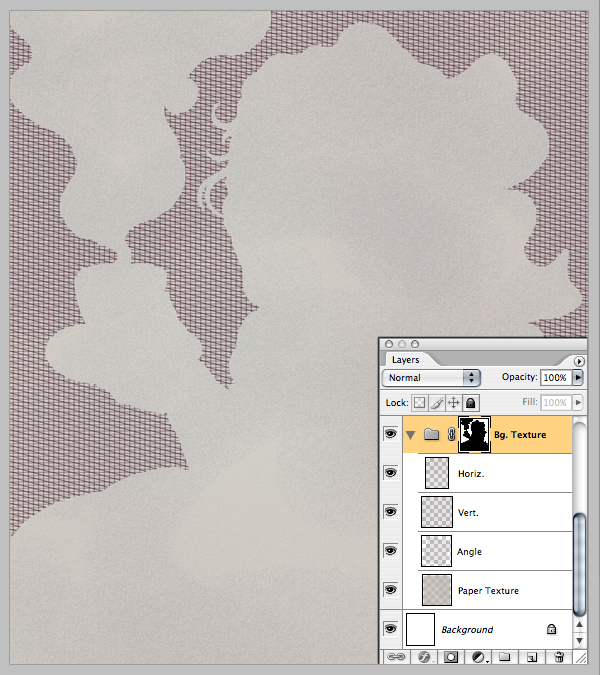 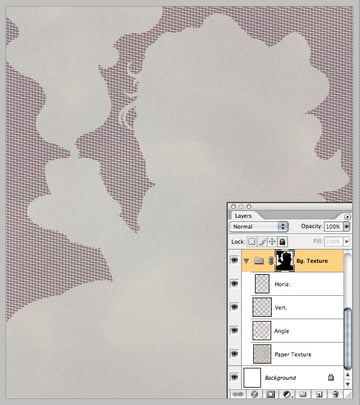 Finally, my illustration was finished! This tutorial shows how the look of engraving can be reproduced in Photoshop. By using different patterns, you could mimic the look of a woodcut, crosshatch, stipple, or almost any other classic technique. Your imagination is the only limit!

Let's take a look at the final image. It looks pretty darned good, if I do say so, myself!

DrawingAdobe Photoshop
Did you find this post useful?
Yes No
Would you like to provide feedback (optional)?
Cancel Submit
Want a weekly email summary?
Subscribe below and we’ll send you a weekly email summary of all new Design & Illustration tutorials. Never miss out on learning about the next big thing.
Sign up

Omara Kurzdorfer
I'm a comic artist and graphic designer living and working in San Diego, CA. I've always loved drawing, so Photoshop and my trusty Wacom tablet are my favorite tools of the trade. I am always searching for new and exciting ways to create beautiful artwork.
Download Attachment