Sometimes, all it takes to create a stunning piece of art is a stock photo, a bit of creativity, a great idea, and some time. Today, I will demonstrate how to create a piece of art that I created titled, "Beauty of Gold." Let's get started!

Let's start by creating a new document in Photoshop, I used A3 format but it doesn't really matter what size you use. I always find it easier working in high resolution because it's easier to add the details. After that, search for a nice piece of stock art. I bought mine on Dreamstime.com but you could also try DeviantArt or any other site. Place the stock on your canvas as shown below. 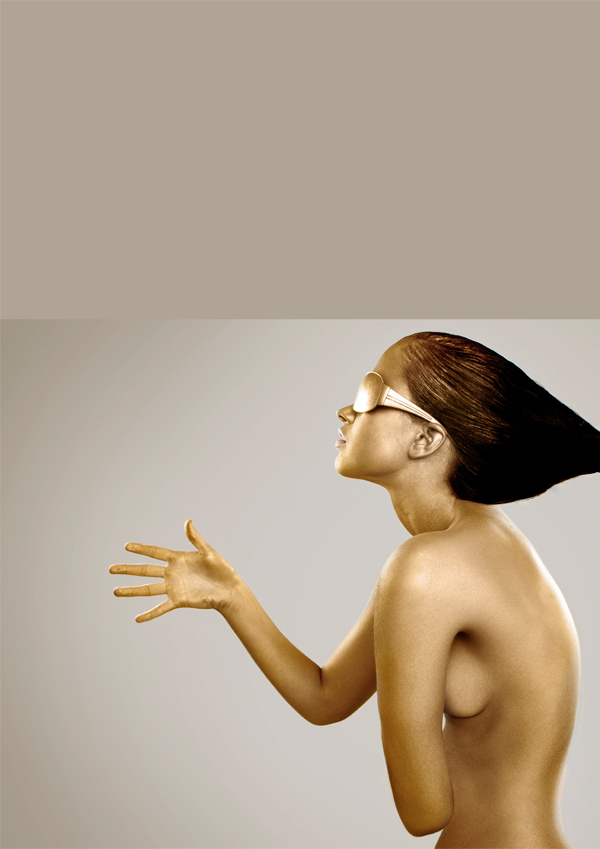 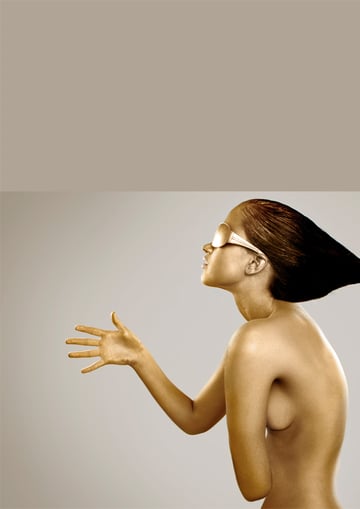 Now, have a good look at your stock, this technique is always easier when you have a stock with a lot of highlights and shadows. I have circled these areas in red and green below. It's not necessary to draw the lines yourself. I just wanted you to understand what I meant. 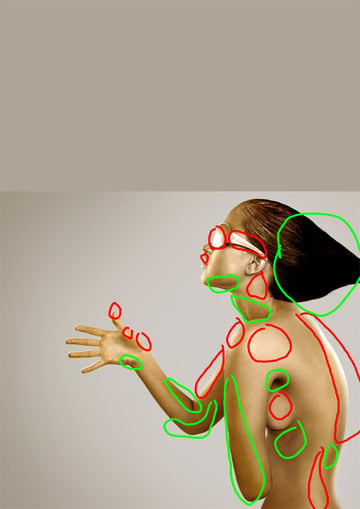 Take out your 'Ellipse Tool' and begin to create circles that will form the shading. 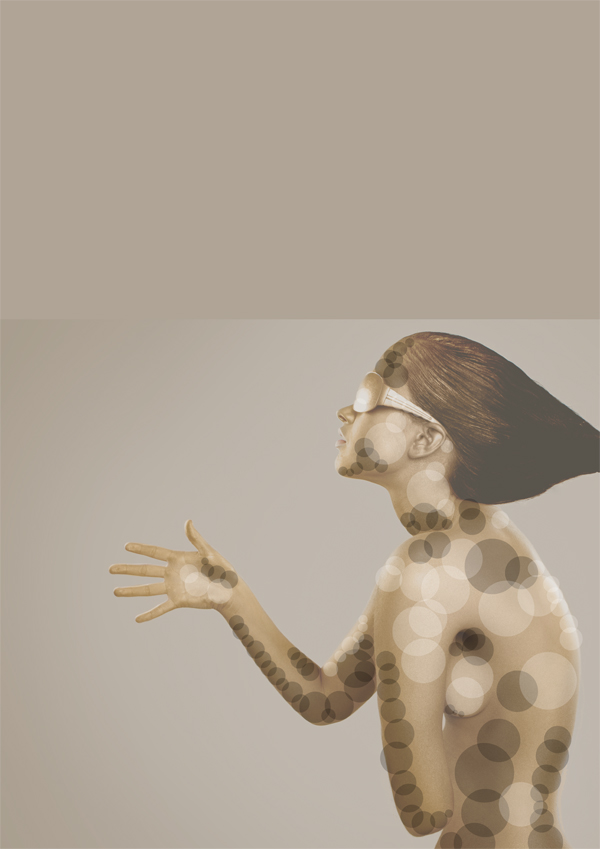 Set the opacity of the 'Ellipse Tool' to about 20%. Now start filling in the dark and light areas with white and black. Don't worry about the details yet, just create the basic shading like I did. (I set my stock to 50% opacity so that the circles are visible). 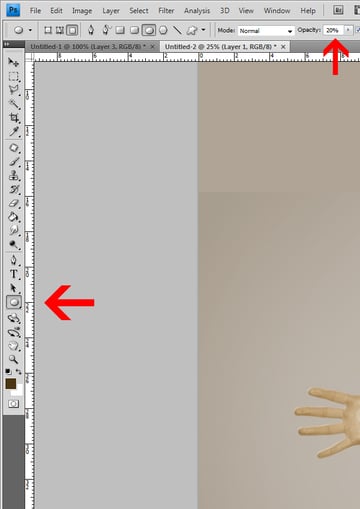 Work from large size to small size! This might seem a bit boring but in the end you will get the best results! As you can see below I've already added some very small details on the face just to show what it will look like on a later stage. (The stock is on 10% so that the shading is more visible). 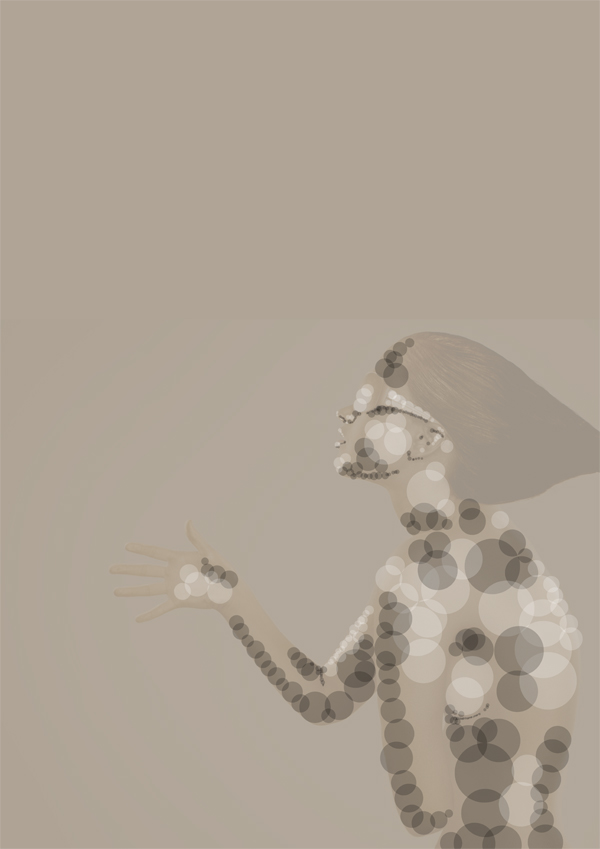 Repeat this same step again, but this time add some circles around you stock to create some flow, this will be used for effects later in this tutorial. If some parts don't look great, don't worry, it can be fixed later on. Create a new layer and add more circles. I changed the opacity of the stock to 0% this time so its easy to see what I did and how much detail I added.

Now, we're going to add some color. I decided to go for a golden/brown color which is about the same as what my stock had. Using the 'Ellipse Tool' start adding light colors on the light parts and dark colors on the darker parts. 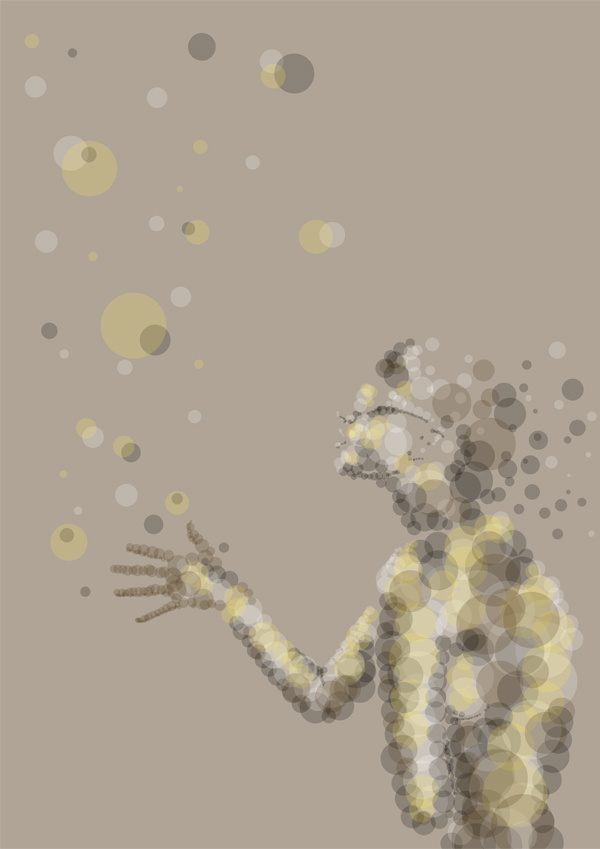 Reduce the opacity of the color layer to 35% to bring down the colors a bit, after add more black and white shading on a new layer.

Our composition is finally starting to take shape, but its still a bit hard to recognize some parts of the stock. Take out your brush tool and apply these settings.

Now start brushing on the darker and lighter areas that we showed in Step 2. Make sure you don't go outside the lines of the stock. Set the opacity of your brush to 30%, only use a black or white brush. 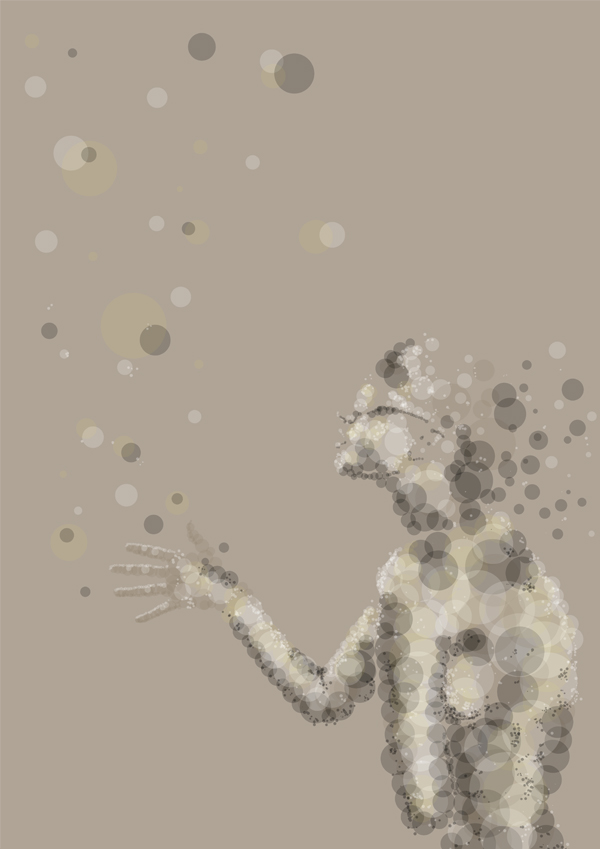 Here is what your layer stack should look like. 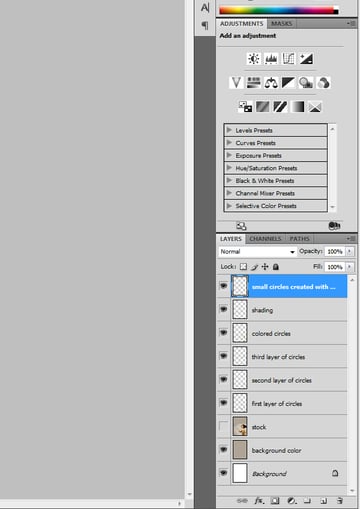 Duplicate all the layers above the stock, after that, merge them. Now duplicate the layer of your stock and place it at the very top. Now, create a clipping mask on the layer below it (this should be the merge of all the circles).

After this I merged the top 2 layers and set the result to overlay (20% opacity), then I duplicated that layer and set it to soft light (80% opacity).

As you can see there are still some areas that need more details. See the image below to understand which parts I'm referring to. 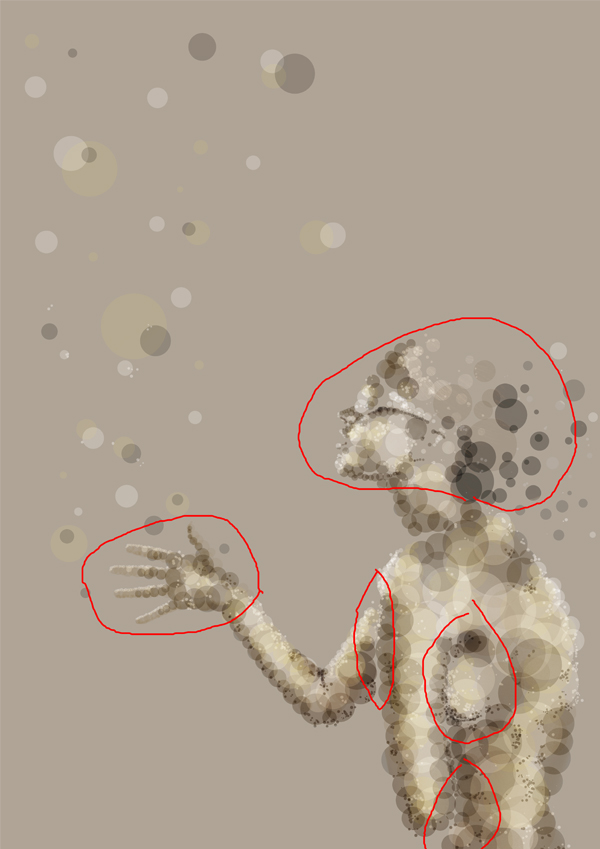 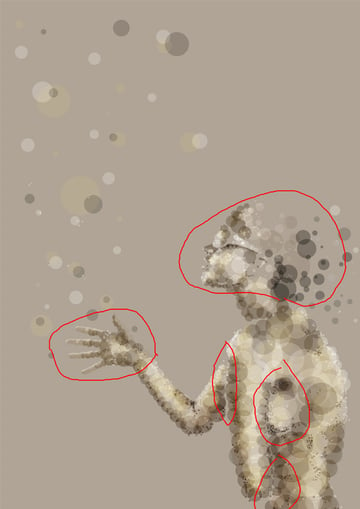 For this step we have to take out our 'Ellipse Tool' again, we're now going to zoom in on each part we just highlighted and work on the detailing, add black and white where its needed! Keep repeating this step on the same layer until you are satisfied. (Our Ellipse Tool is still on 20% opacity).

After this we want to start working a bit more on the flow. As you can see when looking at my artwork, the main highlights are on the top left of the stock, so we're going to add a gradient (black to white) where the bottom right is black and the top left is white. After that, set it to soft light and keep the opacity on 100%.

Things are starting to come together now but the background is still really boring. Since we want to keep the focus on the foreground we're going to add a really soft background. I usually do this by taking a big stock photo and blurring it, then setting it to soft light. This time I used the stock of a desert which I bought on dreamstime.com (you should also be able to find good stocks on sxc.hu). Place it as shown below. 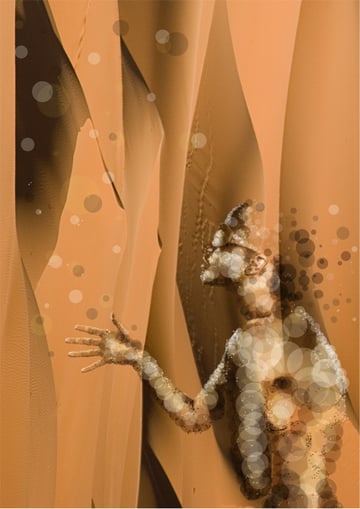 Now go to Filter > Blur > Gaussian Blur and set the radius to 65. Set this layer to soft light (100% opacity), now duplicate that layer and set it to 15% opacity.

Now, we're going to add more effects, at the moment all we have are flat circles which are a bit boring. I created some special circles with gradients etc. which I'm going to randomly place in the artwork. Its best to experiment with creating circles because it depends on what fits the artwork best.

Note: I put a gray background behind the effects in this screenshot so they are all visible. These are not on the same layer because then I wouldn't be able to move them around and duplicate them. 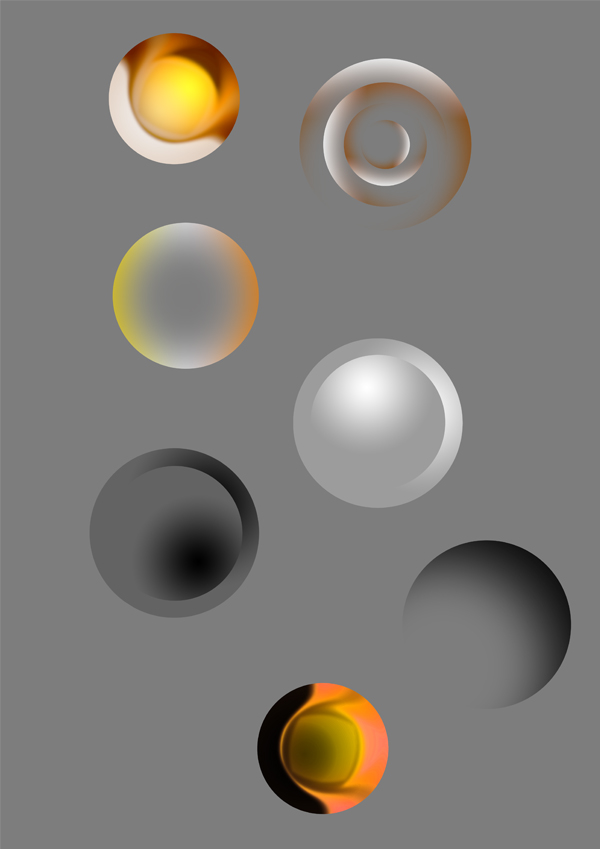 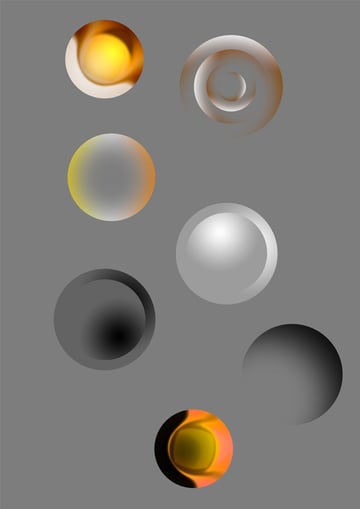 Some parts still look a bit flat. We're now going to add highlights but also darken the dark areas a bit more. A very simple way to do this is by soft brushing on a new layer and setting it to soft light. I did this with a 550px soft brush (black and white), which I set to soft light 50% opacity.

After that, we're going to add very small details. I did this with a soft brush and hard brush with a small diameter. Set the scatter and spacing to high and brush in random areas. Do this with different colors but also with varied blending modes such as screen, overlay and soft light.

We're coming to an end here, I took out my pen tool and a very large soft brush to create lines around some places of my main model. Also, I added some subtle effects to it. Check out the screenshot below what I mean. (Make sure you set it on simulate pressure).

Go to Filter > Blur > Gaussian Blur. Erase all the areas you don't want blurred to improve the focal point. 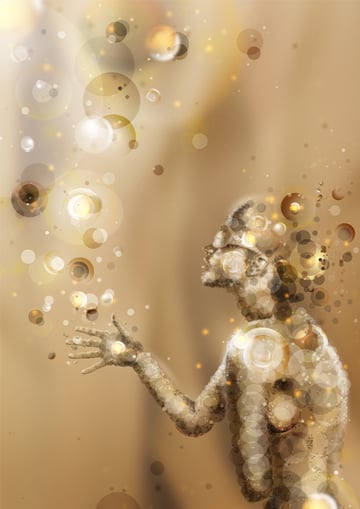 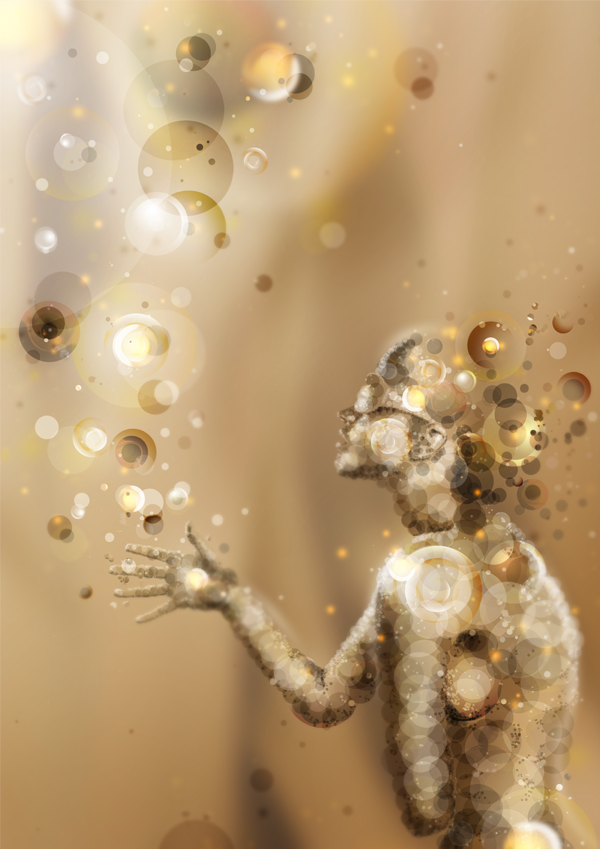 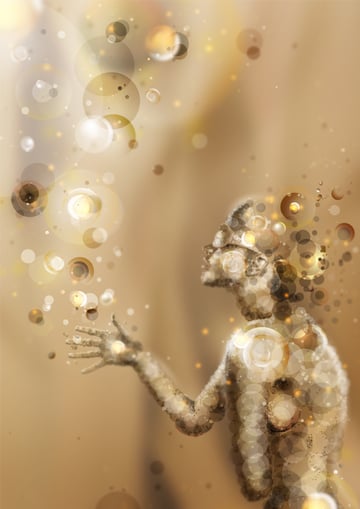 We're almost done now. I applied my image on a new layer and sharpened it. After that I played a bit with the colors/brightness and contrast/hue and saturation. This is my final result. 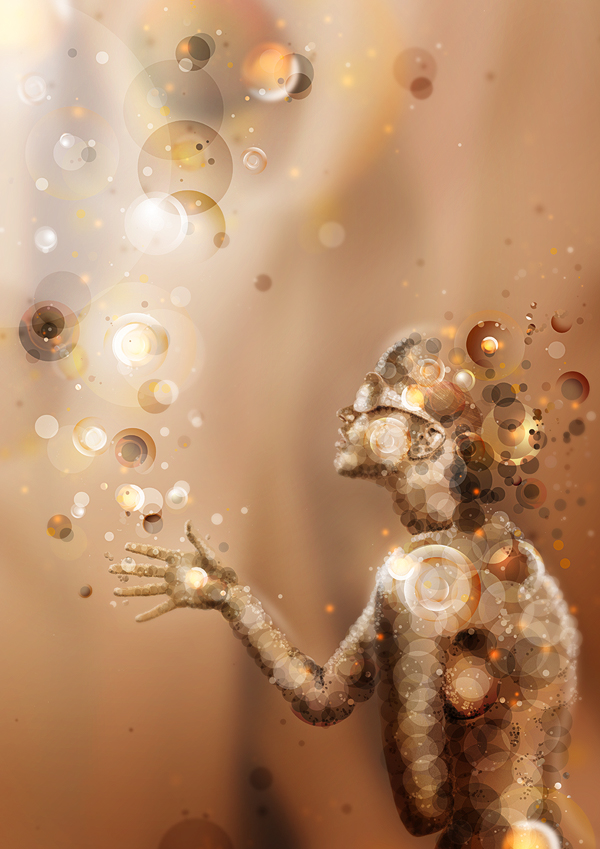 I flipped the image horizontally because for me, it looked better. After that I also added my logo.

Mart Biemans
My name is Mart Biemans and I am a graphic designer and Illustrator from the Netherlands.