Create and Then Shatter a Grid, while Making a Typographic Poster

Let's get our own share of typography with this dark and grungy poster. No, this is not your typical design, as we'll be 'breaking the grid' in hope of creating a dynamic and exciting layout. So grab the usual tools of the trade, Photoshop and Illustrator, and follow these steps into creating your own solution. 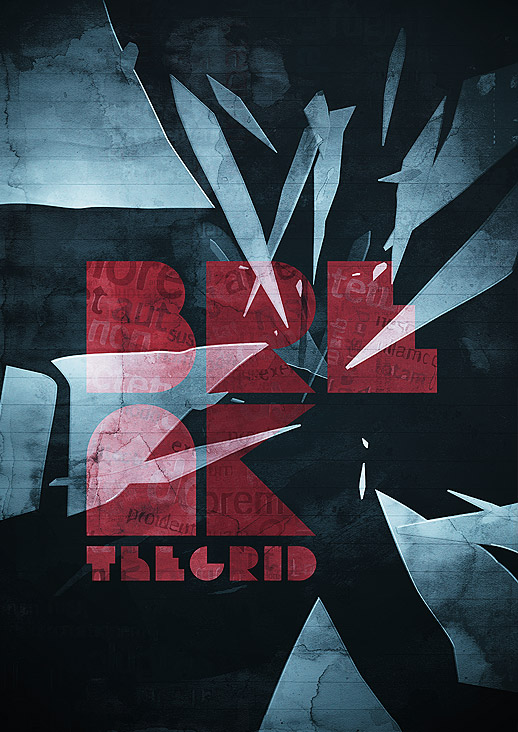 Our video editor Gavin Steele has created a video tutorial to compliment this text + image tutorial.

Ultimately, design is a means of expressing a message, an idea. In order to design, one must acknowledge the fact that design is by no means decoration. In getting your point across visually, you strive to find the right balance between what is beautiful, aesthetic and what is functional and useful. I wanted to explore a visual interpretation of what is written, not only through type, but also by furthering the concept through visual illustration, hence the breaking glass.

So what is breaking the grid, anyway? I am by no means an expert in the field, but grid planning, no matter how basic, has been beneficial to me. Sometimes, though, all those symmetrical gray boxes can become boring, and it's up to designer heroics to save the day: breaking the grid.

An important thing to keep in mind, is the fact that a broken grid diversifies and prevents predictability, but still contributes to a unified design. The intentional imbalance is controlled and managed by the rest of the elements. Even though you may have asymmetrical proportions, you still find balance in the end. That's what we're aiming for - we'll break a typical square grid through an unusual typographic layout, and balance it in the end by the means of carefully planned bits and pieces of glass.

A practical example of breaking the grid can be seen on this actual website. Notice that both the Psdtuts+ logo, and spoon come lower than the clearly visible horizontal line. This is all in an effort to avoid monotony, through subtle detail. Had this been a classic grid, the logo and spoon would come not a bit lower than the dividing line.

Start a new Photoshop Document using an A3 paper size at 300 dpi. To select the A3 setting, choose International Paper from the drop down menu. As soon as you begin grab the Gradient Tool (G) and create a linear gradient from top to bottom using a medium gray (#837e7e) and a dark one (#3f3f3f).

Now let's start planning the layout of the design. In order to create a basic grid that we'll begin with, go to Edit > Preferences > Guides, Grid, Slices, and Count. Look up the Grid section, and make sure that your grid is divided by 2,5 cm with a single subdivision. You may also need to make it visible by going to View > Show > Grid. 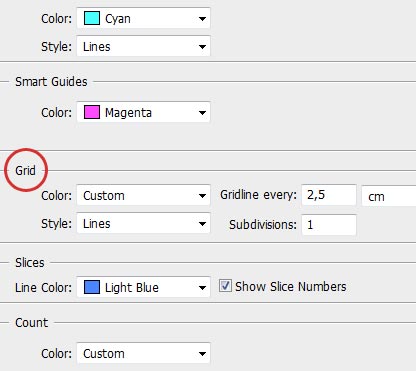 It's time to plan the focal point. I placed mine one square off from the center, so that the piece will have a stable foundation. Keep in mind the fact that every composition needs balance, especially one in which you are experimenting with asymmetry. It all depends on the feeling you have planned for: if the box is higher than the center, it will feel like it's floating, while being under suggests a static environment.

The focal point, and anchor element of this piece is type. After all, this is a typographic poster, is it not? The font should also reflect the concept. Since this is all about grids, then the font itself should be minimal and intensely geometric. Bifurk fits the job description, and we'll use it here. If that's not a good enough argument, well it's free too, so it makes a good choice for a tutorial!

Use the grid to plan your layout, and type in your letters individually by making a new layer for each letter. That way, it will be easier to adjust the spacing in between the letters. I used a square shape to plan the spacing. Create a square custom shape with the Rectangle Tool (U), while holding Shift, and slide it in between the letters. By doing this, you are assuring a good optical alignment. 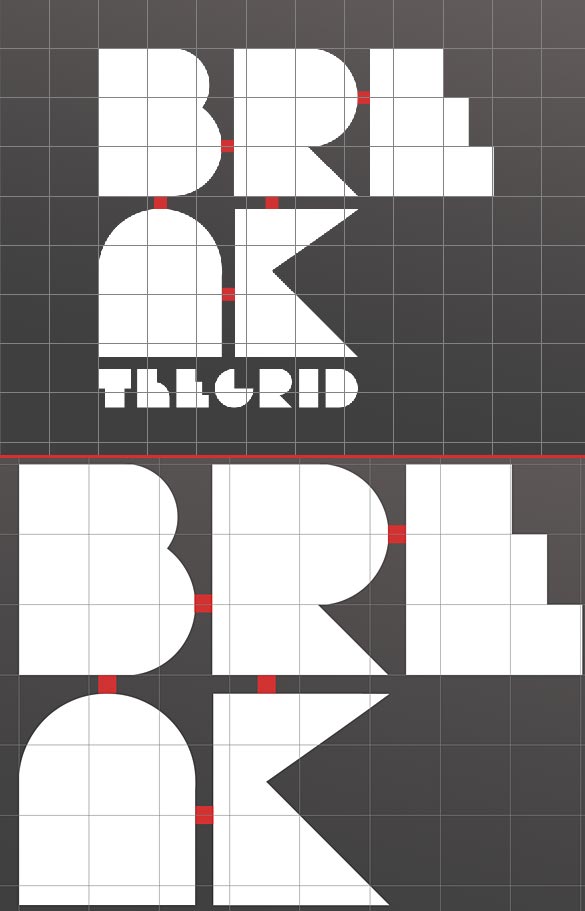 At this point, we'll change the colors of the text. Make subtle variations of this washed up red: d05252. Note: I also activated and created guides, to make the layout more clear. 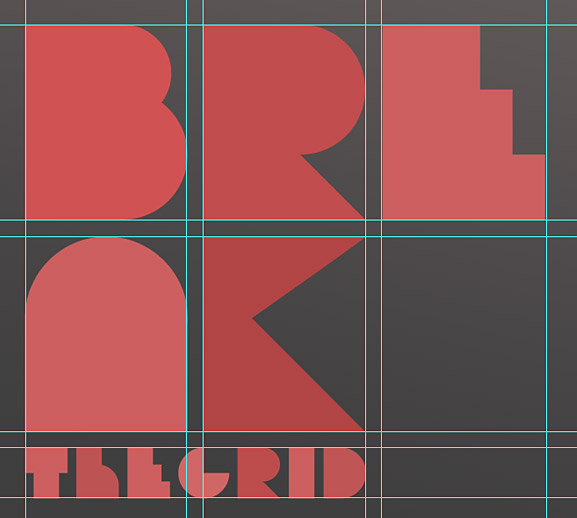 We're going to give the letters a texture now. The texture will be made by a word cloud using Lorem Ipsum text, which is closely associated to graphic design. You can make your own cloud, or use this really nifty online tool called Wordle. It's a word cloud generator, and it's what I used here. Head over to their site and click on the Create button. Paste in some dummy text and generate a cloud. Keep randomizing until you find the best shape, and select Telephoto as a font, and Heat as the color selection. You can change these settings using the buttons you'll find above the cloud.

Now we're going to Live Trace this into a sketchy style type treatment. So take a screen shot of the cloud, and paste it (Command + V) into a new Illustrator file. Once again, you'll need Illustrator in order to Live Trace an object. Go to Object > Live Trace > Tracing Options. Use Color and 256 colors. If you're looking for a more precise execution, adjust the settings found in the menu.

In order to trim off the excess elements, like the web interface and white background, you'll need to Expand the newly live traced object. Press the Expand button; you'll see it once you have the object selected. 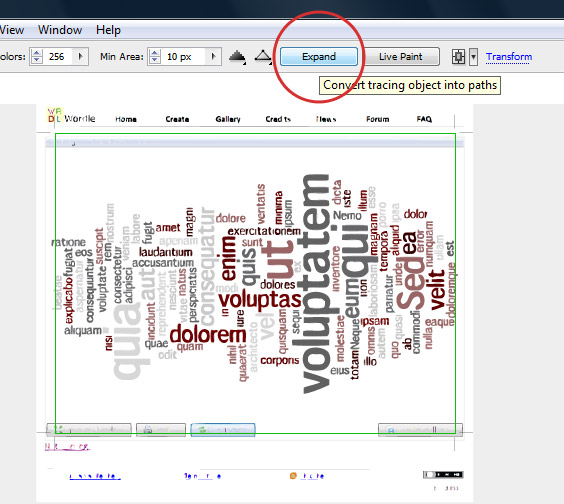 Using the Direct Selection Tool (A), drag and delete all the excess elements. An easy way to get rid of the white found inside the letters, is to select a white shape, and then go to Select > Same > Fill Color. Press delete, and that will be the end of your hassle.

Next, copy it (Command + C) and paste it (Command + V) into your Photoshop project. Paste it in as a Smart Object, so that you can freely expand and contract it without losing quality. Make it a Clipping Mask by holding Alt and clicking in between the Smart Object's layer and the letter's layer.

I also used the cloud in other parts of the design as a texture. The only modification you'll need to make is to adjust the layer's Opacity to somewhere around 15%.

It's now time for the more laborious part: creating the broken glass. Go back to Illustrator and draw broken pieces of glass using the Pen Tool. Keep a rectangular shape as a reference. Fill them with this color: 757575. Make subtle dents that follow the basic shape, and remember that glass cracks are not perfectly straight.

Make a new layer and using one of the triangles as a reference, make a more fragmented version. Be sure to replace it with the old one, once you are finished.

Select one of the pieces and go to Effect > 3D > Extrude & Bevel. Follow the settings shown below. 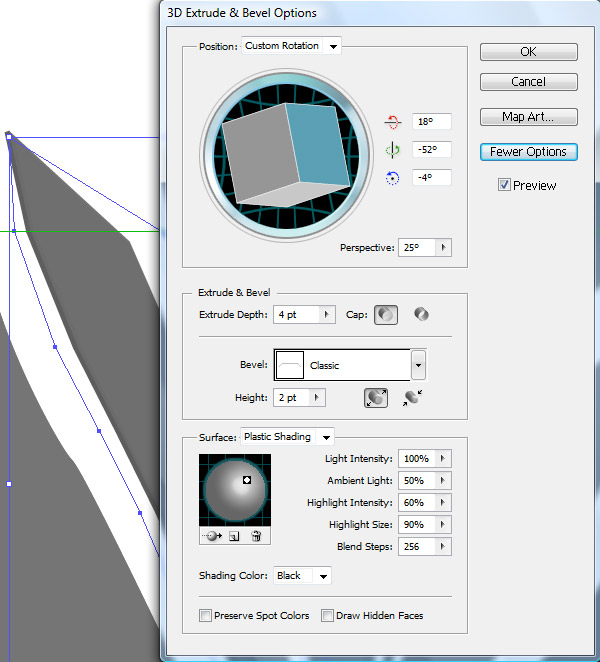 Once you turn it into a 3D object, copy the object and paste it in its exact position (Command + F). Find your Appearance Panel under Window > Appearance and double click on the 3D Extrude & Bevel effect listed there. That will open up the current 3D effect that you have over the glass piece. With this one, only change the Turn Cap On to Turn Cap In. This will simulate a transparency effect by revealing the inner edge too.

Repeat the process for the remaining bits. Start playing around with the layout as well. Make some pieces small, as if traveling in the given space, and rotate them individually. 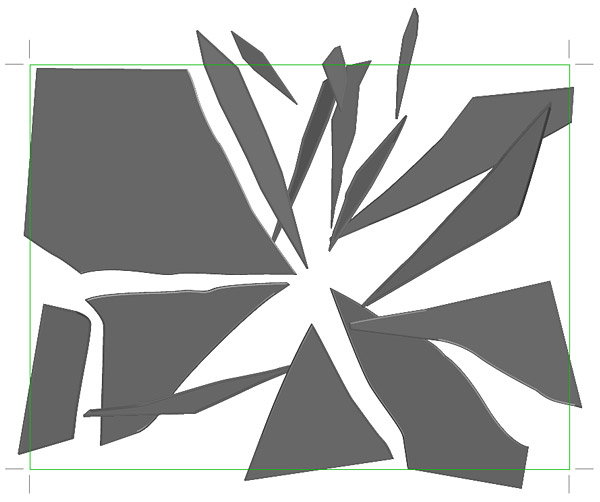 Make some pieces smaller, others larger. Copy small fragments and make them into tiny, chipped bits. Don't forget to alter their 3D settings, so that they don't resemble any previous piece. 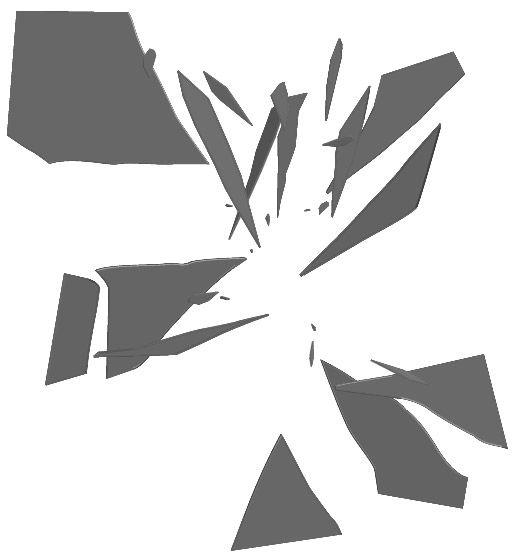 Just as before, paste these into Photoshop. If you notice possible improvements that can be made in the positioning, just double-click on the Smart Object Icon. That will take you back into Illustrator, where you can make adjustments. Once you are finished, just save (Command + S), and go back to Photoshop. After a quick loading screen, your changes will have been implemented. Set the Layer's Blending mode to Hard Light. 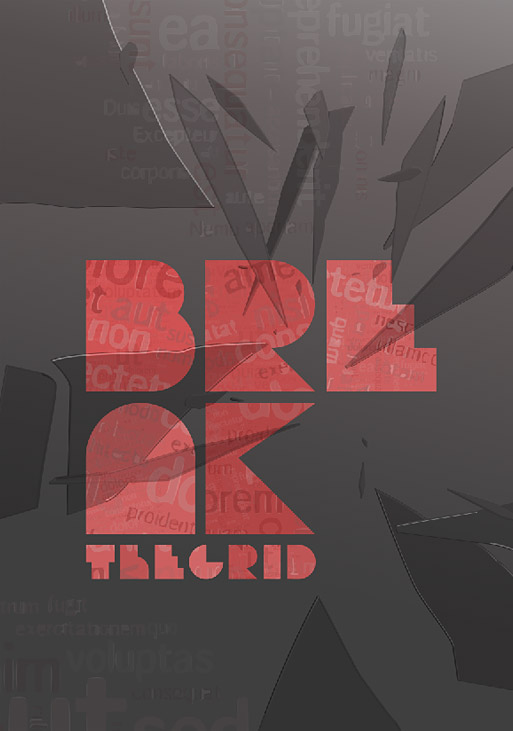 Now create a New Blank Layer (Command + Shift + N) over the Smart Object and make it a Clipping Mask. Use a soft, round brush and paint with white in areas you want highlighted. Lower the layer's opacity depending on how strong you want the light to be.

Duplicate the Smart Object and move it above all the other layers. Set its layer's blending mode to Screen. 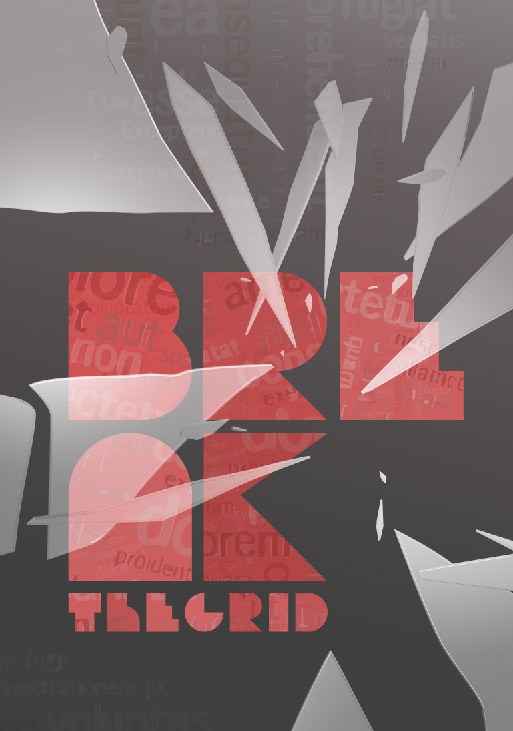 It's time to begin the damage and distortion. Create a new layer above all others and fill it with white. Go to Filter > Distort > Lens Correction. Alter the Vignette settings and drag it down to about -50 or -60. Set the layer's blending mode to Multiply. 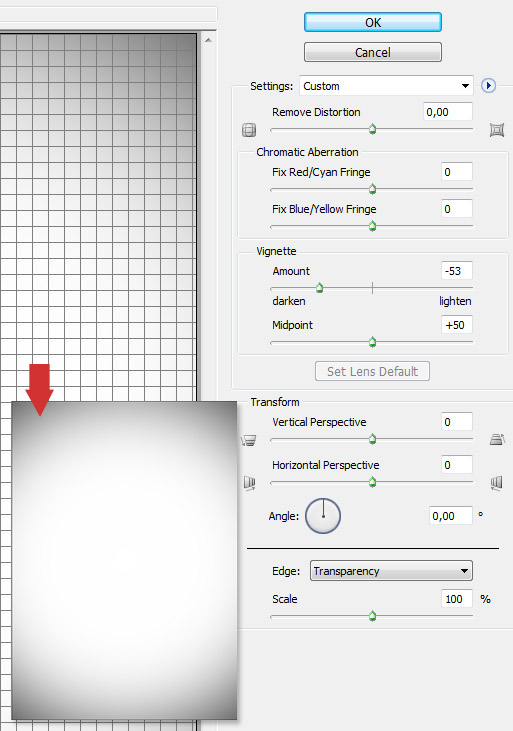 Download this texture and insert it over the whole canvas in a new layer. Desaturate it (Command + Shift + U), set its layer's blending mode to Color Burn, and Opacity to 70%.

Download another texture and paste it in a new layer. Set its layer's blending mode to Color and Opacity to 30%. Go to Image > Adjustments > Hue and Saturation. Change the hue to 158. 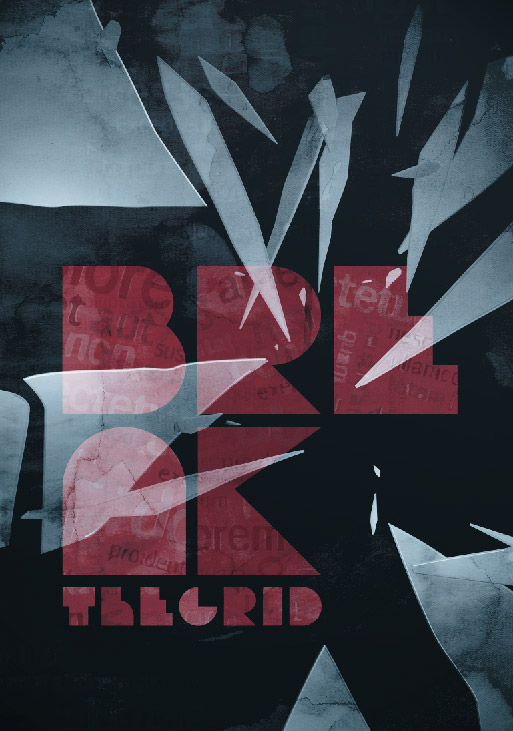 Go to Layer > New Adjustment Layer > Curves. Use the settings shown below. 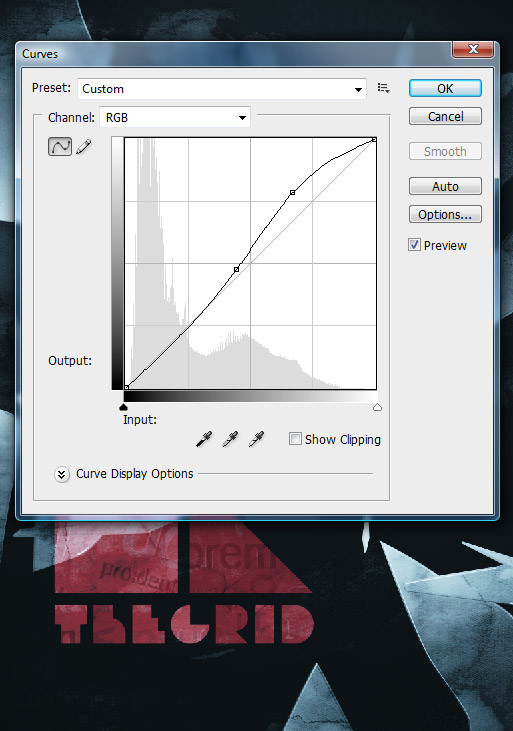 Yep, one more texture... Put this one over everything, Desaturate it (Command + Shift + U), set its Layer's Blending Mode to Linear Burn and Opacity to 20%. The special part about this one though is the inclusion of horizontal lines, which suggest a grid. 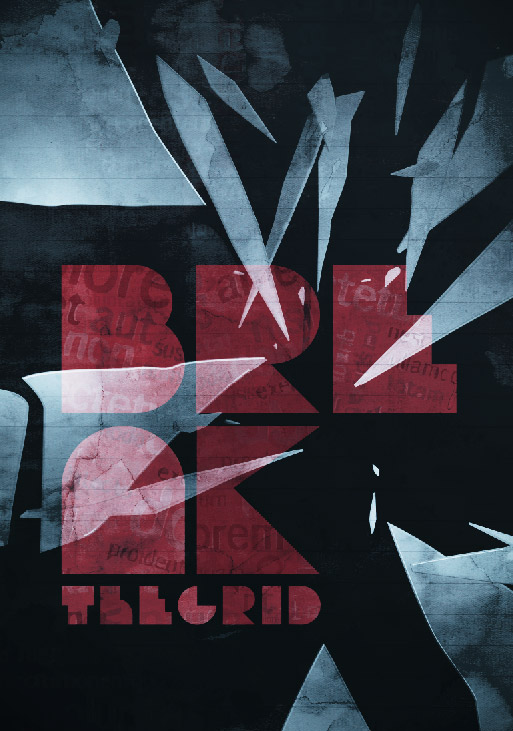 And now, a subtle alteration of color. We'll brighten up the red just a notch, through a Channel Mixer (Layer > New Adjustment Layer > Channel Mixer). Use the settings found in the following image. 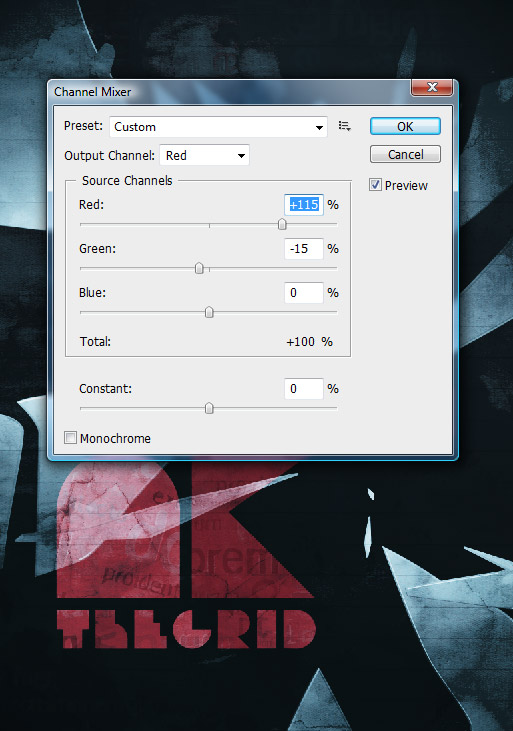 As a final touch up, I added a few more bits of glass behind the text and a slightly bright gray, soft and round gradient behind everything.

Quick Tip: Sharpen your images when resizing to smaller resolutions. You can imagine that quite a little bit of information gets lost when shrinking an image from 5000 px to 600 px. You can give it a whole new feel by sharpening with Filter > Sharpen > Unsharp Mask.

Also, when sharpening grunge, you can get some pretty spectacular results, because Photoshop basically creates subtle bevels. Look at the letters below: Do you notice how the sharpened red letters seem to have a one pixel bevel? Well, it's from sharpening.

Just don't overdo it! Keep an eye out for already sharp edges, as they can be ruined when sharpening.

We are now finished! I look forward to seeing you put these techniques to good use.