How to Create a Surreal Moon Balloons Scene With Adobe Photoshop

In this tutorial, I'll show you how to create a surreal scene with moon balloons. First, we'll build the base scene using images of the sky and a park. After that, we'll add the child and blend him with the background using adjustment layers, masking, and brushes. Later we'll create the moon balloons and paint their strings. Finally, we'll import the tree and use several adjustment layers to complete the final effect.

1. How to Build the Base Scene

Create a new 2000 x 1816 px document in Photoshop with the given settings:

Open the sky image. Drag this image into the white canvas using the Move Tool (V).

Open the background image. Place this image in the bottom half of the canvas and use the Free Transform Tool (Control-T) to reduce the height of it. Remember to convert this layer to a Smart Object.

Go to Edit > Transform > Flip Horizontal to rotate the paths to fit the perspective of the walking child (as we'll see in the next section).

Click the second icon at the bottom of the Layers panel to add a mask to this layer. Use a soft round brush with black color (soft black brush) to erase the trees in the background.

Go to Filter > Blur > Gaussian Blur and change the Radius to 8 px.

On this filter mask, use a soft black brush to erase the blur effect on the paths (especially the left one) and leave it visible only on the background, foreground, and edges.

There are some unwanted details on the background and the left path. Create a new layer and set it as a Clipping Mask. Select the Clone Tool (S) to remove the indicated details.

Add a Hue/Saturation adjustment layer and bring the Saturation value down to -58:

Use a Color Balance adjustment layer and change the Midtones settings:

Make a Curves adjustment layer and decrease the lightness. On this layer mask, use a soft black brush to erase the left path area where the child and the big balloon will be located.

Use another Curves adjustment layer to increase the lightness of the left path area. Paint on the rest to keep them still at the same lightness.

Open the child image. Cut him out from the background and add him to the start of the left path.

Use a Hue/Saturation adjustment layer and alter the Saturation value to -60:

Add a Curves adjustment layer to bring more light to the child. We're aiming to add a big moon balloon, which will create light from above and near the child. On this layer mask, use a soft black brush to keep the same lightness of the shaded areas.

Activate the Dodge and Burn Tool (O) with Midtones Range, Exposure about 30-35% to strengthen the light and darken the shade. You can see how I did it with Normal mode and the result with Overlay mode:

Time to make a shadow for the child. Create a new layer under the child one. Hold down Control while clicking the child thumbnail layer to load his selection.

Fill this selection with black and flip it vertically. Use Control-T to make the shadow narrower and shorter as the light source (moon balloon) is on top and near the child.

Lower the Opacity of this layer to 60% and apply a Gaussian Blur of 8 px to soften the shadow.

Create a new layer and use a medium-soft black brush with the Opacity about 30% to strengthen the shadow under the child's feet.

3. How to Make the Moon Balloons

Isolate the moon from the dark background and place it above the child. Use Control-T with Warp mode to tweak the bottom of the moon and make it look like a balloon:

Duplicate this layer three times and reduce the moon size. Arrange the balloons on both sides and in the top middle area of the scene.

Apply the Inner Glow and Outer Glow to each of the balloon layers. Pick the color of glow to #fcfcfc (default color):

Select all the balloon layers and press Control-G to make a group for them. Change this group's mode to Normal 100%. Create a new layer and use a soft brush with the color #b6baae to paint over the big balloon to add more glow to it. Alter this layer mode to Screen 100%.

4. How to Create the Strings

Make a new layer under the balloons group. Use the Pen Tool (P) to draw a line under the big balloon and then stroke it with a 2 px hard white brush:

Duplicate this layer three times. Move the copies under the other balloons and remember to reduce their size. Apply a Gaussian Blur of 2 px to each of these layers.

Open the tree image and use the Move Tool to add the tree to the right-hand side of the scene.

Apply a Gaussian Blur of 12 px to this layer as it's in the blurred area.

Use a Hue/Saturation adjustment layer and reduce the Saturation value to -58:

Add a Color Balance adjustment layer to add some cyan/blue to the tree:

Create a Curves adjustment layer to darken the tree as it's in the dark corner of the scene.

6. How to Make the Final Adjustments

Create a Gradient Map adjustment layer on top of the layers and pick the colors #251706 and #a9f3fa. Lower the Opacity of this layer to 50%:

Add a Curves adjustment layer to darken the scene. On this layer mask, use a soft black brush to reveal the light around the child and balloons and leave the effect visible only on the edges.

Use another Curves adjustment layer to increase the contrast of the whole scene. Paint on the illuminated details of the child and the balloons to keep their lightness.

Use a Vibrance adjustment layer to enhance the final effect.

I hope that you've enjoyed my tutorial and learned something new. Feel free to share your ideas or comments in the box below—I'd love to see them. Enjoy Photoshopping! 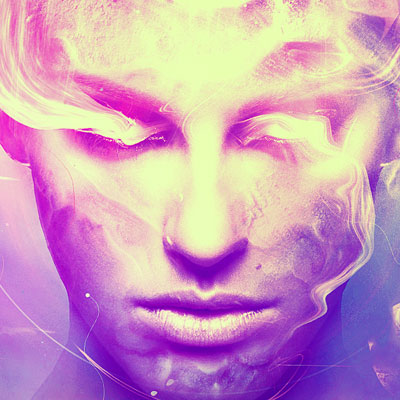