Take typography one step further by having text falling from the sky in a burning inferno. Yes, this is the text-on-fire tutorial to end all tutorials. It uses a little Illustrator for the text and a lot of Photoshop to burn up the screen!

In previous tutorials you've seen two smoke effects that I've created, but let's face it, you can't have smoke without a fire somewhere. So in this tutorial, I will show you how to create a fire effect similar to when a spaceship or comet enters the earth's atmosphere. The image we'll be creating is inspired by a Nike Ad I saw some time ago. I'm not sure what the URL is. If anyone knows it, please link us up in the comments.

It's always a good idea to keep your eyes open for inspiration for effects and designs no matter what you are doing. Graphics are everywhere and you can learn a lot by looking at what other people do. Now on to the tutorial!

First create a new document and fill it with a dark grey. 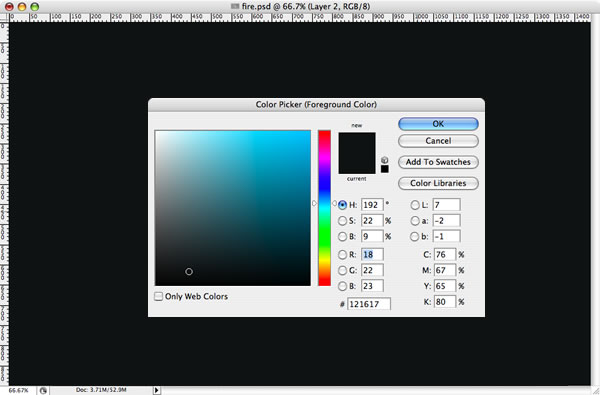 Create a new layer, call it "Clouds," and using the Lasso Tool (L), make a selection similar to the one I've shown below.

Set your background color to a 50% grey and the foreground to a dark grey. Go to Filter > Render > Clouds and, holding the Alt key, create clouds. After that go to Images > Adjustments > Levels, and change the input levels and output levels until you make the clouds neither too dark nor too light (see the image shown).

This layer will be on top of the others. 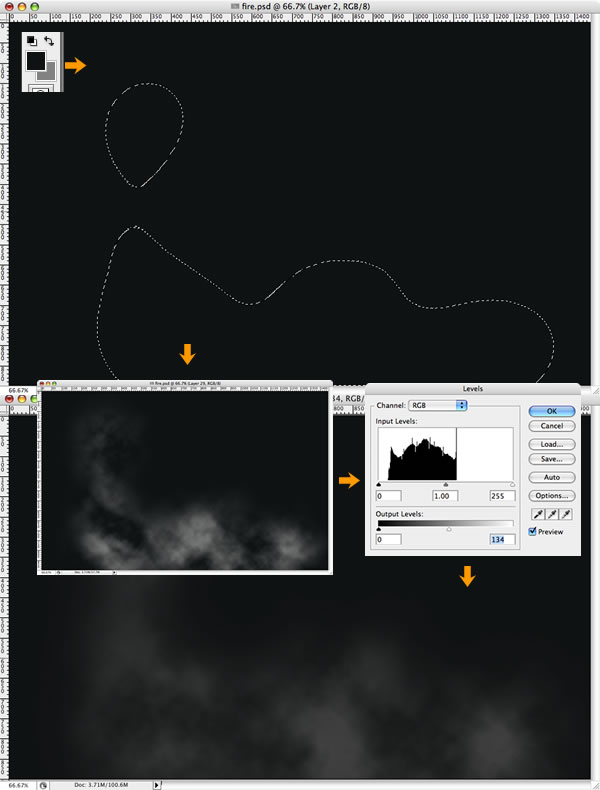 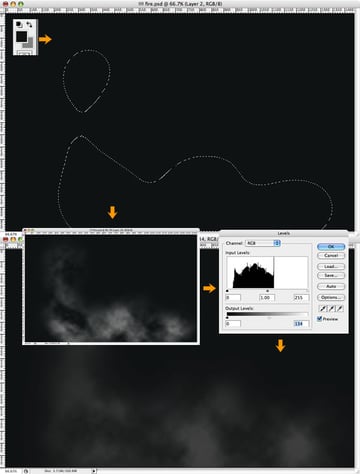 Create another layer and repeat Step 2, but this time just change the background color from 50% gray to a blue or green color. This will create a small cloud, lighter than the big one. 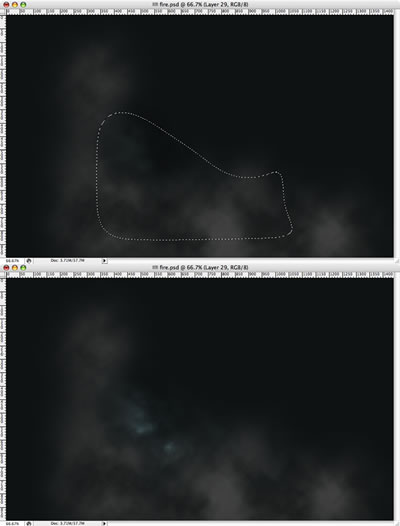 Now we'll switch to Adobe Illustrator to create some text. I used Times New Roman for the font. After that go to Effect > 3D > Extrude and Bevel. Now we will create the 3D text. Rotate the object and change the perspective. You can use the same values as I did (shown below).

Create a new layer and repeat the Step 2, this time using a selection as shown going out the back of the letter T. This will create the trailing smoke. 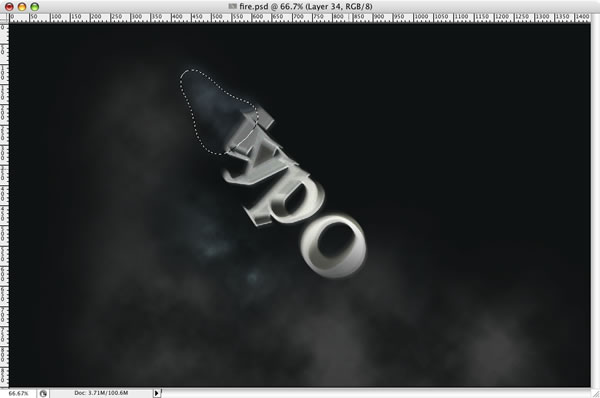 1 - Create a new layer and call it "fire1."
2 - With the Elliptical Marquee Tool (M), create a selection.
3 - Set the background color to light grey and the background to black.
4 - Create clouds as we did in Step 2.
5 - Change the Levels to increase the contrast;
6 - Change the Hue/Saturation with Colorize selected until you get an orange/yellow color. 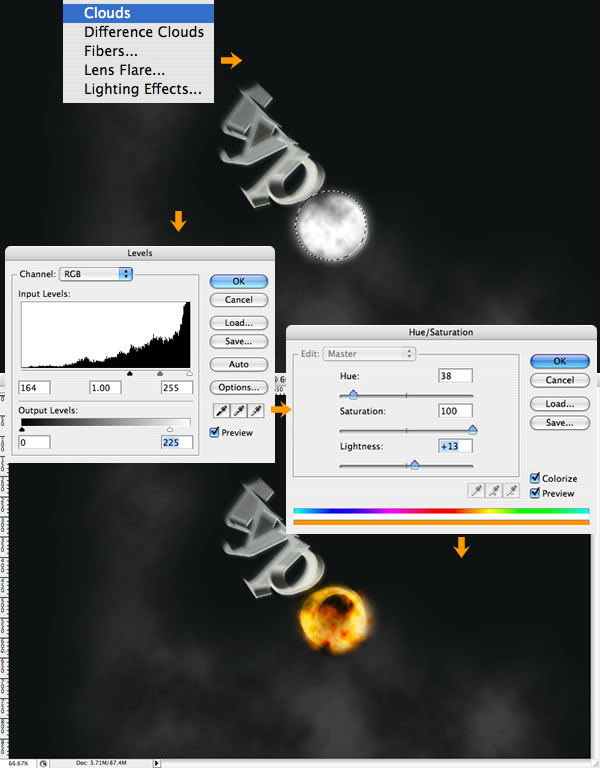 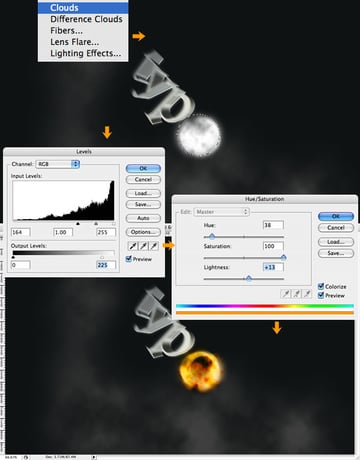 Create a new layer, call it "blazes," and repeat Step 8. After that, duplicate the layer and call it "flames." Create a folder and move the Fire1, Blazes, and Flames layers to this folder and call the whole folder "Fire." It will be on top of the Typo layer.

Select the layer "blazes" and go to Filter > Liquefy. There select the Turbulence Tool (T). Now, on the edges of the fire, start creating some blazes. Use it like you would the smudge tool. 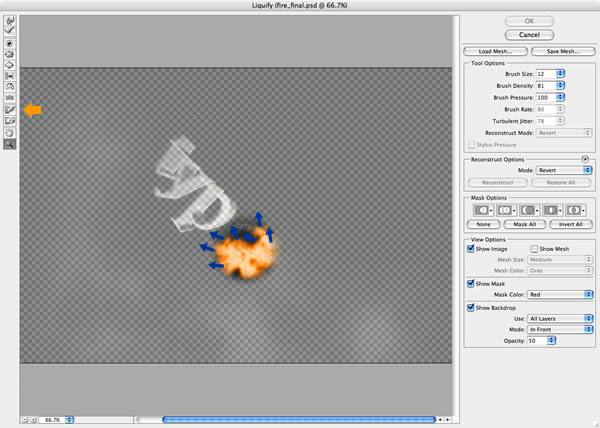 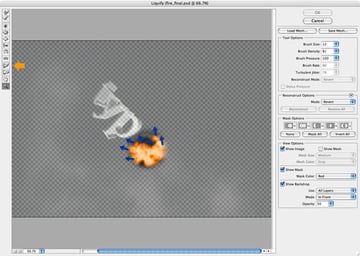 After the Liquefy, go to Edit > Transform > Warp and change the blaze's form to something similar to the image below. After that apply Filter > Sharpen > Sharp. 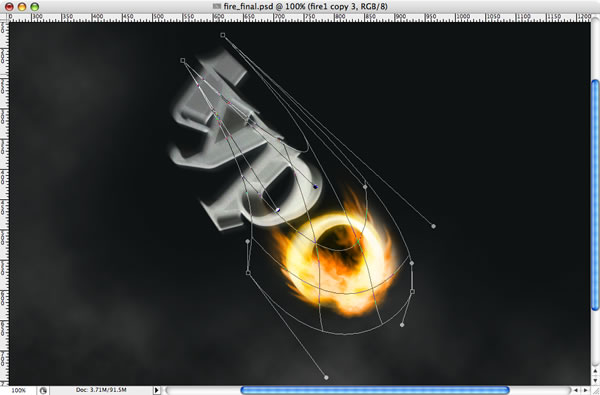 The order and the Blend modes for the fire are:

For the sparks we will use brushes. Create a folder and call it "Sparks." It will be on top of the Fire folder. 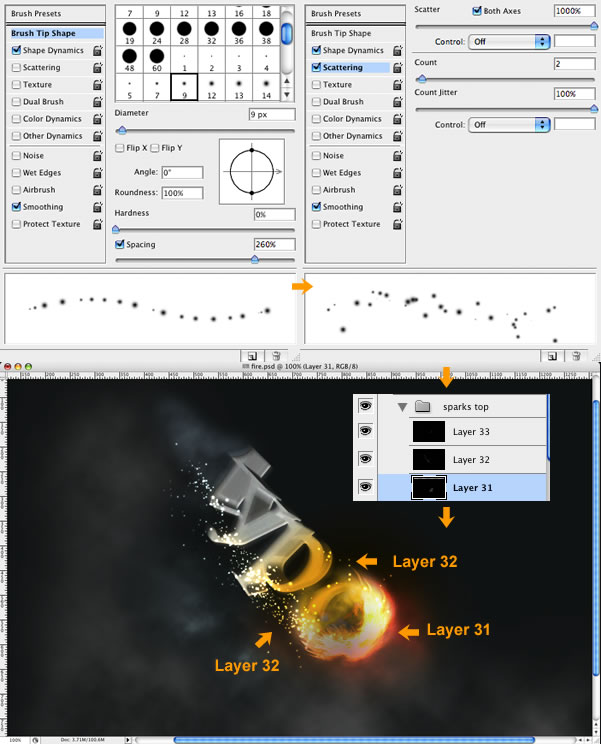 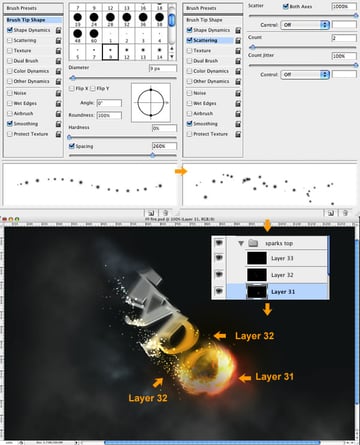 Create a new layer and repeat the Step 14 but now change the Scatter Option to 0%. Start creating some single line sparks like swirls. 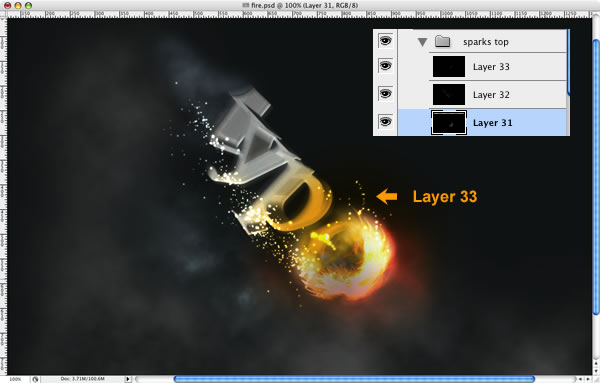 Here I used the Gomedia Spraypaint brushes to create those tiny little sparks, but you can repeat the step 14 changing the Brush size only. Basically, create a new layer, put it behind the others, fill it with black, change the Blend Mode to Color Dodge, see the color to white, and create the sparks. 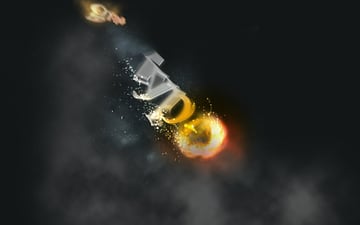 Although it looks complicated, the process is actually very straightforward. I used only three or four filters, brushes, and of course, the Layer Styles. It is a mix of two other tutorials I wrote: Creating Smoke and Magic Lighting Effect in Photoshop. One thing I have to say is that itâ€™s impossible to create exactly the same fire twice, and thatâ€™s because the filter that renders the clouds does so randomly. As always, the idea is to play around with Photoshop to get your own unique results. Hope you enjoyed the tutorial!

Text EffectsAdobe Photoshop
Did you find this post useful?
Yes No
Would you like to provide feedback (optional)?
Cancel Submit
Want a weekly email summary?
Subscribe below and we’ll send you a weekly email summary of all new Design & Illustration tutorials. Never miss out on learning about the next big thing.
Sign up

Fabio Sasso
I am a Brazilian designer living in Porto Alegre (south of Brazil). In 2003, I founded a web design studio called ZEE, with Fabiano Meneghetti, an architect and friend of mine. It's a small studio now, with 4 people working basically with web.
Download Attachment