In this tutorial I'll show you how to create a shiny planet icon using the 3D features of Photoshop CS4 Extended. This will cover basic information about 3D layers and texture maps. Let's get started! 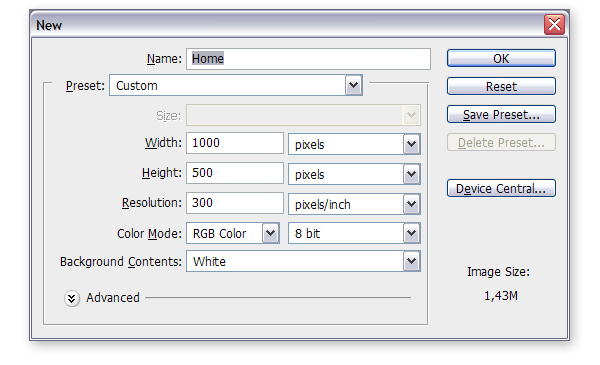 We'll be using some texture for our planet. You can get the diffuse texture from planetpixelemporium.com. Download the "color map" image from the site and place it as a new layer into your document. Rename this layer as "Earth." 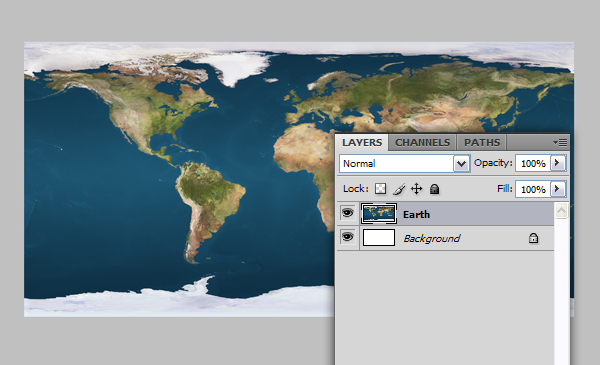 Now go to 3D > New Shape From Layer > Sphere. This will wrap the layer around a sphere and this is going to be the base layer of our planet illustration. 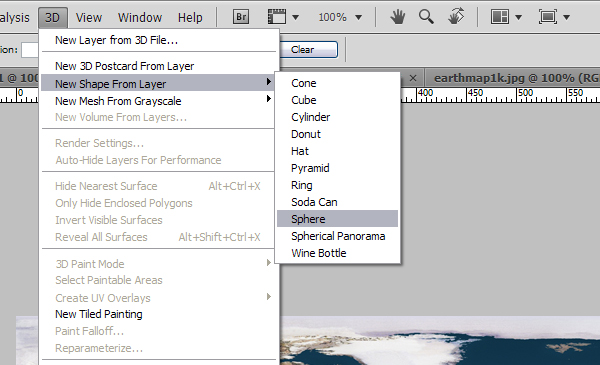 The "Earth" layer is now a 3D layer and a cube icon is displayed in the Layers Palette. You can interact with a 3D model in a 3D layer in Photoshop. You can rotate and move the model or change the position of the camera in 3D space using the 3D tools in the Toolbox. 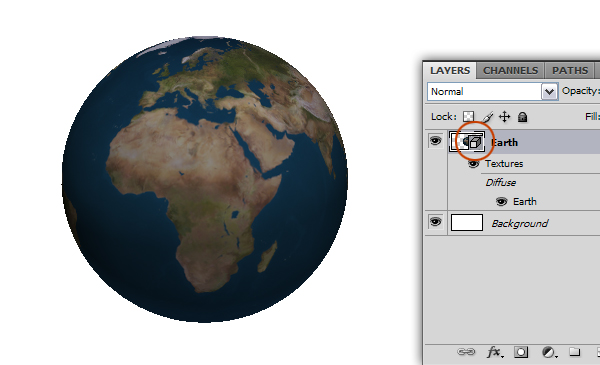 Grab the 3D Rotation Tool, click on the canvas, hold and drag to rotate the sphere and adjust it as you wish. Holding down the Alt or Shift keys will restrict the rotation axis. 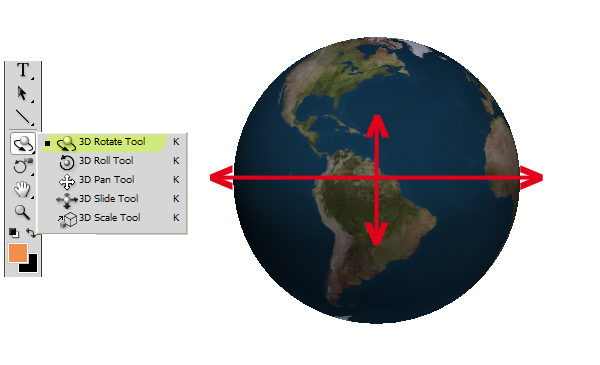 The edges of the sphere look aliased at the moment. First we're going to fix it. Go to the Layers palette and double-click the little cube icon in the "Earth" layer to bring up the 3D Palette. Here you can make several adjustments to the 3D layer. Make sure the "Scene" is selected in the upper list and set Anti-Alias to Best. This will fix the edges.

Now click on the Global Ambient Color box and set the color to R:100, G:100, B:100 and hit OK. This will change the ambient color to a brighter one. 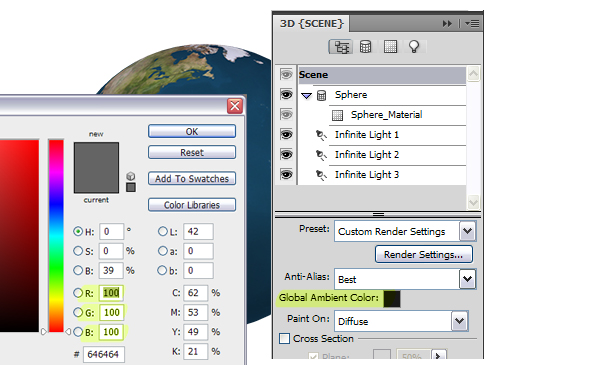 We'll now add a bump map to our planet. First download the "bump map" from planetpixelemporium.com and save the image to your desktop. Now go to the 3D Palette. Go to Sphere_Material and click the Edit the Bump Texture button and chose Load Texture. Select the file you have just downloaded. The "earthbump1k.jpg" file is a grayscale file and the lighter areas in this image will be bumped in our 3D sphere. We also want our planet to be glossy, so set the Glossiness to 100%.

You can change the position of the light in the 3D scene using the Slide the Light and Drag the Light Tools in the 3D Palette. Position the gloss effect on the sphere using these tools. Now select "Infinite Light 3," set it's type to Point as well and set it's Color to R:130, G:130, and B:130. 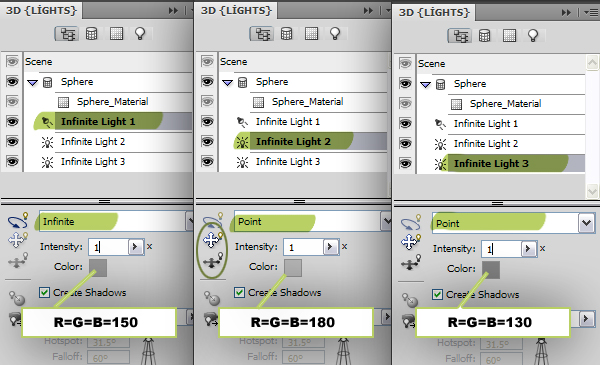 "Infinite Light 3" is placed somewhere under the sphere. Since we're going to put the sphere on a surface and add some drop shadow later on, we just don't want any lights below it. So place the light above the sphere using the Slide and Drag Tools. 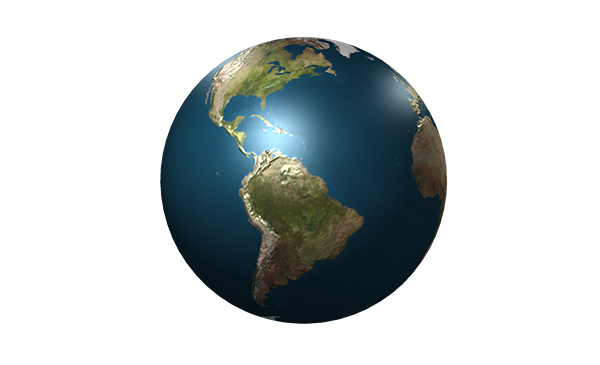 Now we'll make the clouds around the planet. Go to the Layers Palette, duplicate the "Earth" layer and name it "Clouds." Open the 3D properties panel for the "Clouds" layer. Select Sphere_Material in the upper list. Click the Edit the Diffuse Texture button and select Remove Texture. This will unload the existing texture map, and the Diffuse Color will determine how it is going to look. Set the Diffuse Color to white.

Click the Edit the Bump Texture button and choose Remove Texture to unload the bump map. Now we have a white sphere. We'll use another texture map for the clouds. Actually we'll use the white color of the Diffuse for the clouds and this texture map for the opacity. You can download the "clouds transparency" image from planetpixelemporium.com. Click the Edit the Opacity Texture button and choose Load Texture. Locate the "earthcloudmaptrans.jpg" file you have just downloaded.

The opacity texture made some parts of the sphere invisible, but obviously the wrong parts. Click the Edit the Opacity Texture button again and this time choose Open Texture. This will open the texture in a new document window. Go to Image > Adjustments > Invert. Save and close the document. Go back to the "Home.PSD" document, you'll see the opacity map is updated.

The weather seems to be too cloudy, because we can see the clouds that are on the other side through the transparent areas. Making the material one sided will fix that problem. Uncheck Two Sided. To make the clouds a little bit whiter, set Ambient and Specular colors to white. You can get the 3D Rotate Tool from the Toolbox and adjust the orientation of the clouds if you want.

To make the clouds pop out a little more set the Color of the three light to white. 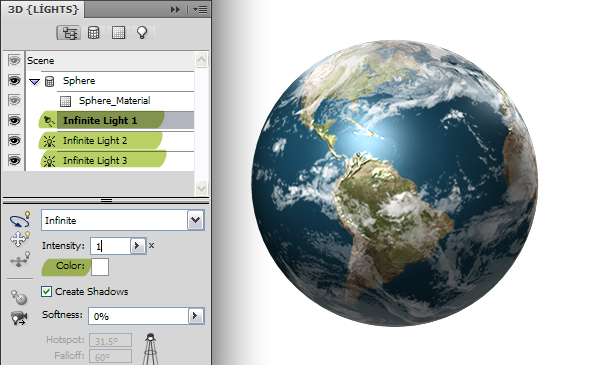 Apply a Drop Shadow Layer Style to the "Clouds" layer and use these settings: Blend Mode set to Multiply, Color set to black, Opacity set at 75%, Distance set to 1px and Size set to 3px.

Now we have our planet done. Since we're going to merge our two 3D layers before we move on, this might be your last chance to change the rotation of the earth and the clouds. Drag one horizontal and one vertical Guide and snap them to the center of the earth. Go to the Layers Palette, select both the "Earth" and "Clouds" layers, merge them by going to Layer > Merge Layers. Name the merged layer "Earth".

Now grab the Elliptical Marque Tool, Hold Alt + Shift and make a circular selection starting from the center of the earth where the two guides intersect. Make a selection as shown below, which is about one pixel smaller than the earth. Go to Select > Inverse and hit Delete to clear. This will clear the drop shadow of the clouds and make the edges smoother. Hit Command + D to deselect. 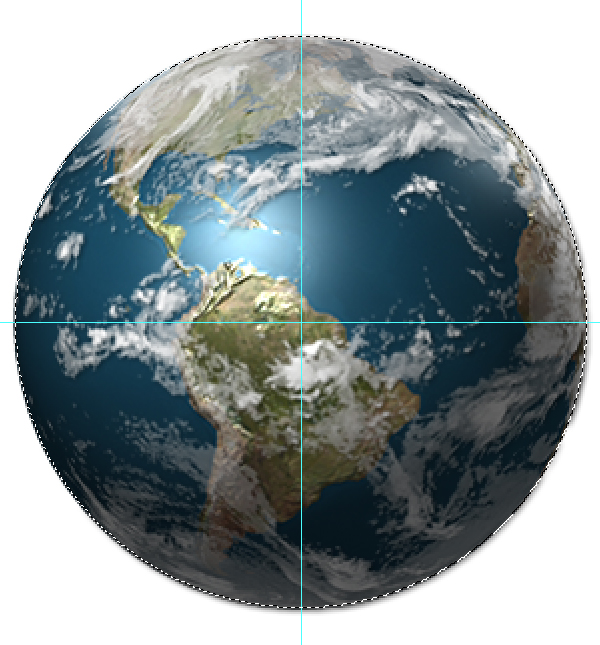 Use the Move Tool to move the earth up to make room for the shadow and the reflection. Apply an Inner Shadow layer style using these settings: Blend Mode set to Multiply, Color set to black, Opacity set at 100%, Angle set to -90 degrees, Distance set to 25px and Size set to 46px. This will make the bottom part darker. 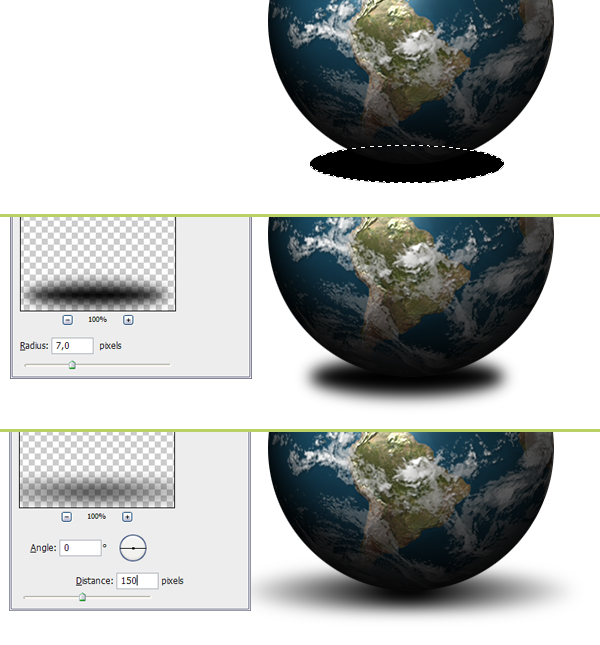 Duplicate the "Shadow" layer. Hit Command + T, set both the Vertical and Horizontal Scale to 60% and apply. This will make a darker shadow where the sphere touches the ground. 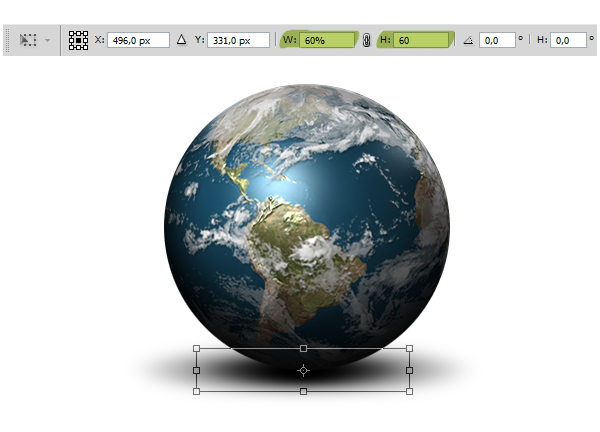 Go to the "Earth" layer in the Layers Palette, duplicate it and name it "Reflection." Delete the Inner Shadow layer style by dragging the Effects to the Trash. Go to Edit > Transform > Flip Vertical to mirror the image. Grab the "Reflection" layer below the "Shadow" layer and position it as shown below.

Go to the Layers Palette and add a Layer Mask to the "Reflection" layer. Get the Gradient Tool, open the Gradient picker and select Black, White. Draw a gradient on the layer mask as shown below. This will make the reflection fade. 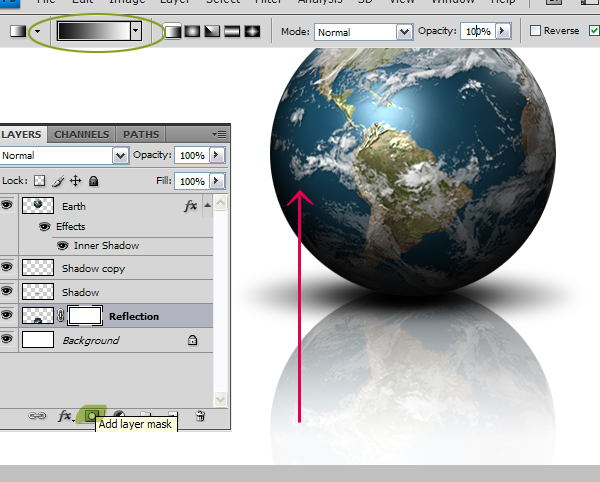 In the Layers Palette click on the "Reflection" Layer Thumbnail to select the layer itself. Go to Filter > Blur > Gaussian Blur and apply with a Radius of 2 pixels. Set the Layer Opacity at 75%. Grab the Gradient Tool and fill the "Background" layer with a light blue to white gradient.

Well that's it! I hope you enjoyed and learn something new about the 3D possibilities of Photoshop!