We all know and love Adobe Photoshop for its pixel-based manipulation. In this tutorial, I decided to look into Photoshop's vector capabilities, combined with gradients, layer modes, and layer styles to produce a great-looking, almost photo-realistic cigarette lighter.

Knowledge of the Pen Tool is required throughout the initial steps. Here you can find very useful templates to practice Pen Tool techniques with, which will get you going very well.
This is my first-ever tutorial attempt, and I've tried to condense the steps as much as possible. This one is for a rainy day (or two)!

1. Get Started in Photoshop

Instead of the background, we will first build all the base vector shapes using the Pen Tool (P). All vector shapes will reside on their own layers.

We need to place a reference image which can be downloaded free from StockXchange here. Doing so will make it easier to follow along with each step I describe.

In Adobe Photoshop, begin with the basic setup, which in my case was destined for lithographic output.

Open Adobe Photoshop, and create a new transparent document with the settings below of 99mm x 200mm at 300dpi. Place your reference image in the middle of your new document, and name the layer. In fact, as you go through these steps, ensure you name all your layers. Above your reference layer create a layer set and name it "base lighter". This layer set will be where you keep your main vector shapes.

2. Create the Base Shapes

Step 1: Use the Pen Tool to Create Vector Shapes

Using the Pen Tool (P), in shape-layer mode, begin to construct the lighter into sections (eight total), using the reference image for rough guidance. It doesn't have to be exact the first time because shape layers are further editable using the Pen Tool and its associated tools. The color-coded image below indicates layer ordering, which is important. The main plastic case is at the bottom. The very top has a text layer for a bit of personalization. I chose my screen name "apepp" using the font Helvetica Neue Condensed Bold.

For now, color each Photoshop vector shape layer with shades of black to white to easily distinguish between them. To do this, double-click the layer thumbnail in the layers palette to access the color picker. Once all your eight shapes are created, remember to keep things tidy by pressing the Shift key and selecting each vector layer, then drag them into your layer set ("base lighter") created in Step 1.

Layer Set Tip: Creating a layer set can also be achieved by pressing the Shift key and clicking the layer set icon. All your previously selected layers will automatically fall into a new layer set and kept in their original stacking order. The other way is to use "Command/Apple + G".

For the flint "Wheel" layer, use the Polygon Tool (Shift + U ) in shape-layer mode, and set the number of sides to approximately 35. Click and drag to an appropriate size. While the mouse button is still held down, hold the space bar and move it into position. Then release the space bar and further adjust the size if required. When you release the mouse, the layer will be created. This layer needs to be somewhere underneath the metal case. 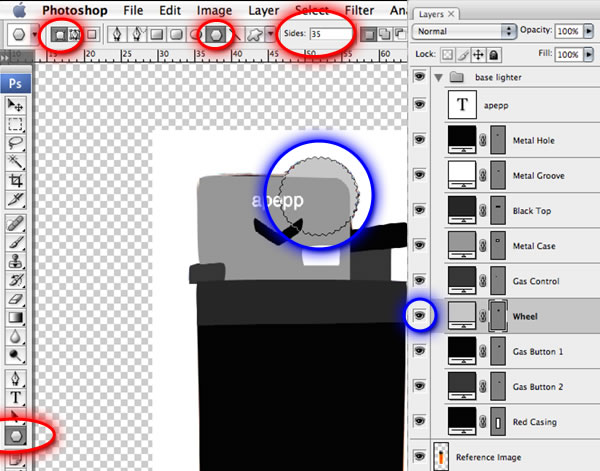 Step 3: Use the Pen Tool to Create the Inner Sections

Once you have created the above, hide the layer set "base lighter". Then begin (in much the same way as above) to create the inner sections (five total) as indicated in the image below with the Pen Tool. Again, position these elements into a layer set by Shift-selecting each layer and pressing the layer set icon in combination with the Shift key. Don't forget to name this layer set "Inners". 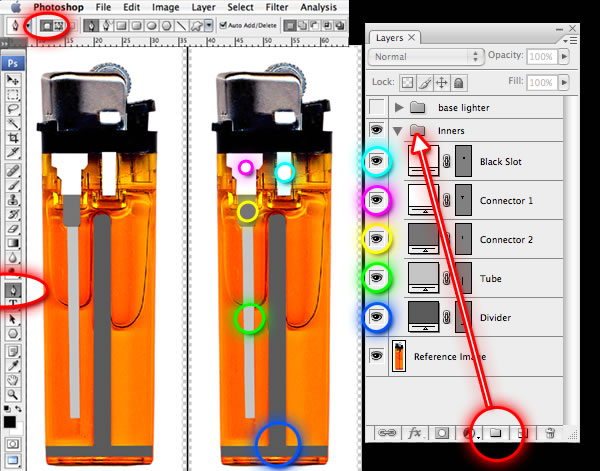 We need to add a "Label" layer below the "Divider" layer. This label is stuck on the other side of the main plastic casing. Use the Rounded Rectangle Tool (Shift + U) in shape-layer mode, enter a Radius of 10px, drag out the shape, and position roughly in the middle. Press Command/Apple + T to transform its rotation slightly to the right by dragging just outside of the top-right control handle. 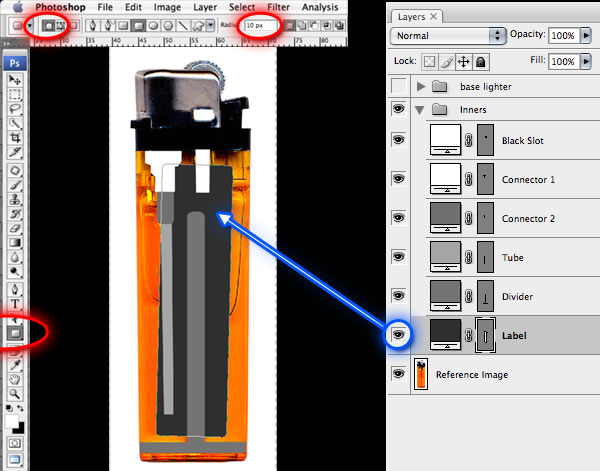 2. Use Photoshop's Effects and Layer Modes to Add Detail

Step 1: Create the Lighter Fluid With a Layer Mode

The last part for the inner section is the "Fluid" layer. Create this using the Pen Tool (P) in shape-layer mode (a touch short of the plastic case edges) and move it above the "Tube" layer. Color the "Fluid" vector layer with something like #282828 and change the layer mode to "Soft Light". Changing layer blending modes can also be done by pressing "Shift" and using the + or â€“ keys. 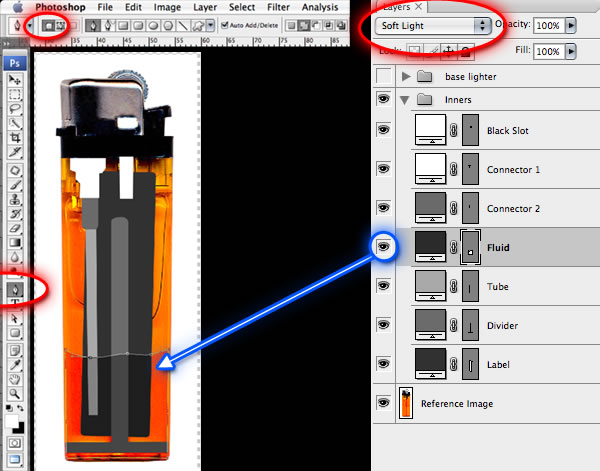 Now for the background effect. First hide both the "base lighter" and "Inners" layer sets. Create another layer set called "BGround" or something similar. Add a new layer to this layer set, then choose Filter > Render > Clouds. Press "Command/Apple + T", change the anchor point to the top row via the proxy image in the toolbar. Then type into the height field "140mm", and press the return key to commit this adjustment. Change the layer mode to "Soft Light" and the Opacity to 35%. If you quickly type 35 on your keypad, the opacity will change. Name this layer "Smoke". 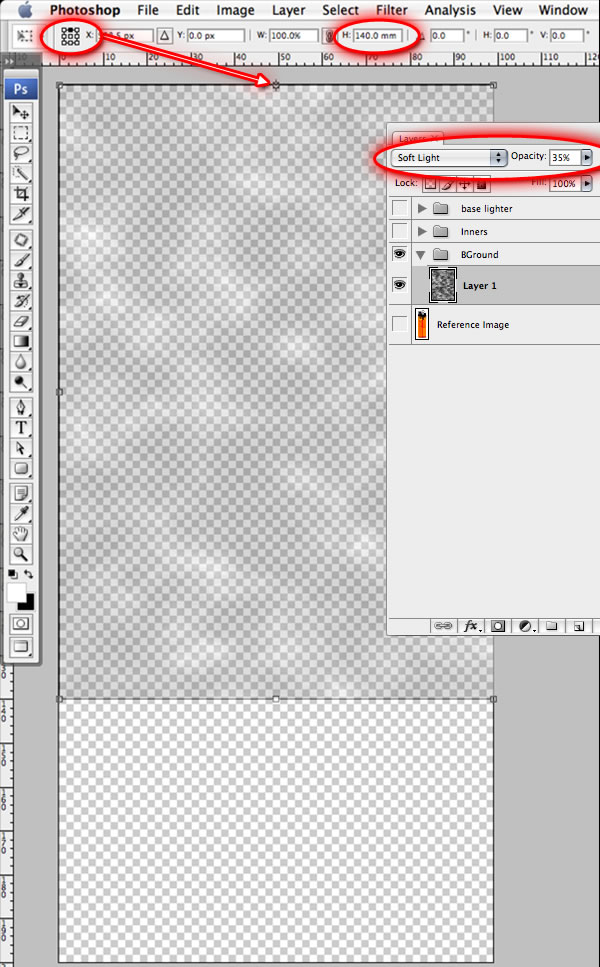 Still on the "Smoke" layer, double-click the space right-hand side of the layer thumbnail to bring up the layer effects dialog to apply an "Outer Glow". This is to simulate a table edge with light being diffused off the surface. Change the default yellow to white by clicking the yellow square under the noise setting. The other settings are as follows:

Step 4: Use the Gradient Tool

Under the "Smoke" layer, create a new layer called "Light". Select the Gradient Tool, set a new gradient by clicking the gradient preview in the top toolbar, set the left bottom slider to black #000000 and the right-bottom slider to a blue/gray #78828c, and the mid-point slider to 80%.

Drag in the direction of the green arrow identified on the image below, from the top-left corner to the bottom-right corner of the "Smoke" layer created earlier. 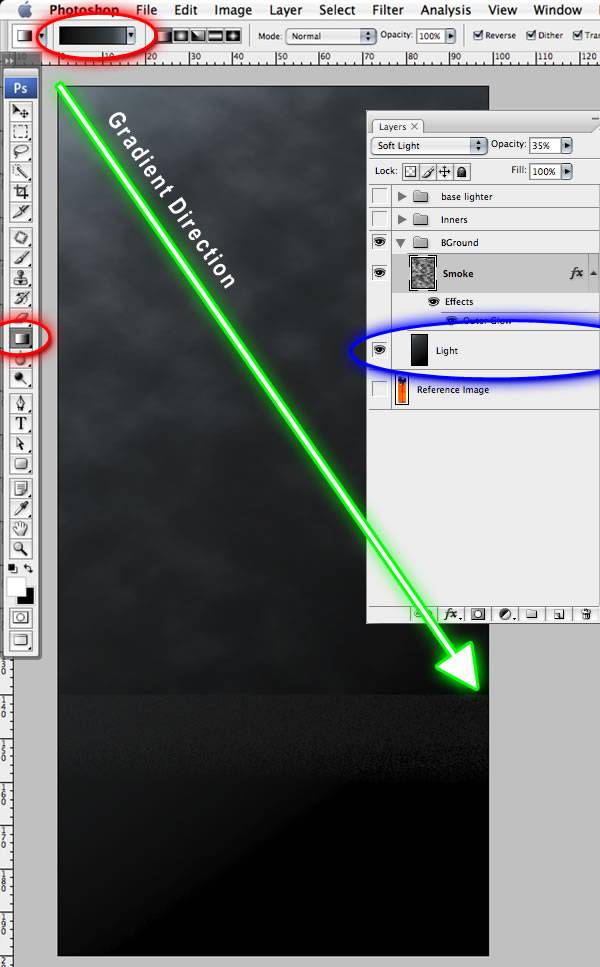 Step 4: Colour in Your Cigarette Lighter

Now that we have all the essential elements built, we can begin to give depth to the base lighter using layer styles. Turn on the layer set "base lighter" and from top to bottom we'll add the layer effects required. Before that, we will color each vector object as follows by double-clicking the vector layer thumbnail as highlighted below. Do also check the "Red Casing" blending mode is set to "Hard Light", and make sure all other layer modes are "Normal".

Color each one as follows in the number field at the very bottom of the color picker dialog: 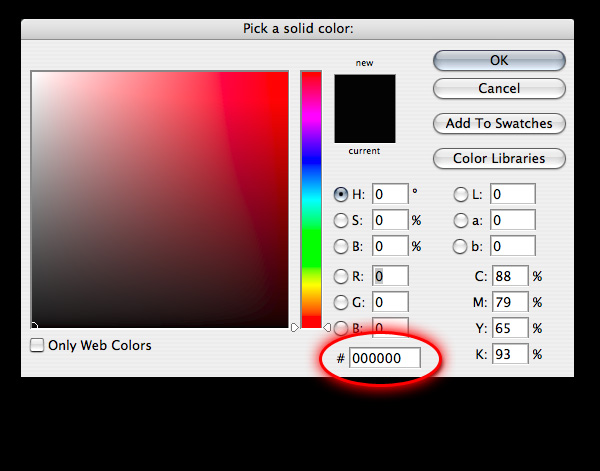 To add layer effects, double-click the area just to the right of the layers name and apply the settings as follows:

Note: also set this layer's Fill Opacity to 0% in the layers palette. You can also do this in the layer style dialog by clicking on "Blending Options", top of the list in the left-hand panel.

To edit the actual gradient, click on the gradient preview as shown on image below to reveal the Gradient Editor. 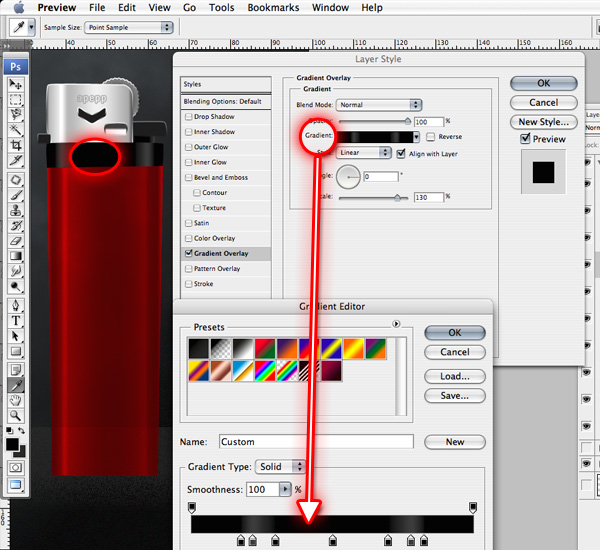 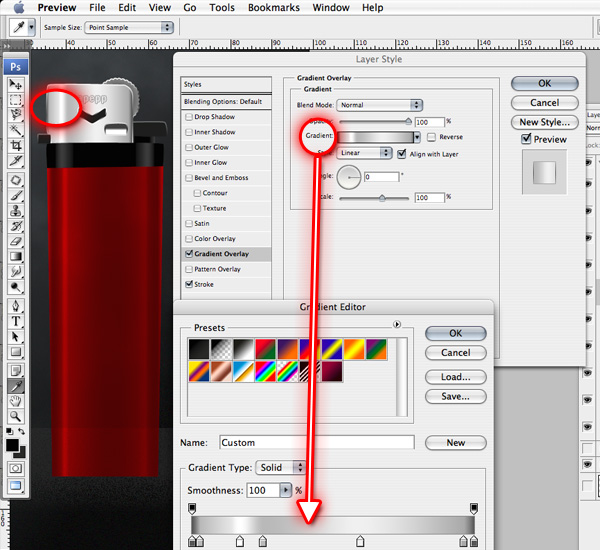 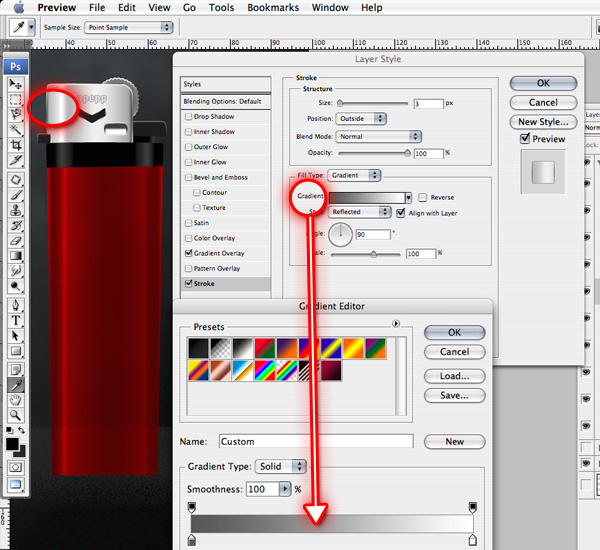 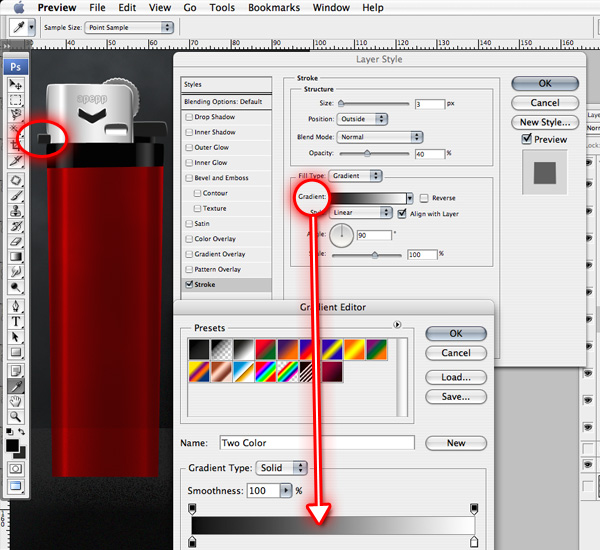 Ok, you got this far, so well-done.

We're in the home stretch now, and to launch ourselves down that way further, reveal the layer set "Inners". Check that the layer "Fluid" has the blend mode set to "Soft Light".

Now, just like the beginning of Step 10, we will color each vector shape as follows:

As for the layer styles, only three items need them, and they are: 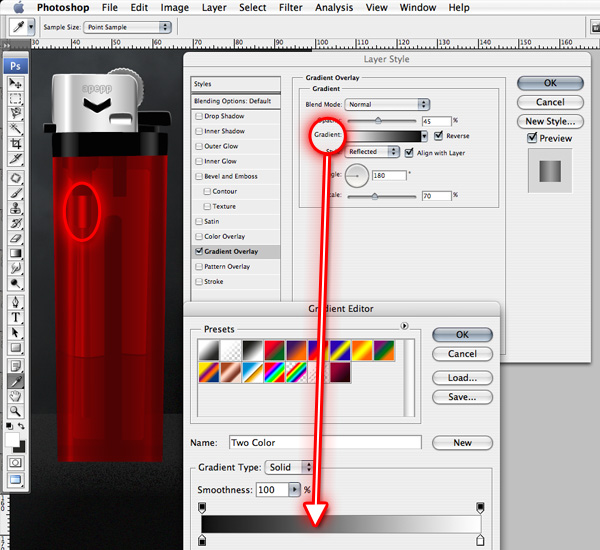 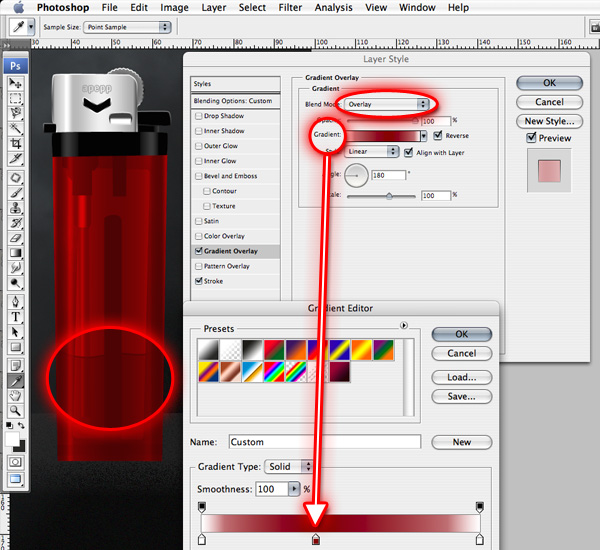 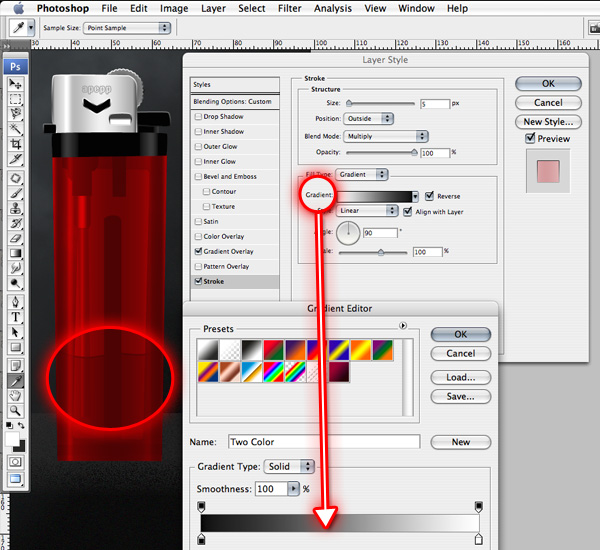 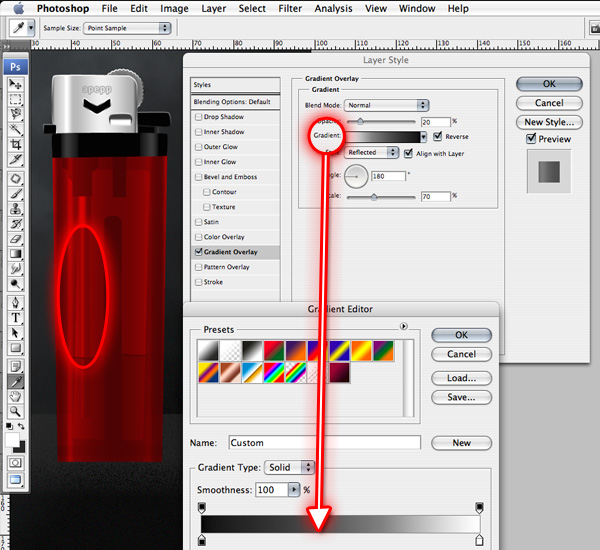 It's really coming together nicely now, and hopefully the same for you too. But what's a lighter without a flame?

Step 1: Use the Ellipse Tool to Draw Your Flame Shape

The flame is simply made of two vector shape layers. Grab the Ellipse tool (in shape layer mode), and draw the largest "Flame Outer" first. Make sure it is pure white too. The flame also needs to be below the "Base Lighter" layer set so it sits under the metal casing.

Step 2: Add the Inside Layer of the Flame

Duplicate the "Flame Outer" layer (press Command/Apple + J) and scale it down by pressing Command/Apple + T and dragging the control handles around until you are happy. Press the Enter key to commit this change and name this layer "Flame Inner". Set this layer's Opacity to 50%.

In the image below, you will see both elements. I have shaded the "Flame Inner" in grey so you can see the two separate shapes clearer, but they both need to be pure white for when we color them.

Step 3: Use Layer Styles to Create the Flame Effect

Double-click the "Flame Inner" layer to bring up the layer styles dialog and set them as follows: 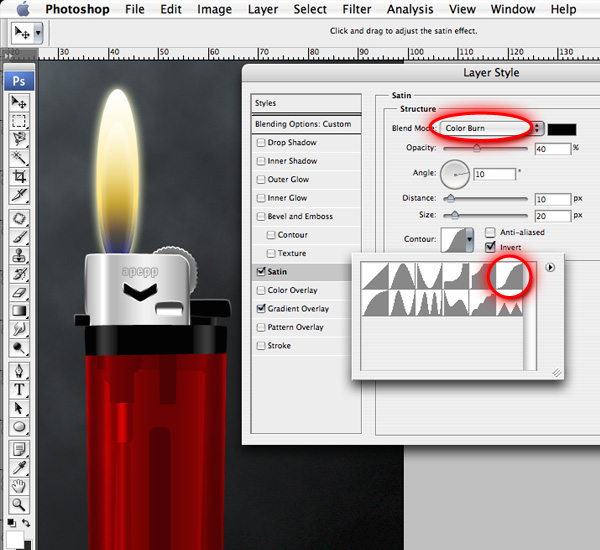 Step 4: Give Your Realistic Fire Some Finishing Touches

Double-click the "Flame Outer" layer to bring up the layer styles dialog and set them as follows: 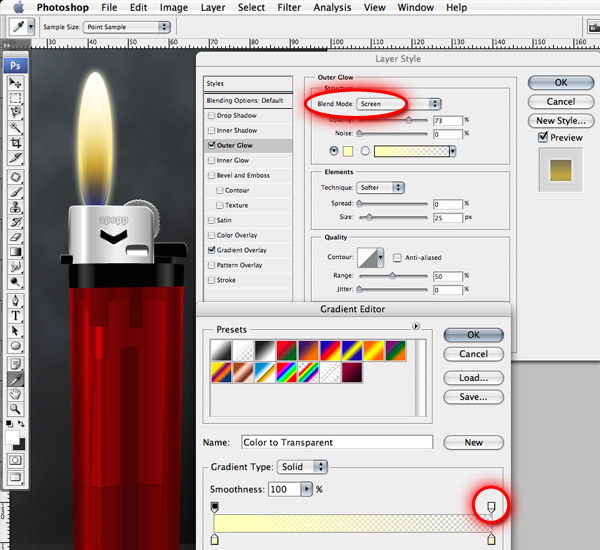 Step 1: Use Photoshop Layer Masks to Create a Reflection

OK, it is pretty much there now, and for the finishing touch, we need that faithful reflection on the table. We'll use an easy technique that many use as often as drop shadows.

Select both the layer sets "base lighter" and "Inners" by Command/apple-click. Drag these sets to the new layer icon at the foot of the layers palette. This will create copies of the sets fully intact, preserving all layer stacking orders within the sets. The copies will also remain selected, so as they are, press Command/Apple + G and those sets will become grouped.

Finally press Command/Apple + T and right-click within the transformed area to select the central anchor point in the proxy preview.

Then select "Flip Vertical" as in image below and press the Enter to commit the change. 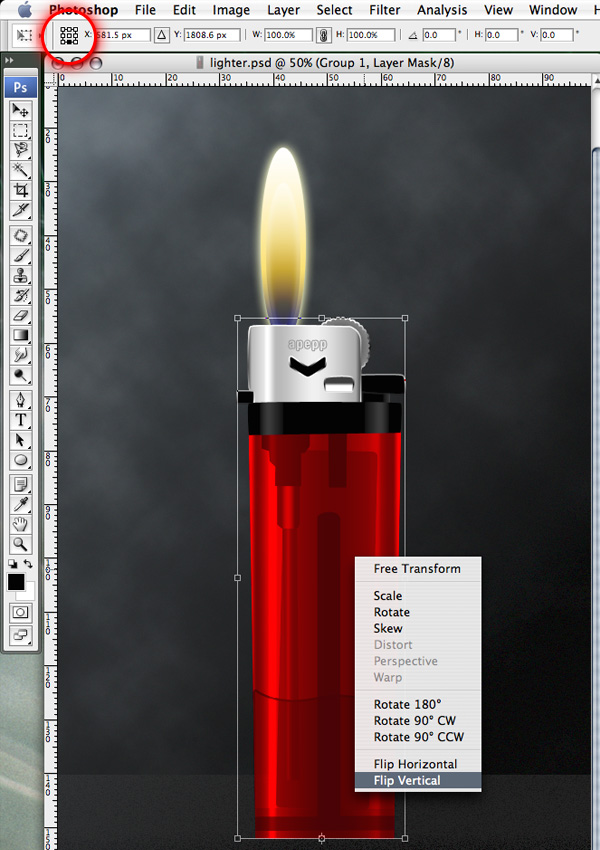 Step 2: Lower the Opacity of Your Reflection

Now select the layer mask created in Step 17. With the Gradient Tool, set a white-to-black gradient and drag from the bottom to where the arrow finishes in the image below. Set the layer set opacity to 80%. 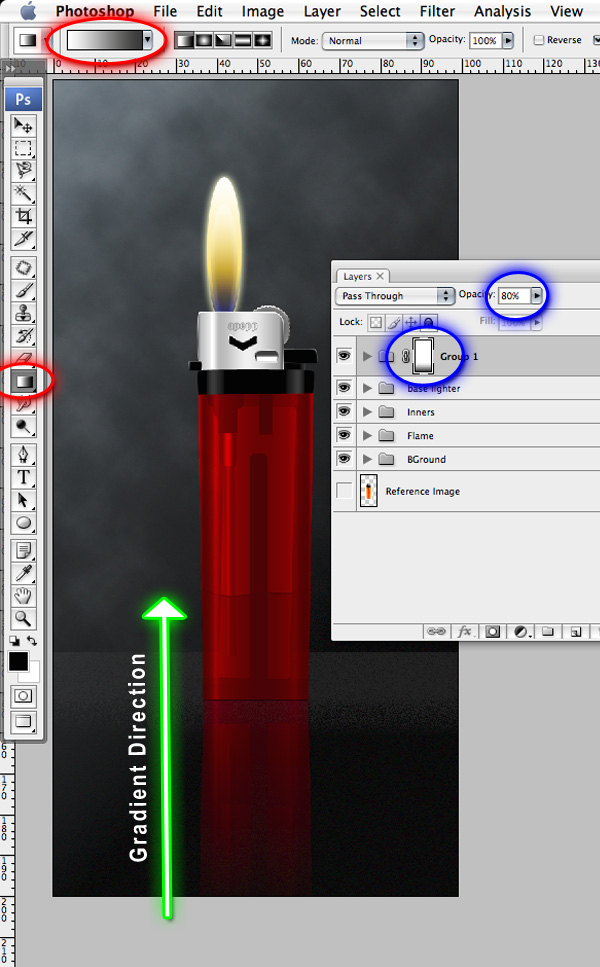 Here is the final composition. If you wanted to, you could go on to create an animated flame effect in Photoshop CS3 by way of the Animation window.

Andrew Peppin
Born March 4th 1978. Have been a photoshop user since version 5, predominantly work in 2D graphics within a pre-press environment for a CTP company here in the UK. Been a part of reprographics for 10+ years (with love and hate). Came into the trade just as CTP was becoming the next big thing. Used to play in a band as a drummer and attended Exeter College with the Muse lead singer Matthew Bellamy who were, as it turns out, far better than we were ever going to be.
Weekly email summary
Subscribe below and we’ll send you a weekly email summary of all new Design & Illustration tutorials. Never miss out on learning about the next big thing.
Advertisement
Download Attachment
Translations