Create a Picture Gallery in Illustrator

This work is a common project created together with Iaroslav Lazunov and Alexander Egupov. We have used 3D rendering, Blends, Opacity masks, making this three-dimensional stage with vanishing points. Learn every step in how to create this picture gallery work.

First of all, take the Rectangle Tool (M) and draw the path shown, and fill it with a Radial gradient. It will be the basis for the gallery.

Take the Ellipse Tool (L) and create an ellipse, which will represent a stage, and fill it with the Radial gradient (as shown below). 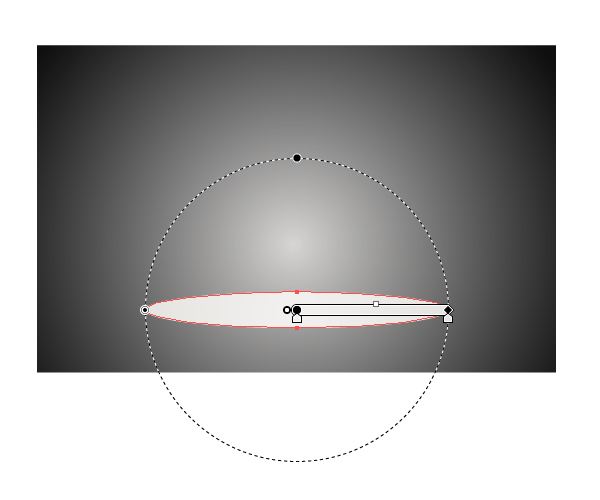 Copy this ellipse and paste it in back (Command + C then Command + B). Move the copy slightly down.

Grab the Direct Selection Tool (A), select the top anchor point of the ellipse copy with it, and press the Delete button on your keyboard.

Now take the Pen Tool (P) and continue drawing the rest of the arc (as shown in the figure below).

Fill the received path with the Linear gradient shown.

Now expand this gradient to the gradient mesh by going to Object > Expand, and Object > Ungroup after that. 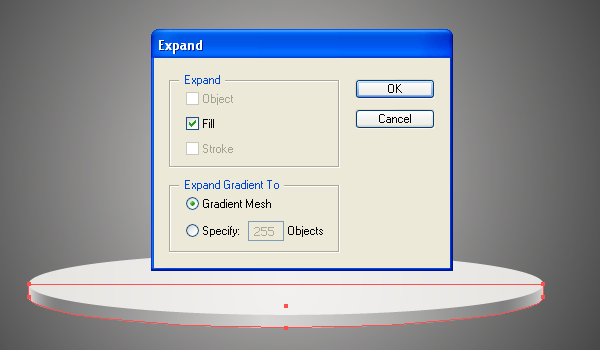 You will receive the following mesh.

Take the Mesh Tool (U), add the nodes, color them in different shades of gray, and move them in order to achieve the following result.

Grab the Ellipse Tool (L) and draw an elliptical path. Now fill it with gray.

Change the Opacity of this ellipse to 0.

Now draw a smaller ellipse filled with dark gray and place it over the biggest one in the Layers palette. Its location in the workspace is shown below.

Place these ellipses under the stage.

Go to Object > Blend > Blend Options, then set the Spacing to Specified Steps, and the quantity of steps to 60.

While both elliptical paths are selected, go to Object > Blend > Make (Command + Option + B). And you will receive a shadow from the stage.

Use this chain of actions in order to create your own blends. Draw a light spot under the stage now. Do it by yourself without assistance.

Select the elliptical plate of the stage, go to Object > Transform > Scale, and decrease the value of the Uniform scaling. Now click there the Copy button, fill the received ellipse with light gray, and achieve the following result.

Repeat these manipulations. And after that you need to receive both ellipses, where the smallest ellipse is located over the biggest one.

While both elliptical paths are selected, go to Object > Compound Path > Make (Command + 8). And you will get a gray ring on the plate.

Illustrate the following rectangular path and fill it with light gray. It will represent the central picture of the gallery.

Let this picture be luminescent! How to achieve this? First, go to Effect > Document Raster Effect Settings and set there the High resolution (300ppi).

Then go to Effect > Blur > Gaussian Blur and set there the value of the blurring radius (shown below). 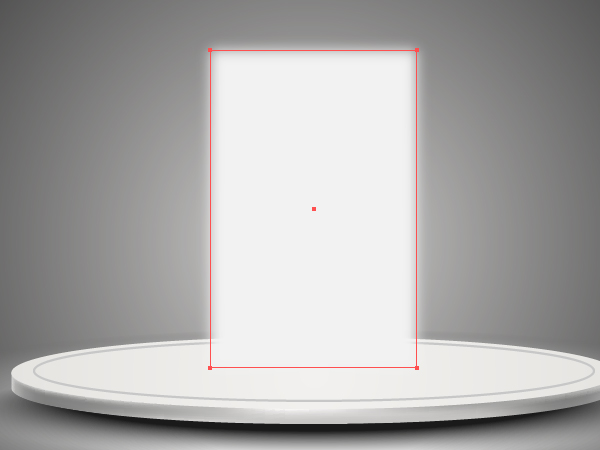 Copy this rectangle and paste in front (Command + C then Command + F). Go to the Appearance palette and delete the "Gaussian Blur" item. 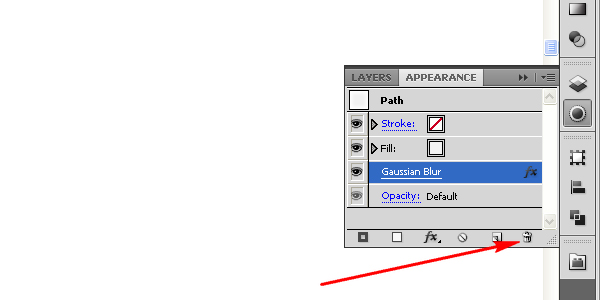 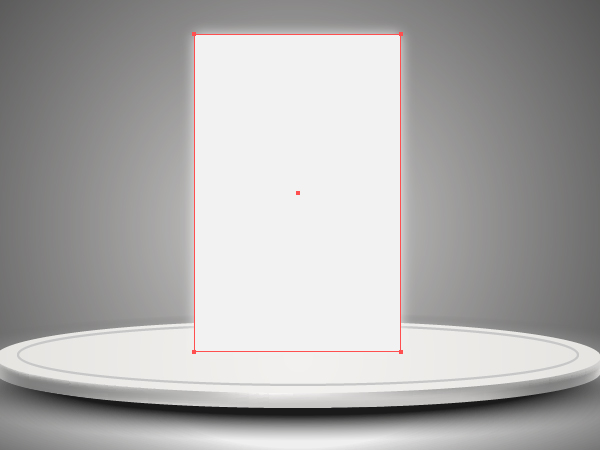 Illustrate now the dark gray path over the light one.

Illustrate a shadow under the picture using the blend.

Now move the copy downward in order to locate it under the picture itself. Change the saturation of these paths fillings. You should have the following result.

Sketch the next rectangle over them, and fill it with the Vertical gradient that goes from black to gray in color as shown.

Select both: this path and the group under it, and go to the Transparency palette. Select there the Make Opacity Mask command in the fly-out menu.

You should have the following results, which represent a reflection. 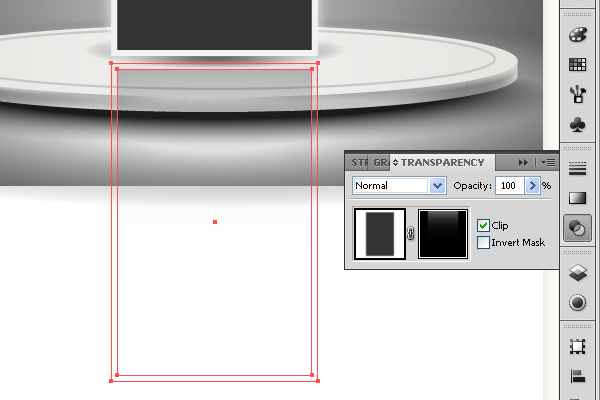 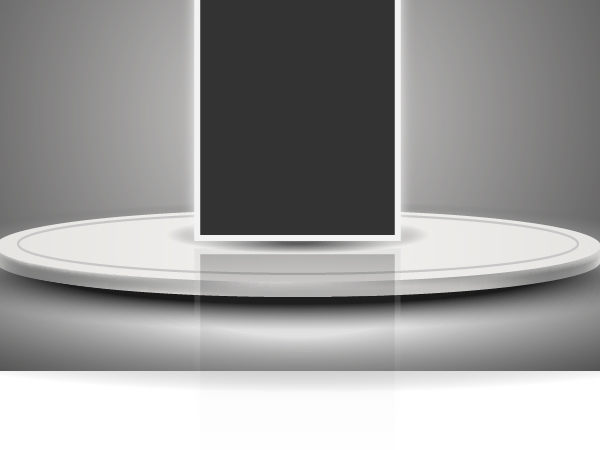 But our reflection cannot lie beyond the stage. What must we do in order to fix it? Select the elliptical plate of the stage, copy it and paste in front (Command + C then Command + F),...

...then place it over the reflection group, and apply the Object > Clipping Mask > Make (Command + 7).

Illustrate now the circle at the right bottom corner of the central picture, and fill it with white, for example. We will create a spotlight now.

Now go to Effect > 3D > Extrude & Bevel, and set there the items as you can see them in the diagram below.

You need to achieve the following result.

Go to the Appearance palette and click there the reference to 3D Extrude & Bevel in order to edit effect.

Specify a rendering style of the surface to No Shading. You need to do this in order to decrease the quantity of paths after the expanding. 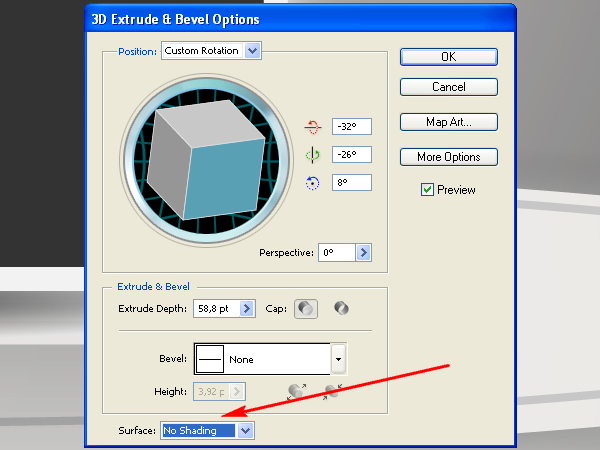 Unite all lateral parts by going to the Pathfinder palette. After that you must have two paths only.

Fill the lateral surface of the spotlight with an angled gradient.

Fill the rear surface of the spotlight with the Radial gradient as shown.

Create now the back path filled with a vertical gradient.

Draw an elliptical plate filled with a vertical gradient under the spotlight. It will represent a support detail. 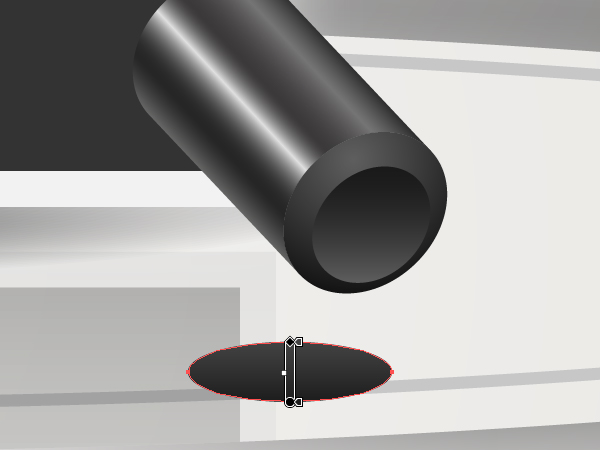 Draw the lateral path of this plate filled with black as you did it in Step 2.

Illustrate the leg of the spotlight. Pay attention to the elliptical form in the lower part of it. 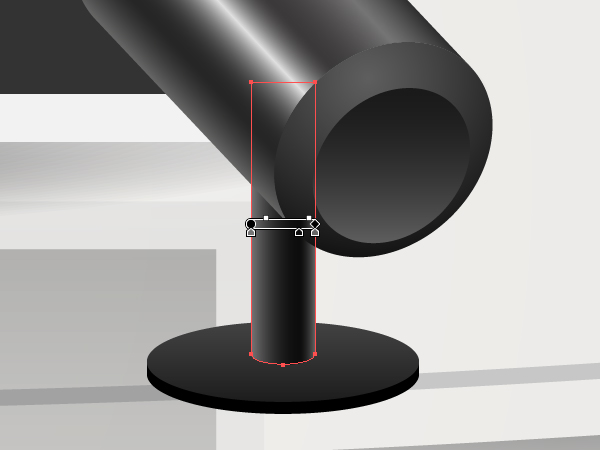 Illustrate a shadow under the spotlight using the Blend.

In order to create a beam of light, first of all you need to draw the two following paths filled with white. (The circular path is placed over the non-circular one).

Then change the non-circular filling to an angled gradient that goes from white to white in color and from 100% to 0 in Opacity. See the diagram below for reference. 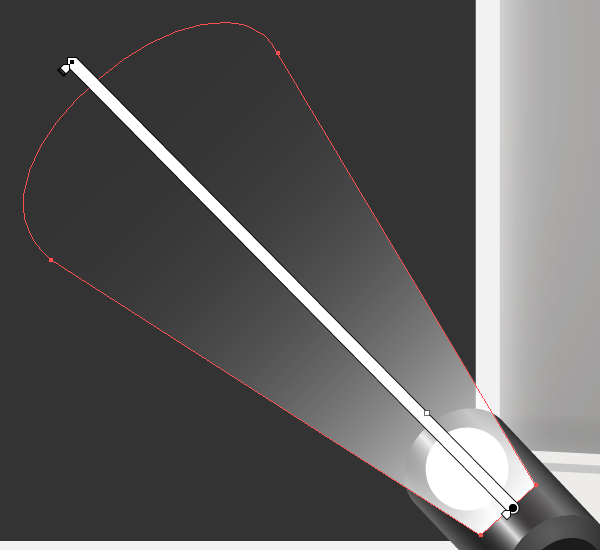 Change the Opacity of the non-circular path to 0...

...and create a blend from these two paths.

Place the ray under the spotlight. Decrease then the Opacity of the ray if you want. 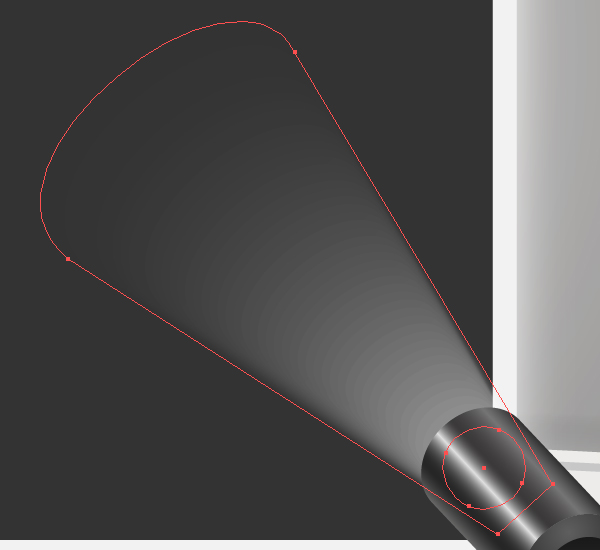 Illustrate as many spotlights as you want. 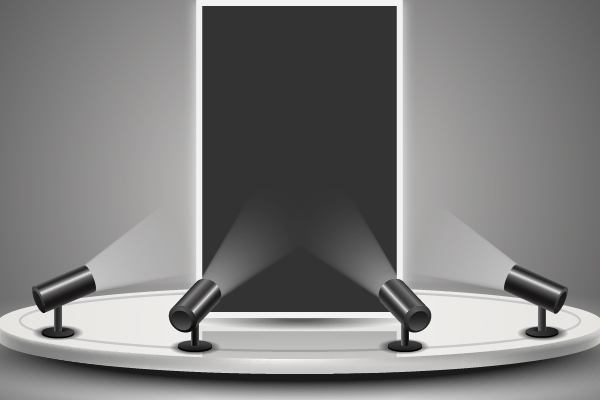 Now we begin to draw a perspective using the vanishing points. We will use three vanishing points in our drawing (shown with the red circles in the diagram below). You are free to set them at your own choosing, but give heed to the symmetrical placing of them. In other words, the segment "AB" must be equal to the segment "BC".

Let's sketch the left border of the leftmost picture in our gallery. This border is a vertical segment obviously.

Let the horizontal guideline go to the intersection with the upper point of this path.

Take the Rotate Tool (R), click on the Guide in the upper point...

...and rotate the guideline to the intersection with the remote vanishing point. 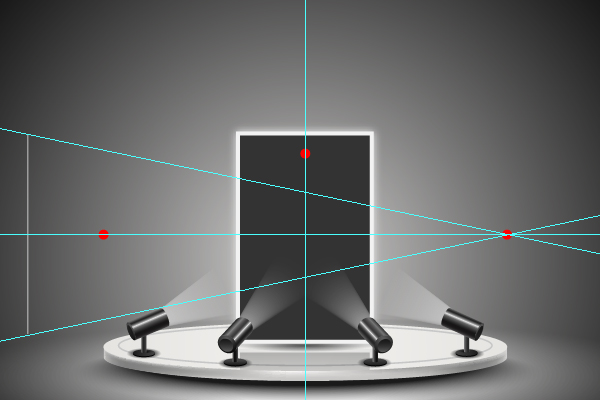 Select this form, copy it, and paste in back (Command + C then Command + B). Now make this picture luminescent. Go to Effect > Blur > Gaussian Blur and set there the value of the blurring radius. 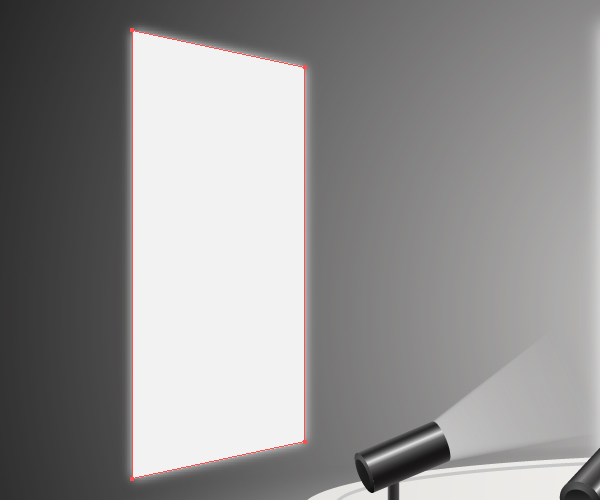 Sketch the dark gray path in the inner part of the picture.

Illustrate another picture the same way along the guidelines.

And illustrate the right pictures the same way. They must converge with each other in the left vanishing point.

The lamps on the ceiling are illustrated the same way as the pictures. They converge with each other in the upper vanishing point. Follow the helpful diagrams below.

When the left side of the ceiling lamp is complete, select all of them, and go to Object > Transform > Reflect. Set the following items in the dialog box and click the Copy button. 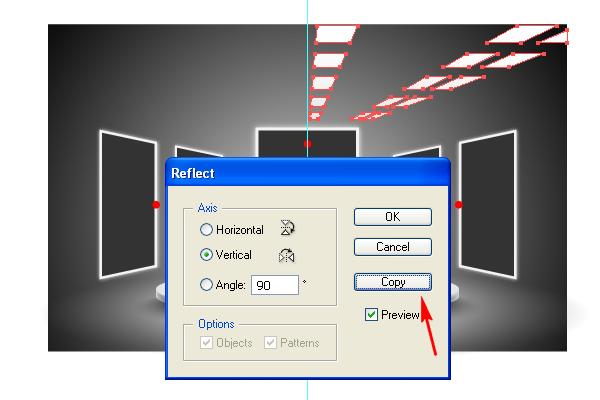 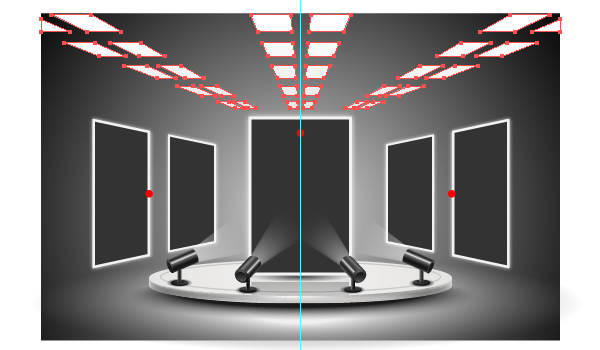 Picture now the glare on the central picture using the vertical gradient that goes from white to white in color and from 0 to 50% in Opacity. 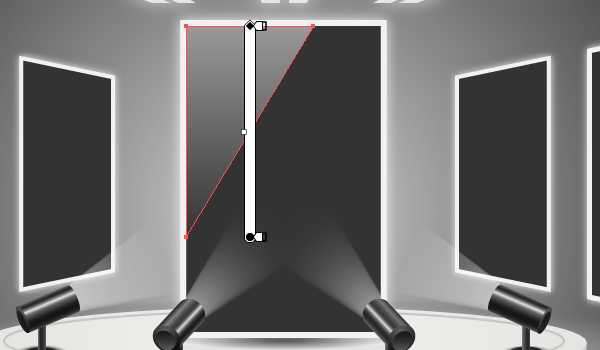 Repeat these manipulations for the other pictures.

Now draw a rectangular path in the lower part of the artwork and fill it with the Radial gradient shown.

Draw another rectangular path in the upper part of the artwork and fill it with the vertical gradient with Opacity. See the image below for reference.

Lay emphasis on the borders of the artwork by creating the black rectangle in the top left corner of your image. Decrease the Opacity of it as you like.

Do the same with the top right corner.

And sketch the black path over them. 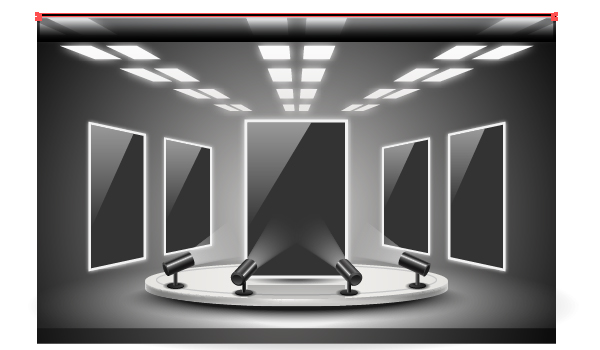 Grab the Type Tool (T), choose any font, and type the shown words. Then go to Type > Create Outlines (Command + Shift + O), and fill the paths with white.

Place the white vertical strokes between the words as shown.

Place the shown text in the lower part of your artwork. 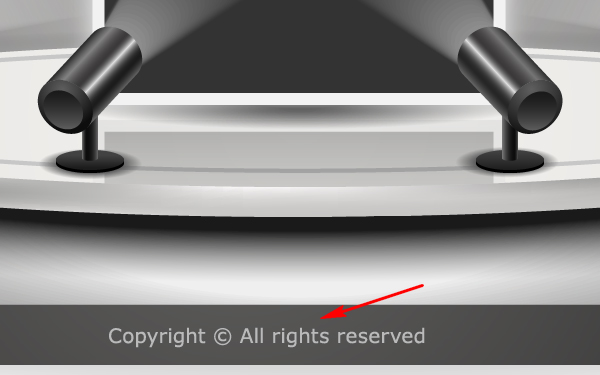 Sketch the next gray path in order to represent an arrow.

Place the arrows on the left and right sides of your artwork. 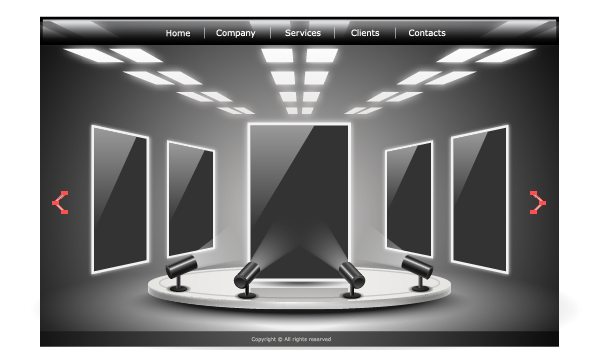 To customize this you may insert your own images in order to create a unique picture gallery.