In today's tutorial we will learn how to create a vector mosaic from a raster image using a Scriptographer plug-in, which allow us to widen the standard functions of Adobe Illustrator. To create a vector portrait we will use the scripts developed by Russian designer Vladimir Seregin.

The Scriptographer plug-in can be downloaded on the Scriptographer.org website. You will find detailed instructions on how to install scripts on your computer here. Download all the scripts necessary for our tutorial on Vladimir Seregin's blog, using the following link https://github.com/peko/scriptographer_scripts/downloads. Extract the scripts from the archive and install them into the Adobe Illustrator folder Plug-ins > Scriptographer > Scripts folder.

In this tutorial I used the photo of Ukrainian photographer Alexander Osadchuk.

You can surely use any other image in your work, for example, your own photo. Note, the scripts work properly with RGB color mode images with the resolution of 72 ppi. In order to give your image the necessary options, select it and go to the Object > Rasterize... and set the values which are shown on the picture below.

Creation of the Cubic Mosaic

To turn on the scripts go to the Window > Scriptographer > Show Main Palette. Choose the folder which contains Vladinir Seregin's scripts. In my case, it is the folder Examples > Tool. 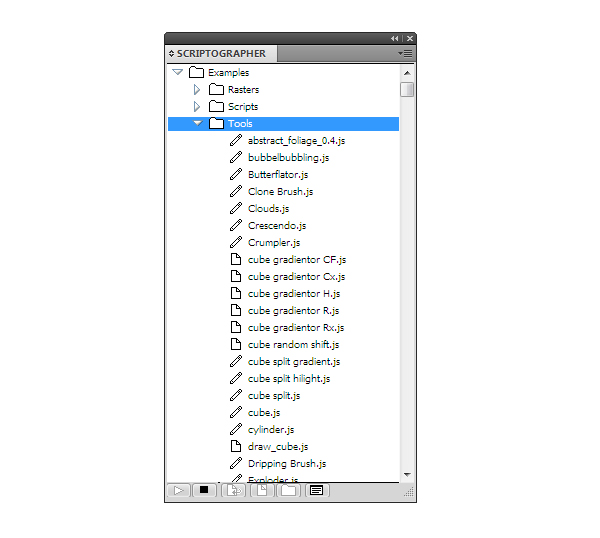 We will use "cube split.js" script to work with our raster image. To run and stop the script use the control button in the bottom of the Scriptographer panel.

I draw your attention to the error message below. The script requires the raster image to be selected to work properly.

The cube should cover all the images. Use the Selection Tool (V) to change the cube's size, while holding Shift + Option buttons. Now click on the cube's borders; this leads to the creation of new cubes of a smaller size. 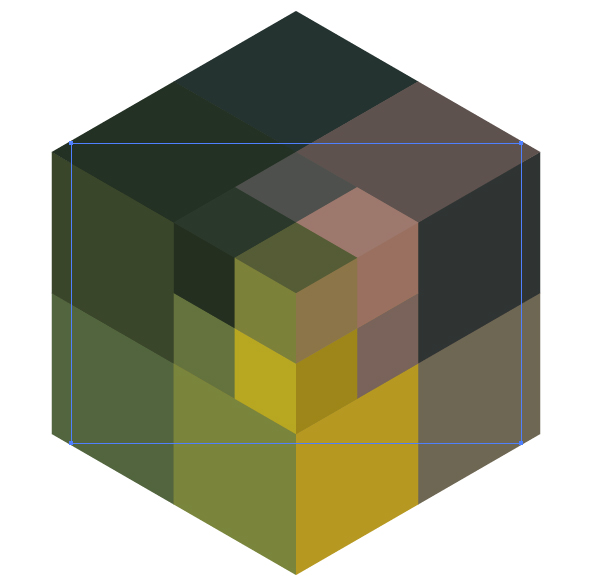 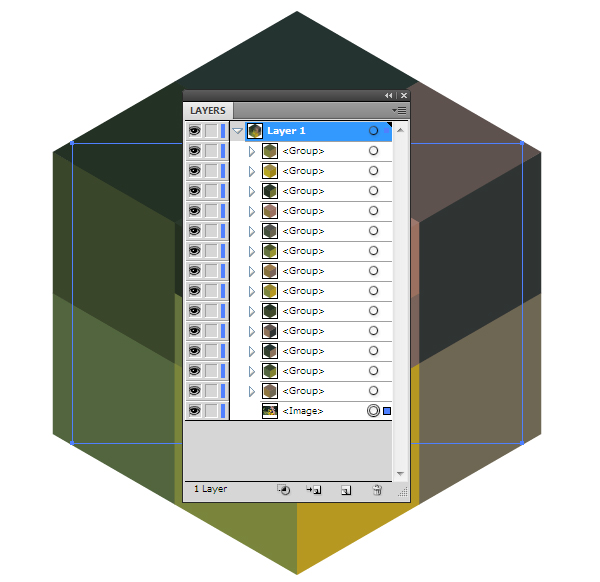 For further convenience of our work with the cubic mosaic we need to create a new layer above the first, copy the raster image and paste it to the front (Command + C, Command + F), then drag the copy into a new layer.

Reduce the Opacity in the Transparency Panel for this layer.

We don't need the upper layer for awhile, so turn off its visibility and lock it. 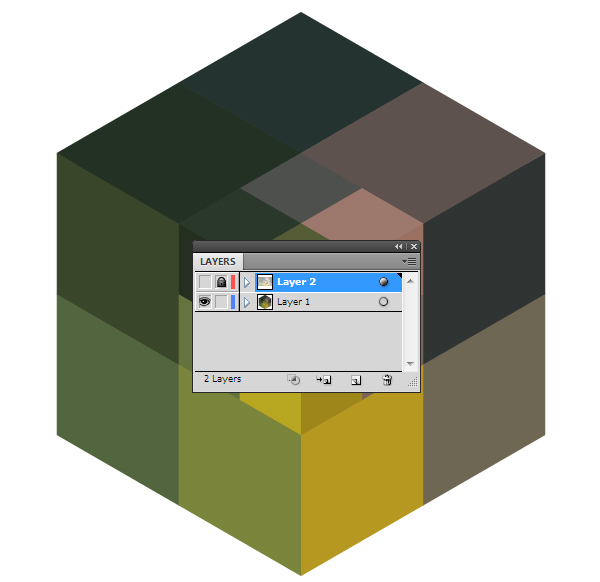 There is a whole family of scripts for the cubic mosaic. Though I am not going to use them for the creation of this portrait, but you may find them useful for the realization of your artistic vision. I will show you some of the examples of their usage and the effects which you can get on the received cubes. 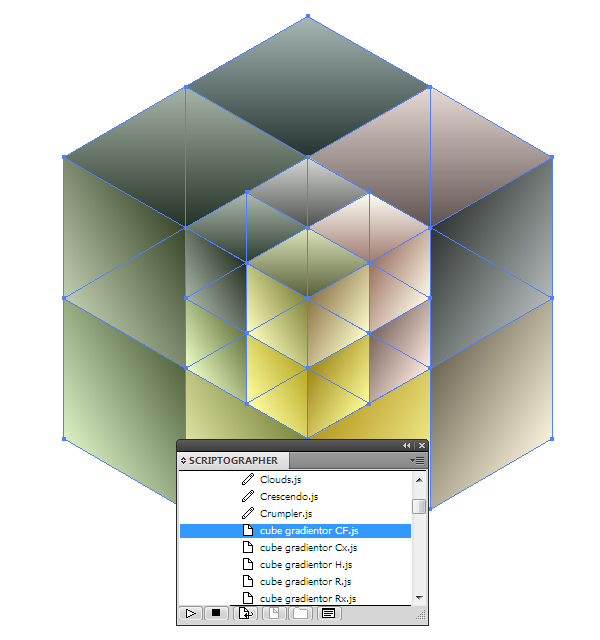 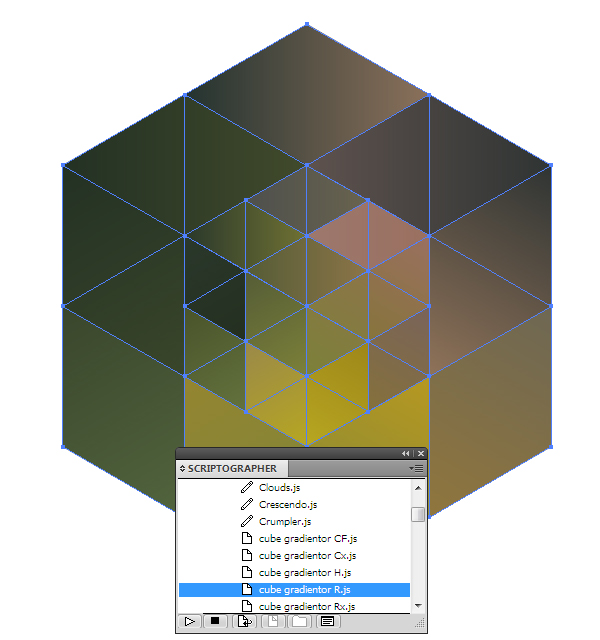 Break the received cubes into smaller ones by using the "cube split.js" script. Then repeat the decomposition while moving closer to the center. 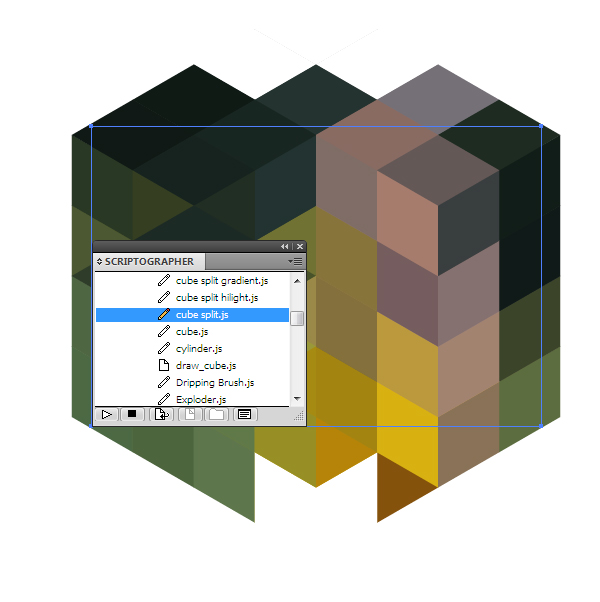 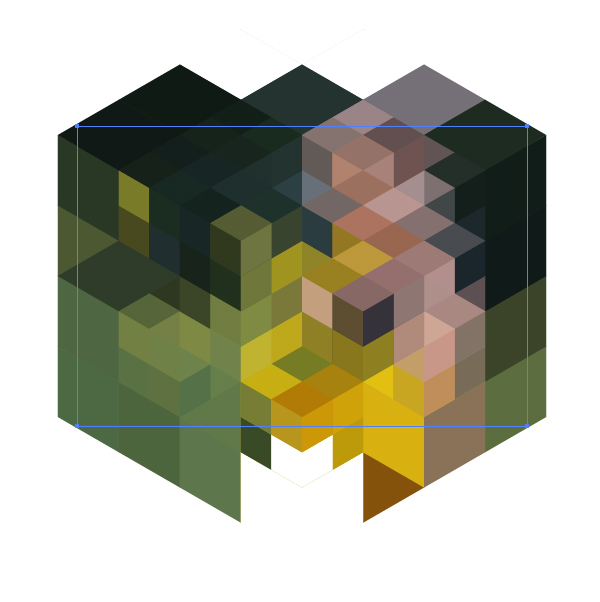 Define the basic elements of our composition. I will concentrate on the girl's face, on the hand holding a flower and on one of the flowers located at the bottom of the image.

In these areas the mosaic will be more of smaller blocks. Now the upper layer with the semi-transparent copy of the portrait will be useful. When we turn on its vision we can exactly define where the face, the hand and the flower is situated.

While working, turn on and off the vision of the upper layer, change the zoom and split the blocks into smaller ones in the places where you decide to make an accent. Try to get a uniform partition in the places of maximum detail. 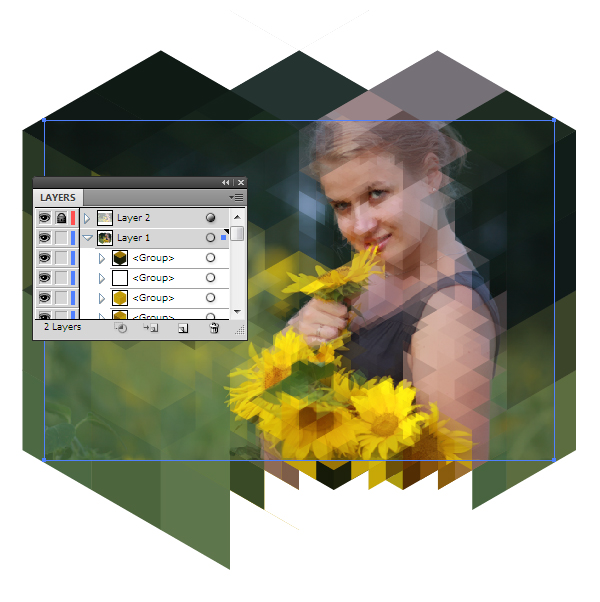 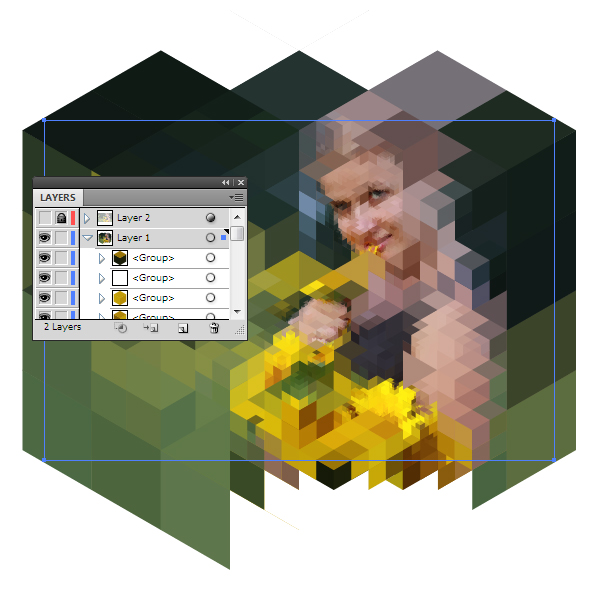 We will use a couple of tools and scripts to give the final artistic look to our composition. I will tell you what techniques I used, but you can decide where to use them. I want to draw your attention where we can work with a separate cube, as well as with the objects that the cube consists of.

It is convenient to use the Group Selection Tool (one click selects the cube's border, Double-click selects the entire group to which the object belongs) to select the elements of the mosaic.

We can move the selected cubes, delete or recolor them. 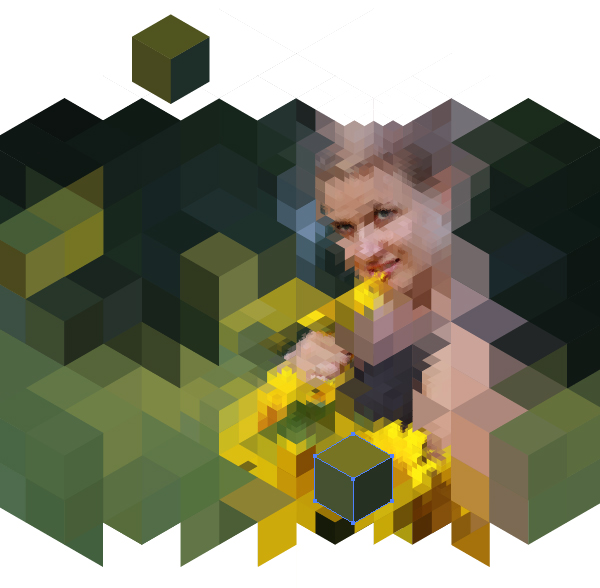 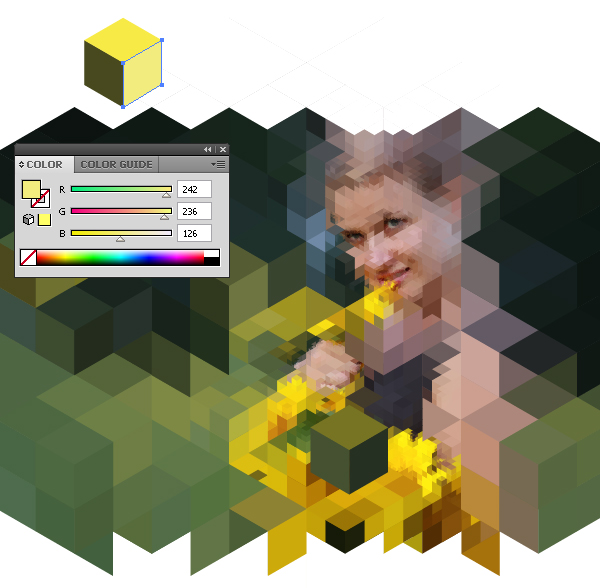 The package, which was installed at your computer at the beginning of the tutorial, has some more interesting scripts. The "Cube random shift.js" script brings the selected cubes into a creative mess. Select some cubes with the Lass Tool (Q) and use the Cube random shift.js 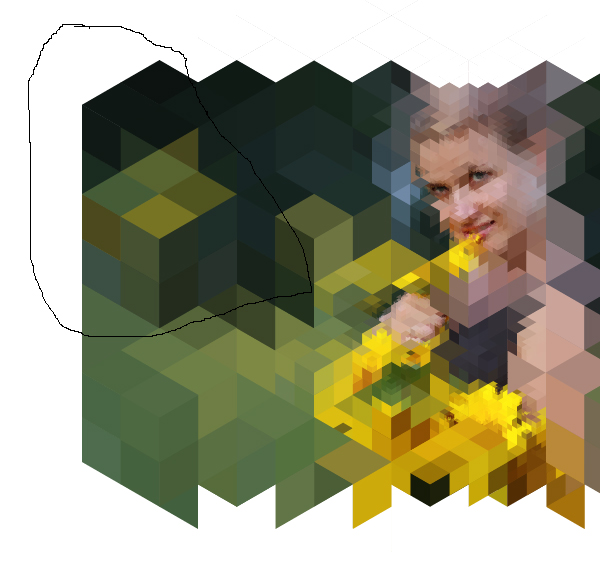 When you run the script again the location of the objects and cubes will change again. So you can choose the best option for you.

The "Exploder.js script" divides the selected cube into smaller shapes, randomly assigning them to new coordinates. 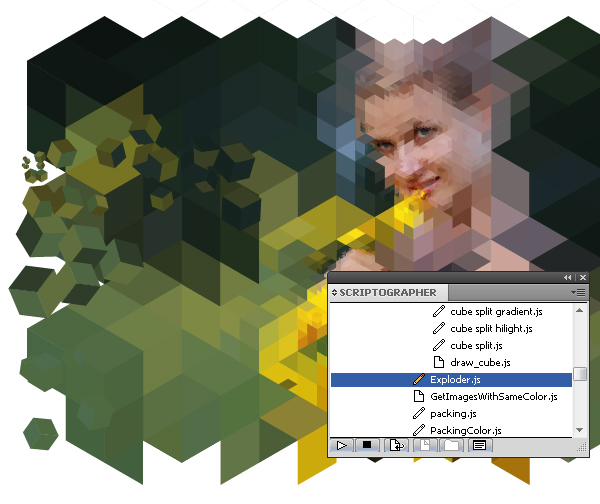 The "Splitter.js" script divides the selected cube into four parts.

The "SplitterHex.js" divides the selected cube into seven parts. 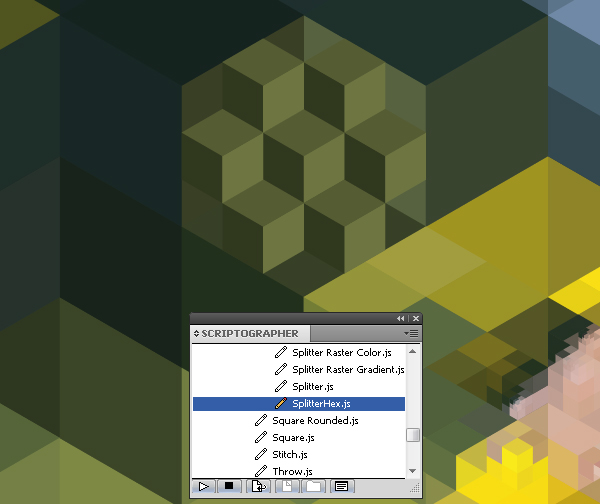 Using the techniques described above I created a mosaic portrait such as this. 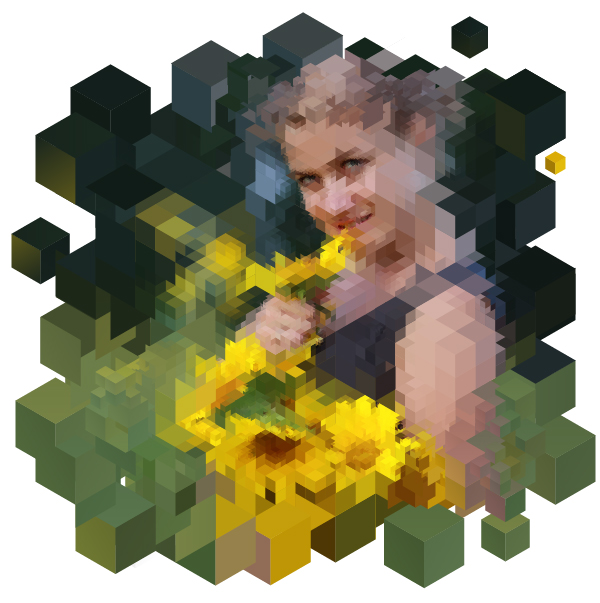 The Creation of the Cubic Mosaic of Arbitrary Objects

You can get an interesting result using the "Butterflator.js" script. As in the case with the mosaic with cubes, prepare the raster image for work using the technique describes in steps 1-5.

Create a circle with the help of the Ellipse Tool (L). The circle should fully cover the raster image.

Using the "Butterflator.js" script divide the circle into smaller parts. 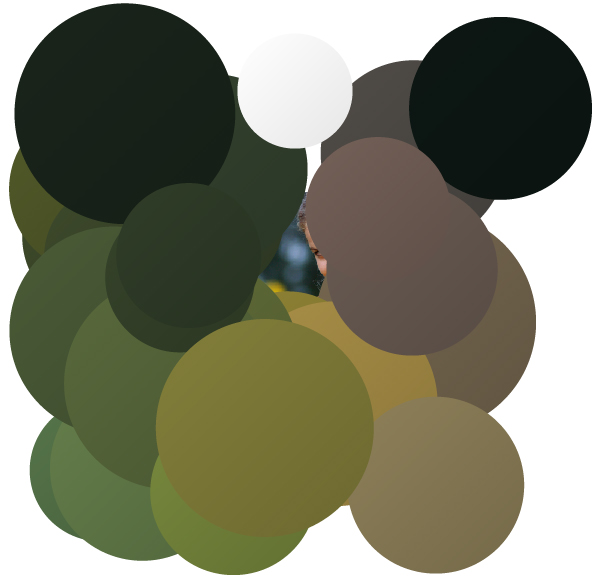 Note that in the center of our composition there is a place where no new circles were made. We can also see the area of the raster image. In these areas create new circles with the help of the Ellipse Tool (L) and apply the script to them. 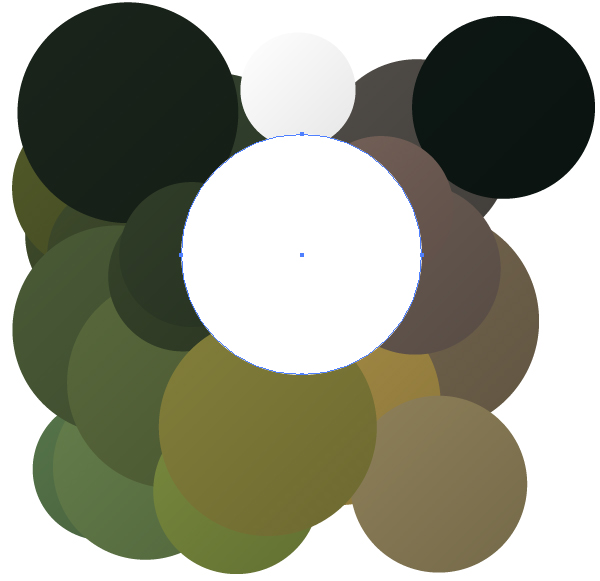 Use the script to divide the circles into smaller ones.

Define the basic elements of our composition: the face, the hand holding a flower, and the flower in the lower part of the image. Turning on and off the visibility of the upper layer, zooming in and out, divide our objects in these places into smaller ones.

You can use other scripts while creating our mosaic. Here are some more examples of the usage of the scripts: the "Splitter.js" script divides the selected object into four. 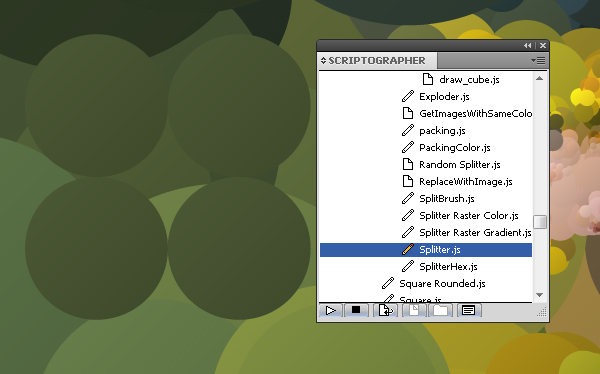 The "SplitterHex.js" script divides the selected object into seven. 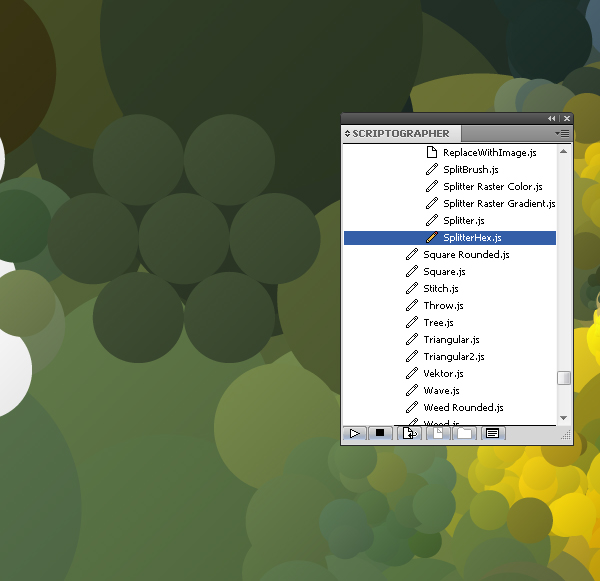 The "Splitter Raster Gradient.js" divides the selected object into smaller objects and changes the solid fills into gradient fills.

The "Exploder.js" script divides the selected object into smaller ones and moves them randomly.

Using the techniques, which are described above, the result is this vector portrait that consists of circles. 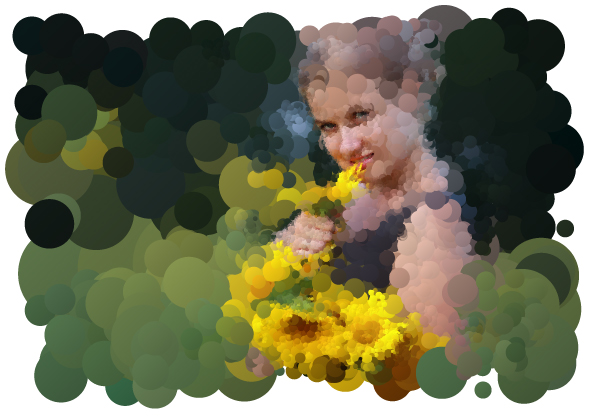 The object of which the mosaic consists of can be a star, a heart or any other object, created by you. 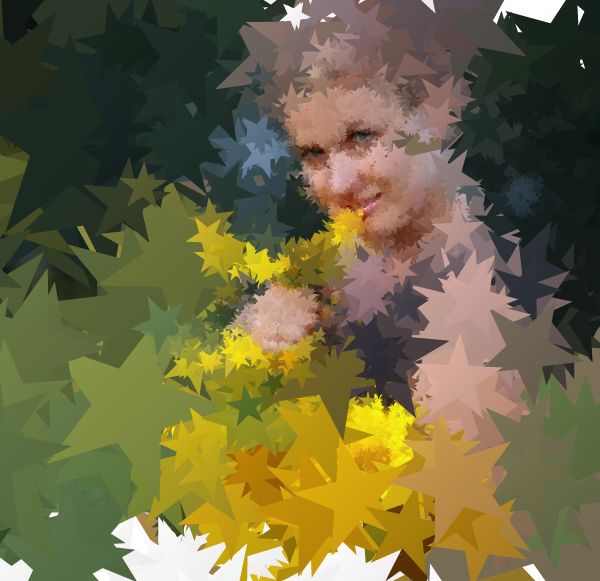 I hope you liked this tutorial and now you can create vector portraits using this simple, special method.

It's really cool that the quality and the size of the photo doesn't matter at all! After the creation of the mosaic you can increase it to the size you want. That's why I'm so fond of vector graphics.