Let's design a mobile phone advertisement. It's inspired by mobile phone posters, billboard designs, and magazine advertisements. We'll be reviewing using Smart Filters and Objects in this tutorial, as well as multiple techniques to create this design.

Before we get started, let's take a look at the image we'll be creating. As always, the full Photoshop file is available via our Psdtuts+ Plus membership. 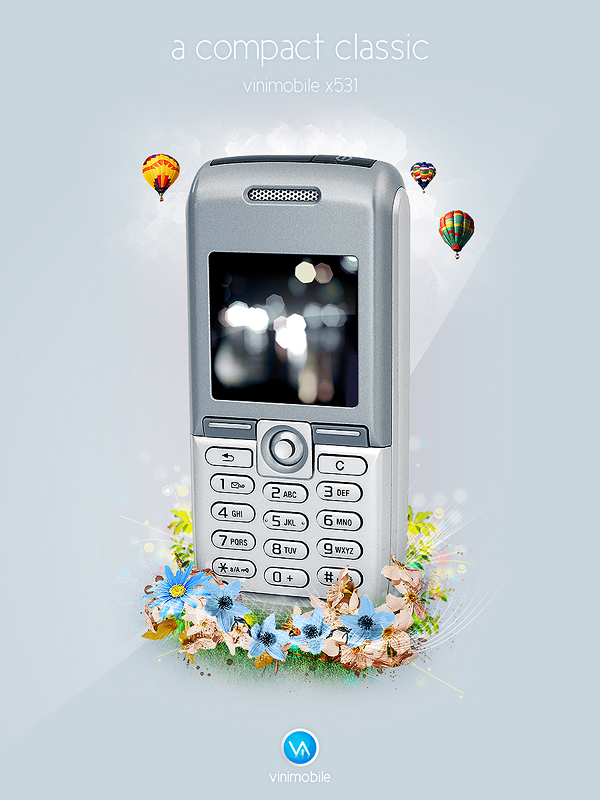 Once you've found a mobile phone image you like that has a big enough resolution, go to Photoshop and open a new document (Ctrl+N). Then choose a color for the background layer. I chose a light blue/grey (#cad6dd). Select the Ellipse Tool (U), and make an oval form with it. Then transform it over whole of the image.

First, Right Click on the layer in the layers palette and then select Blending Options. Put the Fill Opacity on 0%. Press Gradient Overlay and put the Blend Mode on Overlay, Opacity on 45%. Make sure the gradient goes from White to Transparent. Then set the Style on Radial.

Place the phone image into the document. Then use Free Transform (Ctrl+T) to fit the image in the document. Pick the Magic Wand Tool (W), and Click on the background color. Then press Add Layer Mask.

Now that you've cut out the phone, turn the layer back on. Then go to Filter>Sharpen>Sharpen. Then go to Blending Options and add an Outer Glow. Also, put the Blend Mode on Overlay with an Opacity of 25%. Pick a color that you want to glow out of the phone. The size of the glow depends on the size of your document; I used 180px. 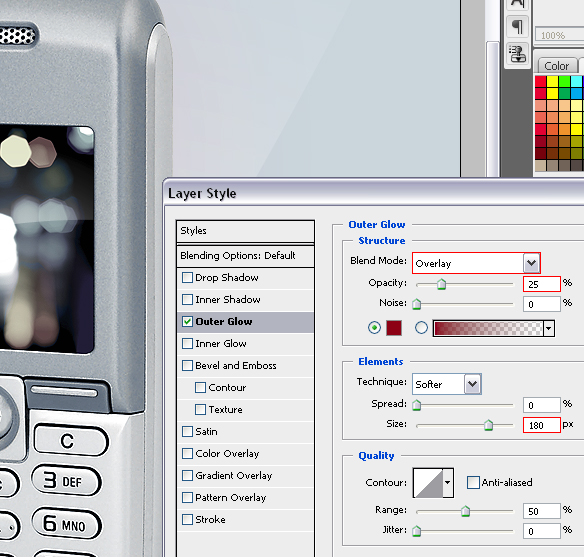 Open your field of grass image. Drag it into the document on top of the phone image. If it's too big use Free Transform (Ctrl+T) to scale it down.

Add a Layer Mask to the layer. Make sure the mask is filled completely with black, set your foreground color on Black (D) and use the Paint Bucket(G) to fill the mask. Then pick a big Soft Brush (B), and paint white on the mask underneath the phone. Also, paint a bit of an overlap as well, as shown in the results below. 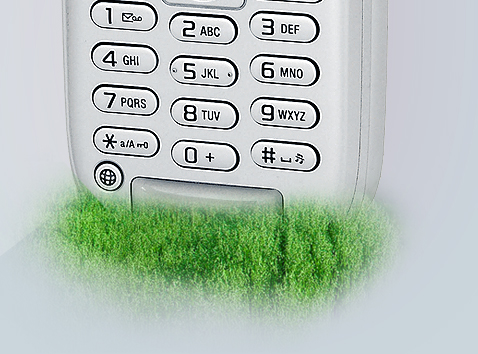 Find yourself some beautiful flowers. Put them in the document. Then get rid of the background so you only keep the flowers. You can do this by giving it a Layer Mask, picking a Hard Brush (B), and then painting the background away.

Another option to remove the background is to use the Pen Tool (P). This tutorial shows you how it works in case you don't know it. If you're lucky and the image has a flat background color, then use the Magic Wand Tool (W), or Select>Color Range may be a good quick choice as well. Use the 'Blur Tool' (R) where you think it's needed to create more depth.

Next go to Filter>Convert For Smart Filter. The mask will disappear, but you can still change the mask and image by double clicking the layers image found on the layer palette. Then Transform (Ctrl+T), and put it on the bottom of the phone. The magic of Smart Filters/Object is that you can always transform an image back to it's original size.

Now go to Filter>Sharpen>Sharpen. Do this twice. You'll see Sharpen two times in the layer palette. At the end of each Sharpen filter you see an icon with two arrows. Click on one of these and a box will pop up. Leave the Mode set to Normal, but put the Opacity at 50%. After hitting OK, the opacity of the second Sharpen filter will automatically be set at 50% as well, due to the awesomeness of Smart Filters. 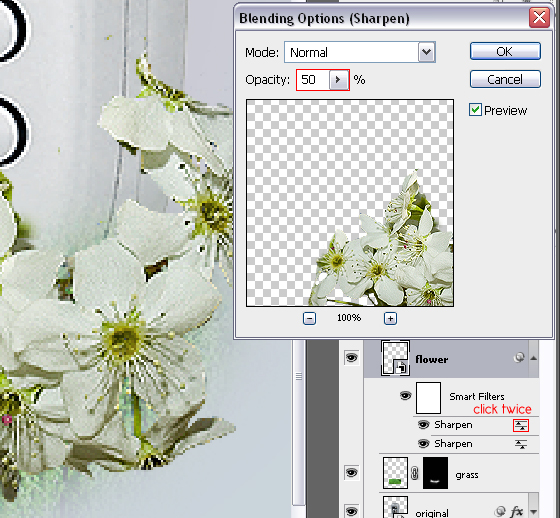 Next we'll change the blending options. For Outer Glow use a Blend Mode of Overlay and Opacity of 75%. Be sure to use a Black color. Note that the Size of 90px depends on what size you're working in on your document setup. For Color Overlay we want to give the flowers a red color. Set the Blend Mode on Overlay and the Opacity on 35%. 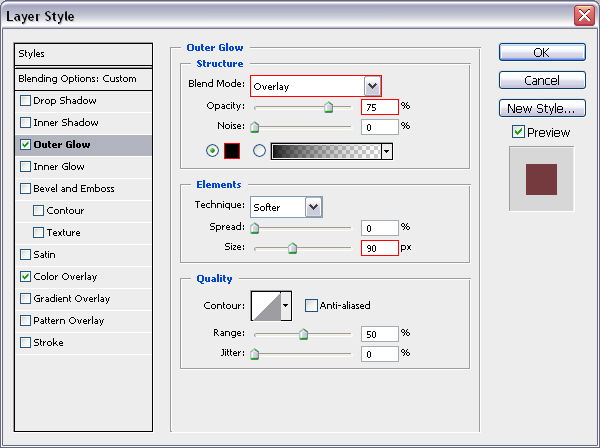 Find yourself more flowers, plants, and other fun stuff. Then repeat the same process as used on the flower. I added two bunches of red flowers for the background flowers, and in the front some blue ones. I didn't convert them to Smart Filters, but rather sharpened them directly on the layer. It's best to only use Smart filters/objects when you're not sure of the size, filters, or when reusing multiple objects that you may change later. I also found a ladybug image and put it on one of the flowers.

You can also do some fun stuff with cloud brushes and air balloons, put plants behind the phone, etc. Keep adding more images and details until you're happy with it! 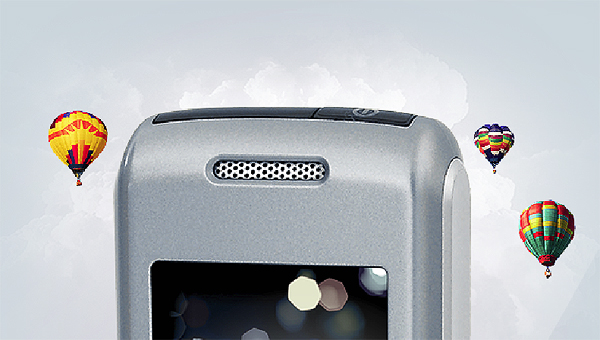 Now to add some brush work to the background. I used splatter brushes and vector brushes on the area behind the phone.

Be sure to create new layers when you use brushes. Tip: Most brushes aren't really sharp, so I Sharpen them often.

I also made my own brush to add the sparkly design to the screen. Pick the Brush Tool (B). Then go to Window>Brushes (F5). For the Brush Tip Shape pick a hard brush with a Diameter of 35px, Hardness of 35%, and the Spacing of 25%. Set Shape Dynamics to a Minimum Diameter 100%, Scattering, and Scatter of 600%. Set Other Dynamics to Opacity Jitter of 85%.

Put the Opacity of the new brush on 45%. Then create a layer behind the phone layer, and you'll see you've got to click only once to get that sparkly effect. I used a white color for the brush and put the blending mode of the layer on Soft Light. I also created two other ones with colors of blue and red. I set the blending mode of their layers on Overlay. 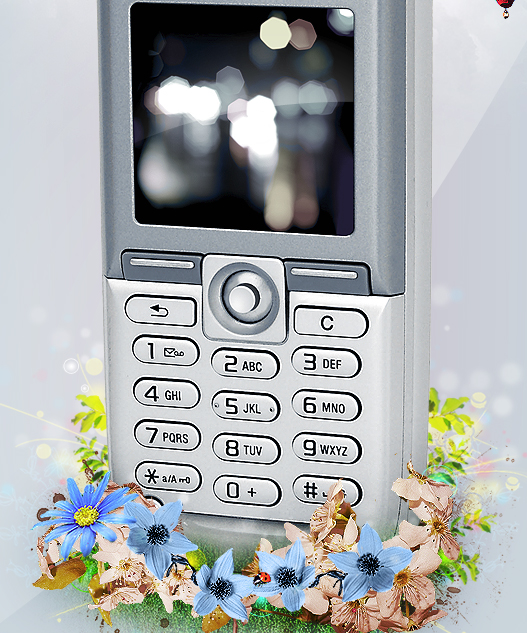 Almost finished! As you can see, on the finished advertisement I made some line design elements and placed them on the flowers. That was made with Illustrator. To do that let's open Illustrator. Then create a new document, it doesn't matter which size. Pick the Rectangle Tool(M) and black as your Fill. Leave the stroke set at None. Then make your screen entirely black. I do this because we'll be working with white lines.

Grab your Line Segment Tool, and create a white line with 1pt stroke. This time use a Fill of None. 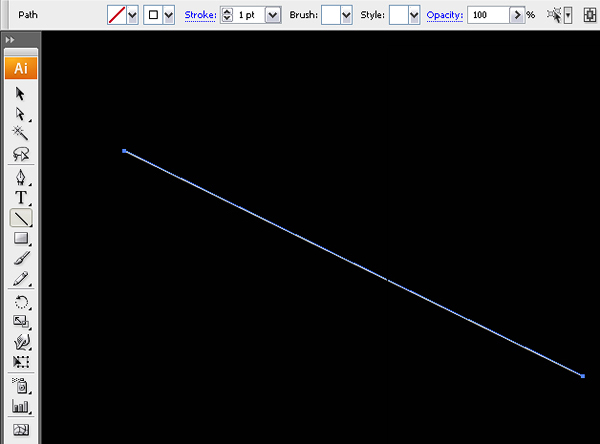 Pick up the Pen Tool (P) and create a new Anchor in the middle of the line you just created. Use the Direct Selection Tool (A) to move the Anchor Point.

Get the Convert Anchor Point Tool (Shift+C) and simply Click and drag your anchor point to another direction.

Make another line the same way we just did in the step above.

We'll be using the Blend Tool (W) for creating more lines between the two we just made. It's very simple, Click on the first line and then the second. You'll probably see there's only one line between the two you made. 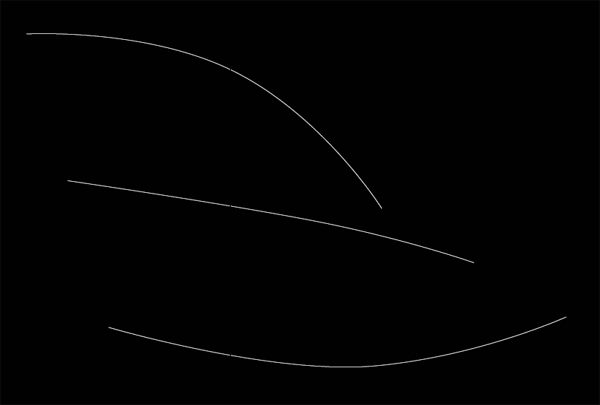 Let's correct that. Press Enter, while your Blend Tool is still on and the lines are still selected. A box will appear. Set the Spacing to Specified Steps of 25. And now you have a blended linear design element. Tip: You can play with your anchor points, use more than 2 lines, and experiment to get different looks.

Copy (Ctrl+C) the lines, and Paste (Ctrl+V) them in Photoshop. A box will pop up. Choose Paste as a Smart Object.

I also made them into brushes especially for this tutorial, so you can download these instead of creating your own shapes in Illustrator. Download them here. Put the line layers blend mode on Overlay. Then place them over the flowers. Make a Layer mask and where the lines stop, and use a Black Soft Brush to make it fade out. 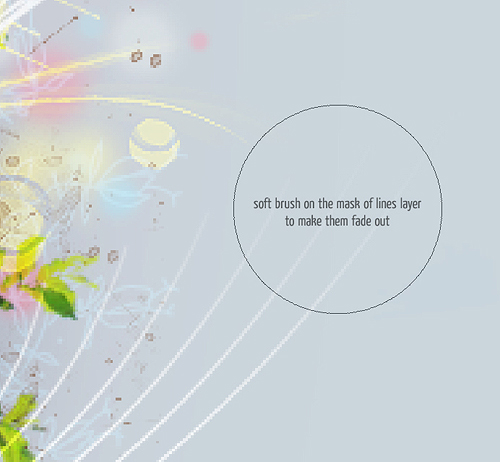 Now let's add the final details. Create a title; I used Cicle font for this. Then add a logo for the mobile phone company. The final result is below. 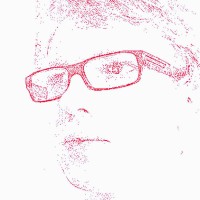 ViniMan
My name is VincentVC. I live in the Dutch part of Belgium. I'm 17 years old at the moment and I can't get enough of art and music..
Weekly email summary
Subscribe below and we’ll send you a weekly email summary of all new Design & Illustration tutorials. Never miss out on learning about the next big thing.
Advertisement
Download Attachment
Translations