In this tutorial, we'll combine simple vector shapes, layer styles and generous amounts of shininess to create the perfect magnifying glass for all your search icon needs. Let's get started! 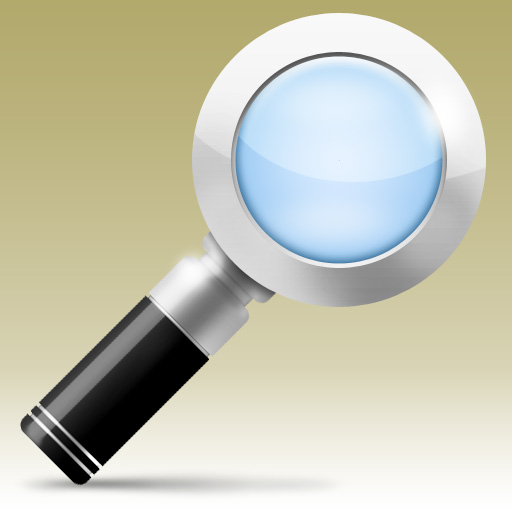 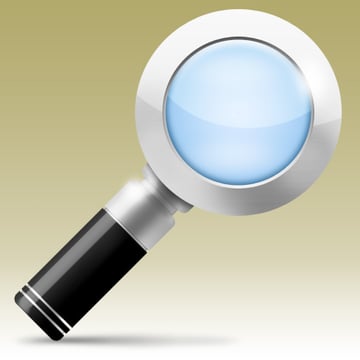 Open a new blank document and choose 512 pixels for both width and height. We'll be creating a magnifying glass in 2D frontal view, lit from the top-left corner.

Select the Ellipse Tool (U) from the toolbar. Holding down both Shift and Alt, click-drag a perfect circle near the top right-corner of the canvas. Holding down Shift allows you to draw a circle instead of an ellipse while Alt allows creation from the center instead of from the corner (1a). Name this layer "outer rim," double-click it to open the Layer Style window and add a Gradient Overlay. Choose a light-to-medium gray hue (1b). 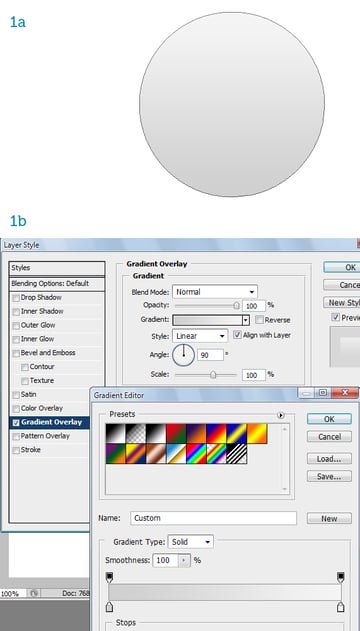 Duplicate and scale down the ellipse, naming it "inner rim" (2a). Adjust the Gradient Overlay so the shades are flipped vertically and make them darker also (2b). Add an Inner Shadow (2c).

Copy the "inner rim" circle, scale it down just a little bit and name it "lens" (3a). Change the Gradient Overlay so the lens has a nice blue shade (3b). Clear the Inner Shadow. Add Bevel And Emboss to make it look convex (3c). Finally add Inner Glow to add some shadow to its rim (3d). You can rasterize the three layers now (3e).

We're aiming for a shiny icon so let's add strong reflections now. With the Elliptical Marquee Tool (M), select the upper half of the "outer rim" (5a). Hit Command + J to create a new layer from this selection. Name it "outer rim refl," change its blending mode to Screen and set the Opacity to 40% (5b).

Select the "inner rim" layer now. Using the same technique explained in Step 4 (use the Burn and Dodge Tools) enhance the lighting by darkening the upper half and brightening the lower half. 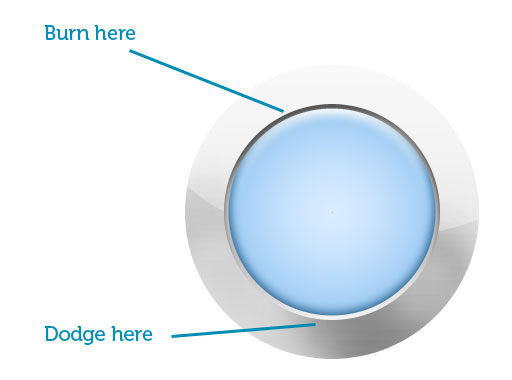 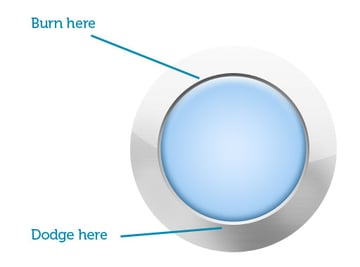 Add a strong reflective highlight to the "lens" layer using the method from Step 5: marquee-select the upper half (7a), create a new layer via copy with Command + J and set it to Screen and 40% Opacity (7b). 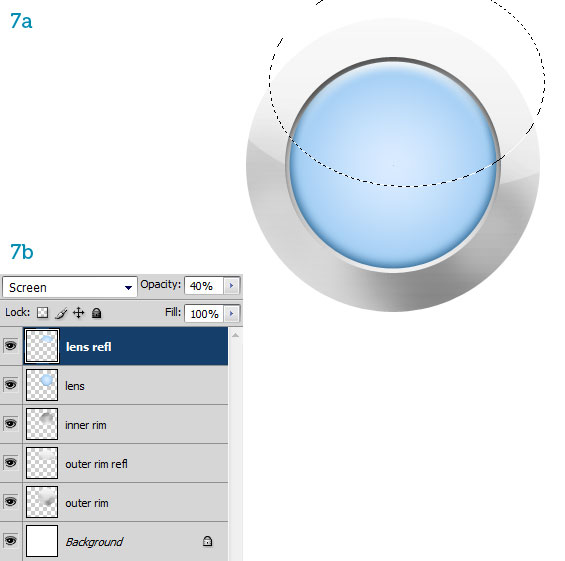 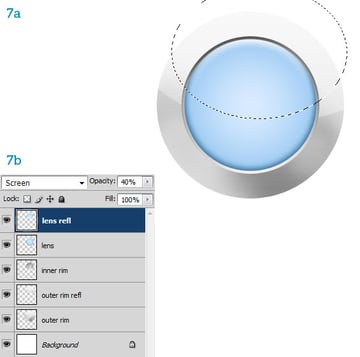 Group the existing layers together and name the group "lens." Let's create the handle now. Grab the Rounded Rectangle Tool (U) from the toolbar and set the Radius to 10px (8a). Create a black rectangle and name it "handle" (8b).

With the Rectangular Marquee Tool (M) select three thin strips (8c). How do you do that? One way is to make the first selection, then hold down Shift and make the remaining two. Shift adds to the selection (to subtract use Alt). Hit Shift + Command + J to cut the strips and paste them into a new layer. Name it "rings" and temporarily toggle its visibility off by clicking on the eye next to it in the Layers palette. On the "handle" layer select the top rectangle (8d), use Shift + Command + J to create a new Layer via Cut. Call it "handle top."

Select the "rings" layer and add a horizontal Gradient Overlay (9a) and an Inner Glow (9b) so they look round and receive shadows from the other sections of the handle. Scale the layer down horizontally so the strips are narrower than the rest of the handle (9c).

Make two copies of the "handle top" layer and position and scale them according to image 11a. Move the smaller section behind everything and name it "neck." Add to it an Inner Glow as in image 11b.

Now we can flatten all the handle layers together into one which we'll name of course "handle." Grab the Burn Tool (O), adjust its settings as in image 11c and reinforce the shadows by painting a vertical strip down the whole length of the handle (11d). Now with the Dodge Tool enhance the highlights with another vertical brush stroke (11e).

Select the rounded "collars" by the "neck" with the Marquee Tool (M) and hit Shift + F6 to invoke the Feather command and set it to 3 pixels (12a). With the Burn Tool (O) make a few brush strokes to darken the selected area. The effect is subtle but noticeable (12b). 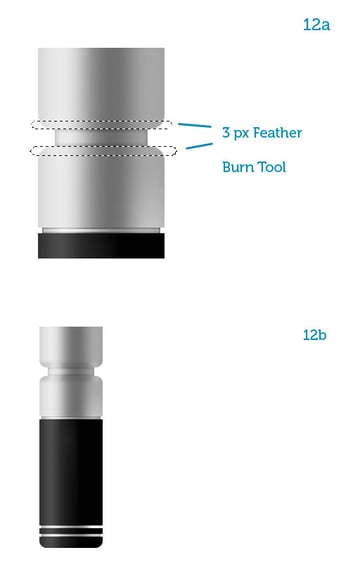 Let's make the handle shiny, too. On a new layer create white highlights, conforming their shape to the handle. Set this layer's blending mode to Soft Light (13a, 13b). Cut the upper highlights into a new layer (13c), reduce its Opacity to 70% then apply a 2 px Gaussian Blur filter (13d).

The handle is finished. Group the layers, move the group behind the "lens" and rotate it 45 degrees to the right (14a). Create a shadow from an ellipse filled with black, set to Multiply, with 50% Opacity. Blur it how you like with the Blur Tool. Now add a backdrop to the icon and a couple of blurry highlights on the handle and on the lens' rim. These are white circles on separate layers, set to Screen, with 80% Opacity. Apply Gaussian Blur to taste (14b). The icon is finished! 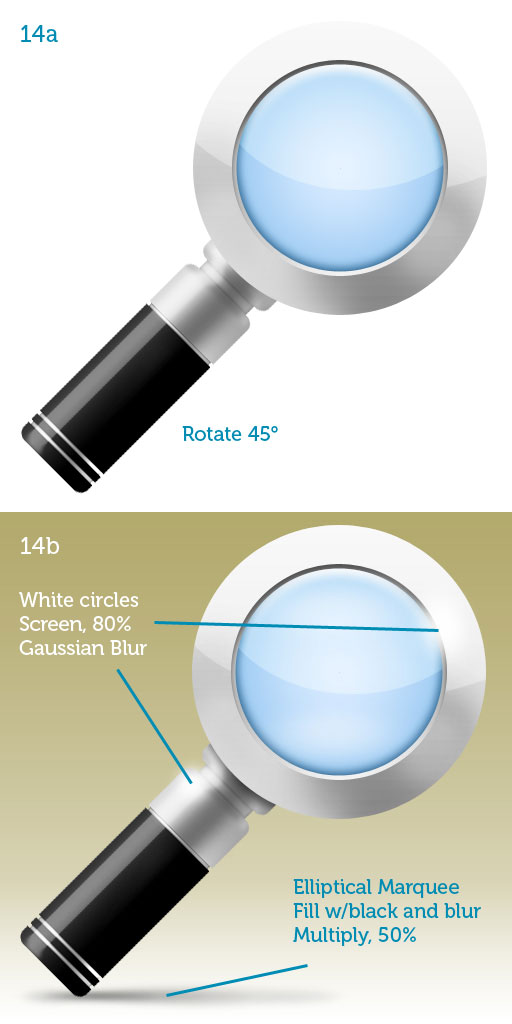 The icon designer's best friends in Photoshop are the Pen Tool and the Layer Styles. This time we have also employed Photoshop's amazing brushes to refine the lighting of the magnifying glass. This ability sets Photoshop apart from Illustrator, which would otherwise be best suited for creating this icon.

Icon DesignAdobe Photoshop
Did you find this post useful?
Yes No
Would you like to provide feedback (optional)?
Cancel Submit
Want a weekly email summary?
Subscribe below and we’ll send you a weekly email summary of all new Design & Illustration tutorials. Never miss out on learning about the next big thing.
Sign up