We all know the typical "flying snowboarder through the air" photo. Add a lens flare, and you've got it made! In this tutorial we're giving the ol' concept a spin by using wavy lines that suggest motion and paint splatters for snow. Let's get to it!

Our video editor Gavin Steele has created a video tutorial to compliment this text + image tutorial.

The theme of the piece we're about to create is snowboarding and consists in a combination of photography, special effects and typography. The photo is the focal point and is no more than a cut out snowboarder. The type is the actual name of the performed trick, an alley oop. And finally, the wavy lines and splatters tie in the two elements by suggesting motion and speed.

And like in much of my work, the piece has a retro atmosphere brought together by a nostalgic Sega font and a vintage-like color palette. It's a straight forward job, so let's get right to it!

First of all, plan your layout. You can see what I'm trying to achieve in the image below. 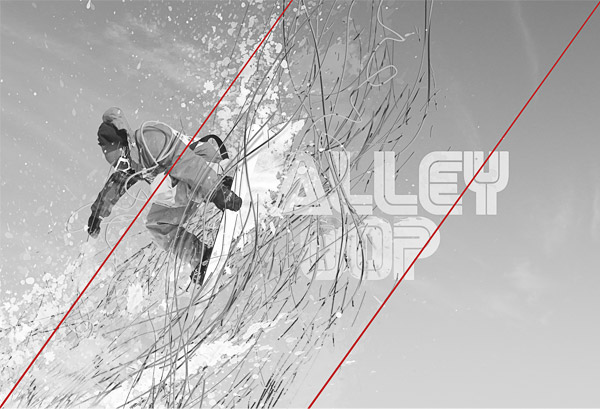 Open Illustrator and while using the brush tool (B) draw several lines of different lengths and thickness. You can change the thickness by altering the stroke value.

If you don't have Illustrator, creating something similar in Photoshop is also easy. Just make a path while in path mode with the Pen Tool (P) and stroke the path according to your desired brush settings. 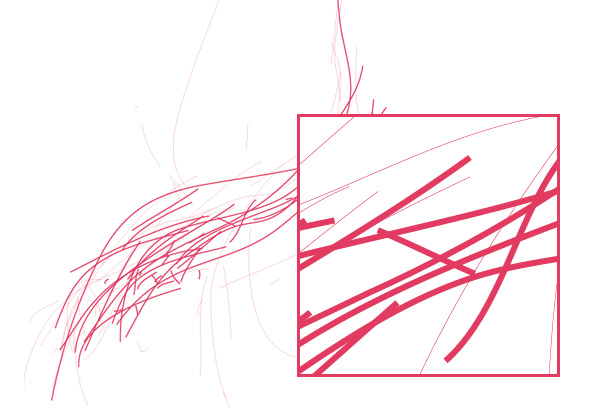 Select all the lines and go to Effect > 3D > Extrude and Bevel. Change only the position and Extrude Depth until you get a similar result. 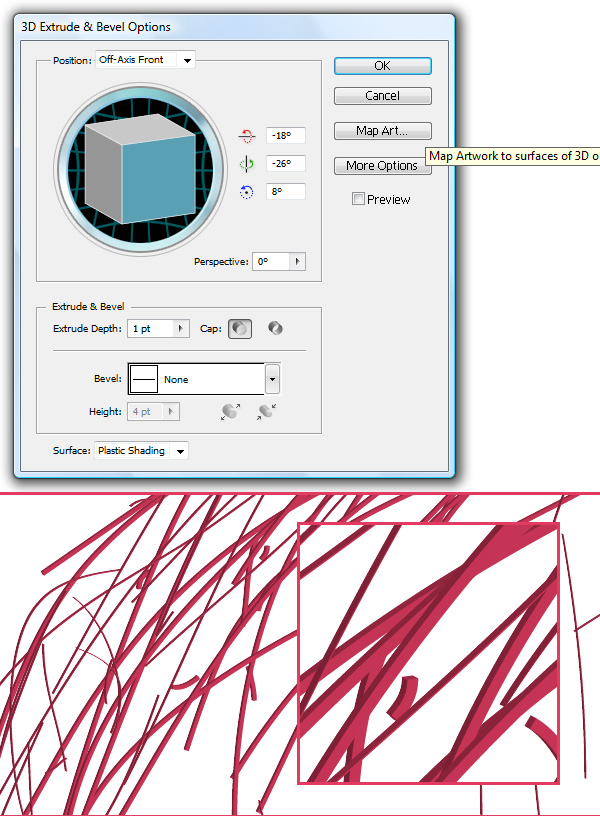 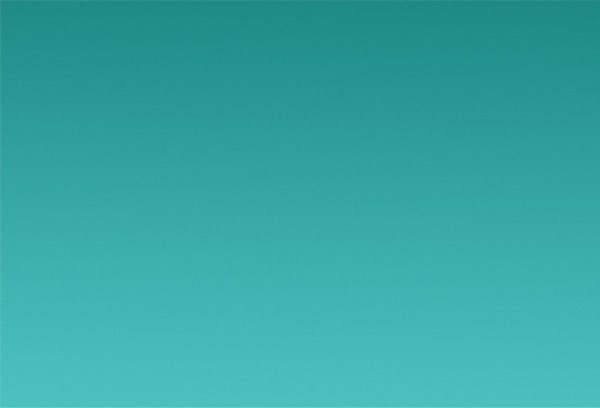 Copy (Command + C) all the lines and paste (Command + V) them into the newly created Photoshop document.

Repeat the process to create another set of lines with the same color as the background's cyan. Place them on top. 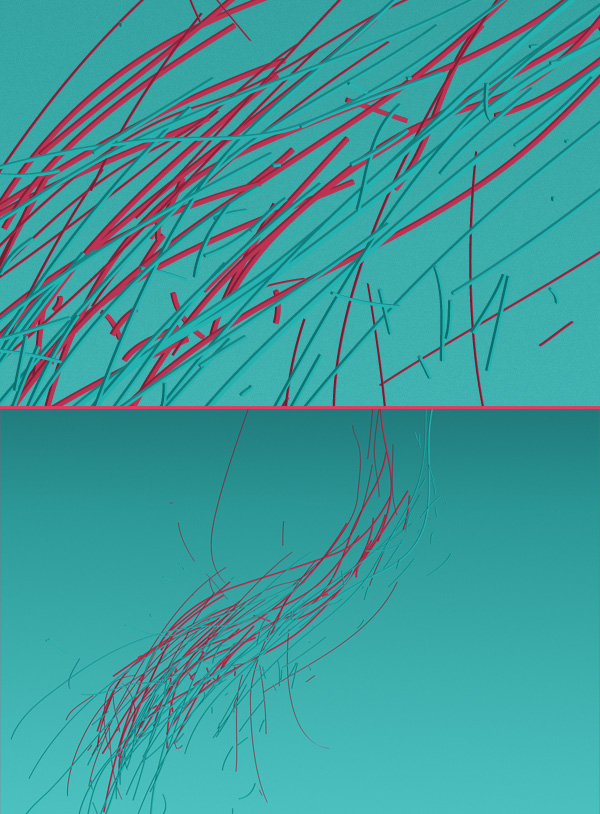 For this next step, I've hidden the layer of the cyan lines. Select the red lines' layer and duplicate it (Command + J). Make it a clipping mask by holding Alt and clicking in between the two layers in the layers menu. Right click on the layer, select rasterize. That will flatten it. Then, just set the layer's blending mode to multiply and move the lines around in order to get this effect. 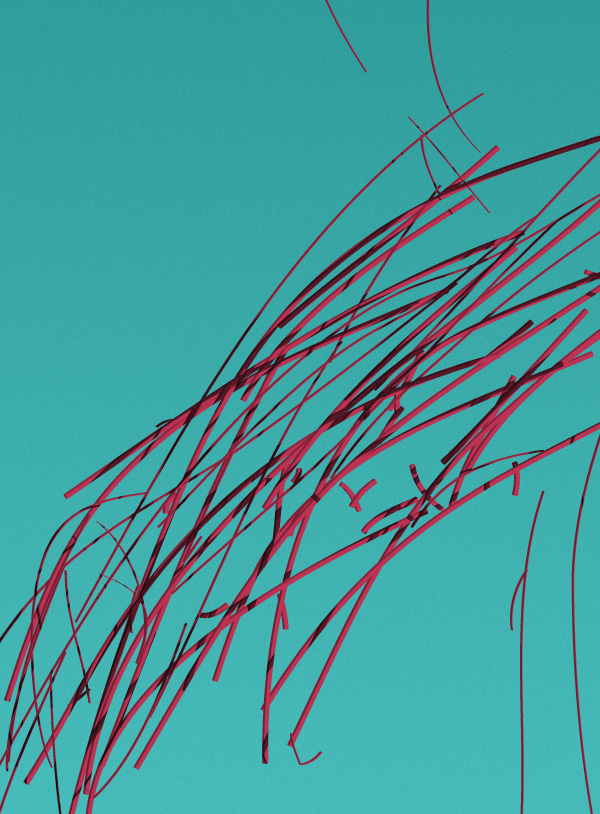 Repeat the process for each the following line-work. 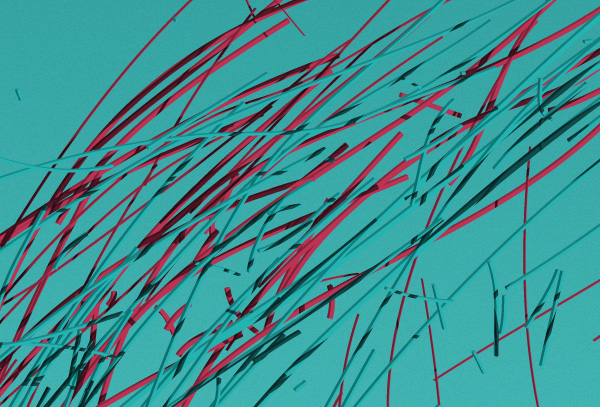 And umm, more lines. Feel free to just duplicate already existing lines, but be careful as to not become too repetitive.

And one more solitary line with this color: #C5A78A. It matches the snowboarder's pants. 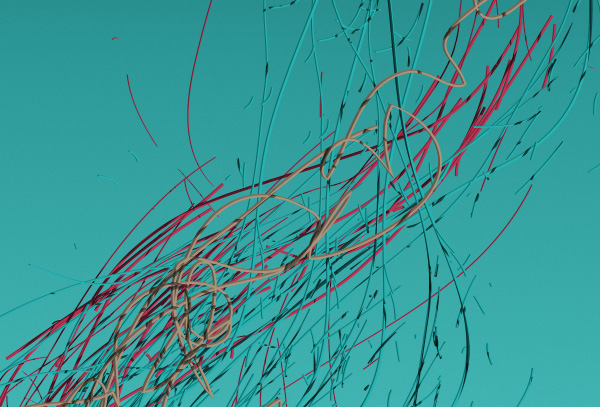 It's time to add the snowboarder. Get this photo from sxc. There are a few other snowboarders on that page, but they are wearing different colored clothing and performing different tricks, so the chromatics and type of this tutorial require this particular snowboarder. Change the hue to -11 by going to Image > Adjustments > Hue & Saturation.

I also added a set of red lines that come over the snowboarder.

Create another line on top of the snowboarder. Use the marquee tool to select the part you want to place behind his hand, then hide it by going to Layer > Layer Mask > Hide Selection. 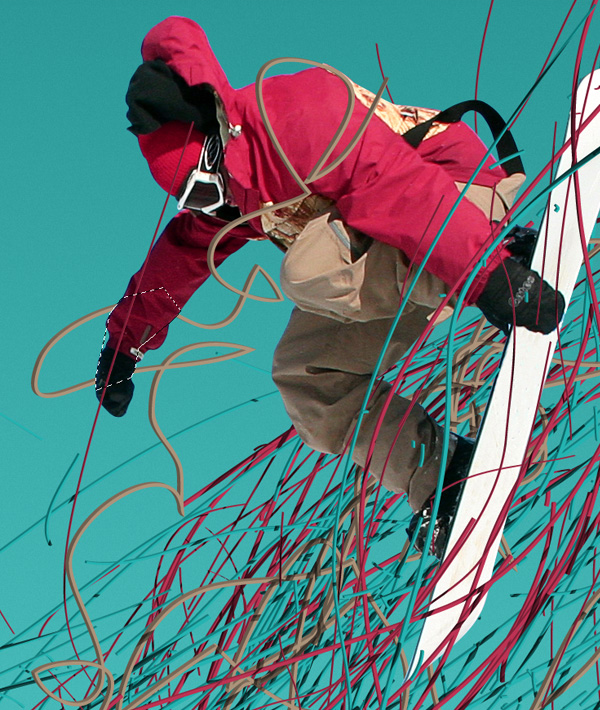 Now get these splatter brushes from bittbox. Paint one cyan splatter near the base. We're painting with the background colors to try and fade out some of the overly complicated lines. 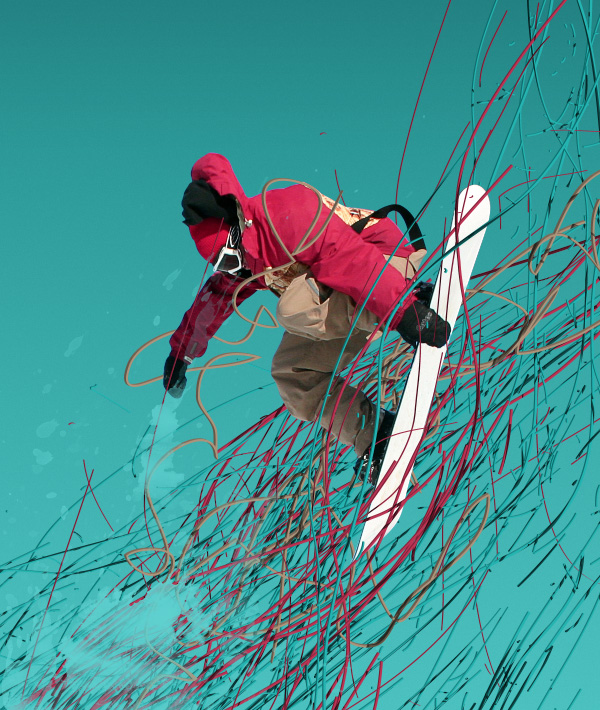 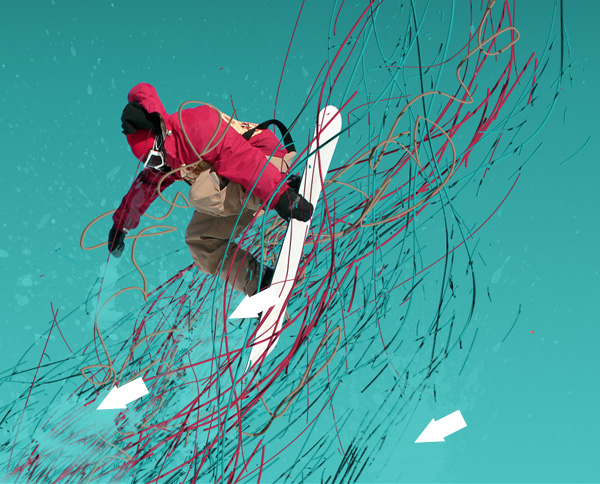 It's time for some white ones.

The green ones (#3baa7c) are only meant to broaden the color palette. They look pretty strange now, but I made them with the color adjustments in mind (see next step). Right behind the snowboarder, there's a pink one (#bc3253). 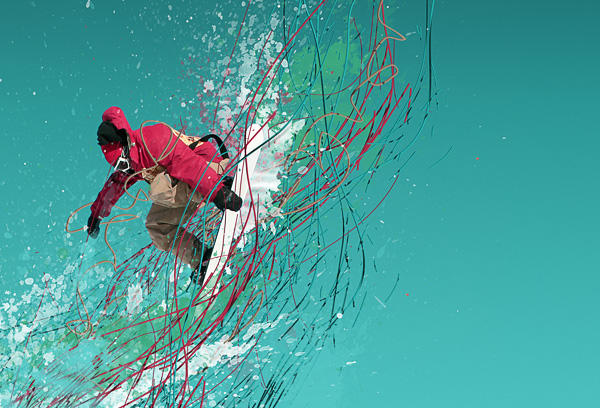 And now it's time for the big change. Go to Layer > New Adjustment Layer > Gradient Map. Select the purple and orange one from the list, set the layer's Blending Mode to Screen and Opacity to 90%. 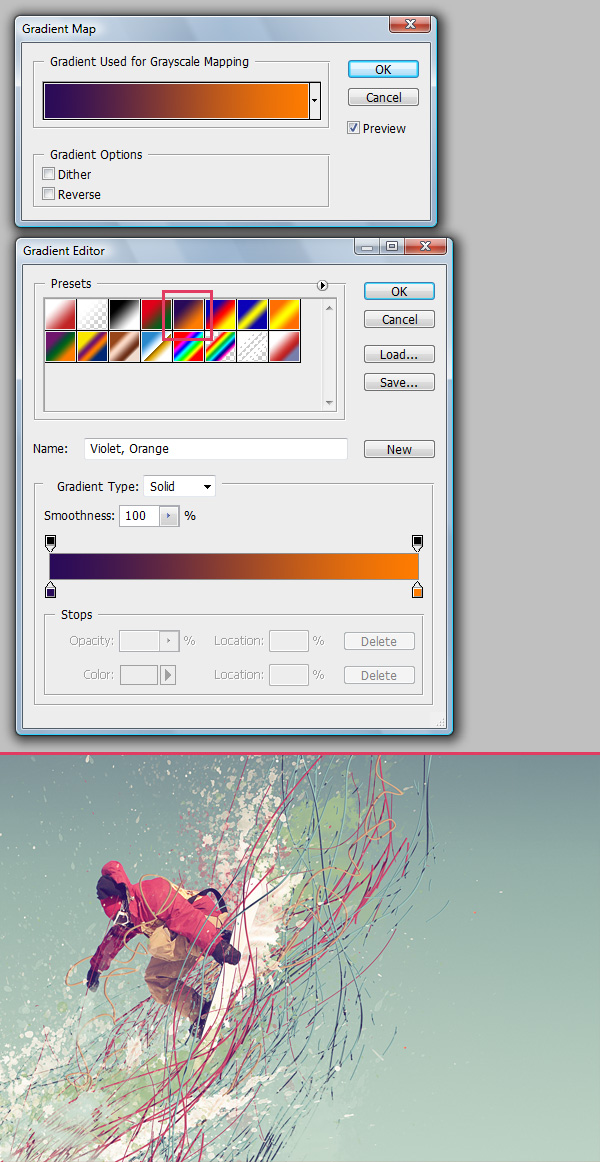 Add one more Gradient Map and choose two colors. Left and right are orange (#ff6e02) and the center is green (#7b7b37). This one should be on Soft Light and 30% Opacity. 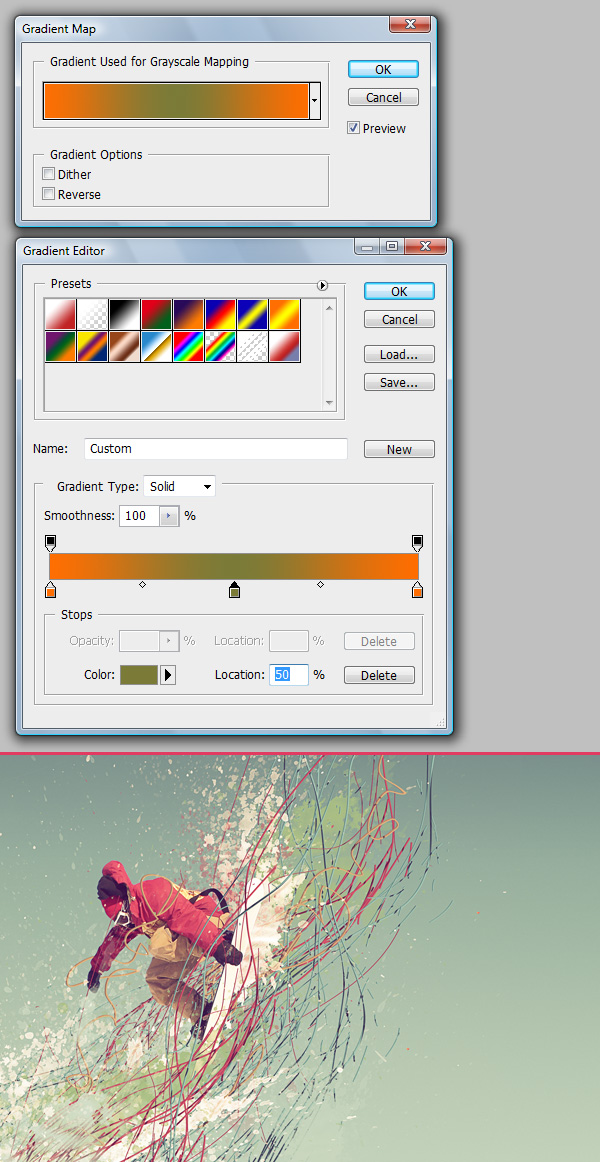 Get this font and type in the first word. Place it so that is above most of the line layers. Choose a light yellow: #e0bd9b.

Duplicate it (Command + J) and move it left and up by only a couple of pixels. Change this one to a darker yellow: #c7a98c. 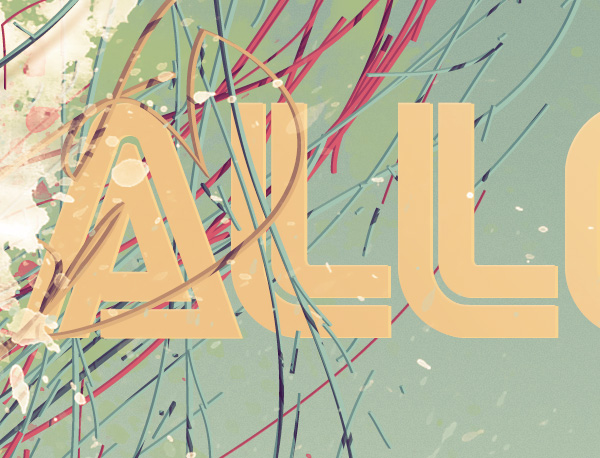 Add a layer style by double-clicking on the layer. Add a Bevel and Emboss, as well as a Gradient. Use the settings shown below.

Create a new layer and paint two splatters - white and green. Make it a clipping mask so that it only appears inside the letter. 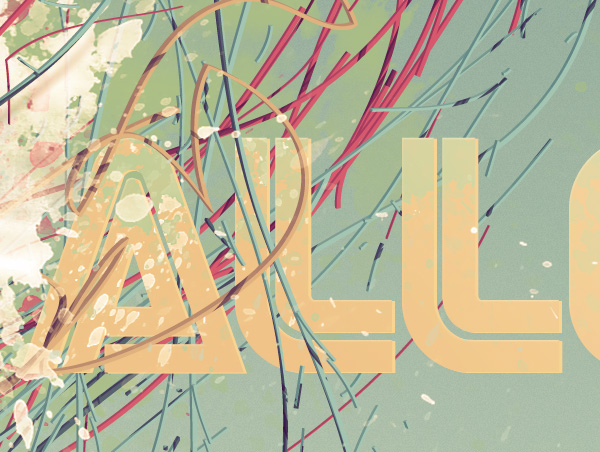 Find the layers of the lines that come across the image. Duplicate it (Command + J) and move the layer above the type's layer. Make it a clipping mask, rasterize it, desaturate it (Command + Shift + U) and go to Filter > Blur > Gaussian Blur. Blur it enough to make it look like a shadow and take the layer Opacity down to about 30%. 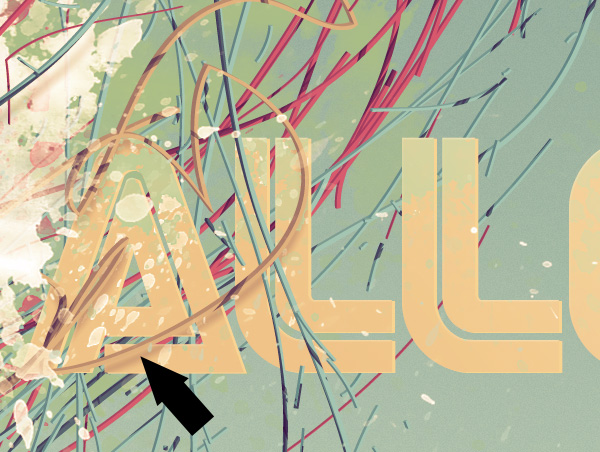 Repeat the painting process on the other text as well. However, type the second word behind more line layers so that it has a depth of field. This will change the position of the shadows. Lines that are above all type will have closely positioned shadows on the first word, and farther positioned shadows on the second. The lines that only cover the second word cast a close shadow on the word. 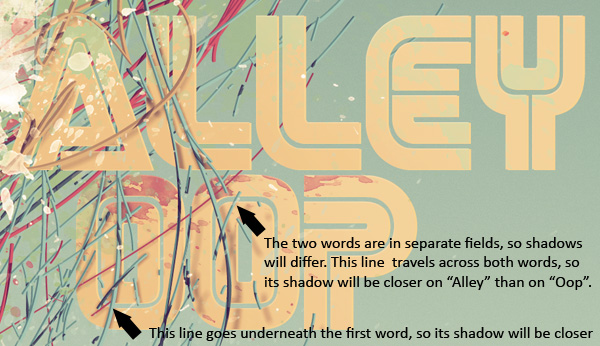 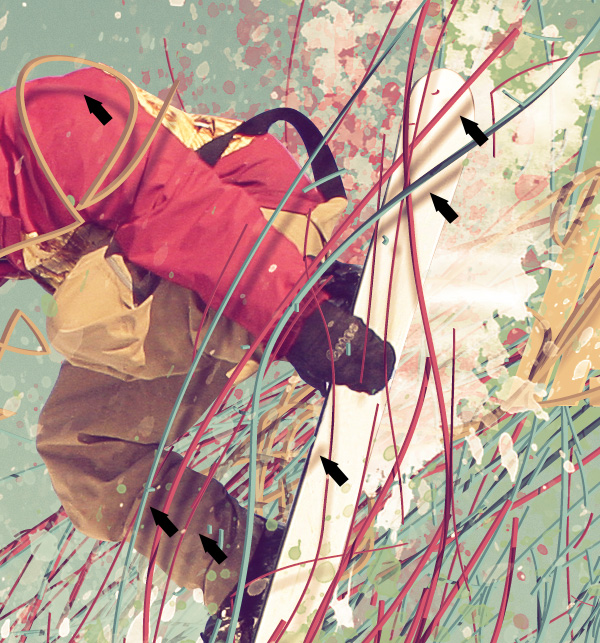 Get this photo from sxc and desaturate it (Command + Shift + U). Place it on top of all the layers, change its Opacity to 40% and Blending Mode to Overlay. It will give it a little more realism and slightly brighten the image. 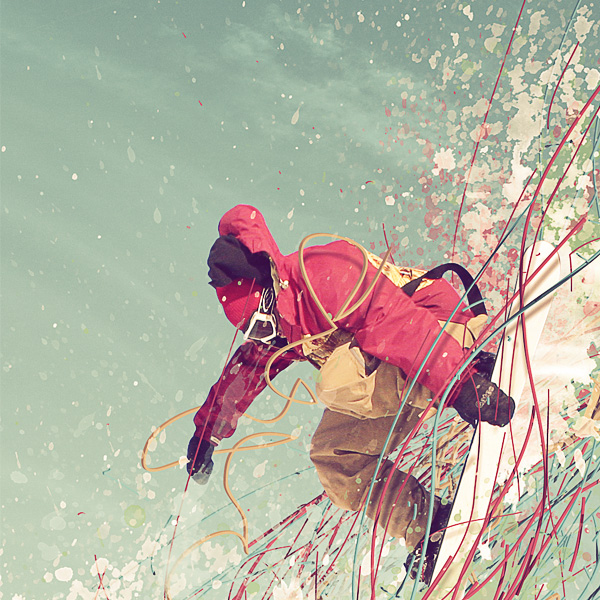 Well, that's it folks! I hope this tutorial has proven to be useful. You can view the final image below or view a larger version here.