In this tutorial we will use vexel techniques to create an intense, flowing illustration using abstract shapes. Let's get started!

Let's create a new document in Photoshop. Go to File > New. I used an inverted A3 size, but remember you can use any other. Also remember to work with a high resolution (300 DPI or higher) in order to have a high quality image if you want your work to be printed. 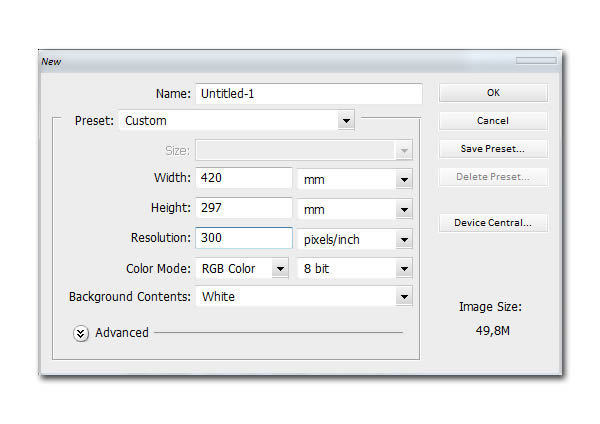 Place your stock on the canvas. Since we are going to work with the flow of her hair, keep some more space on the right than the left. 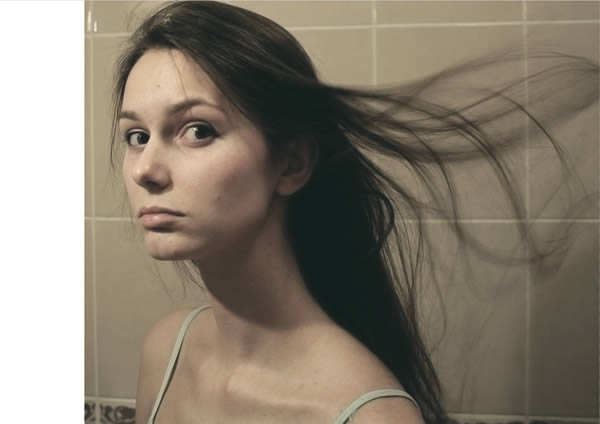 Create a New Layer and use a big white brush to fill some of the parts surrounding the girl's face. Then, create another layer and use a hard brush to sketch your ideas. This is the best part. Just go wild and do not be afraid to do some strokes. It does not matter if you are working with mouse or tablet, this is going to be just a reference.

In order to use properly the Pen Tool, firstly we have to give some properties to the Brush Tool. Select the Brush Tool (B) and change the settings according to your likes. Ticking "Shape Dynamics" is going to be very useful for the last part of this tutorial. Changes in this step are very important if you want to achieve different effects with the Pen Tool, but we will not go deeper in this tutorial.

Select the Pen Tool (P) and tick the "Paths" symbol. In this step you are also able to chose between activating or not the Rubber Band. It helps you to see how your trace is going to be like, as long as the mouse cursor moves around the screen. 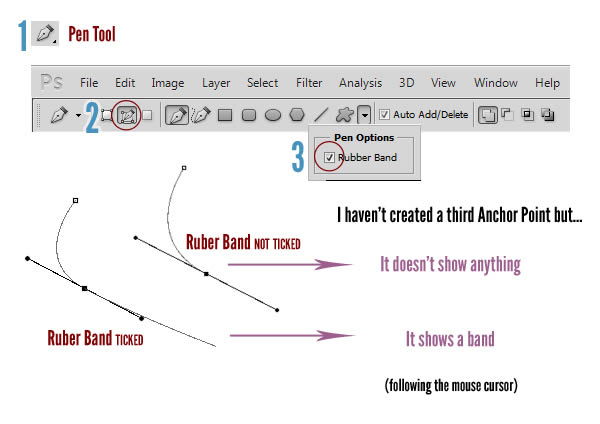 As a review, I would like you to remember the process when you are tracing (with this technique) using the Pen Tool. Trace with the pen tool, right click and select Stroke Path. After that, a small window will open. If you keep "Simulate Pressure" ticked, borders may fade (or the effect you added to the brush in Step 4). If you do not, you will get a strong trace, very useful for the kind of line art we will be doing. 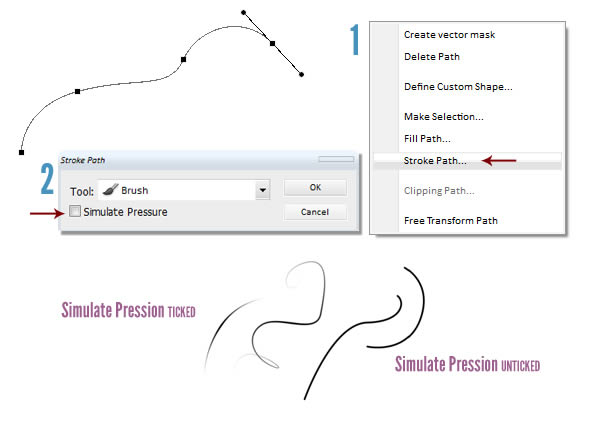 I like to start the line art working from the big shapes, to the small ones. In this case, her silhouette is a big shape. Let's start with it! Follow the blue pattern in first place until you get something like the second picture. The color I used? #7f0000. 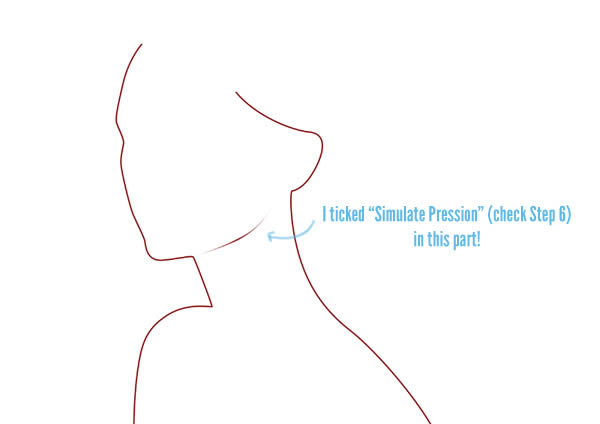 Let's start working the eyes. Just reduce the stock layer opacity and trace over a new layer. You may need to change the brush size for details. I used an 8px rounded brush. I ticked "Simulate PRessure" for eyelashes and unticked it for the eye outline. Also added some details. For the nose, instead of choosing "Stroke Path", choose "Fill Path". A new window will open, check the properties and press OK. 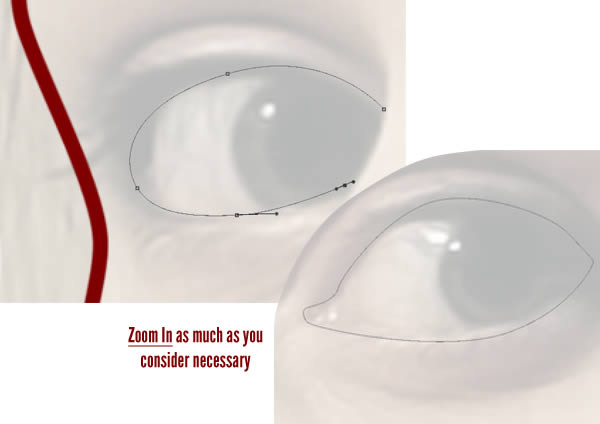 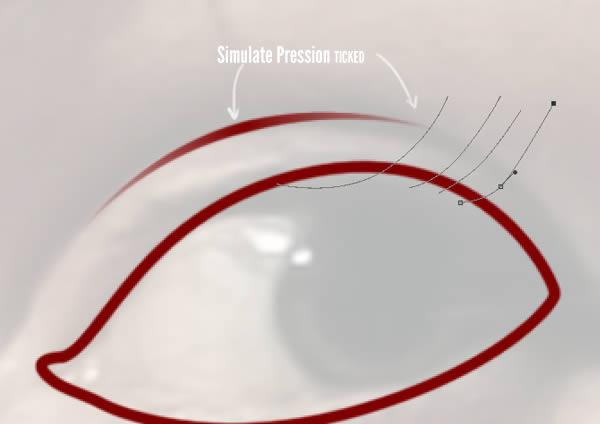 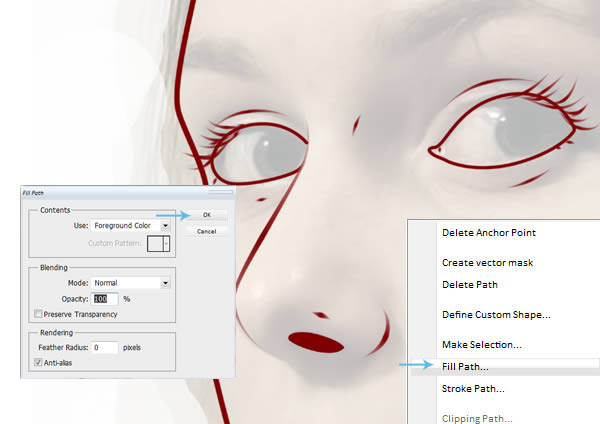 For the inner part of the eyes, I did four circles. Their properties are shown on the next image. It is pretty much the same than the previous steps, but remember to tick "Circle (Draw Diameter or Radius)" if you want to create perfect rounded circles. Copy it and place them, erasing what is not necessary. Also you may want to add some eyebrows. 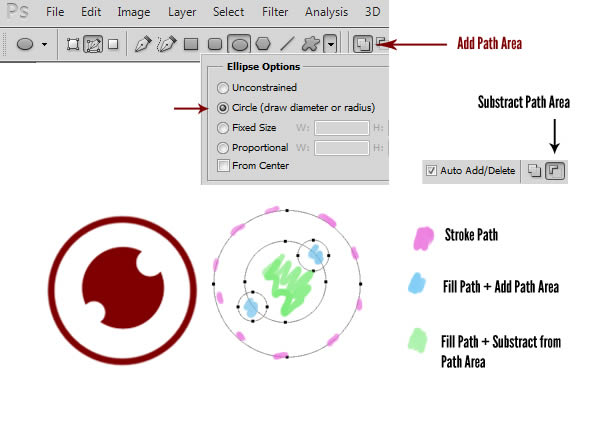 I added her lips and basic hair. I wanted to keep her lips very simple since I knew I was going to color it with red (similar to the line art).

Following the same techniques as before, just pick a 10 px hard brush and, after tracing, untick "Simulate Pressure". In this step you will be just tracing over the sketch you did in Step 3. I used the same color than before: #7f0000. Keep in mind that it would be very helpful if you create these traces in a new layer, and avoid mixing different types of lines in the same layer. 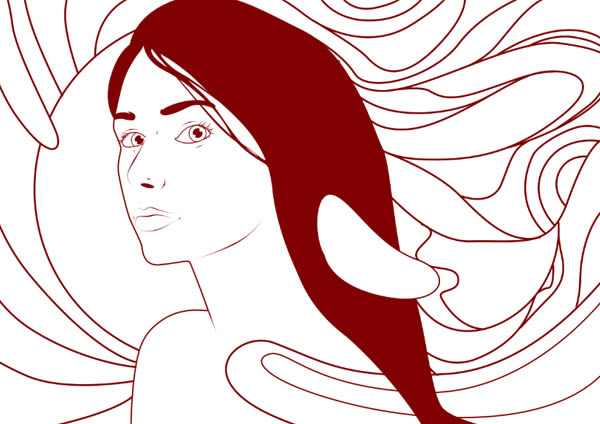 I thought it would look interesting if there was some interaction between her hair and the background. So, start tracing some solid shapes full of movement and drama. Remember to Zoom In and Zoom Out every time you need it. 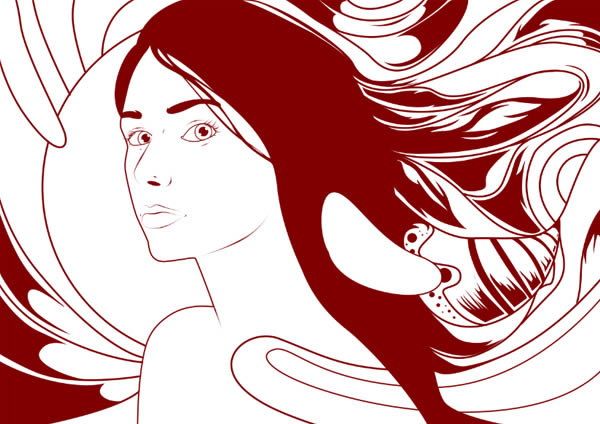 Let's start with the coloring part! This part is totally up to you. You can pick any color you want and you can use the technique you prefer the most. In this case, I used solid shapes. Always work with layers under the layers of the lines (if you want to keep your line art clean). 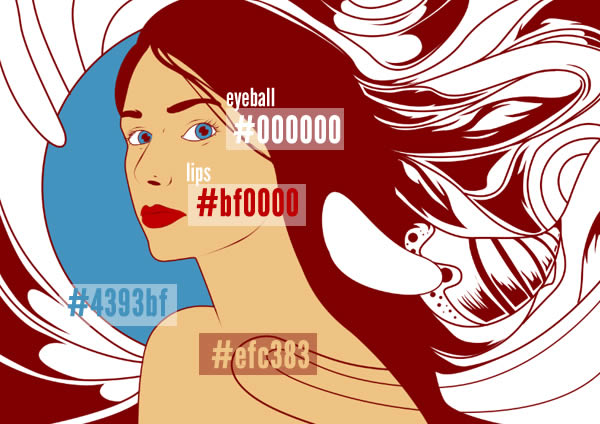 Continue coloring. For the purple part, just try placing your layer under the general line art, but over the hair shapes. Add a gradient to the blue circle. Also, I started testing with shadows, and added one for the purple shape, using the line art color, and changing its opacity to 45%. Also notice that I added some circles behind the girl's face. 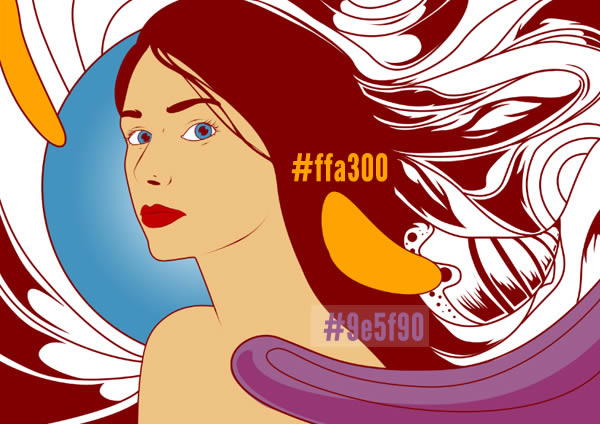 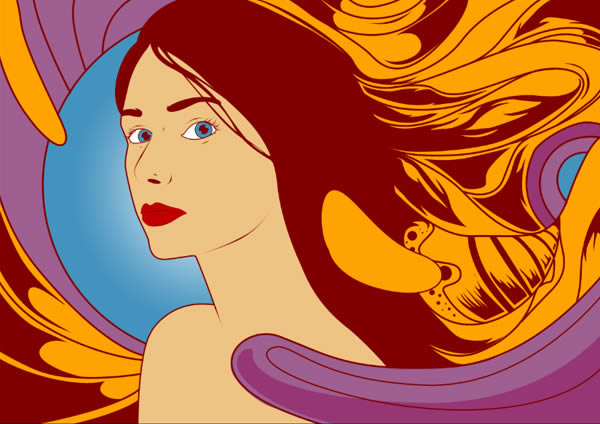 Let's add shadows and highlights. What I suggest you to do is to trace your solid shape (dark for shadows, bright for highlights). After that, instead of erasing directly, "hide" using a layer mask. Click on the "Add layer mask" icon or go to Layer > Layer Mask > from transparency. Use a big black Soft Brush in the Layer Mask, it would help you to achieve a "gradient" effect. For the Highlights I used #000000 (layer opacity: 30%) and for the shadows #7f0000 (layer opacity: 40%). You will be basically repeating this step for the rest of the abstract shapes. The result depends on your skills with the pen tool and how creative you were with your shapes. 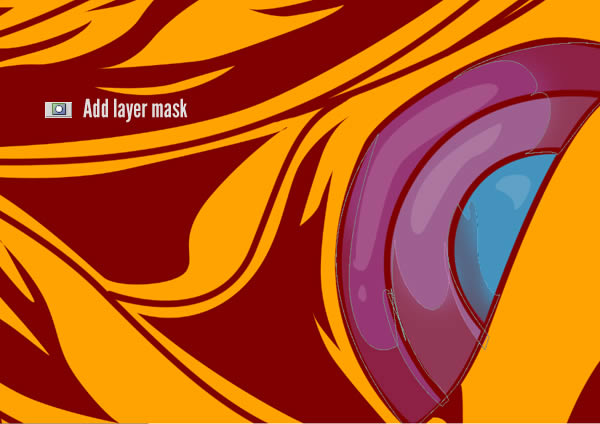 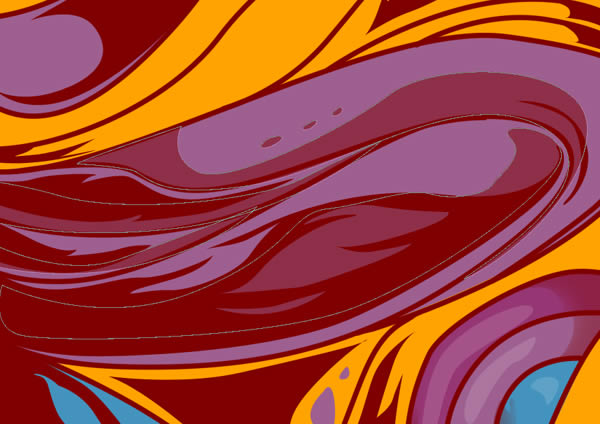 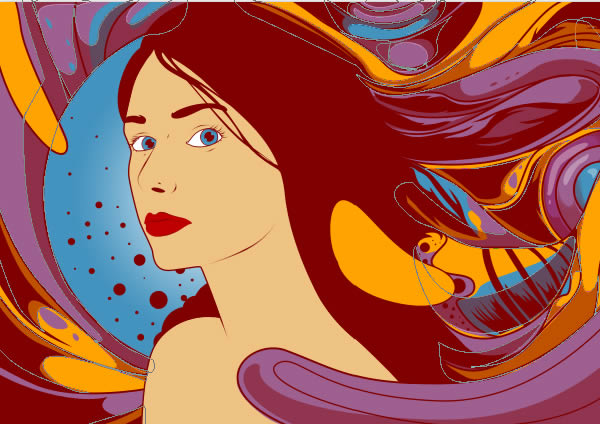 For the girl, I drew a big shape that would work as a shadow. I kept empty some space in the right, to give it a backlight look. You can follow the shadows from the original stock or create yours according to the atmosphere you want . I changed the layer style with the following properties. 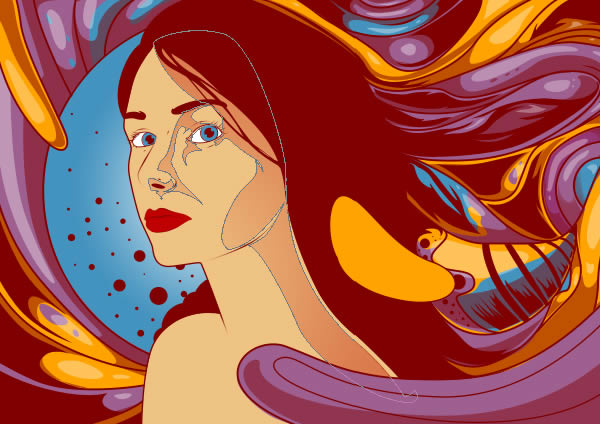 For her eyes, you will need nothing but a shadow and circles that will work as sparkles in the empty spaces the eyes had. This is pretty much what we have been doing the whole tutorial, adding shapes. Opacities and colors are up to your tastes. 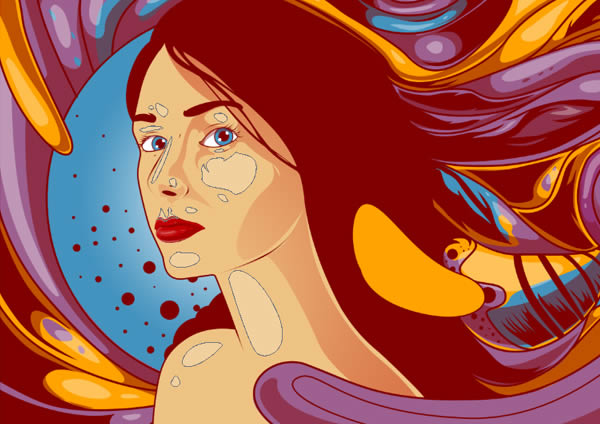 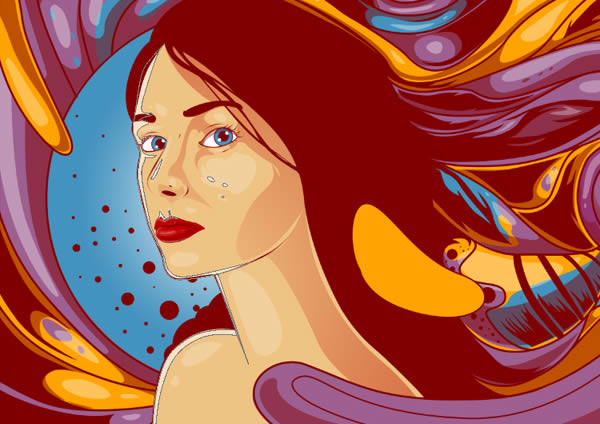 Trace some lines using the Pen Tool. For these lines we will use a 30px hard rounded brush. Remember to tick "Simulate Pressure" after selecting "Stroke Path". I used #ffa300. As much strokes and details you add in this step, it would look cooler. 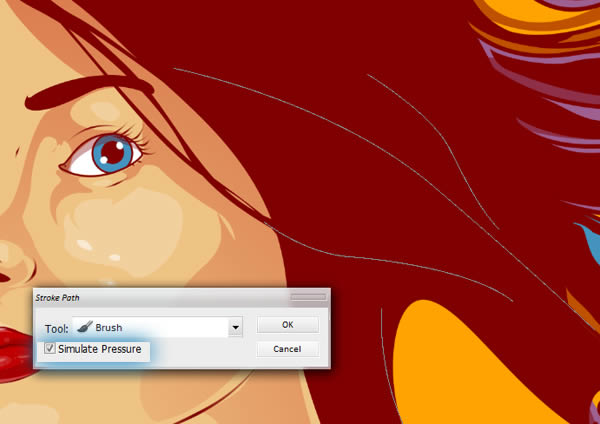 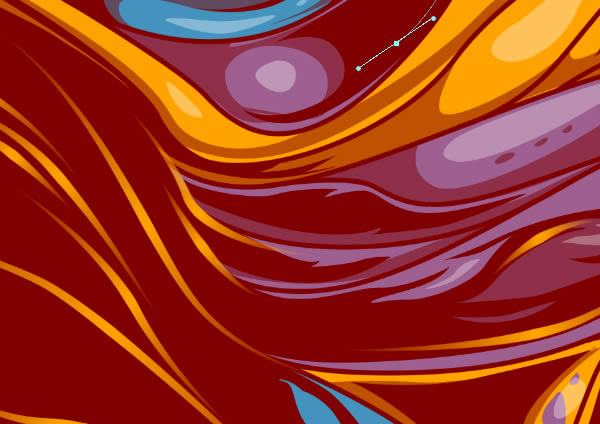 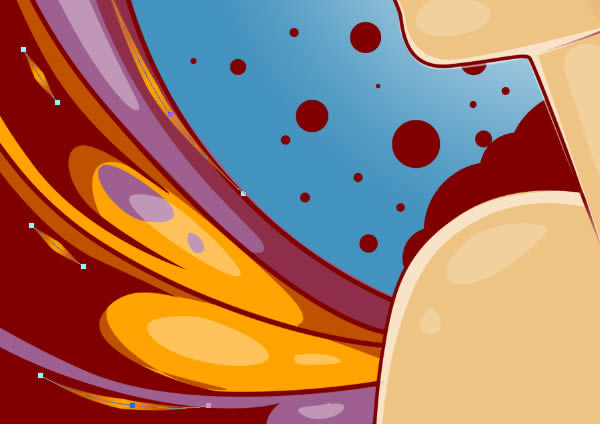 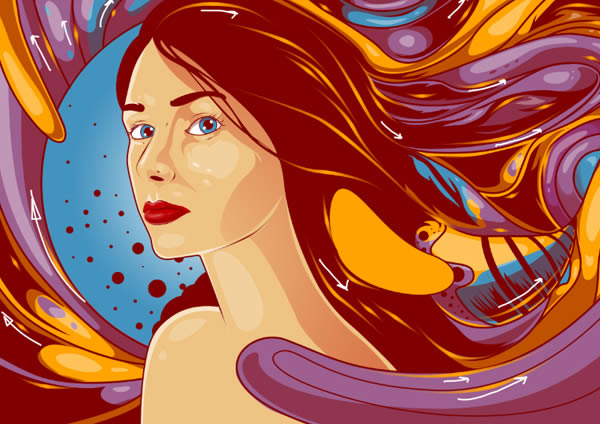 At this point, I noticed I was missing some shapes, so I decided to add some other shapes (highlights and shadows). Remember you are totally free to do whatever you want with your work: you can even erase some parts, draw some more, add textures... you decide when is your artwork finished! 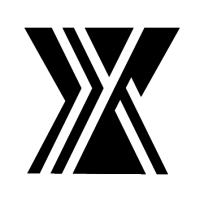 Jose D. Rodriguez Cadena
José Rodríguez a.k.a. Xposion, is an Electronics Engineering student from Colombia, passionate about digital art. His digital work goes from mixed compositions to vector illustrations. To learn more about him, check him on Twitter or DeviantArt.
Weekly email summary
Subscribe below and we’ll send you a weekly email summary of all new Design & Illustration tutorials. Never miss out on learning about the next big thing.
Advertisement
Download Attachment
Translations