Create a Flowerpot From Scratch in Photoshop

In this tutorial, I will show you how to create a flowerpot from scratch using several techniques in Photoshop.

Create a group called "Pot". Inside this group, create a New Layer called "Top". Use the Ellipse Tool to make an oval shape that will become the top of our flowerpot. Fill with any color (I've used #5b5b5b). 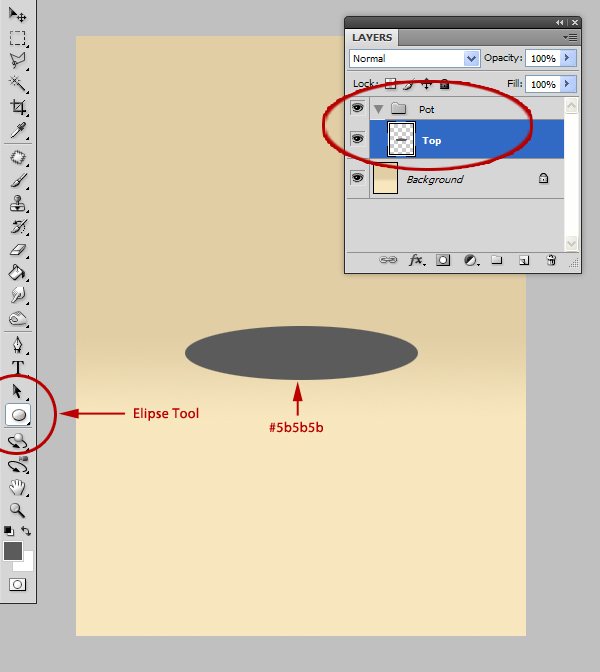 Create a New Layer called "Band" and place it below "Top". Use a combination of the Ellipse Tool and the Rectangle Tool to make the shape of the pot's band. Use a different shade of gray to make it easier to identify the pieces.

Create a New Layer called "Base" and place it below "Band". Use the same techniques to create the base of the pot. 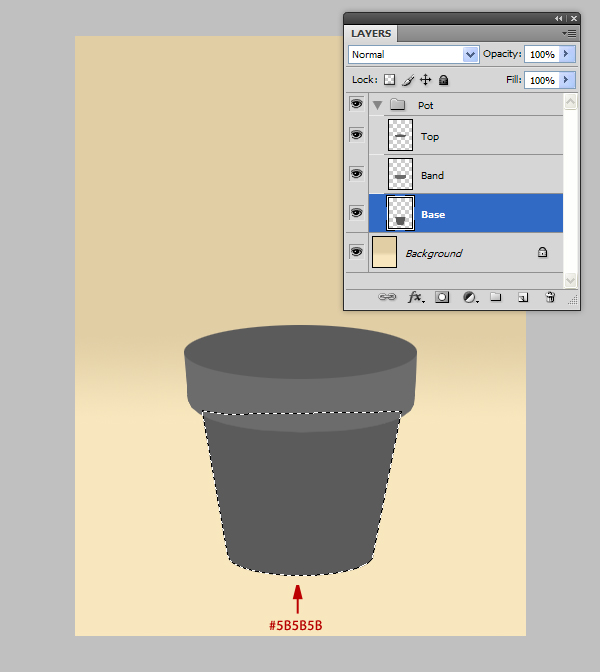 On a new layer called "Color”, above the "Base" layer", create a rectangle that covers up the entire shape, and fill with the gradient shown. Add Noise with a setting of .8%. Next, Alt + Click in between the two layers to make it a clipping layer.

Copy the "Color" layer and paste it above each shape. Make each of these a clipping layer. When you're done, you can tweak each "Color" layer to fit the shape better by using Transform (Command/Ctrl + T). 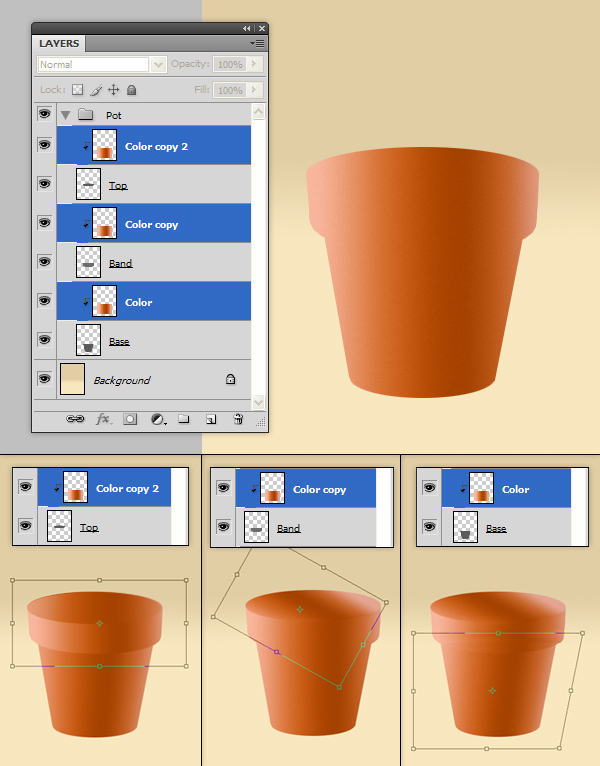 Use the Burn Tool on the "Color" layer above the "Base" layer to add depth. 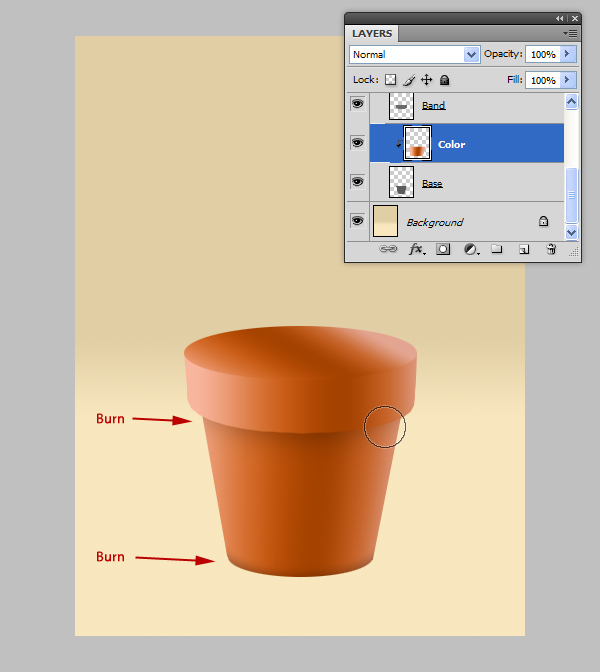 On a new layer called "Inner Circle", make an elliptical shape and fill it with gray. Just like the other shapes, we want to add a new clipping layer (name this layer "Inner Color") that has a gradient color on it. Only this time, make a darker gradient to resemble the shadows inside the pot. 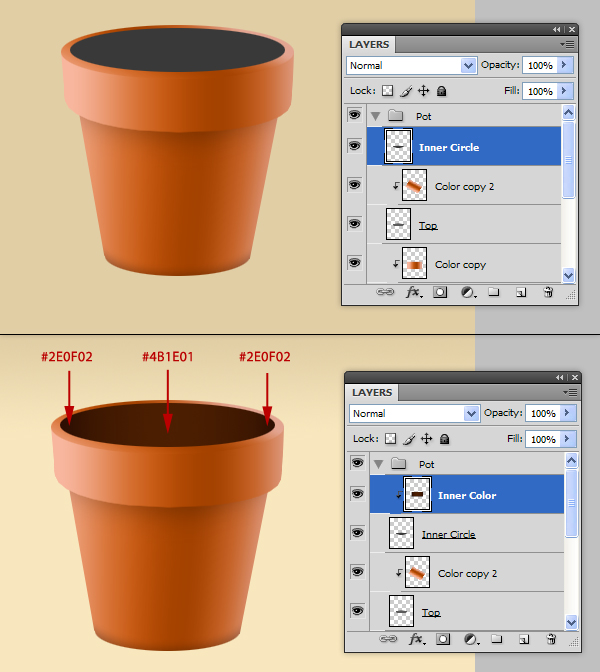 To make the pot smoother, start by selecting the "Inner Circle" layer and use the Blur Tool to blur the top edge slightly. Next, create a New Layer called "Edge" and use a feathered brush to paint in a lighter clay color (I used #E2B398) around the outer edge in the area shown below (indicated in green). Set this layer to Screen and change the Opacity to 78%.

To make the dirt, we will need to add another clipping layer. To do this, select the "Inner Color" layer and press Command/Ctrl + Shift + N to bring up the New Layer dialogue box and make sure "Use Previous Layer to Create Clipping Mask" is checked. Name this new layer "Dirt". 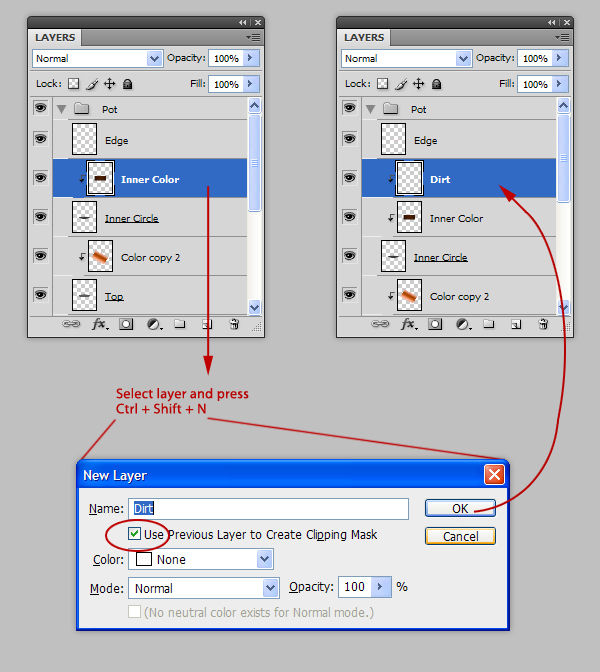 To create some dirt, first draw in a shape with a dark brown color. Give this layer some Noise set to 30%. Next, Add Filter > Noise > Median with a radius of 1 px. Now, add some more Noise with a setting of 25%. Lastly, duplicate this layer, still keeping it a clipping layer, and set its Blending Mode to Multiply. Use the Dodge and Burn Tools on the original "Dirt" layer to add highlights and shadows. 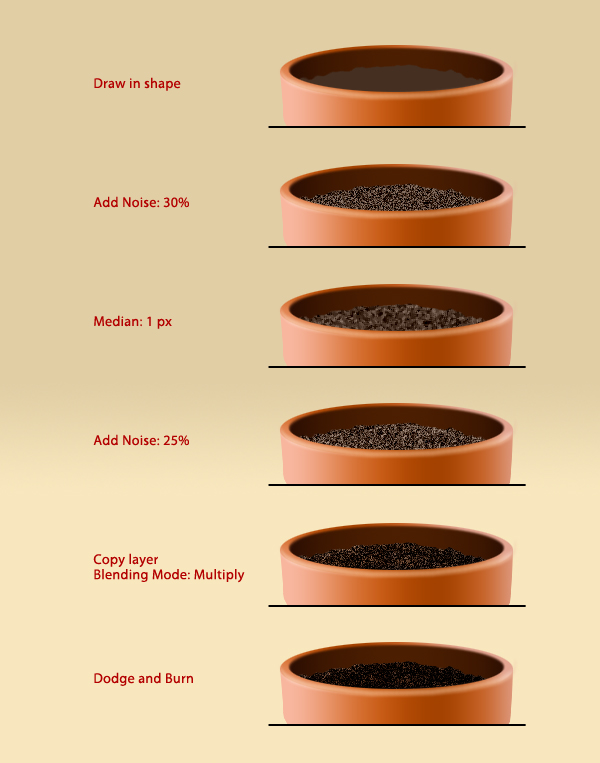 Go back to the clipping layer called "Inner Color" and use the Burn Tool to add some shadows on the inside of the pot from the dirt." 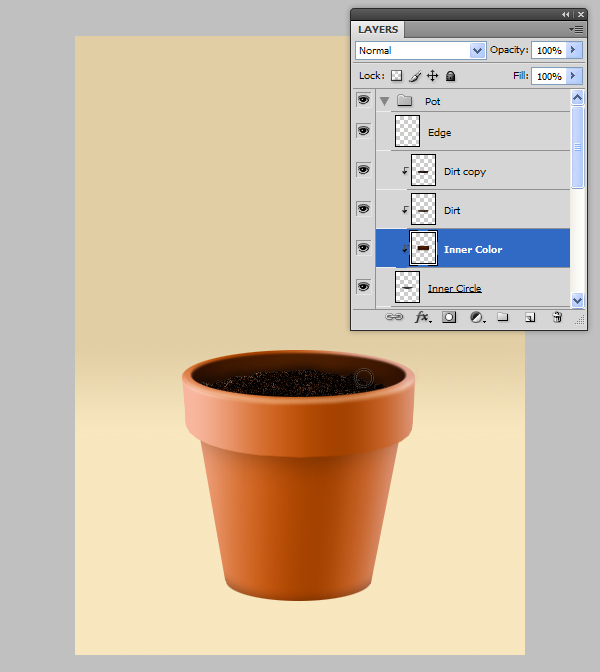 Next, we are going to create the stem. To prepare for this, create a group called "Flower" and inside this group, create another group called "Stem". On a new layer, use the Brush Tool (B) to draw in a green stem. Add a Bevel and Emboss to this layer. Use the Burn Tool to add some shadows near the top and bottom of the stem.

Make sure your foreground and background colors are set to black and white. On a new layer, create a white box and go to Filter > Render > Fibers and give it the following settings.

Warp the fibers so that they appear to follow the shape of the stem and make the layer a clipping layer. Set the Blending Mode to Overlay and the Opacity to 28%. 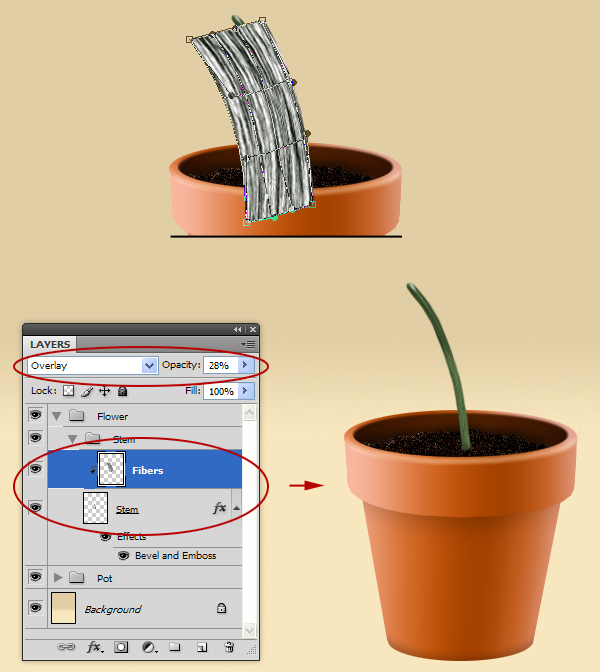 To create the flower, we first need to start by creating a New Group called "Petals." Inside this group, create a New Layer called "Single Petal" and draw a basic shape of a flower petal with a light purple color. 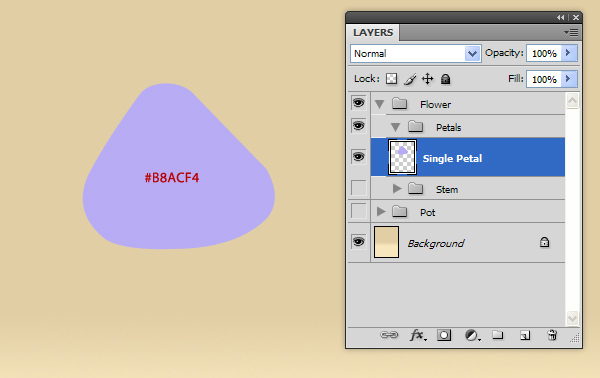 On a new clipping layer to the layer "Single Petal" use a feathered brush set to Dissolve to paint in some noise with a darker purple color. Next, give this layer a Motion Blur and Angle of 90 degrees and a Distance of 51 px. Next, add Noise set to 4.8% and Gaussian Blur set to 1.2 px.

Transform (Command/Ctrl + T) this layer so that the texture appears to follow the shape of the petal. When you're done, merge these layers together; make sure to keep the name "Single Petal".

As of now, the petal looks a little flat. To fix this, make a copy of the petal and Desaturate it (Command/Ctrl + Shift + U). Next, go to Filter > Stylize > Emboss and add the settings shown below. Set this layer's Blending Mode to Overlay.

Go back to the "Single Petal" layer and use a different shade of purple to paint in some more texture (refer to image). Merge the two layers together.

Make copies of the "Single Petal" layer to arrange the petals in the shape of a flower (use Alt + Click on your canvas to make copying quicker). Don't worry about the hole in the center, we'll fix that later.

Merge all the petals together and rename the layer to "Flower". Use the Transform Tool to skew the layer into perspective. Move the flower in place. 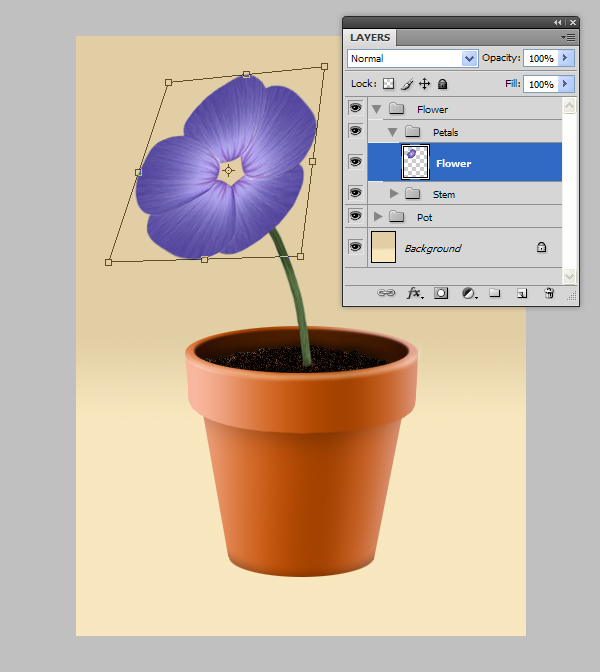 Use the Liquify Filter (Filter > Liquify) to distort the edge of the flower to give it a more organic feel. I've also painted in the backside of the flower where the petal may be lifted enough to expose it.

Use the Dodge and Burn Tools to add some shadows and highlights to this layer. The image below illustrates some of the areas I focused on. 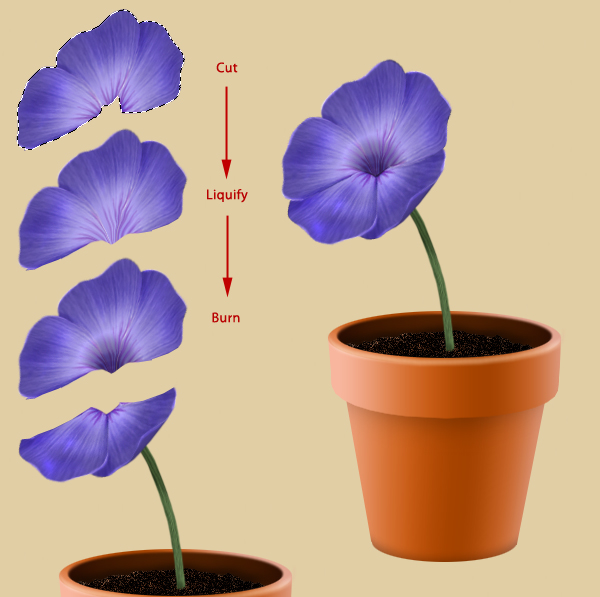 To create the stamen that goes in the center of the flower, we want to start by creating a new group called "Stamen." Inside the group, create a new layer and with a small, light yellow brush, draw in a few lines as shown. Use the Burn Tool to add shadows near its base. When you're done give it a Bevel and Emboss.

On a new layer, repeat that last step to add more stamen to give this more depth. Erase the bottoms of the Stamen to make them appear to go in to the flower.

To create the tips of the stamen (known as the Anther), create a new layer called "Anther" and paint in blobs of a light yellow color. 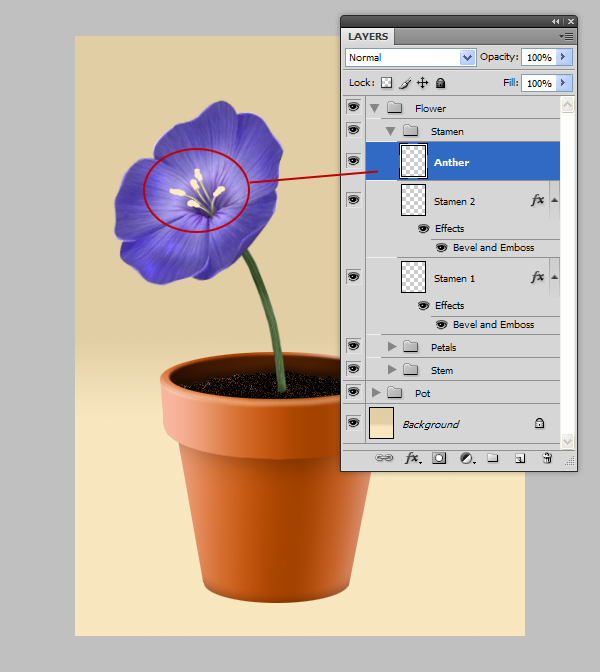 The last thing we will add is a leaf. Start by making a copy of the "Stem" group. Right Click the group and select "Merge Group". Place this layer below the original "Stem" group. Go to Edit > Transform > Flip Horizontal and then Scale and Warp this layer into position.

Next, create a New Group called "Leaf". On a new layer, create an inverted heart shape in green. Make a copy of this layer and use Levels (Command/Ctrl + L) to lighten this copy. 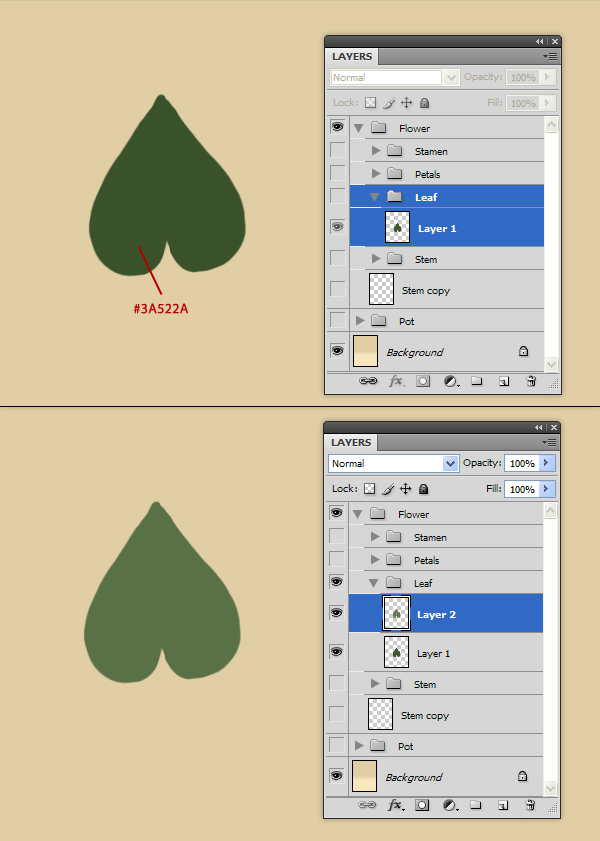 Use the Eraser Tool (E) on the copied layer to erase lines resembling the veins of a leaf (this will allow the darker leaf to show through). Open up the Layer Styles and add a Bevel and Emboss to this layer.

Merge both leaf layers together and Rotate and Scale (Command/Ctrl + T) it into position and rename the layer "Merged Leaf".

Use the Liquify Filter (Filter > Liquify) to manipulate the edges of the leaf, just like we did with the flower petals. 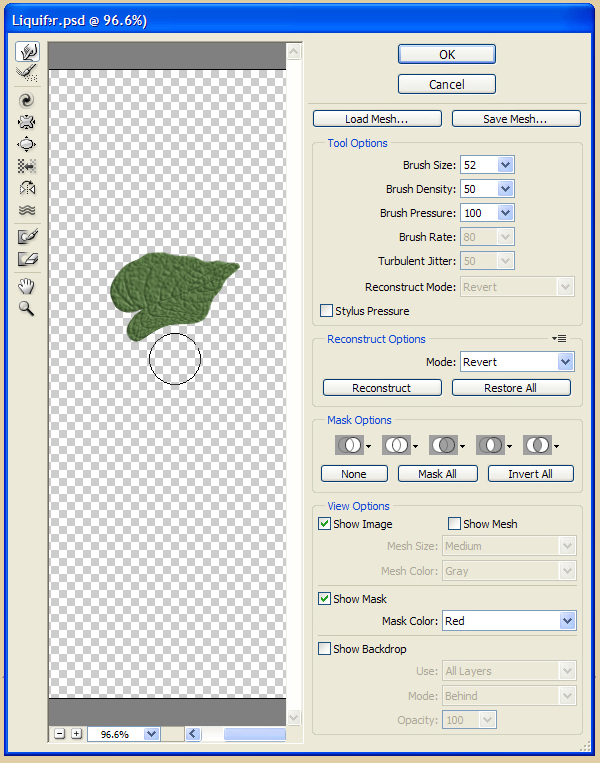 Use the Dodge and Burn Tools to add some more definition to the leaf. 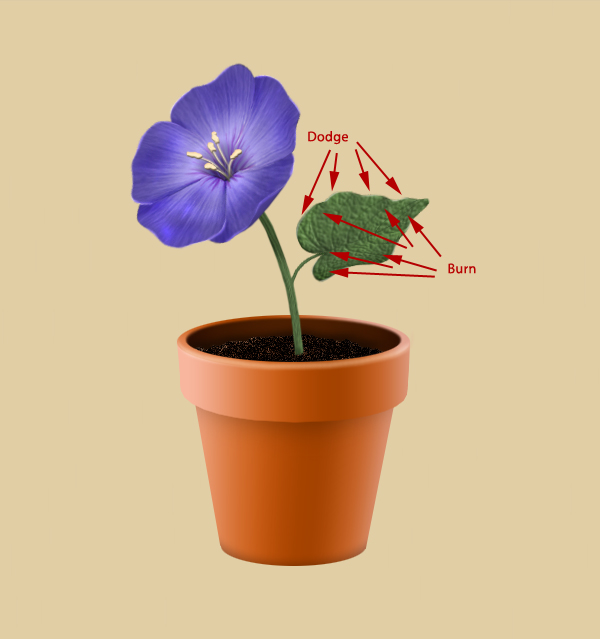 Copy a portion of the leaf and paste it to a new layer below the "Merged Leaf". Use this piece of the leaf to fill in any parts of the leaf that appear to curl up and expose the underside. If needed, use the Eraser Tool (E) to trim the shape.

To add some shine to the leaf, create a new clipping layer to the "Merged Leaf" layer and fill with white. Double click this layer to open the Layer Styles and adjust the Blend If sliders as shown. By moving the Blend If: Underlying Layer slider, you can control how hard and soft you want to blend the white layer over the leaf's light or dark values.

To finish up the leaf, use the Burn Tool to add some additional shadows to the leaf. 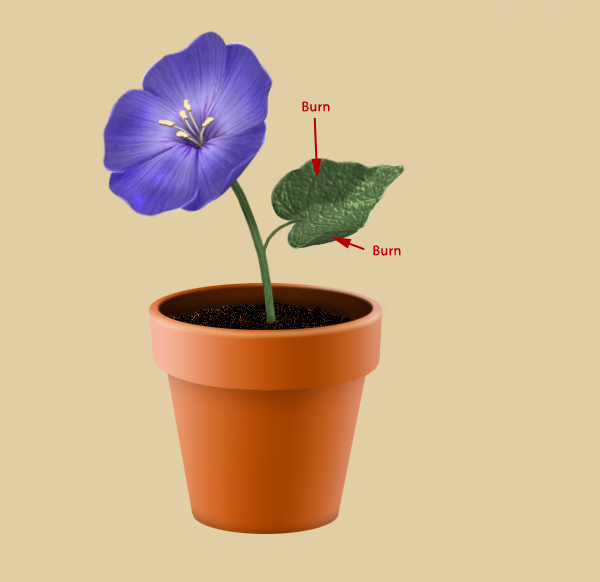 To complete the image, I added a shadow and reflection. To create the shadow, use the Ellipse Tool to make a black ellipse under the base of the pot, then use a combination of the Motion blur and Gaussian Blur filters to blur it. Adjust the shadow's Opacity. For the reflection, simply merge a copy of the pot into one layer and flip vertically. Reposition this layer and adjust its opacity for the illusion of a reflection. 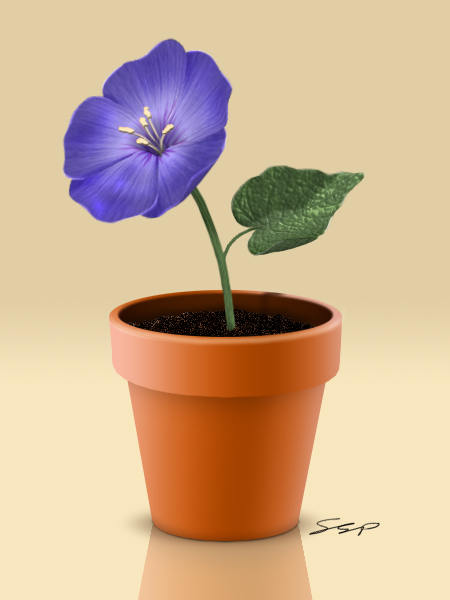 Stephen Petrany
Designer, Instructor, and Artist. @spetrany.
Weekly email summary
Subscribe below and we’ll send you a weekly email summary of all new Design & Illustration tutorials. Never miss out on learning about the next big thing.
Advertisement
Download Attachment
Translations