If you want to create a vector planetary space scene, then we have a fun tutorial for you. This tutorial is for the intermediate Illustrator users, but beginners should be able to make their way through it as well. We'll work with mapping art, vector 3D, and numerous Illustrator tools. Let's have some fun creating this graphic!

The National Aeronautical and Space Administration (NASA) has a wealth of free space related images. As I looked through some of these, I was inspired to create a space scene in Illustrator. I chose this photo below as a reference because I wanted to create my own colors and add some Illustrator effects. So let's get started! 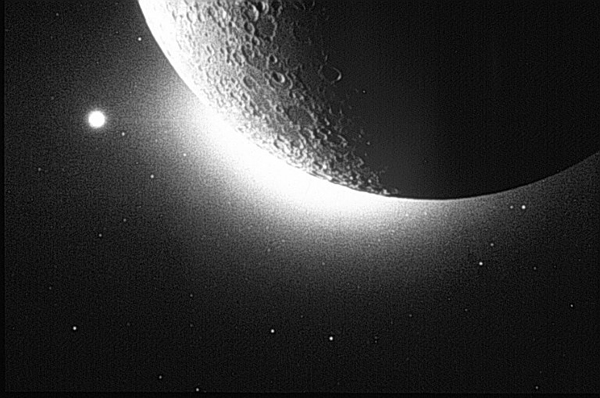 Choose the Star Tool and click once on the artboard. Enter the following numbers in the dialog box. You can experiment with these, but generally, you want the first Radius (number 1) to be half the size of Radius 2. Fill the star with a radial gradient going from white in the center to light blue. 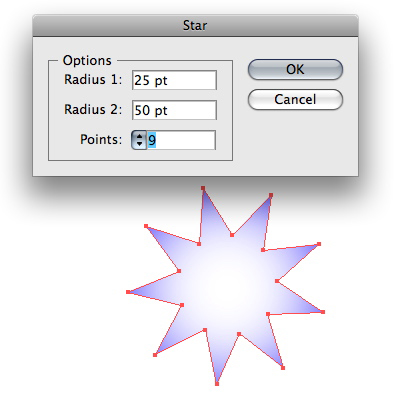 Drag the star into the Symbols panel to create a new symbol. Name it and choose Graphic as the type.

Double-click the Symbol Sprayer Tool to bring up its options. The Diameter setting specifies the brush size for the Sprayer (while using a Symbol Tool, press the left and right brackets to decrease or increase the diameter). Depending on how many stars you want in your galaxy, increase or decrease the Intensity and the Symbol Set Density.

Spray the star symbol on the background. I find it helps to deselect after each spray, so the result is many Symbol sets, as in the image below.

When you have as many stars as you like, choose the Symbol Sizer Tool. Hold down the Alt key to reduce the size of the symbols in a set. It may take a few tries to get the hang of it — try clicking directly on top of a star to size it. With so many Symbol Sets on the background, it may be hard to tell which ones you're resizing, so it's helpful to hide the each set after you're done adjusting it. Just remember to un-hide everything when you're finished.

Depending on how many star symbols you sprayed in Step 6, your illustration should look like one of the images below. 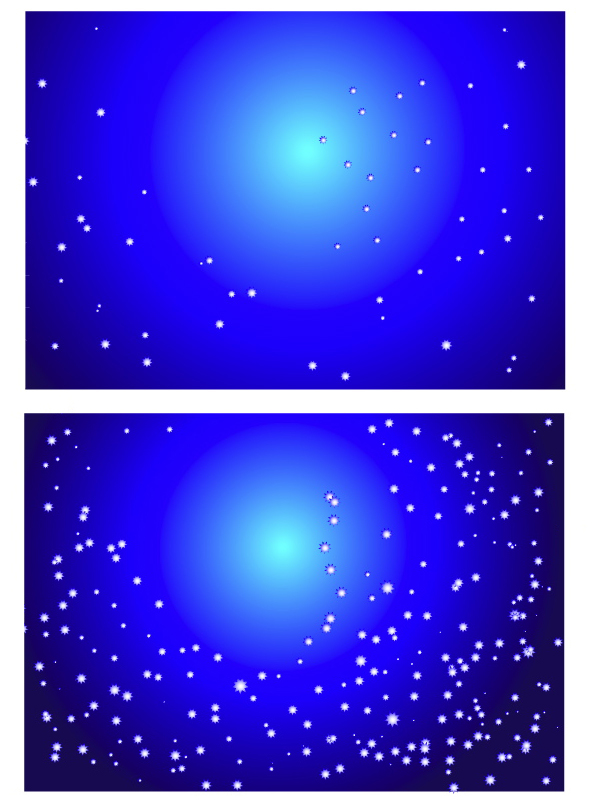 To add more stars and give a sense of depth to the scene, create a new symbol from a tiny white circle. As before, Spray the symbols on the background. The amount of stars is personal preference, but the illustration should look something like the image below. 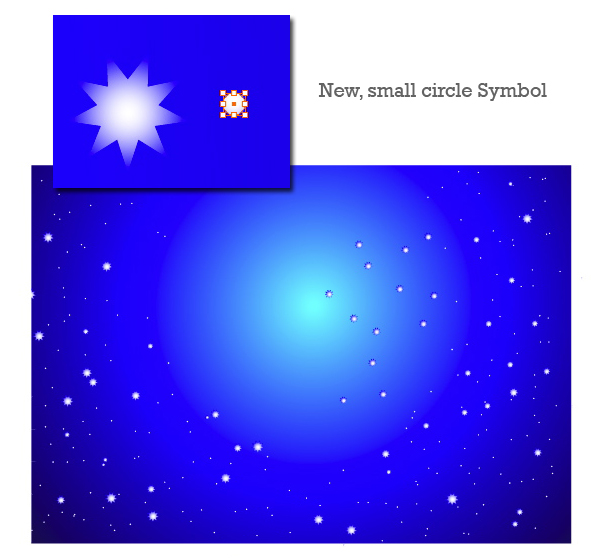 Lock the Background layer and create a new layer above it. Name this layer "Planet." With the Ellipse Tool chosen, hold down the Shift key and draw a perfect circle. Next, draw a line through the middle of the circle vertically. Center-align the circle and the line as shown.

Use the Pathfinder to cut the circle into halves. Delete the left half-circle. Fill the other half with a medium blue fill and a stroke of none. 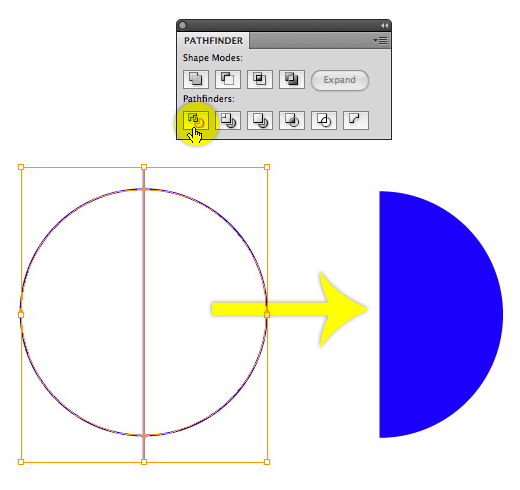 Select the half-circle and go to Effect > 3D > Revolve... Click the More Options button and tick the Preview box. The Revolve angle should be set to 360&deg. In the Surface section of the dialog box, select Diffuse Shading, set Light Intensity to 100%, set Ambient Light to 50% and input 50 Blend Steps. Move the spotlight (small white circle) to the lower-right in the thumbnail, so that the light appears to be coming from below. Depending on the color you've used for your planet, you may want to tweak these settings, but your sphere should look like the image below. 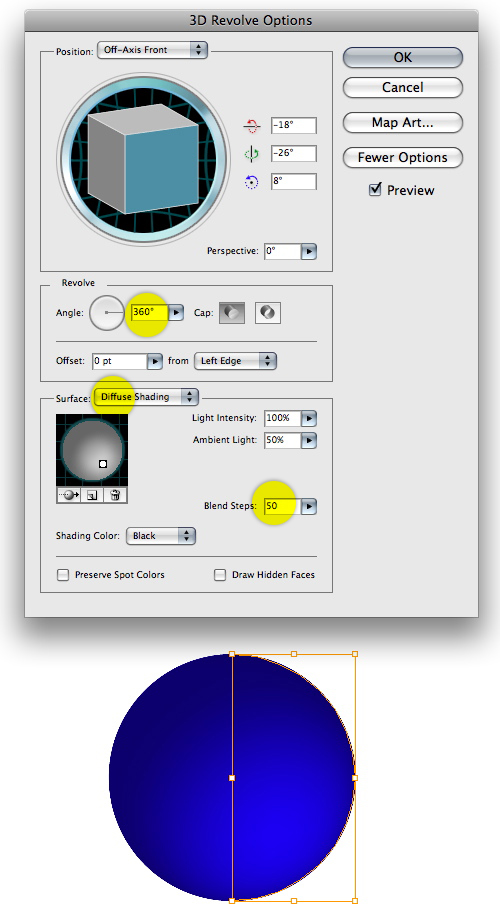 To give the planet some texture and dimension, we'll create some artwork, then map it to the 3D object. To make a moon crater, draw an ellipse and fill it with bright blue. Draw a smaller ellipse inside that one, and fill it with a darker blue group. Now make several copies of the crater and re-size them until you have a small cluster.

Drag the crater cluster into the Symbols panel to create a new symbol, just as you did in Step 3.

Select the 3D globe. In the Appearance panel you'll see The 3D Revolve effect listed. Click to bring up the 3D dialog again.

As before, tick the Preview checkbox. Click Map Art... The Map Art dialog will appear. You'll see a drop-down menu of symbols at the top-left. Click and scroll down to the crater cluster symbol you just created. Position the symbol in the white area of the grid (this is the surface that is visible).

You can transform the symbol by dragging out the handles. You can also rotate it. Make sure the Preview box is checked, and click OK once you're satisfied with the look of the craters on the planet's surface. For this illustration, the texture needs only to be applied to the bottom third of the planet, since the rest will be cropped later.

If you like, experiment using different shapes for the mapped symbol. Modify the transparency and blending mode to get the look you want.

Position the planet on top of the background, and scale if necessary.

Just a few more finishing touches and we're done. With the planet selected, go to Effect > Stylize > Outer Glow. Set the Blend Mode to Screen, the color to white, and the Opacity to 100%. Adjust the blur to your liking.

Draw an 80-point star with the Star Tool. Now go to Effect > Distort & Transform > Pucker & Bloat, and enter a negative Pucker value until the rays of the star double and get longer. Change the fill to white and the Opacity to 70%. Position the star behind the globe, so that it looks like a huge ray of light peeking out behind the planet. 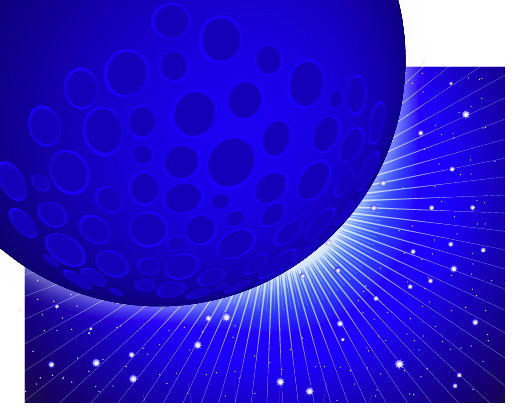 Choose the Flare Tool (it's underneath the Marquee Tool). And click once on the background. There are lots of options in the dialog box. Each section refers to a different part of the flare. Check Preview and experiment until you get one you like. Place it on the edge of the planet. 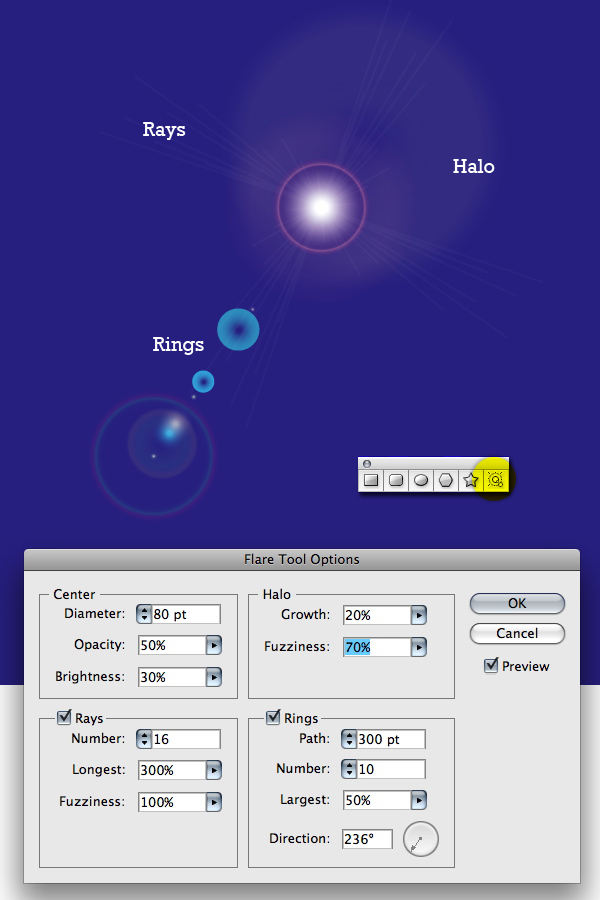 Draw a rectangle 10" x 7", or the same size as your background. Align it with the background, and place it on top of the planet. Select both, and go to Object > Clipping Mask > Make. This should mask off the outer edges of the planet, and you're done!