The first step is to browse stock sites or take photographs to gain a basis for the finished piece. After browsing, pick out a few images that have potential to turn into a manipulation. After doing so, create enough thumbnails to further establish the theme and composition of the piece. This are small rough sketches that allow you to explore concepts and layouts quickly. The first thumbnail out of the set below was chosen for further development. 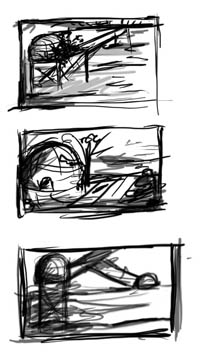 Now, open the the base image and set it to 300 pixels per inch.

Next, go to Image > Adjustments > Brightness/Contrast. Set the contrast to +55. Also, erase the unwanted elements of the photograph.

Now it’s time to add more elements into the picture. A glass dome is added to give the image a purpose. You don’t want an image that people are going to have to guess what they are looking at. The dome adds to the believability that people could live and work on this platform. When making concept art, believability is essential. 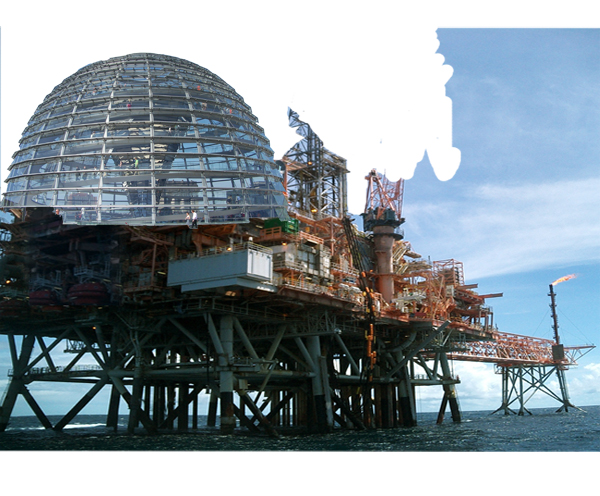 The perspective of the dome doesn't exactly match the perspective of the initial image. To fix this, go to Filter > Liquify and warp the image until it matches. Make sure to use a fairly large brush since the whole image is being edited and not just sections. Warping the dome gives the platform a futuristic and fantastic feel by giving it some unusual curves. 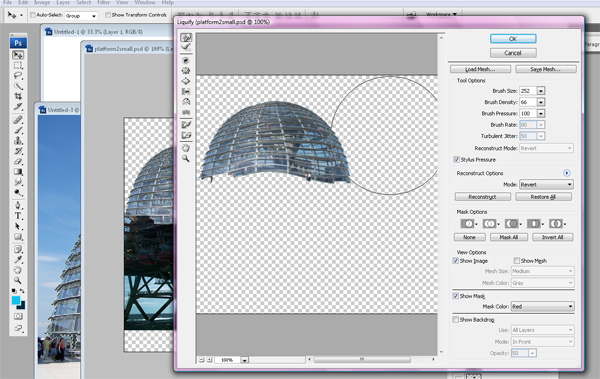 Next, clean up the bottom edges of the dome. Then paint a connecting border between the dome and platform to join the two. 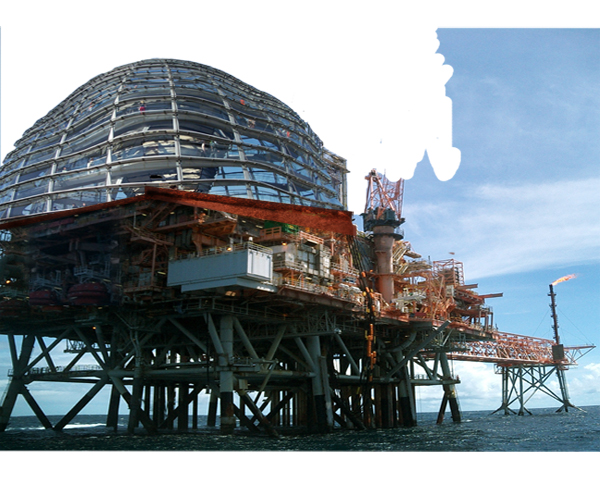 Next, cut out the image of a tree and paste it multiple times. After pasting the tree, erase the edges with a speckled brush to decrease repetition.

First, roughly paint in the area you erased with blue. You can work on blending that into to the image as you work through the tutorial. Next, create a new layer and start painting over the trees you just placed. The best type of brush to paint foliage with is a speckled brush.

When painting the leaves, start with darker values first and then build up to a highlight. You also want to remember the light source of the rest of the image. Making everything consistent leads to a believable finished illustration.

The next step is to create a plane for the runway. Start off with creating a random shape with the Lasso Tool (L).

Then select the Fill Tool (F) and fill in the shape with white. 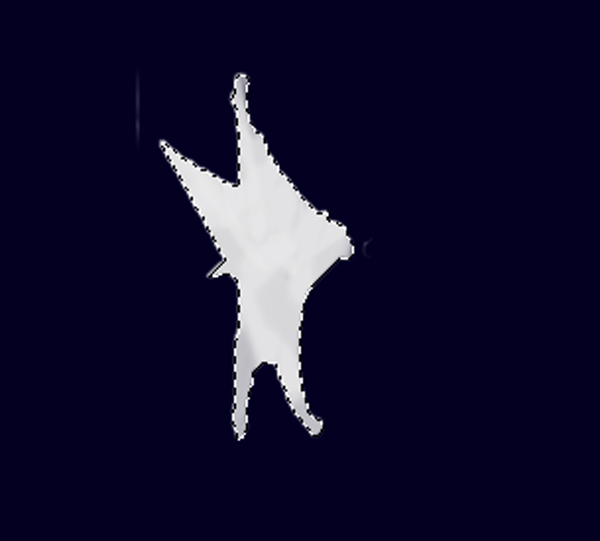 Then paint in the detailing and basic shading for the plane. 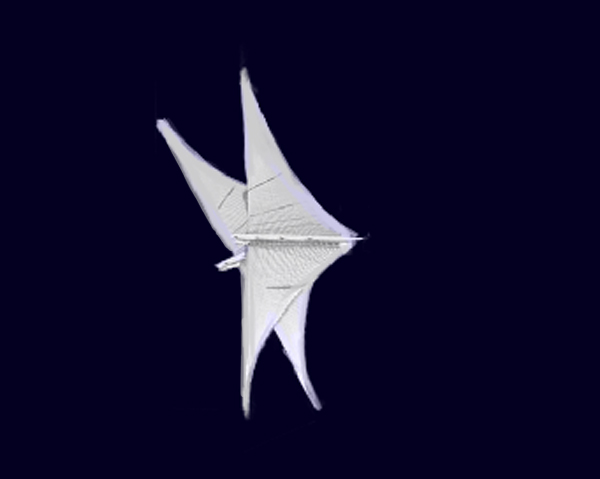 Next, place the plane into the environment. Erase the firing touch on the platform and replace it with a beacon light. Also, start adding in some brighter colors to your trees to add some visual interest. 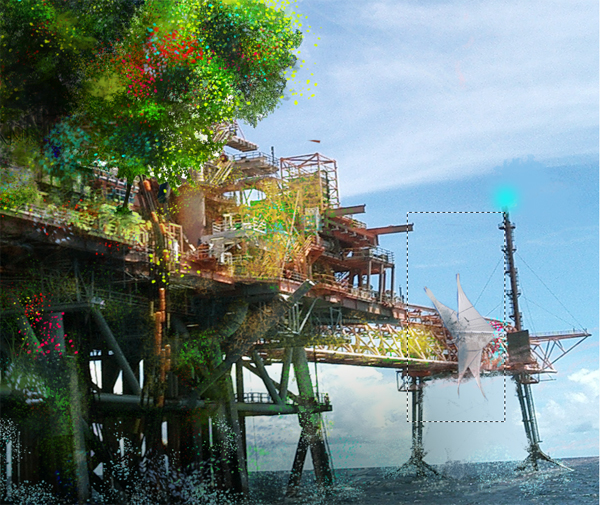 To give the image more depth it is a good technique to add structures behind the foreground image. Create a new layer and place the new dome below the main structure’s layer. Adding another dome reinforces the structure of the platform. Also, continue to work on the sky in the background.

Continue painting more leaves and details of the foliage. 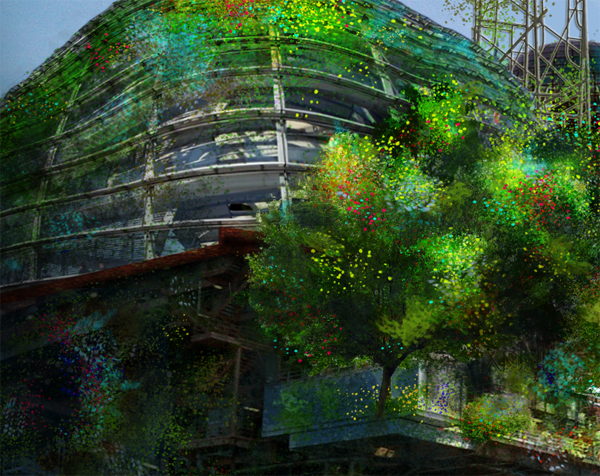 Next, create a new layer. Set the layer to multiply and select the color black. Paint the left side of the image to add a deep shadow. The Opacity of that layer should be 69%. Also, add a plane in flight to reinforce the purpose and use of the platform. 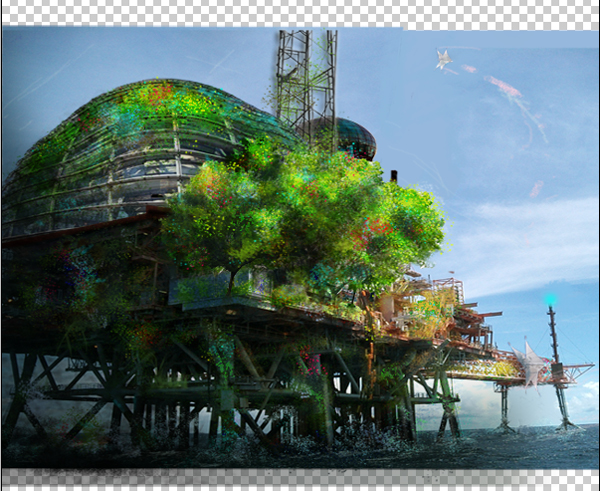 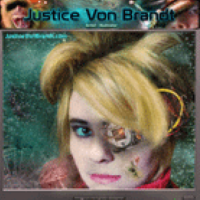