Web design can be deceptively difficult, as it involves achieving a design that is both usable and pleasing, delivers information and builds brand, is technically sound and visually coherent.

Add to this the fact that many Web designers (myself included) are self-taught, that Web design is still novel enough to be only a side subject in many design institutions, and that the medium changes as frequently as the underlying technology does.

So today I've put together my 9 principles for good Web design. These are only my opinions and I've tried to link off to more reading on subjects so you don't only hear my voice. Obviously, I have lots of disclaimers: rules are made to be broken, different types of design work differently, and I don't always live up to my own advice. So please read these as they are intended--just some observations I am sharing... 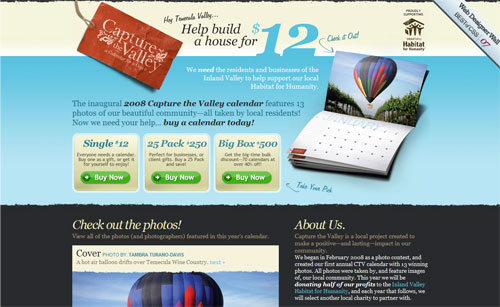 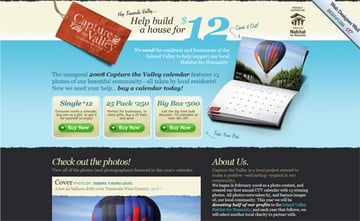 Capture the Valley uses bars of color to guide your eye through sections from top to bottom...

Good Web design, perhaps even more than other type of design, is about information. One of the biggest tools in your arsenal to do this is precedence. When navigating a good design, the user should be led around the screen by the designer. I call this precedence, and it's about how much visual weight different parts of your design have.

A simple example of precedence is that in most sites, the first thing you see is the logo. This is often because it’s large and set at what has been shown in studies to be the first place people look (the top left). his is a good thing since you probably want a user to immediately know what site they are viewing.

But precedence should go much further. You should direct the user’s eyes through a sequence of steps. For example, you might want your user to go from logo/brand to a primary positioning statement, next to a punchy image (to give the site personality), then to the main body text, with navigation and a sidebar taking a secondary position in the sequence.

What your user should be looking at is up to you, the Web designer, to figure out.

To achieve precedence you have many tools at your disposal:

You can read more of my thoughts on Precedence in an old Psdtuts+ post called Elements of Great Web Design - the polish. Joshua David McClurg-Genevese discusses principles of good web design and design at Digital-Web. Joshua also has the longest name ever :-) 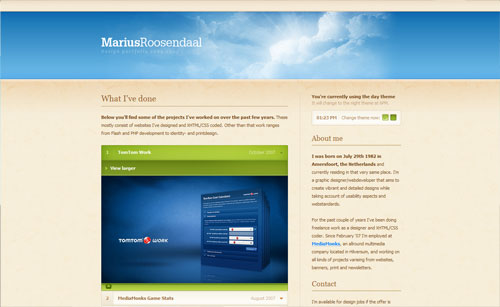 Marius has a very clean, very simple site with plenty of space

When I first started designing I wanted to fill every available space up with stuff. Empty space seemed wasteful. In fact the opposite is true.

Spacing makes things clearer. In Web design there are three aspects of space that you should be considering:

At WebDesignFromScratch there is a great article called the Web 2.0 how-to design guide, which discusses Simplicity - a concept that makes a lot of use of spacing. There's plenty of other useful stuff there too! 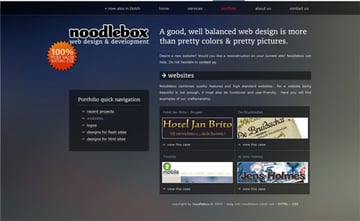 Noodlebox does a good job of using on/off states in their navigation to keep the user oriented.

One of the most frustrating experiences you can have on a Web site is being unable to figure out where to go or where you are. I'd like to think that for most Web designers, navigation is a concept we've managed to master, but I still find some pretty bad examples out there. There are two aspects of navigation to keep in mind:

Navigation — Where can you go?
There are a few commonsense rules to remember here. Buttons to travel around a site should be easy to find - towards the top of the page and easy to identify. They should look like navigation buttons and be well described. The text of a button should be pretty clear as to where it's taking you. Aside from the common sense, it's also important to make navigation usable. For example, if you have a rollover sub-menu, ensuring a person can get to the sub-menu items without losing the rollover is important. Similarly changing the color or image on rollover is excellent feedback for a user.

Orientation — Where are you now?
There are lots of ways you can orient a user so there is no excuse not to. In small sites, it might be just a matter of a big heading or a 'down' version of the appropriate button in your menu. In a larger site, you might make use of bread crumb trails, sub-headings and a site map for the truly lost.

SmashingMagazine has a selection of CSS-based navigation styles which are nice to go through, and #3 is one of mine! A List Apart also has a good article about orientation called Where Am I?

Life has gotten a lot easier since Web designers transitioned to CSS layouts, but even now it's still important to think about how you are going to build a site when you're still in Photoshop. Consider things like: 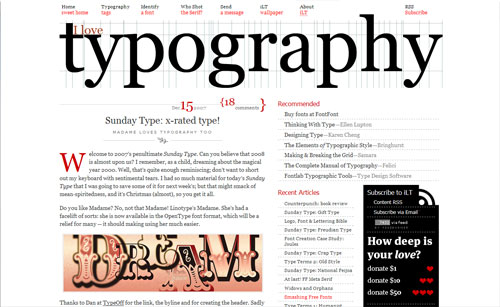 If anyone knows good type it's iLoveTypography!

Text is the most common element of design, so it's not surprising that a lot of thought has gone into it. It's important to consider things like:

Nick La at WebDesignerWall has a great article about online typography called Typographic Contrast and Flow . 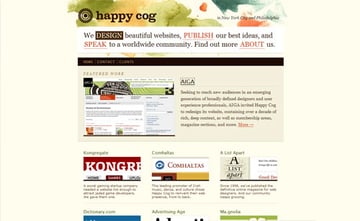 Happycog know usability inside out, and their own site is simple and easy to use.

Web design ain't just about pretty pictures. With so much information and interaction to be effected on a Web site, it's important that you, the designer, provide for it all. That means making your Web site design usable.

AListApart has lots of articles on web usability. 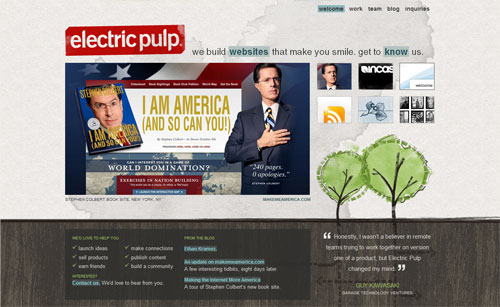 Electric pulp manages to look rough, but if you look closely you realize there is a firm grid and things actually all line up.

Keeping things lined up is as important in Web design as it is in print design. That's not to say that everything should be in a straight line, but rather that you should go through and try to keep things consistently placed on a page. Aligning makes your design more ordered and digestible, as well as making it seem more polished.

You may also wish to base your designs on a specific grid. I must admit I don't do this consciously - though obviously a site like Psdtuts+ does in fact have a very firm grid structure. This year I've seen a few really good articles on grid design including SmashingMagazine's Designing with Grid-Based Approach & A List Apart's Thinking Outside The Grid. In fact, if you're interested in grid design, you should definitely pay a visit to the aptly named DesignByGrid.com home to all things griddy.

The ExpressionEngine site is the soul of clarity. Everything is sharp and clean.

Keeping your design crisp and sharp is super important in Web design. And when it comes to clarity, it's all about the pixels.

In your CSS, everything will be pixel perfect so there's nothing to worry about, but in Photoshop it is not so. To achieve a sharp design you have to:

I wrote a bit more about clarity in Elements of Great Web Design - the polish. I've noticed that print designers transitioning to Web design, in particular, don't think in pixels, but it really is vital. 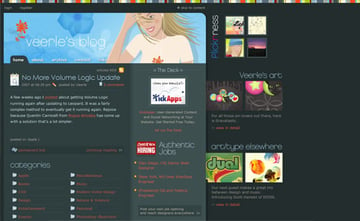 Veerle does a great job of keeping even the tiniest details consistent across the board.

Keeping your design consistent is about being professional. Inconsistencies in a design are like spelling mistakes in an essay. They just lower the perception of quality. Whatever your design looks like, keeping it consistent will always bring it up a notch. Even if it's a bad design, at least make it a consistent, bad design.

The simplest way to maintain consistency is to make early decisions and stick to them. With a really large site, however, things can change in the design process. When I designed FlashDen, for example, the process took months, and by the end some of my ideas for buttons and images had changed, so I had to go back and revise earlier pages to match later ones exactly.

Having a good set of CSS stylesheets can also go a long way to making a consistent design. Try to define core tags like <h1> and <p> in such a way as to make your defaults match properly and avoid having to remember specific class names all the time.

The ThinkVitamin article How CRAP is your design? discusses Repetition going down the page and how important it is. The article is written by Mike Rundle who designs 9rules, so you know it's worth reading!

Enjoyed this article? I've just completed a book on freelancing that you can purchase online as an eBook. Head over to find out more about How to Be a Rockstar Freelancer.

While the basic principles in this post remain valid, a lot has changed in web design since 2007. Check out our free new course on design systems to learn about the latest web design principles in 2020.

DesigningWeb DesignGraphic DesignAdobe Photoshop
Did you find this post useful?
Yes No
Would you like to provide feedback (optional)?
Cancel Submit
Want a weekly email summary?
Subscribe below and we’ll send you a weekly email summary of all new Design & Illustration tutorials. Never miss out on learning about the next big thing.
Sign up