Let's take a look at some digital illustration techniques that you can use in your artwork. Try analyzing artist's work to discover not only how they do something, but also why they might use a certain technique. Pick a vantage point and look at the work from that particular view. In this article, we have an analytical lens we'll be looking through. We'll consider the use of repeating shapes and flexible patterns being used by artists today.

We often think of patterns in the sense of rigid repeating designs, as we see on wallpaper, or in textiles. Usually, we consider using patterns in our work as elements that would compose our background. There are more ways to consider the use of patterns in your work, though.

Patterns can be thought of in an organic sense. They don't have to be so rigid. They can have variation of size, spacial arrangement, or shape, while still being interpreted as patterns. The glue that holds it together is a combination of repetition and shape. Often, it's a repeating set of shapes that make up a pattern.

You can use these sets of shapes in various ways throughout your work. Consider cutting into your work through the use of repeating shapes, like cutting the spots off a Dalmatian. Possibly reposition these cutouts in different areas of your design. You can build up images through the use of patterns, mask areas through camouflage, and various other techniques to form interesting digital artwork that either uses flexible patterns or creates them.

1. Remove Parts of an Image with Repeating Shapes

Repeating shapes make up patterns. There are interesting ways to use these repeating shapes. One such way is to cut into a photo, text, or design element. Then reposition those cut pieces throughout the illustration. In the artwork below the artist uses small rectangles, slanted at 45 degree angles, to cut into the text in the design. The elements are then repositioned to form an interesting digital composition.

The shapes in the image below don't actually cut the photo. The use of white and red triangles confuses the foreground and background as the shapes cross over the model in the photo. The visual effect appears to remove parts of the photo image, and the elements are effectively mixed.

2. Break Apart An Image Across the Seam of a Pattern

In this technique, the central design element is given a pattern, a repeating shape that forms the central image. There is a seam formed where each shape intersects. Then the artist breaks apart this pattern across the seam. The effect can be powerful and cool.

Cristiano uses the program Poser to create a 3D model. In the process of output, he emphasizes the 3D shapes that compose the image, thereby forming a pattern. Then in Photoshop he breaks off parts of the pattern by cutting them out and repositioning them. He cuts them across the seam of intersecting shapes. While this is a bit of guesswork as to his actual workflow, he does use these two programs to make this image.

In the image below, Adobe has created a castle design by using the repeating shape of playing cards. The illustration purposefully unravels in parts of the image by pulling out some of the cards. It gives it a feeling of a house of cards toppling. 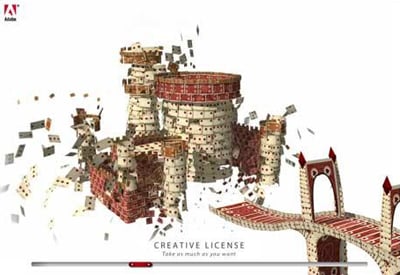 3. Build an Image Through Repeating Shapes 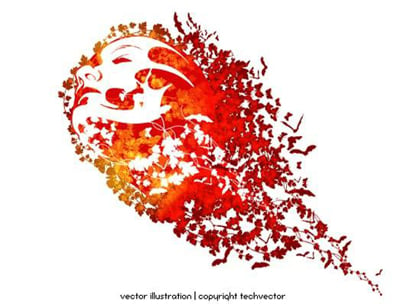 Stippling is a classic art technique, though you can emulate this style with multiple circles in Photoshop or other software. The image below uses multiple repeating circles and some lines to compose the image. The circles are large enough that they become a recognizable pattern used to build this image.

4. Break Shapes and Patterns Out of Established Boundaries

A classic design technique is to create a rhythm and then break that rhythm. It puts emphasis on the visual change. This can be done across planes established in the work. In the image below the pattern making up the shoe design is breaking out of the boundaries of the shoe. The shoe appears to come unraveled. You can create a visual rhythm with repeating shapes, and then break the boundaries of this established rhythm. 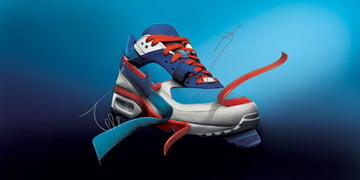 Something similar is being done in the illustration below. The design of the dragon as a tattoo escapes its skin boundaries and becomes real. What starts off as a cool pattern etched into the characters skin is transformed into a character itself.

5. Use Camouflage Techniques to Blend Areas 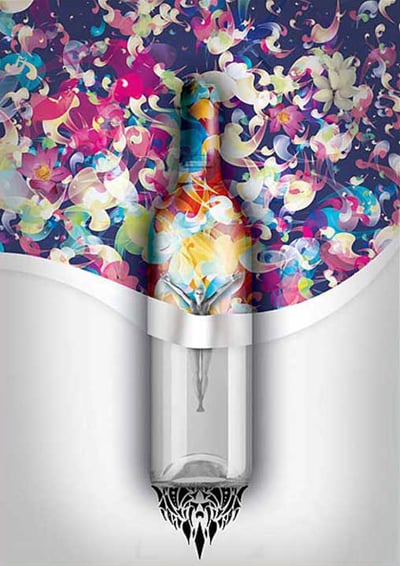 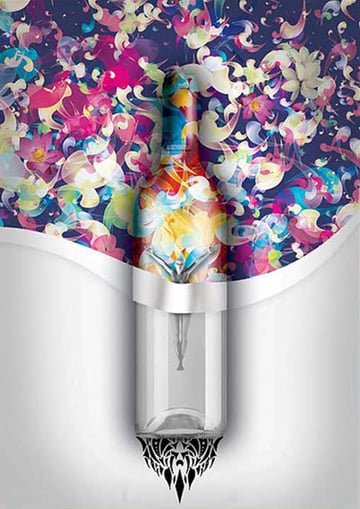 The hand in this image has the same texture as the background. The hand blends into the background texture in areas as camouflage. In other areas of the image, the texture doesn't line up as well, and the shading on the hand is stronger. In those areas, it stands out more.

Patterns are made up of repeating shapes. You can construct rigid patterns that repeat in a symmetrical fashion. Another option is to create more organic, flexible patterns. Shapes repeat, but there isn't a uniform sequence to the pattern.

The pattern below repeats images of cards, dice, and chips. There is a vast amount of flexibility in this pattern. Each shape is scaled in size throughout the pattern. The color of these repeating elements varies. Interestingly, three-dimensional rotation of each object changes throughout the design as it repeats. The design takes on an organic collage feel. The biggest dice elements form the focal point in the image. A loosely structured pattern is formed in this design. 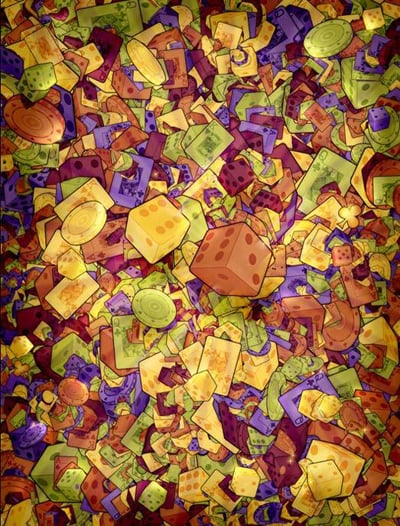 Notice the pixelated shapes in the image below . Each of them varies in construction. They are put together into different
Lego-like flat constructions. The size of these shapes varies. Their placement throughout the design is done in a collage fashion based on the artists eye. Notice how they appear to be on different planes throughout the image. There are numerous repeating shapes that form flexible patterns throughout this illustration. Notice the repeating circles constructed of diagonal lines.

Illustrations Mixing More than One of these Technique

It's certainly possible to utilize more than one of these techniques in your digital work together. The examples below are using both subtractive and additive use of shapes to compose the image. They use repeating shapes to cut into or break apart an image. They also use similar shapes to build up and construct the image. This occurs simultaneously.

In the image below (from the Psdtuts+ Flickr Group) notice how the repeating circle shapes replace areas of the photo. Most of the original image is reconstructed with the circular shapes. The shapes build up the image and overflow outside the boundaries of the original model. They also blend into the background. This is an excellent use of a repeating shape to compose an image.

The name of the piece "The Collector," feels fitting, as each of those circle shapes could form part of the collection. Possibly a collection of souls, knowledge, or something else. The artist leaves it for us to interpret. 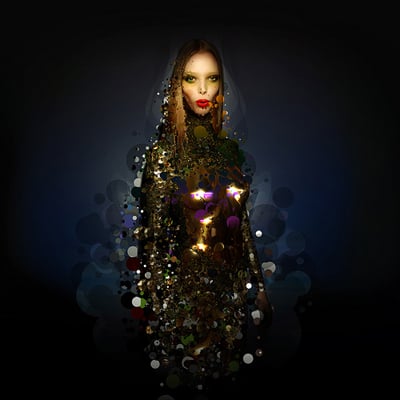 The image below is of Alberto Sevenso's work. We've done a tutorial here before showing how to create this style of artwork. The shapes below replace areas of the original model photo. They escape the boundaries defined by the model and build up layers of the image. The artist has many of these pieces in his collection of artwork. 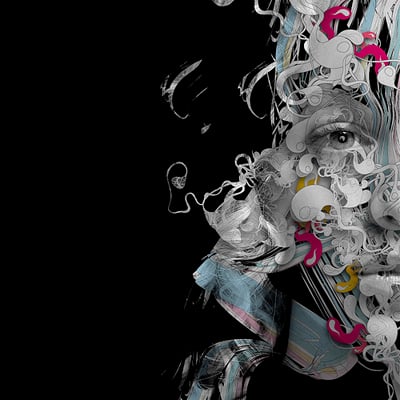 In the image below the repeating triangular shapes break apart the image—much like shattered glass. The shards then reform the image. The cut-out model and the repeating shapes are unified. We interviewed this artist not long ago here on Psdtuts+. Maciej Hajnrich AKA Valp Nietylko has used triangles to cut up and reform his images in other pieces as well.

Repeating shapes and patterns can be used in interesting ways in your work. Try breaking apart images with repeating shapes and patterns. Work on building up images with repeating shapes, or create flexible patterns to use in your images. Try experimenting with each of the techniques presented in this article. After you've played with these techniques and understand how to use them, try planning a digital art piece. Carefully consider how you will use one or more of these techniques before you get into Photoshop. This will take your work to the next level.

DrawingAdobe Photoshop
Did you find this post useful?
Yes No
Would you like to provide feedback (optional)?
Cancel Submit
Want a weekly email summary?
Subscribe below and we’ll send you a weekly email summary of all new Design & Illustration tutorials. Never miss out on learning about the next big thing.
Sign up