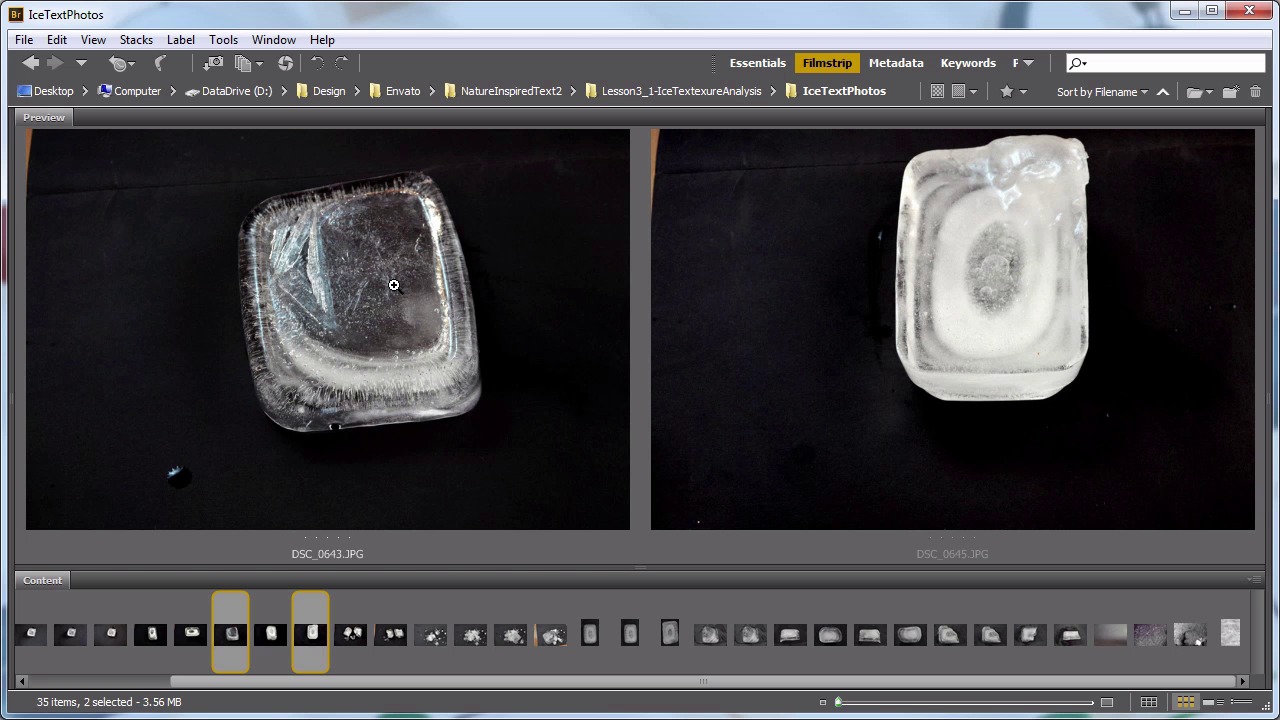 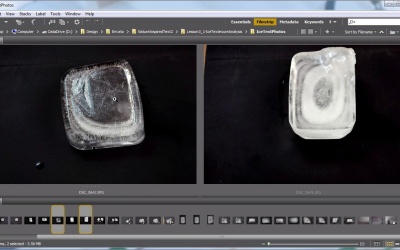 Before we start trying to create a frozen effect, let’s take a look at some photos of real life ice and see what we can learn by way of observation.

Hello everybody, Kirk Nelson here. Welcome back to Nature Inspired Text Effects. Were starting out on chapter number 3 which is the iced text effect. This is lesson 3.1 where we take a close look at ice textures. In preparation for this lesson, I took a bunch of containers and filled them with water and stuck them in my freezer overnight, and the next day I popped out the ice and put it on a black piece of paper, so I could take some good photographs. Those photos are available for you in the course files for this lesson. And those are the ones that I'm going to be addressing in this specific lesson. And we'll talk about some observations that I see with these ice blocks and the behaviors and properties of this ice. The first thing that pops out to me, is the dice actually is not blue. Now we often see it depicted as blue in a lot of fictional elements, simply because blue is one of the coldest colors in our regular color spectrum. And so we would associate it with something that's cold, hence, ice. But in it's natural state it is actually a white and gray color which looks a little bland. So, admittedly if you add some blue to it not only does it appear colder to our idealized versions, but it also is more interesting. That also bring us the discussion between idealism and realism. Now in creating digital artwork we want to strike a good balance there. We want to develop works that look realistic or at least believable, but venture well into the idealized territory to make them more captivating and intriguing visually. As I started analyzing these photographs, there's several properties that really occurred to me. The first of which was that this cloudy inside does tend to follow the actual shape of the container. Now, it's not surprising that the ice cube itself is the same shape as the container it was in, because of course it would be. But I guess I never really thought about how these cloudy areas, these brighter whitish areas would also mimic the shape of the container they're in, but that absolutely seems to be the case. It was also apparent to me as I sat these cubes underneath my photography lights, which then started to immediately make them begin to melt, is that the more frozen these ice cubes are, the more opaque they are, and as they begin to melt and return more to a watery state, they become more transparent. And that, essentially, visually indicates a type of coldness to them. So the more solid the lines are, the more cloudy the texture within the ice, the colder it appears. Even looking as a comparison between these two, one looks significantly colder than the other one, although they're both ice. So I'm suspecting they're not actually any difference in temperature but visually, this does look like it'd be a more solidly frozen and colder element than this one does. Now it's true that had I used distilled water to make my ice cubes, they all would have came out much cleaner and clearer than the ice that I have here. But since I used regular tap water, I end up getting these very cloudy cubes. That's okay because I think this is what we kinda expect to see when we think of ice cubes. Another significant property that I noticed of ice is the presence of air bubbles. If we look closer at one of these, we can see where these bubbles of air were actually frozen inside the cube, they were captured in there. And they could not get out, so they're stuck in there. And it's a very prominent, visual element of these ice cubes. Again, had this been distilled water, you would not see these. But any other naturally occurring water will have some frozen air bubbles caught inside of them. One of the things that's very interesting about these ice textures that we've captured, is that if we use a levels adjustment and we slide this dark slider over, it can adjust what appears to be the depth of the freeze of the ice. We mentioned before about how it appears to be warmer or less frozen the clearer and more transparent it is. By using the Levels adjustment, we can almost control how transparent it appears to be. Likewise, slide other one and it appears more opaque, although the highlights get very blown out in that sense. When ice is broken, it doesn't break cleanly. It tends to fracture along almost crystalline type of lines and gives a very irregular edge and a shatter type of appearance. This is because of the way that ice forms from the water molecules. It creates these fissures, or cracks, that the breaks will happen around. That's also why snow tends to have that same type of appearance, that irregular, almost tiny, sharpened edges to it. It doesn't look very smooth or soft, although if you touch it you would know that it's rather soft. But there's no rounded, soft edges to it. It's very angular and every irregular. In fact, if you look at the way frost forms, you see much that same type of pattern, as well. So in this library of photos, there's several different types of textures that we can use. These are free for you to use, I encourage you to explore them, study them closely, investigate them to see how you can use them in your own works. And that wraps up lesson 3.1 on the Ice Texture Analysis. Next lesson, Lesson 3.2, we start generating our own ice textures to use as a background.