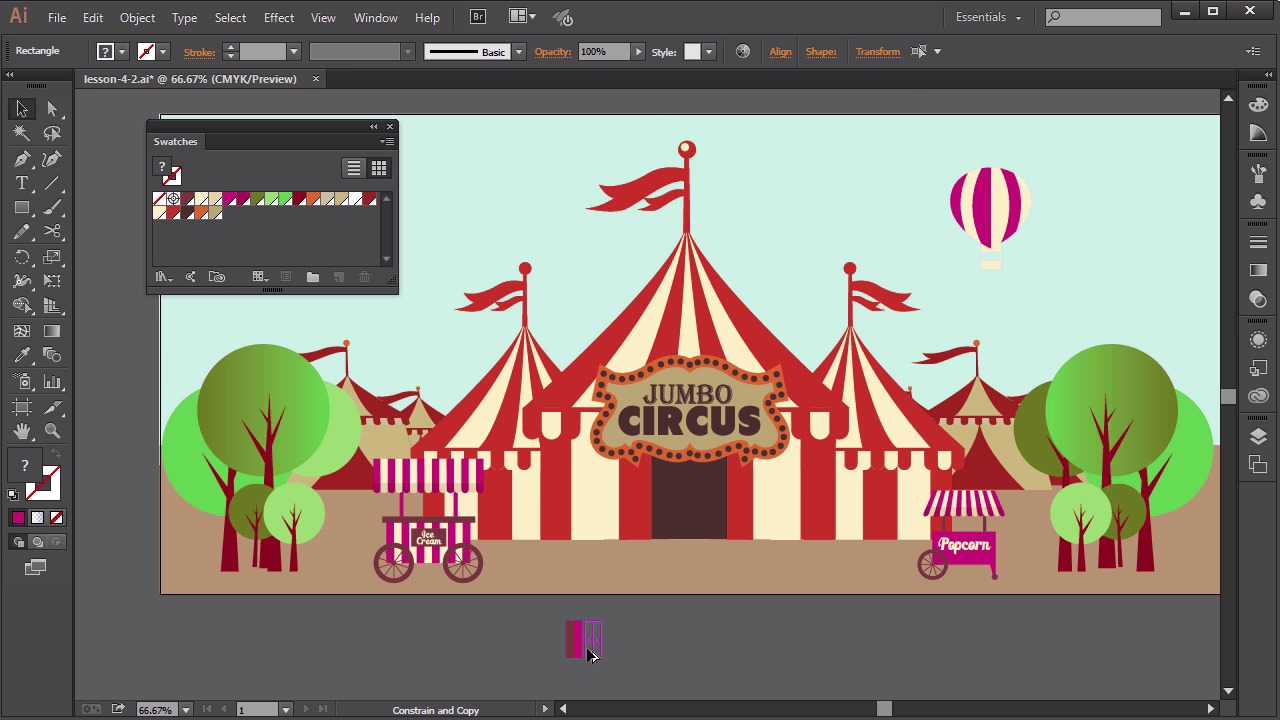 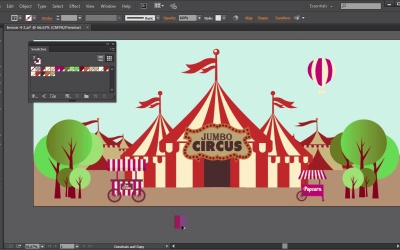 In the previous lesson we learned about Swatch Groups, and now in this lesson we will be learning how to replace and merge swatches in our Swatches panel and how to consolidate colors.

Hi, my name is Simona and welcome to Tuts+. You are watching the course Mastering Color in Adobe Illustrator CC and this is lesson Replace and Merge. In this lesson, we will be learning how to replace and merge swatches in our Swatches panel and how to consolidate colors. So let's get started. Let's open up Adobe Illustrator CC and the source file called lesson 4.2 in your source file folder. Now let's have a look of what we have here. As you might remember from the previous lesson, we created swatch groups and converted our processed colors into global colors. Here we can see the trees, then the back tents, the big tents in the front here and the marquee sign and the tent entrance. Last but not least, here we can see the ice cream cart, the popcorn cart and a hot air balloon. Now, I use the colors from the file from the last lesson and as you can see, those colors don't really work with the rest of the scene. Now we know we use global colors, and global colors have relationships with the shapes so it would easy to change the color to other values of the red and beige colors. But we still would have to select and then change and move the sliders around. You might think it's not such a big deal. We can use the select similar object tool and then replace the color with the one we want, but I have a much better idea. We can a replace a color swatch with another. Let me show you how we can go about this. So, if you find out which colors apply to the ice cream cart here, which is this one over there and then we go and find out which one we need to replace it with. That would be this one from the tent here, the red one. We then can select the red color swatch and then we press the Alt key or Option key on the Mac and then drag the red swatch over to the pink one that we want to have replaced. You can see how the swatch is highlighted with the dark border and we can also see a plus sign. Now when we let go, watch what happens to the pink shapes. All replaced with the red color swatch. Now, is this cool or what? This also works for patterns. Let me undo the last thing. Let me show you quickly what I mean with patterns. So let me create a quick and dirty pattern of stripes. One filled with the darker brown and one filled with the pinkish color, then I'll drag into the swatches panel and fill the popcorn cart with it. Now when we replace the pink swatch color with the red one, just like we did before. So, I will select a red, then press Alt or Option key on the Mac and then drag the swatch onto the one I want to replace. The pattern gets updated as well as the shapes fill with the pink swatch colors. Now, although we replaced the color pink with red in all of our shapes that were filled or updated. But at the same time, we lost the pink swatch and we have now a duplicate of the red one. This is not ideal, since we might get confused or just clutter up the swatches panel. So let me show you another way of replacing color swatches without duplicating them. So let's select the swatch we want to keep and then we press Ctrl or Cmd on the Mac and select the swatch we want to replace. Now with both swatches selected, we will go to the fly out menu and select Merge Swatches. This will get rid of the old one and merge it with the new one. So, in the end, we won't have two swatches of the same color in our swatches panel. One thing though, this Merge Swatches works only in global or spot colors not on process colors. Now the Merge Swatches application comes in handy when we need to merge an older color with a new one or even when we need to replace a global color with a Pantone color. Since Pantone colors are global colors by default, we can, for example, open up the Pantone Metallic Code panel from the Swatches library and then select an orange metal Pantone, for example. Now when we select a Pantone and then with the Ctrl or the Cmd key on the Mac pressed, we select the orange of the marquee sign and then select Merge Swatches. The color will be merged or so to speak, replaced. And now we have a metallic Pantone color for our marquee sign. And now, we are at the end of our lesson. It is very helpful to replace or Merge Swatches, especially when you have tons of objects or shapes with a color that needs to be replaced. The merge Swatches function can be a bit confusing first, but all we need to remember is that we need to click the color that we want to keep first and then the color we want to replace. That way, we will make sure that the new color is merged with the old. But let's move on to the next lesson and learn how we can add our own custom libraries.

Simona Pfreundner
My name is Simona Pfreundner, and I’m an independent graphic designer based in Montreal, Canada. I am a very creative woman with a big love for illustration, speak three languages, and solve problems with visual solutions in a colorful way.
Course source files