I would like to dedicate this tutorial to typography, which are the methods of processing printed text for better legibility and beauty. Typography is composed through the graphic design of printed text using the specifics for that languages rules. In this Basix tutorial will be apply the typography methods and rules using Adobe Illustrator. Materials for creating this tutorial were kindly furnished by Roman Kuznecov, aka Asat, who has many years of publishing experience.

Let's take a look at the designing of the printed text in the example of the sandwich recipe that we're working with today. This kind of text contains a variety of items that will help you to develop the theme of this work. For the experiments, you should use text like this one here. 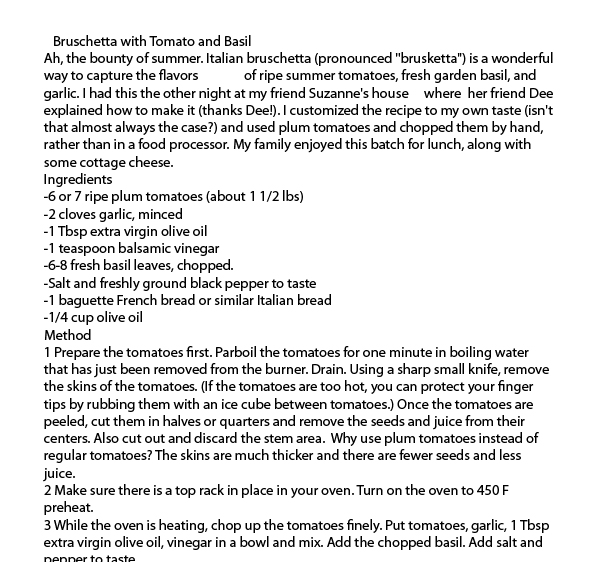 Choosing these typographic parameters depends on many factors, in particular: on the format of the publication, style of the text, designer's personal preferences, etc. I will leave these issues outside of the scope of this tutorial, as it covers books and monographs. Based on personal taste, I decided that the block of text will have a size of 150 by 300 mm (Type > Area Type ...) 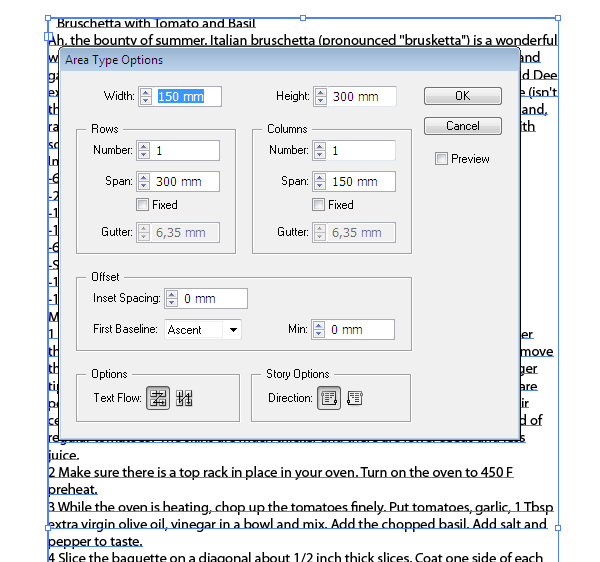 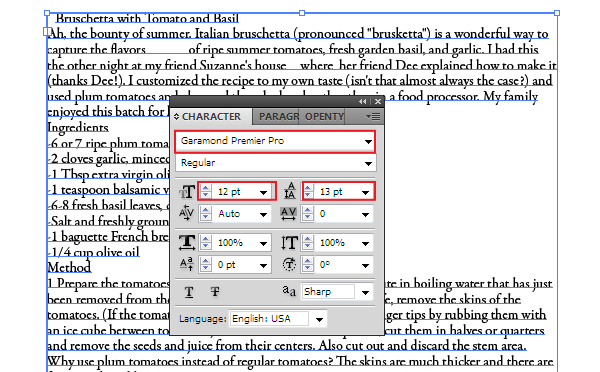 For your information: the font size is the size of the height of the letter; typographic point is the unit of measure of the font size. 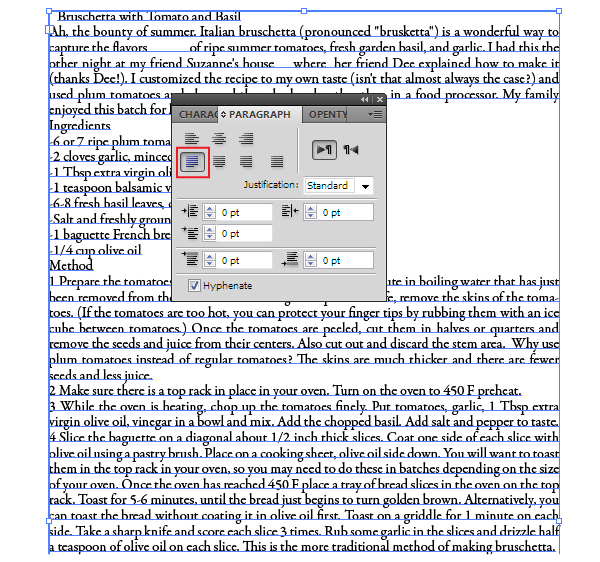 Next, we must configure the hyphenations. It is important to keep a balance between the number of hyphenations in the block of text and the amount of empty spacing in the rows. On one hand a lot of hyphenations create a feeling of the "fence" and affect the readability of text, on the other hand, long gaps also make it difficult to read.

Adobe Illustrator allows you to adjust this balance yourself with a Hyphenation dialogue window which opens from the fly-out menu of the Paragraph palette. Moving the slider to the better spacing position, we reduce the length of the gaps by increasing the amount of hyphenations, and vice versa. You must choose an optimal value that satisfies the design. 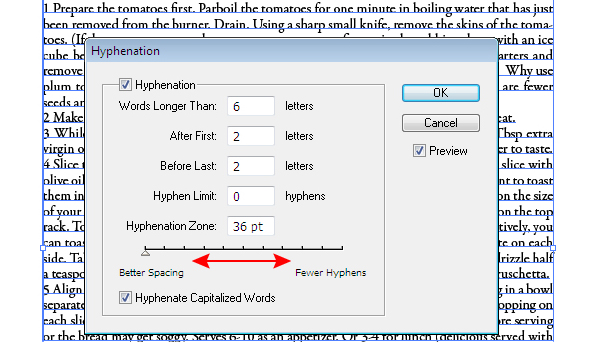 Thus, the general composition layout is already determined. Now let's proceed to designing the individual elements of the text. I decided to highlight the main title of the text, so I'll write it in capital letters. To do this, I've highlighted the title and in the fly-out menu of the Character palette I chose the option All Caps. 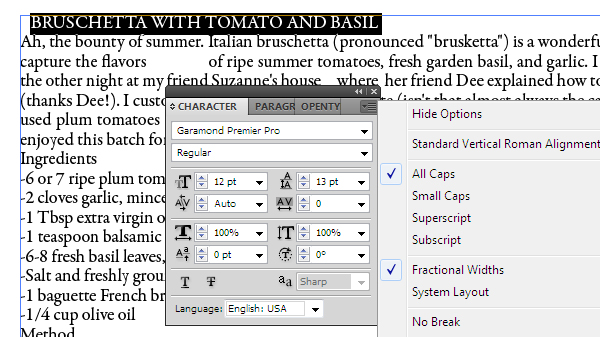 Here you need to pay attention to one point of interest: when designing the font tracking between the capitals is chosen on the basis that next to it there will necessarily be a lower case letter, so if you type the text in capital letters alone, the text feels cramped. Graphic designers recommend expanding slightly the letters of such text. With the text selected, in the Character palette in the tracking field set the value to 20. 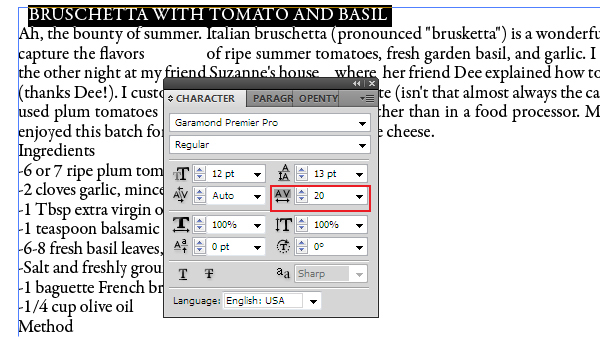 Now apply Kerning. Kerning is the process of adjusting the spacing between the character pairs to improve the appearance and readability of the text, it serves to justify the distance between adjacent letters or other font characters.

This option involves working individually with each character pair and how to find their relative position depending on the selected font, drawing letters themselves, and so on. The value of kerning is set in a percentage of the width of the space of the font being used, it can be either positive (when the characters are spaced apart) or negative (when the characters come closer to each other).

It is easy to see that the distance between pairs. See how "AV" and "WA" look different, but formally it is the same.

In order to make the distance between any two characters look visually the same, Kerning is applied. In Adobe Illustrator, there are 3 types of kerning: 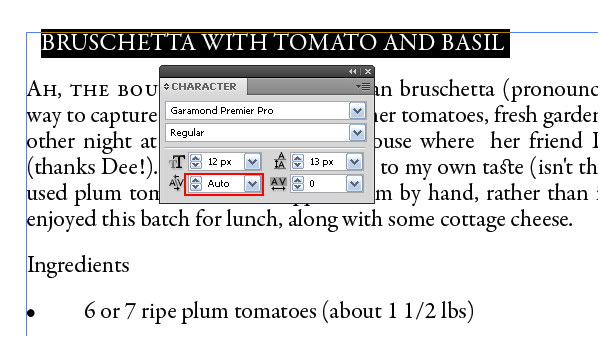 It is not recommended to use small caps in long (more than two or three words) phrases and sentences; it impairs the readability of text. So, select the first few words after the title and select Small Caps in the fly-out menu of the Character palette. 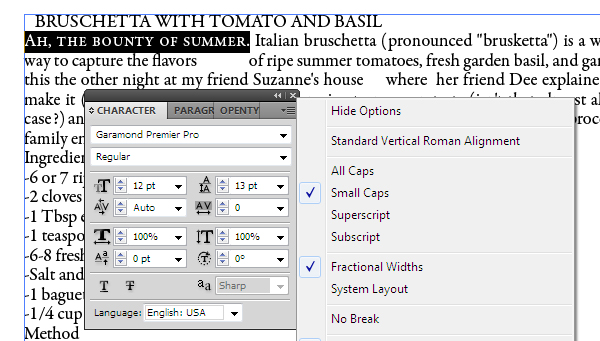 Now we need to separate paragraphs visually. This separation can be done in many ways, the most common of which are: break line (indent at the beginning of the first line of a paragraph) and the spacing between paragraphs.

In this text, I decided to make a space between paragraphs, but not just by line spacing, but by setting a blank space after each paragraph. To do this, in the Paragraph palette set the Space after paragraph value equal to 10pt. 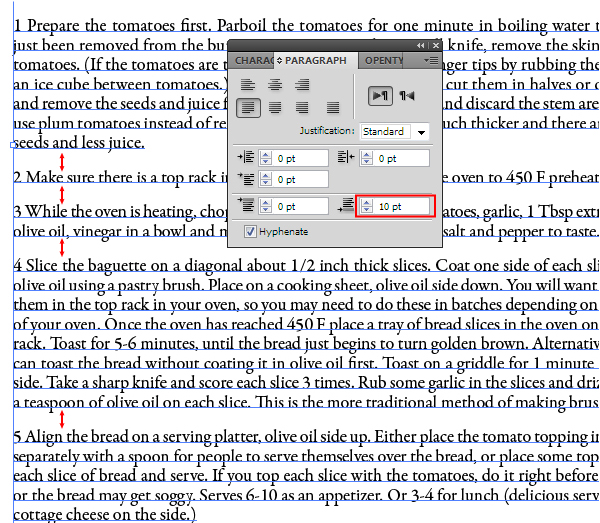 And now I want to talk about some ways to work with numbers in the text. There are 2 kinds of numerals: text numerals and all caps numerals. It is considered good form to use the first one along with lowercase letters, and the second one - with uppercase letters.

How to key in such numerals? There is one secret: both sets of numerals should be present in the font. The presence of two sets of numerals is one of the hallmarks of a good font. If these numerals are in the font, then key them in using the Glyphs palette (Type > Glyphs), find the necessary character in the table and Double-click to insert it in an active text block. 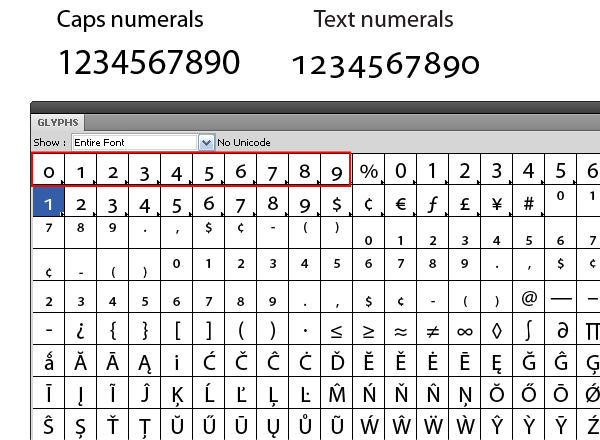 Our text has two groups of numerals. In the first case the numerals are in the ingredients section - leave them unchanged, I mean all caps numerals. The second group of digits are Fahrenheit temperature figures and the temperature character is in the main text. With the help of the Glyphs palette make them lowercase. 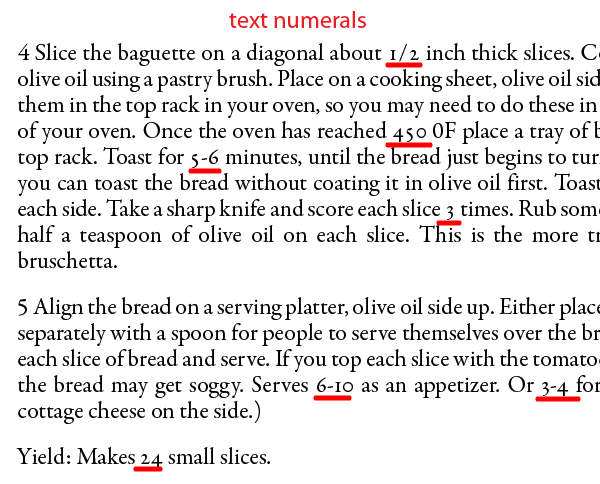 Our text there has a bulleted list of several items. Replace the hyphen at the beginning of the list on the bullet with the help of Glyphs palette. It is important to properly arrange the indent. To do this, select the space between the bullet and the word and press TAB. Do this in every line of the list. 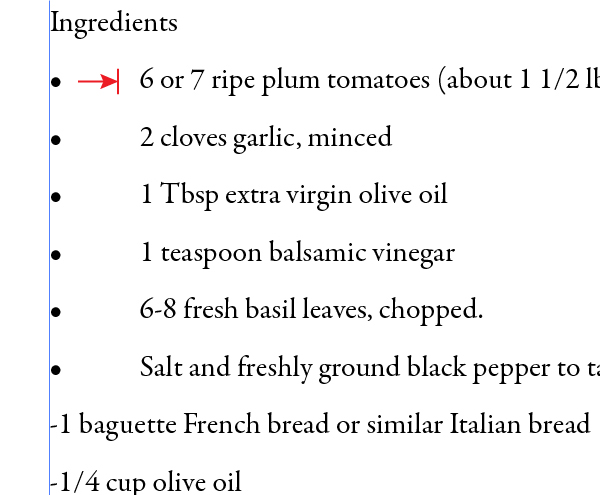 Check whether there is a tab symbol anywhere, and there are no extra spaces. To do this, go to Type > Show hidden characters. The tab character should be represented by an arrow (space is represented with a point, there should be no spaces). 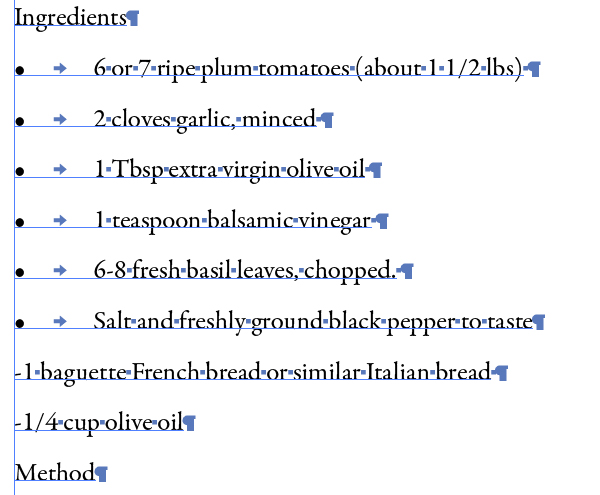 Select the rows with the elements of the list and open the tab panel (Window > Type > Tabs). Place the marker of the tab on the rule box at the place from where the list items start. 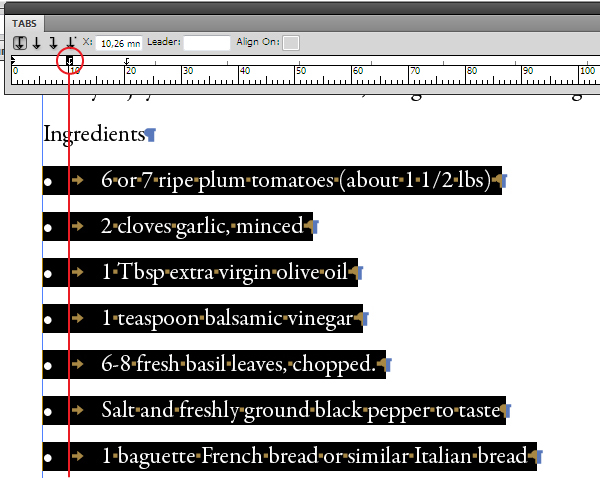 Note: that bulleted lists should be formatted with the help of the Tabs panel, but in no way using multiple spaces.

Your text may contain dashes. It is a gross mistake to put a hyphen or double hyphen instead of a dash! There is a character for the dash that we can type by clicking Option + Shift + _ for Mac (Alt + 0151 for Windows). Replace hyphens with dashes where needed.

There are two types of dashes - short (en dash) and long (em dash). "En dash" is keyed in by a combination of keys Option + _ for Mac (Alt + 0150 for Windows). It is used to denote the spacing between the dates. 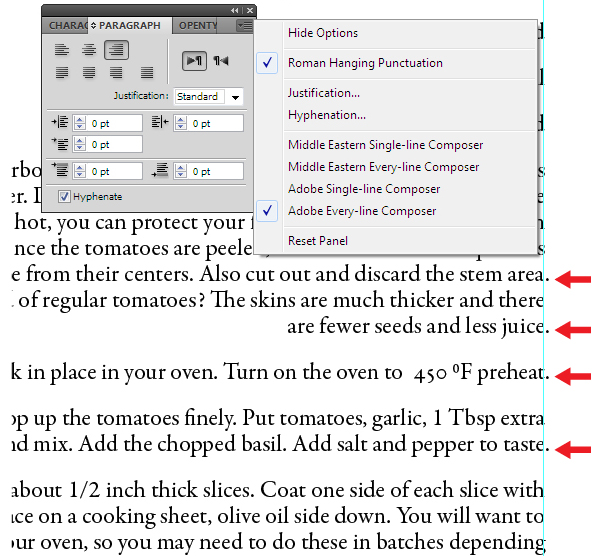 To add authenticity to the text, you can change the shape of some letters. To this, in the OpenType panel (Window > Type > OpenType) press the buttons shown in the picture below. 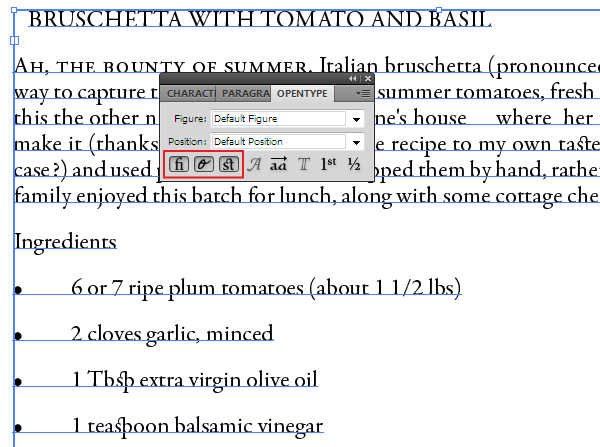 The program will automatically replace the characters with the Ligatures (Ligature (from Lat. ligatura) – is a character of any system of writing, formed by joining two or more letters). Characters that have contextual alternates will be replaced by their alternatives. Ligatures and contextual alternates, unfortunately, are not available in all fonts.

As a result of our transformation we got the following text. 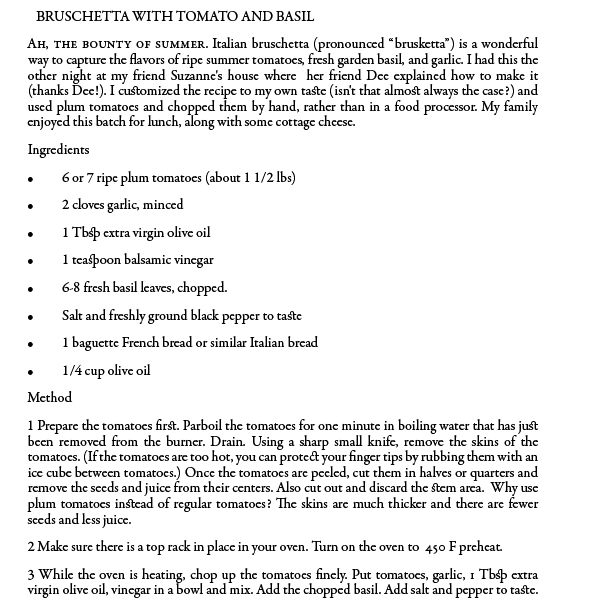 Note: the entire described above can be used for formatting text in Adobe InDesign.