Whether you're a Playstation, PC, Xbox or Nintendo fan, there will be vector video games fan art out there to suit your tastes. Today I give you twenty-one amazing pieces of fan made video game art that will knock your socks off! 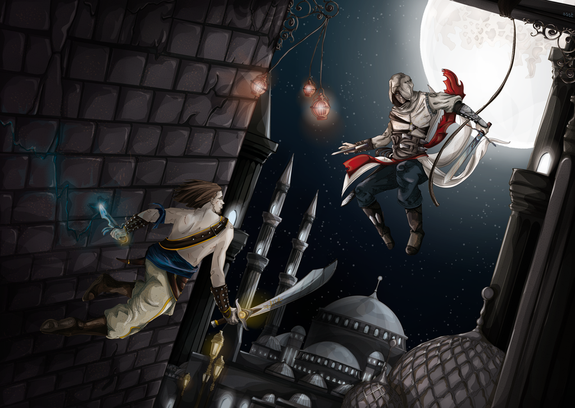 When I was first putting together today's inspirational article, Ssst was the first artist who came to mind. With her unique style of line art and vector shading, as a fan she has created some truly inspiring video game art. The first is Prelude Fight featuring a fight between an unlikely duo... Prince of Persia versus Assassin's Creed. She uses a variety of stock references to not only create detailed characters but also elaborate backdrops.

The next mash up of characters from games is Dante vs Dante in the clever Prelude Fight 2. Our fighters are Dante from the Playstation 2 (PS2) game series Devil May Cry and Dante from last year's release of Dante's Inferno. Mixing fantasy and medieval in this beautifully crafted vector-raster mix. Key colors from the games packaging are used as a major influence in the color palette with hues of red dominating the composition. The orientation of the piece helps emphasis the movement of the characters in mid-fight. 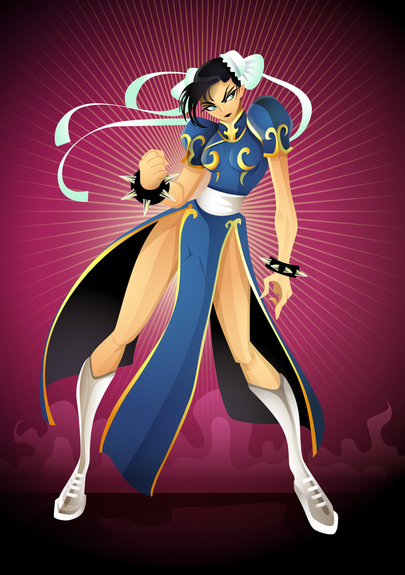 Sygnin has created an illustration of the classic Street Fighter character Chun Li with this video game fan art. The way this piece has been illustrated helps to assert she's a fighting machine. With the toned muscles in her limbs, the stern look on her face and the flowing fabrics in the hair and her dress create movement in her stance.

Living on the Edge by CRCerberus 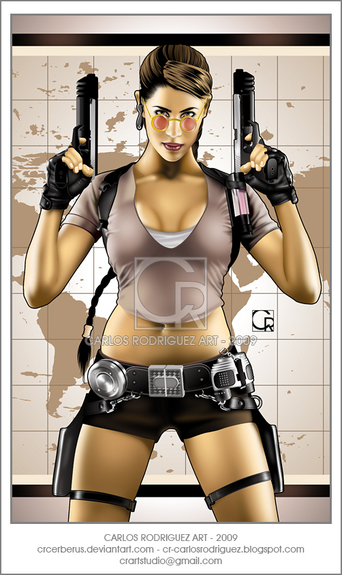 CRCerberus has a vast portfolio of vectored girls and uses a similar process for most. Using vector shapes and Gaussian Blurs to create an airbrushed effect in Macromedia Freehand MX. Video game girls are a popular fan art category for artists to work in. This particular piece is of the iconic Lara Croft from the Tomb Raider series. He's mixed his airbrush look shapes and gradients to create our heroine in one of her famous poses.

Team Fortress 2 (TF2) has to one of my favorite multi-player shooter games, but I could never get used to the Engineer character. Crumbelievable has created a wonderful piece of gamer fan art of the Engineer in a relaxing composition. What I love about this video game art is that the bold, colorful palette is in keeping with the game itself, which isn't a dulled atmospheric game, but has a brightly colored almost cartoon feel to it.

Meet the Pyro by Wakabee 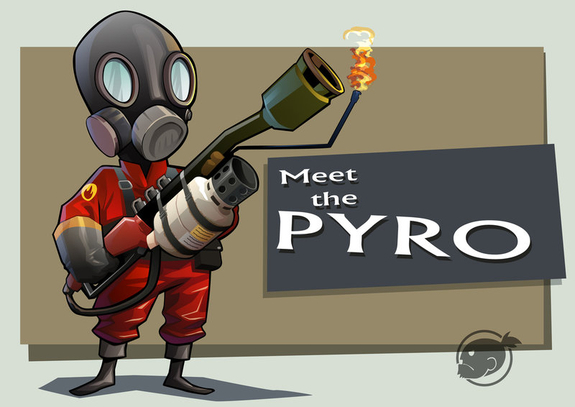 Keeping the same light hearted style, Meet the Pyro. The Pyro is a bit of a chunky character with a flame thrower and the style this illustration has been created in gives him an almost cute disposition. This video game art uses a mixture of complex gradients and angular shapes to produce an effective and stylish vectored fan illustration. 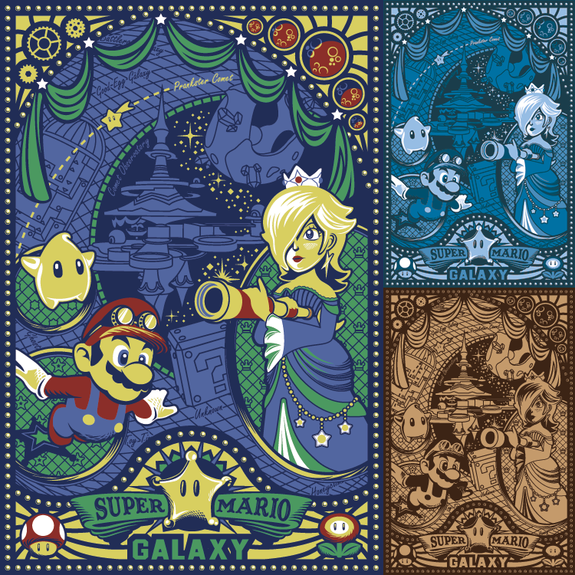 Ctrl Alt Delete has created a mixture of a silkscreen style with Art Nouveau elements to create a graphic dedication to Nintendo's iconic Super Mario's hero and damsel. The artist has also provided us with a varied view of the design in monochrome and two tone coloring, which would take full advantage of the layering style. Check out the level of detailing in the line work for the shading in this video game art. 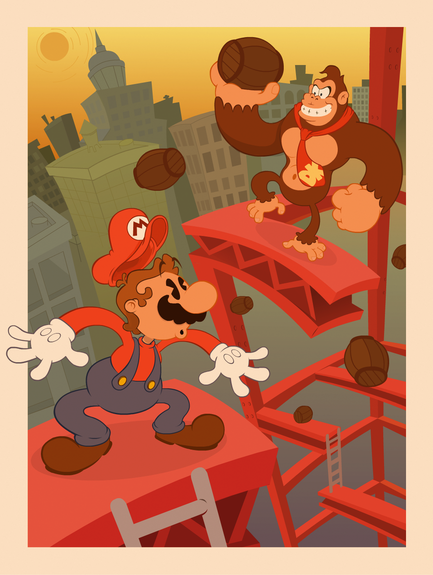 How about some 1920's inspired Mario and Donkey Kong video game fan art? Mixing a style you'd be familiar with in old Mickey Mouse cartoons and two much favored characters, ItsFrisbee has rendered a sketch originally done by Mattdog with a muted palette and complimentary line art. 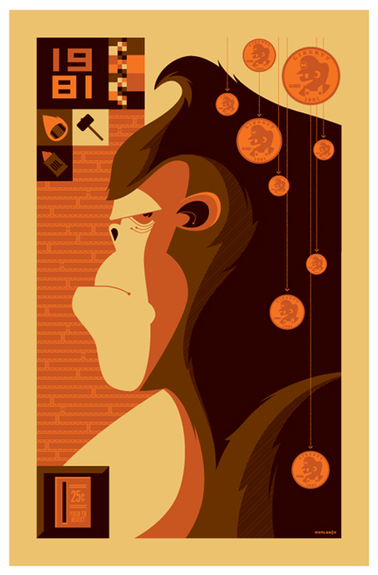 One of two video game art pieces from the talented StrongStuff. The first is of Donkey Kong. Mixing patterns, delicate detailing and a monochrome palette gives Donkey Kong a retro feeling. I adore the Mario coin addition to the composition and the square pattern to give a subtle hint of the blocky pixels from the original game.

Fanart Bioshock 2 is another video game fan art piece by Crumbelievable. This time the focus is that of a Big Sister and a Little Sister. The characters have been illustrated in such a unique manner that adds charm to the evil iconic characters from the sequel of Bioshock. A highly colored and detailed composition with an inspiring and complex backdrop. A definite full view of this piece is required to truly take in the detail within. 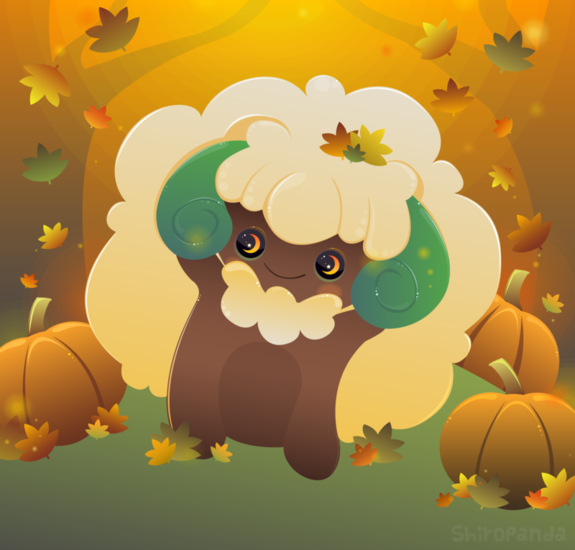 OK, I admit, I'm not a huge fan of the Pokémon series, but I am a fan of Shiropanda's style of characterization and vector shading. Using a mixture of modified shapes and gradients, she's created Erufuunm the grass Pokémon. The use of lines and spots used as highlights and the stars in the eyes are an especially good touch. 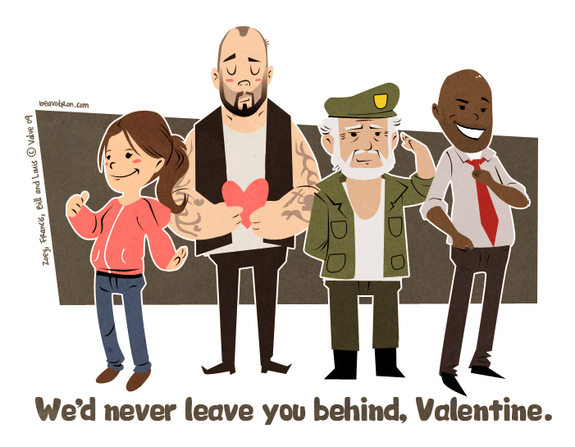 Who doesn't love killing zombies... Beavotron's fan art piece of the original four survivors from Left4Dead. If you're a fan of the game, check out Beavotron's gallery for more Valentine's themed L4D video game art pieces. The use of subtle textures added to the vector shapes balances out the use of the simple shapes. Tied in with the Valentine's theme and comical tag line, her gallery certainly makes you smile! 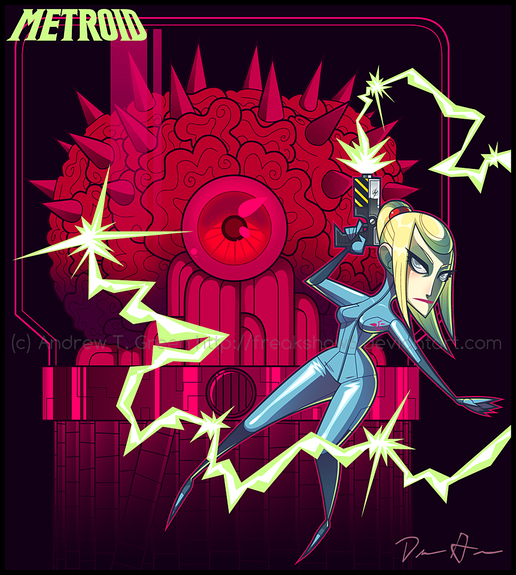 FreakShow6 has two video game artworks features here, the first is from the 80s science fiction game, Metroid. I adore how FreakShow6's style is so unique and his use of color gives it a retro feel. The contrast of the bright pink, blue and yellow-green helps give it an 8-bit impression and further adds to the composition. 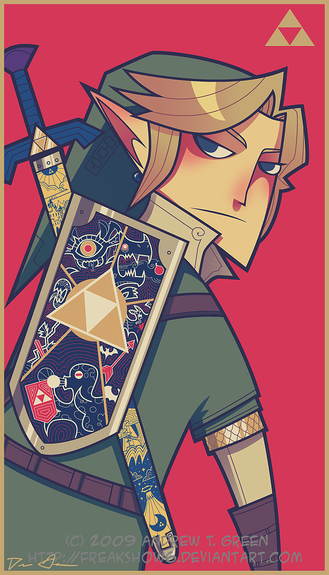 This time FreakShow6 has created Link fan art from the fantasy Legend of Zelda series. He's mixed subtle gradients, stylish line art and delicate patterns on the shield. Ensuring the iconic costume of Link has been maintained, he's skillfully been able to use his style and still the viewer can recognize the character with ease. 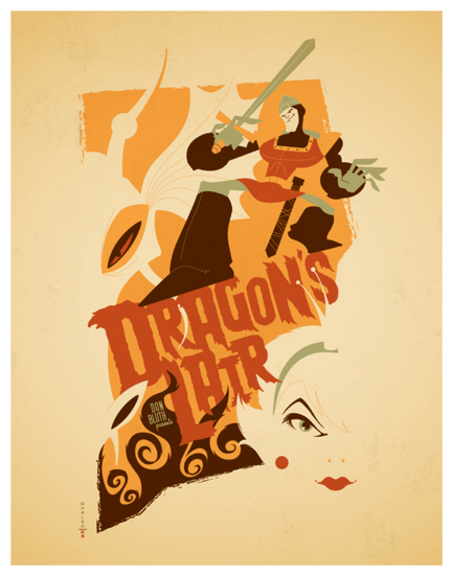 Another retro video game fan art from StrongStuff and this time of the cult arcade game Dragon's Lair in a poster format. The composition brings you inwards with the clever use of negative space and the characters overlapping. Using a limited palette and an ever so subtle texture to create a striking design.

Grand Theft Auto (GTA) has a very graphic style and with its blocky shading it's inevitable that it would influence the vector community. This is a great way of using the style to create a self portrait. MHarkz187 has used a similar color palette and bold line art to ensure it screams GTA. 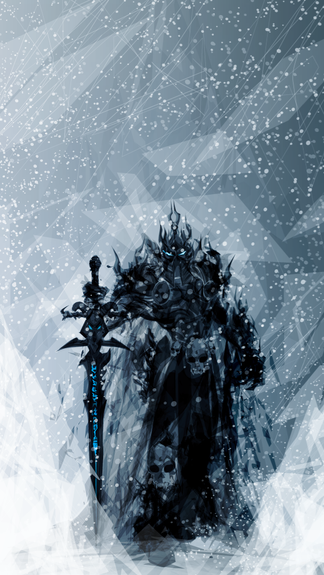 Now for four pieces to do with one of my all time favorite games... the PC massive multi-player online role playing game (MMORPG), World of Warcraft (WoW).

The first video game art piece is by Justin Currie and features the key villain from the third expansion Wrath of the Lich King. It's been uniquely rendered in such a way that the shapes and brush strokes fit the themes of the game, creating a strong, dark figure amidst the snow landscapes of Icecrown.

One of the many races/class combinations available in WoW is the Horde Troll Rogue, which has been beautifully rendered in Flash by Puzzletoad. Her gallery is filled with further fantastic Warcraft video game art compositions. Like this one, it has bold line art and well illustrated armor. This piece in particular demonstrates a great character design, along with intricate detailing on the weaponry and great modifications in Photoshop to create movement. 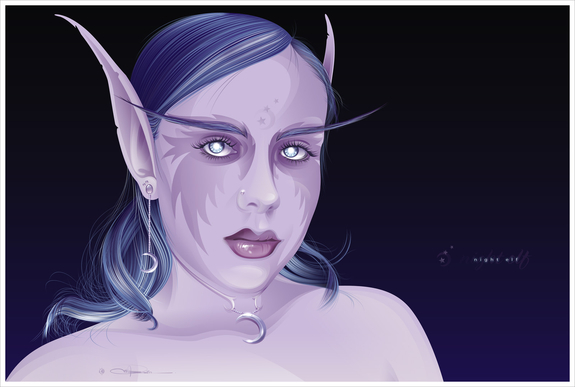 Using a stock image as a base, CD Marcus has been able to create a wonderfully detailed portrait of an Alliance Night Elf, with amazing details in the hair and embellishments on the skin and jewelry. Nightelf is definitely worth a closer look to see the skillful use of gradients and strokes used in this video game art.

Finally, if you're wanting to learn how to create a Warcraft inspired portrait yourself from stock, this one being of a Blood Elf, check out my tutorial here on Vectortuts+. Using a lot of low opacity shapes and gradients to create soft looking skin and brushes to illustrate a detailed hairstyle.

Today's article is only the tip of the iceberg of the game fan art out there. With many groups on deviantART dedicated to game art, you can keep up to date on your favorite games, platforms and even characters!

What is your favorite computer game of all time? Do you have any of your own fan game art made to share with us?