The Elements of Cute Character Design

You've always wanted to develop a character which has the potential to enchant the world and to compete with Hello Kitty? In this article I'd like to present some elements making a character cute and lovable and to support you in achieving your goals. First, I talk about why something is regarded as cute. Afterwards I'd like to offer an overall view on cute proportions and as a conclusion consider general rules and tips. The goal is to create a manual of cute character design which can be universally used in the process of design.

This Post is Day 1 of our Character Illustration Session. Creative Sessions

In order to understand the factors that make a character cute, it has to be explained why we regard something as cute. Don't worry, I won't take you on a psychological expedition into the depths of your subconsciousness. It's way easier.

As newborns and infants human beings are not able to survive without help and care by adults. So a newborn needs certain characteristics which show its helplessness and need of protection so that adults are requested to take care of the baby. It has been scientifically proven that a baby's proportions evoke such behaviour.

These childlike characteristics make a baby sweet and bring us to build rapport. We find it dinky. That even works when we see things reminding us of a baby or just parts of it.

That means these characteristics can be consciously transfused and applied, for example in the field of designing things and of course especially when it comes to character design. It's best if we consider the proportions in detail. 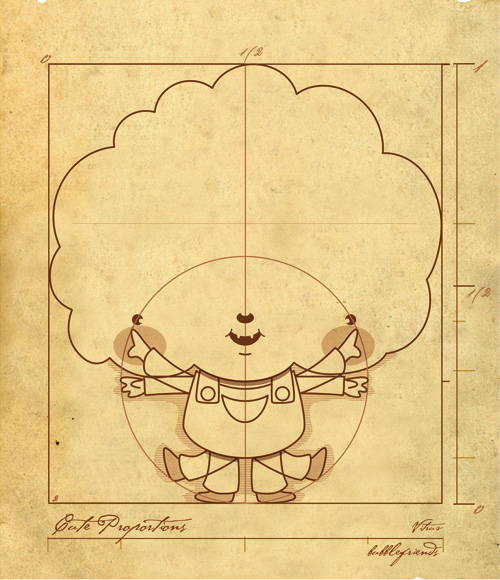 As the human skull grows only a little we are born with a relatively big head. The length of the head of a baby averages a fourth of its body-length. It is only an eighth of an adult's body-length. The outcome of this is an important trait of proportion of cuteness. Cute characters need big and round heads. Their size can constitute even the half of the whole body-length. Exaggerations are possible and sometimes even necessary. Try it out!

A big head leaves much space for a beautiful face. So that it becomes cute, a few things have to be considered. The eyes and ears are placed proportionally low in the face and on the skull. Thus the forehead becomes very long. In addition, the eyes are a long way away from each other. Both characteristics are very important.

Likewise the eyes have to show forward, also for example in designs of snakes and birds. The eyes of a newborn are relatively big. Big eyes make a character dinky. Frankly said, most of the time I don't design huge and detailed eyes. That is a question of flavor.

A baby's nose is very soft and not fully developed. It looks very dinky as a snub nose.

The mouth should not be shown in dimensions that are too big. Small sizes work better, as big mouths appear dangerous. In fact, some cute Japanese characters don't have a mouth at all. So, it is not necessary when something ought to become cute. From my point of view, I don't want to surrender it. Pay attention that the mouth is not too far away from the eyes.

I like to give my characters two little teeth, because this reminds me of a kid's milk teeth, which drop out. It looks very cute, and takes away a bit of the character's perfection, which makes them even more lovable. 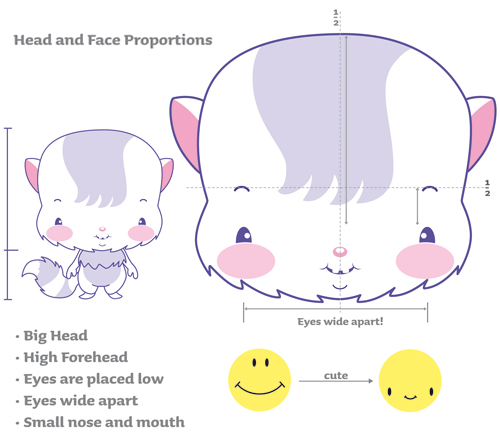 The arms should not be too long. The forms are soft and round. Muscles don't fit here. The fingers are short and fat. To draw fingers as fat as possible, there is a little trick: Just leave a finger out. Considering Mickey Mouse it works very well.

The legs of the character should be very short and plump. That makes it seem not only clumsy, but also relaxed and passive. Passivity and a light touch of helplessness weakens our protective instinct, the basic prerequisite. The waddling that is caused by the short legs is very cute. What is dinkier than the waddling motion of penguins? 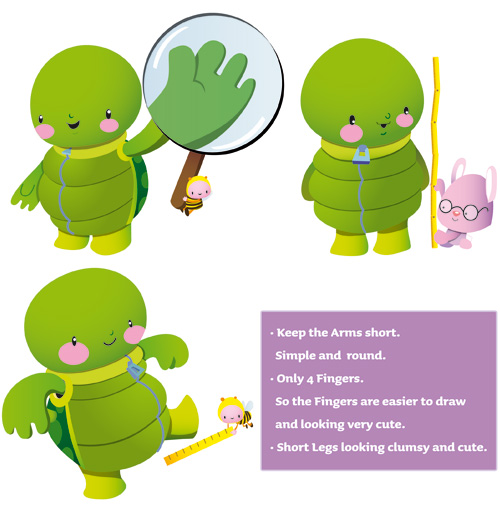 Independent from these traits of proportion there are further characteristics which should be considered. It's a matter of general thoughts that affects the success of a cute character design.

While drawing, pay attention that the forms of your characters stay round. Round forms are friendly and invite us to cuddle them. Contours should be drawn soft and round. Keep the stroke thick! Hard and irregular contours with pointed angles disturb the overall picture and don't fit in when it comes to cuteness.

Keep it simple! It is important not to make your characters too complex. Too many details only disrupts and dilutes the overall picture. The reduction accentuates the elements that remain. They make a character universally applicable. For children and for adults as well, simple is cute! 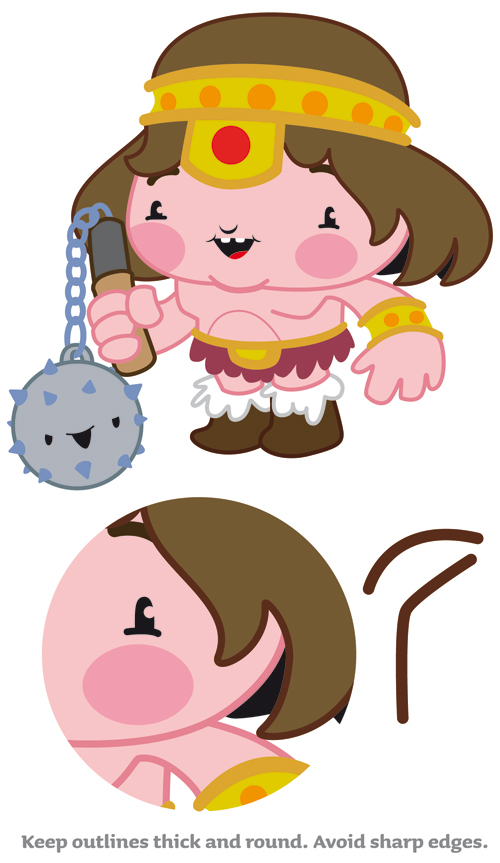 Exceptionally cute characters are small and lovely. Squirrels are sweet, small rabbits are sweet. Small creatures don't seem to embody danger because we can easily keep them under control. Applied on character design it means that King Kong clearly has a lower position in the chart of cuteness than the little rabbit. The character has to be lovable, to be precise it has to appear open-hearted and sociable. 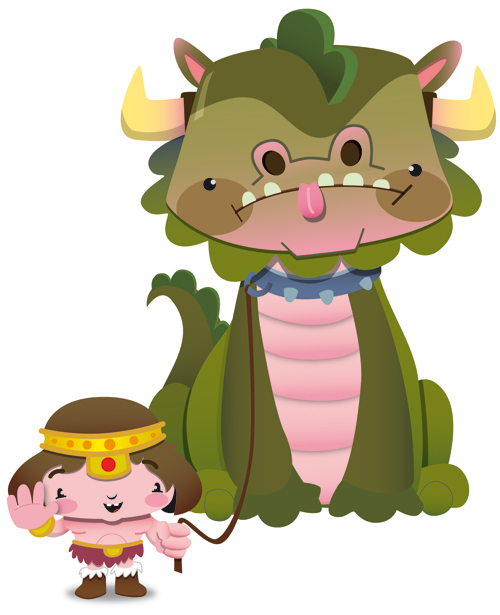 Colors help to highlight the character traits of the figure. Although there are no real cute colors, the cuteness of a character can still be supported by the color used. Warm and friendly colors look friendly and inviting. Colors like pink, yellow, light blue or white look smooth, innocent and pure. Pastel colors also fit very well. They have approximately the same tonal value and therefore just a few contrasts. That makes them look soft and smooth.

Hard contrasts should rather be avoided unless a certain statement is intended. Hard contrasts make a character seem to be alive and powerful. But these character traits do not fit in concerning the definition of cuteness. 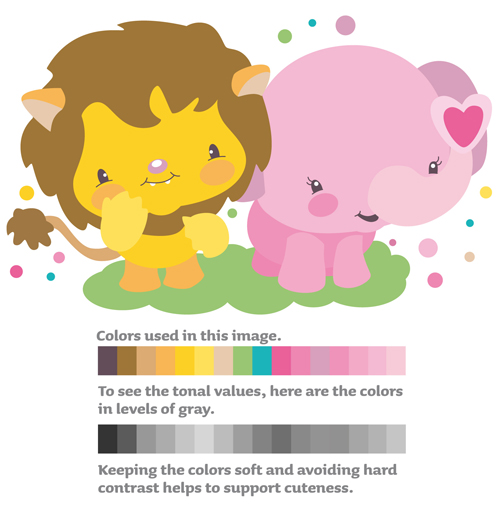 I hope I succeeded in offering a good overall view on the elements of cuteness. This is only meant as an enumeration of all elements. It is not necessary to stick to all of them slavishly and to work them all in the character.

Exaggerations are good instruments, so that a character design stays alive and individual. It can also be useful to infringe upon some of the elements, for example by combining cute and non-cute elements, applying hard contrasts or very dark colors or by inventing a background story that shows that the character isn't cute at all but evil and wicked. This helps to accentuate your character design out of the huge mass of the simply cute figures. Like in all other fields of design, it is helpful to think about a convincing and original concept first. 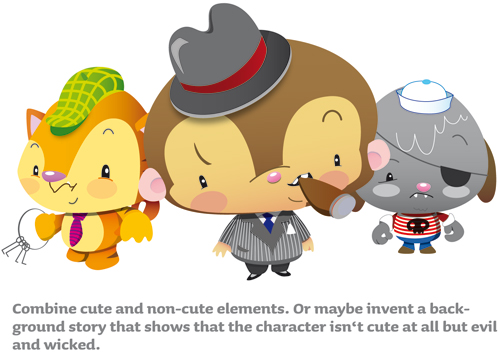 This Post is Day 1 of our Illustrative Lettering Session. Creative Sessions
Session Day 2 »