The proverb is, "all work and no play makes Jack a dull boy" and with their love of toys, movies and Japanese animation, Aya and Shingo Miyazaki of design team Hyaku show that you can have the best of both worlds and be successful.

Hyaku means luck in Japanese. Actually it translates to "one hundred" which itself is considered a lucky number in Japan. Illustrator Aya Miyazaki and Art Director Shingo Miyazaki chose Hyaku as the name of their design business back in 2002 and over the last nine years it has proven to be a wise choice. Not all of their commercial success is because of sheer luck, however. Talent obviously plays a large part and if Hyaku is anything, it's talented. 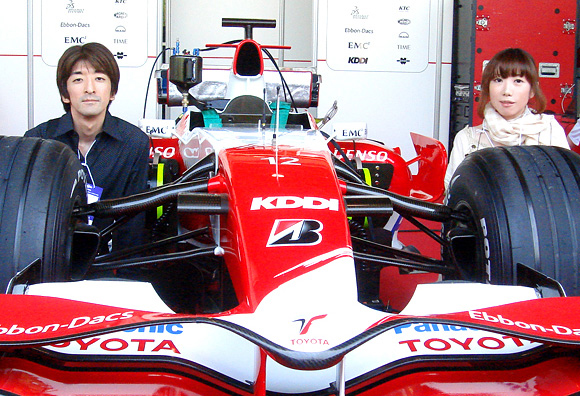 Growing up in the late 1970s, both Shingo and Aya benefited from artistic households as Shingo's mother is a designer and Aya's father practices illustration as a hobby. As children they surrounded themselves in Japanese animation, MANGA and video games which not only fostered their love of drawing, but of toys and figurines as well. Though their parents encouraged such play, they weren't entirely supportive of illustration as a career option at first. "We think our parents are worried that we won't be able to make a living as an illustrator. But please don't worry!" They didn't always want to be artists, though. Shingo wanted to be a drummer, which continues to be his favorite hobby, and Aya had an early passion for fashion and wanted to be a hair/makeup artist or a seamstress for Karl Lagerfeld. Nevertheless, illustration was the path that they both chose.

They attended a Tokyo art school where they met in an illustration class, yet didn't get into vector illustrations until leaving school. After graduating in 1999 they both went on to work for graphic design companies before coming back together and starting Hyaku in 2002. They grew tired of being asked to imitate the art of others and decided that the only way they would be happy in their careers was to do what they wanted to do. In fact, that is one of Shingo's biggest pieces of advice for up-and-coming illustrators: have fun at work. 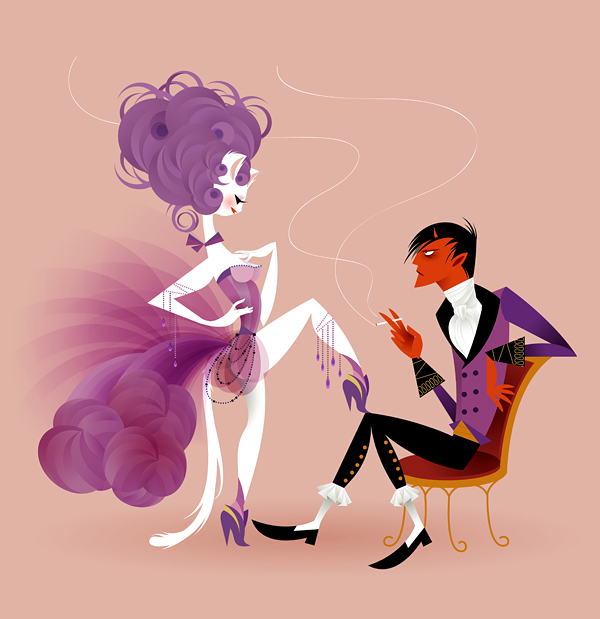 Fun is definitely in the air at their company. Their office as well as their apartment in Toyko is decorated with the figurines that started their love of art and they will soon be able to add another toy to their collection. This is quite possibly the most important one yet since they created it themselves, having won the RAJE Toys Project Blueprint contest. Their design, along with the 15 other contest winners, was unveiled at the 2010 New York Comic Con event and is expected to be available in early 2011.

Toys aren't the only artistic creations that take up space in their home and office. Shingo and Aya are huge movie buffs and movie posters cover their walls. Some of their favorite films are "The Godfather," "Star Wars," "Pulp Fiction," and "Apocalypse Now." It's only natural that some of their favorite directors are the minds behind these films. 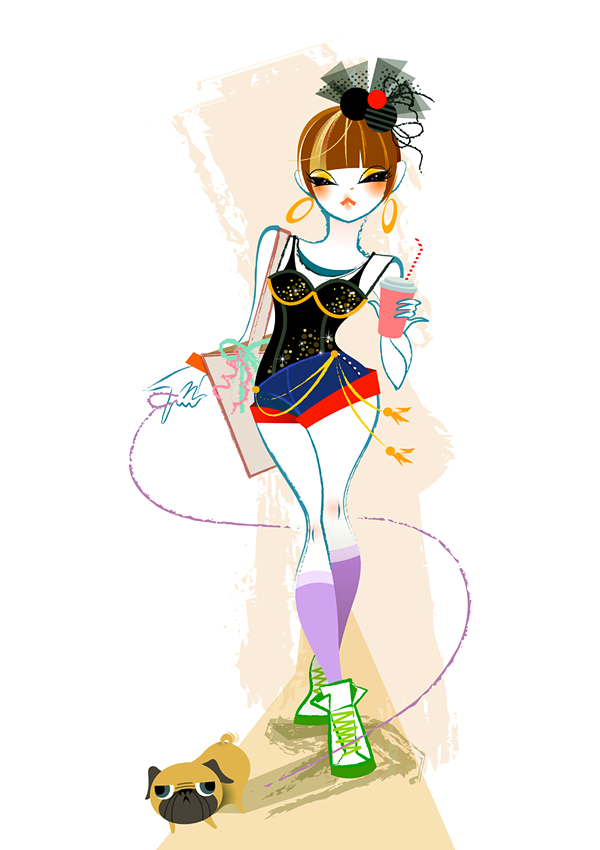 One thing that these films have in common is very memorable, well-developed characters. Hyaku follows suit when they are creating their character illustrations.

Our characters all have different personalities. [They all] have settings such as names, personalities, hobbies [and] there are times when the settings don't appear in the illustrations. By coming up with these settings, [it] gives the characters individuality and brings them to life."

Their favorite part of creating each unique character is when they are brainstorming all of the details that make that character who it is, such as clothing and setting. Once they have those ideas in mind they get to work using their Macs, Wacom tablets and most importantly, they add, spirit(!!). 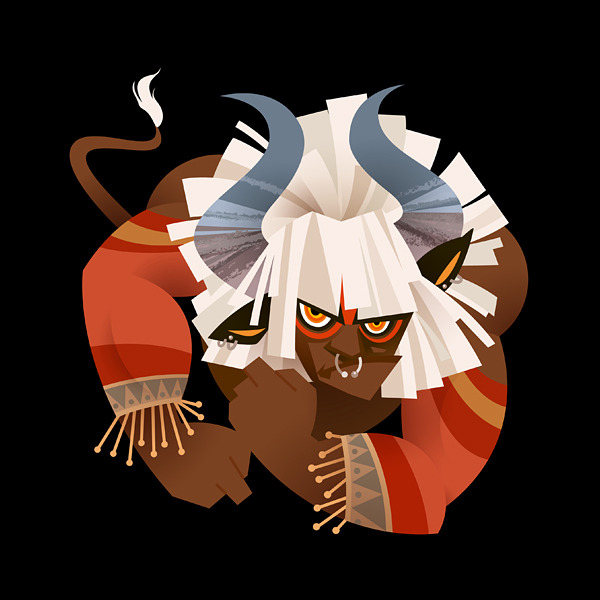 Like many designers, they find themselves working on extremely tight deadlines, which is their biggest complaint.

"There are times when we think if there was more time, we could have done a better design. Still, we think that meeting the deadline is very important as a professional."

Short deadlines don't always go along with one of their biggest project requirements: the ability to express their individuality. "We are very happy if we meet a client or agent who is requiring our originality. We receive jobs by phone or via e-mail, and head to the client's company for further arrangements. We then show a rough sketch, and then deliver the finished work. We try to understand exactly what the client is requesting and propose the best we can do." This consistent process, their professionalism and unique designs have resulted in a client list that includes the Japanese snack company, Tohato, Inc., mobile phone companies NTT DoCoMo, Inc. and KDDI CORPORATION and various Japanese magazines.

Right now Shingo and Aya balance a heavy workload that has them working seven days a week on projects that include snack package design and personal work consisting of costume design and illustration. The latter fits perfectly with one of Aya's favorite pastimes, musicals ("We love CATS!!") and fashion design ( "[The]Galliano show is amazing!"). In fact, in addition to movies and MANGA, fashion is one of their biggest inspirations. 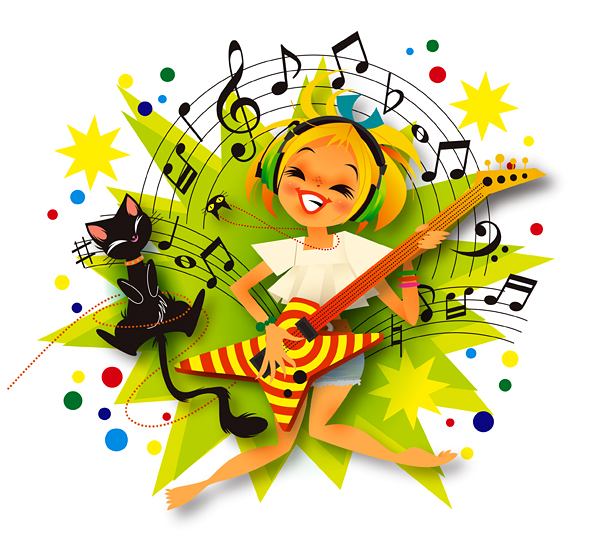 Hyaku eventually wants to expand their design business to include clients outside of their native Japan. Seeing that they had one of their beloved toy designs featured at New York's Comic Con this year, that shouldn't be a problem. After all, they have luck on their side.