Profile: Getting into Character with Cartoonist George Coghill

From bad jokes to sultry devil girls, Cartoon Character Designer George Coghill knows how to inject some fun into life. He set aside some time to talk with us about everything from the importance of knowing how to run a business to what it’s like to see his characters come to life.

This may sound like the beginning of a comic book or graphic novel, but it is, in fact, the beginning of one of the bad jokes freelance cartoonist & cartoon illustrator George Coghill claims he's known for.

Hailing from Kent, Ohio, Coghill knew from an early age that he wanted to draw cartoons and other illustrations. His parents learned this as well after a trip to the Cleveland Museum of Art found him surrounded by a group of kids drawing what his mom thought for sure was something inappropriate. Have no fear, though. Coghill was merely drawing a knight on a horse. The saucier illustrations come many years down the road.

“…A policeman stops by to ask what the problem is, and the man tells him he's looking for his keys…”

drawing skills are learned, not some innate talent.

Initially he studied in the illustration and design program, but soon found that the illustration program wasn't as advanced as he originally thought. He then moved into the Fine Arts program, got his degree, bought his first Mac and hit the proverbial road.

Early in his career Coghill worked for a cartoon character development company where he developed The Kooties-both the characters and back story. These were intended to be used as original character groups for the licensing industry. These characters were eventually picked up by a plush doll manufacturer and test marketed for Keds. 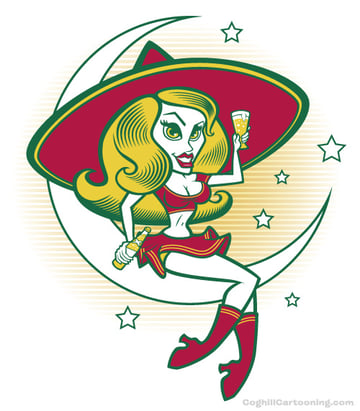 This venture led to him teaming up with a film production company that was interested in doing a live-action ﬁlm-based on the characters. Unfortunately though, the project was shelved due to a number of factors within the production company. That didn't stop Coghill from pursuing his dream, though. "That experience awakened in me the possibilities of making money creating cartoon characters, and during that time I was able to not only polish up my existing Photoshop skills, but also learn Adobe Illustrator, which is my main creative tool today."

“…The policeman then begins to help him look…”

One thing that Coghill did not learn from Kent State was anything about running your own business. In fact, that is one of the biggest pieces of advice that he gives to those starting out.

As a child Coghill was shy and introverted. His goal growing up was to work for MAD Magazine or to create heavy metal album covers. He credits the former for his early inspiration to draw. He says he still is shy to a certain degree, but has learned to hide it better. In fact, it'd be difficult to find a hint of that shy kid in any of his illustrations, which he characterizes as being "fun." Take his "Devil Girl" series, for example. As some of the most-viewed images on his Flickr page and best-selling images in his Zazzle store, Coghill set out to change things up a bit. "Much of the devil girl art I've seen throughout the years is very risqué, and when I created my devil girl character I wanted her to be sexy, but not in a trashy or NC-17 way. I try to draw the devil girl and pinup girls in a way that's appealing to both men and women." He then goes on to say that the key to drawing pinup girls is "exaggeration." I didn't ask him to elaborate on that, of course. 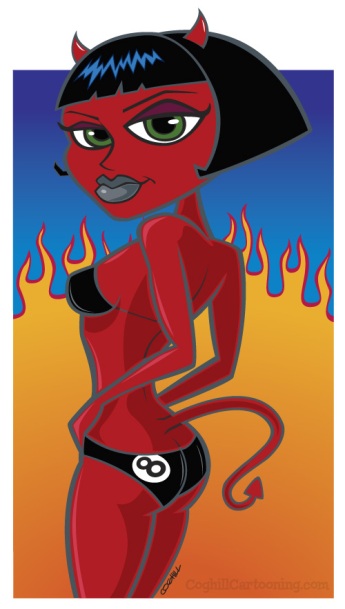 “…After an hour of searching, the cop asks the man if he's sure he lost his keys here…”

Though his creations are playful and fun, Coghill is serious about running his business. In fact, one of the most important lessons he's learned is in pricing your services, "Be realistic about who you are working with and your level of skill and notoriety, but most creative types don't charge enough for what they do. People who shop on price will always think you're 'too much' and those that shop on quality realize you get what you pay for. And those are always the best clients to work with." 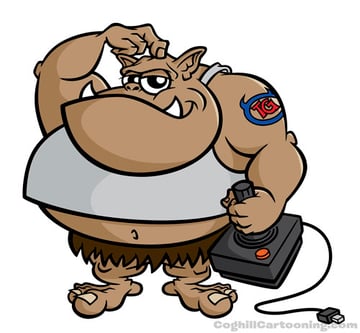 When it comes to clients, Coghill has the initial steps in the creative process down to a science. "I do have a detailed contact form on my website for new inquiries, and for my recent website redesign I went to great lengths to pre-answer the typical questions and concerns about the process." This initial Q&A is important because "the sketch stage is best for getting concepts across and the initial answers go a long way in avoiding drawing useless concepts." He adds that most of his clients come to him knowing basically what they want, anyway. That doesn't mean that Coghill is immune to the occasional creative block, though, which he overcomes by browsing artist portfolios on the internet and connecting with fellow artists through Twitter. Readers can also keep informed on what he's up to by reading his blog.

Coghill's typical clients are small businesses looking for a cartoon character mascot or logo. Logos, interestingly enough, are something that Coghill wishes he could do better. "Whenever I see a very clever design-based logo, especially one that incorporates letters and negative space in an ingenious way, I get a twinge of jealousy." Regardless of how he feels about his logo-creation ability, Coghill's portfolio still contains some impressive clients including Saatchi &Saatchi, Cleveland Scene, Cleveland Free Times, Time Out NY, the Akron Art Museum and Hiram College.

Whoever the client, though, there are parts of the process that Coghill relishes in, "[My favorite part of] character design-it's a toss-up between the sketch stage — specifically that point where it all "comes together" — and the shading stage of the vector art creation where the character really starts to come alive."

Coghill does most of his sketching on laser paper with a fat 5.6mm lead holder which he then scans in and cleans up using Photoshop. At that point he finalizes it as hand-created vector art in Illustrator. "Since Creative Suite 4 I have gone pretty much digital for most of the process. I work on a Mac, and use a Wacom Intuos 4 Medium tablet. Dual monitors are a must!"

“… The man replies “No, I lost them down the street but the light is much better over here!”

These days find Coghill a number of projects, one of them being the development of cartoon character mascots for an amusement park in Georgia- a pirate and an alligator to be exact. He says that through his online networking, he's discovered he's got a knack for creative software as well as explaining it to other people. While he will never give up his cartoons, this is one direction that he's considering expanding his business to include.

There's only so much you can teach as far as drawing, most of it is practice and perseverance. Tools on the other hand can be the key to unlocking deeper levels of creativity as they've done for me, and I think I would enjoy sharing that with others who want to learn.

InterviewsVector
Did you find this post useful?
Yes No
Would you like to provide feedback (optional)?
Cancel Submit