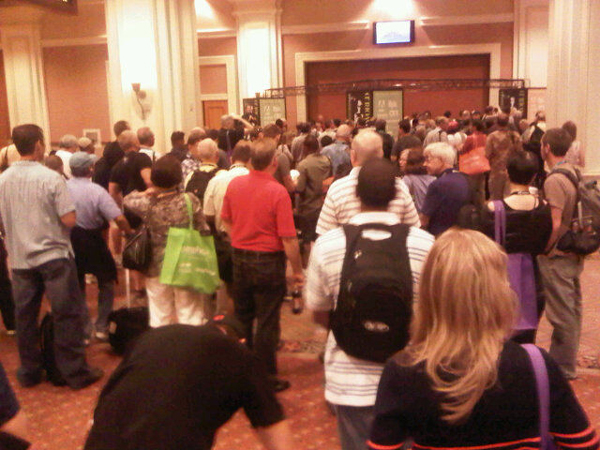 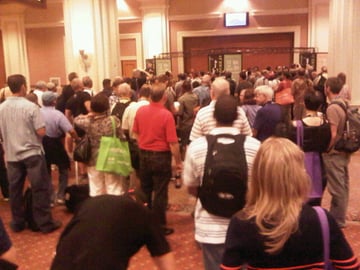 The line to get into Photoshop World before the keynote.

I also found that the conference tended to slant towards the photography community. As a designer, this was something that I found a bit disappointing. I was hoping to attend some interesting design workshops; and while there were certainly a few design-related workshops on the schedule, the majority of them were geared toward photographers. This meant that I spent a majority of my time walking the expo floor, learning about some of the products on display, and meeting new people instead of learning new tricks.

Representatives at the Wacom booth demonstrated their tablets.

Meeting new people was my primary reason for attending the conference. As some one who works from home, it’s important to attend these types of events to get to know some of the key players in the Photoshop community, and to build real-life relationships with the people I know online. While I was there I got to speak with quite a few members of the Photoshop team, as well as many others who work at Adobe. Everyone I spoke to from Adobe was extremely friendly and answered all the questions I had. 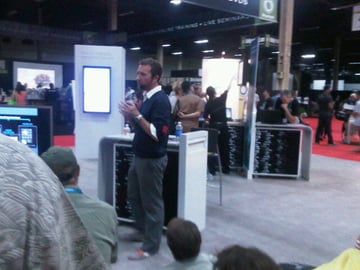 I had a fantastic time in Las Vegas for Photoshop World. I really enjoy Las Vegas and try to make the best of it whenever I am there. Aside from attending the conference, I managed to eat some great meals, lay out by the pool, and even enjoy some of the Vegas nightlife. I also really enjoyed meeting some people that I’ve never met offline. I got to speak with Sr. Photoshop Product Manager, Bryan O'Neil Hughes, and Photoshop Product Manager, Zorana Gee, Scott Valentine, Patrick LaMontagne, Dave Cross, Kevin Stohlmeyer, and many others.

The next Photoshop World event will take place in March 2012 in Washington, D.C. Hopefully, I will see you there!