Paranormal Movie Posters That Will Give You Goosebumps

If you're a big fan of the paranormal movie genre then you definitely know how interesting and unique their movie posters are. Not all the movies featured on this list are amazing cinematic masterpieces or grossed billions of dollars, but they all have great visuals to support what we can view on the big screen.

Some of the coolest movie posters created lately have been made for paranormal, and sci-fi thrillers. These gravity defying, Armageddon centered, or deserted planet movie posters are created by some extremely talented designers who use a lot of the same techniques featured on this website. These posters are made to showcase the basic aspect of a movie, with just enough to get a prospective viewer engaged to check out the movie. Therefore, just like advertisements these posters have to showcase some amazing imagery whether it be simplistic and esthetically clean or some heavy painting and photo-manipulation. Whatever gets the point across that this is a movie you need to watch, and I believe these 25 posters do just that. So let’s start this roundup of the best paranormal and sci-fi thriller movie posters.

We start off with the movie Knowing, about a professor who finds a secret code that predicts upcoming apocalyptic events that shake the foundation of Earth. The poster itself ties into the whole secret code of the universe by having the code itself start to disintegrate the earth. This features some very clean painting with a simple black backdrop. This makes for a very cool paranormal thriller poster.

If anyone has seen Inception they can definitely tell you that it is a little bit more complicated than your average film, and from that we get these amazing gravity defying posters. The majority of the movie takes place inside people’s dreams, hence all the amazing impossible scenery shots. Both posters featured for this movie have some great coloring and lighting as well as photo-manipulation effects that go against our natural laws of gravity which points to the fact that the movie wont take place in a normal setting. 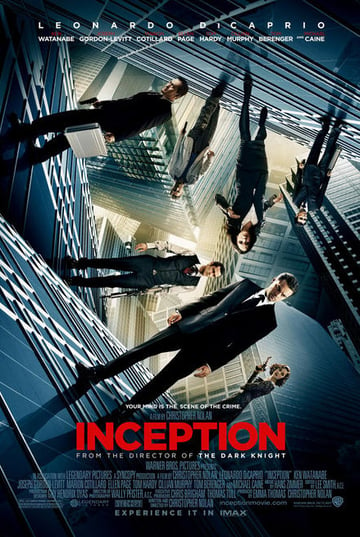 District 9 takes place in a world co-habituated by aliens and humans. The aliens have been quarantined into one area "District 9" and the movie takes place in this dark grungy setting. The posters definitely convey the same message that the movie puts out, and you can see that from the taglines as well as the barbed wire fences and "No Humans Allowed" signs. This is another set of very cool posters for a sci-fi movie.

The Day The Earth Stood Still

A very common Sci-Fi movie plot is the invasion of an alien species to earth, and this one followed that script closely but with a few twists. The remake of the 1951 original features an awesome poster of what seems to be some kind of force field collapsing onto earth while all of the people are standing in anticipation for the event about to unfold. As for the design of this poster it uses some great photo-manipulation techniques as well as lighting and setting a very dark environment. 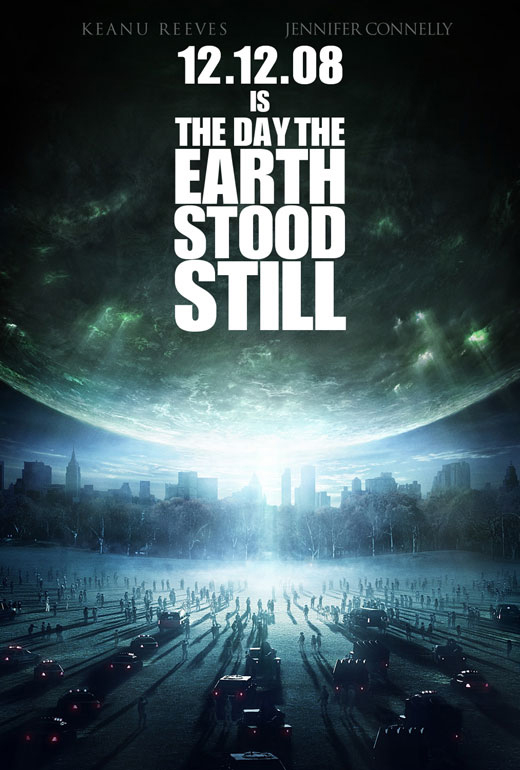 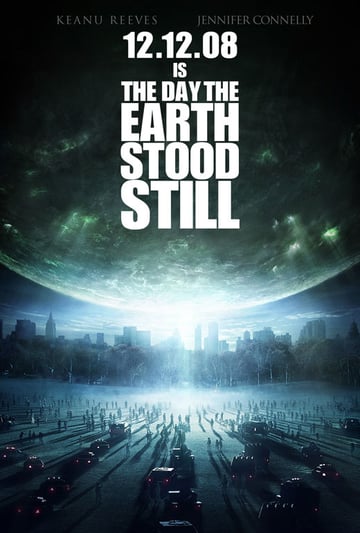 The Day After Tomorrow

The apocalypse a scary time for the world is often portrayed in paranormal thrillers. The Day After Tomorrow follows a protagonist attempting to reach New York with his son while the world is having a new ice age. The posters featured for this movie definitely get the point across that New York has been transformed into an uninhabitable arctic land. Matte Painting techniques were used here by mixing shots of the Statute Of Liberty with various environmental disasters that were featured in the movie. 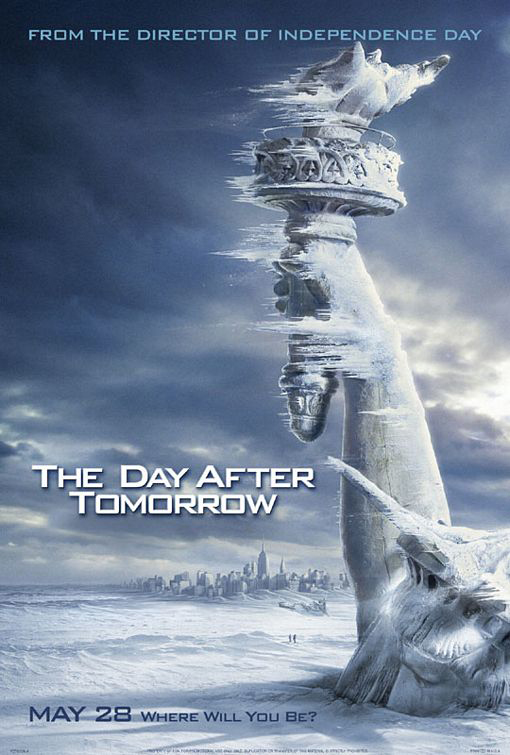 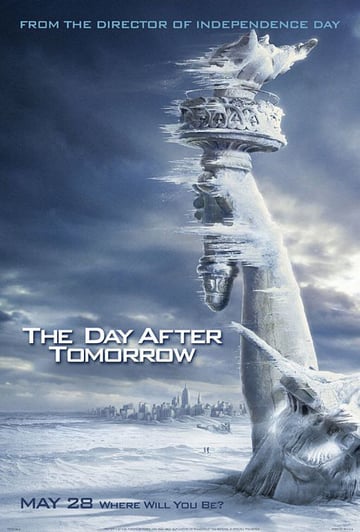 Aliens and New York seem to be a reoccurring theme in these paranormal thrillers, Cloverfield takes place in New York as a space alien invades the city and starts to cause havoc. The tagline featured on the main poster reinforces the plot of the movie and the amazing visuals show us just what has happened to the city after an invader has landed. The New York Skyline has been destroyed through painting and photo-manipulation techniques. 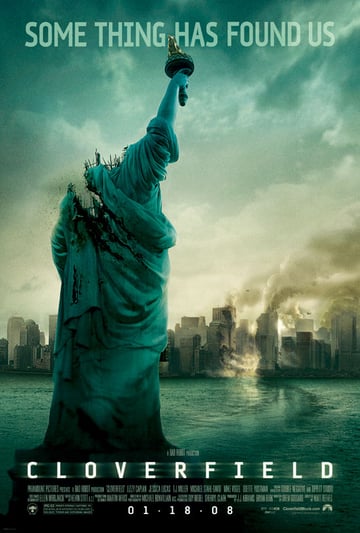 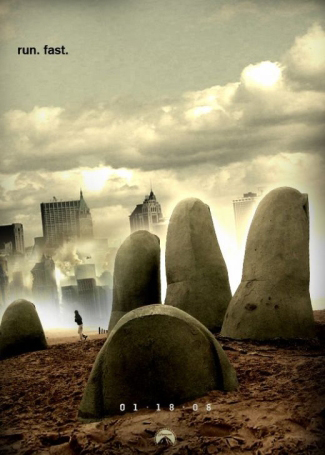 Everyone in the world knows what happens in Avatar so I'll just skip the plot rundown and head straight for this beautiful poster. The scenery featured here sets a very soft environment with the background sunset and the extraordinary matte painting of the floating islands you see in the movie. This poster gives the viewer a small look into Pandora and its vast wonders with some top-notch designing.

The end of the world might sound like a horrible event to some, but from a designers perspective some very cool stuff goes down. That is essentially why these posters are on this list, mountains being flooded or huge streets crumbling to pieces are some very interesting visuals that make for great photo-manipulation pieces. This 2012 poster is a great example of a bunch of stocks and painting coming together to form one scary looking scene. 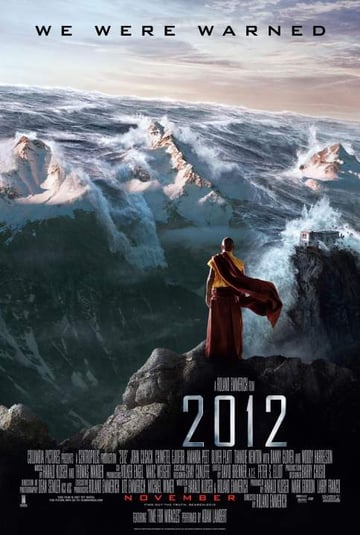 V For Vendetta takes place in an authoritarian society where anarchy breaks out. The posters featured are a good representation of the grungy and dark setting that the movie itself takes place in. Both posters use some vector techniques to illustrate the plot of the movie, which has to deal with revolt against the oppressors. This is a unique take to a movie poster because of its simple nature, yet it doesn't lack depth and meaning. 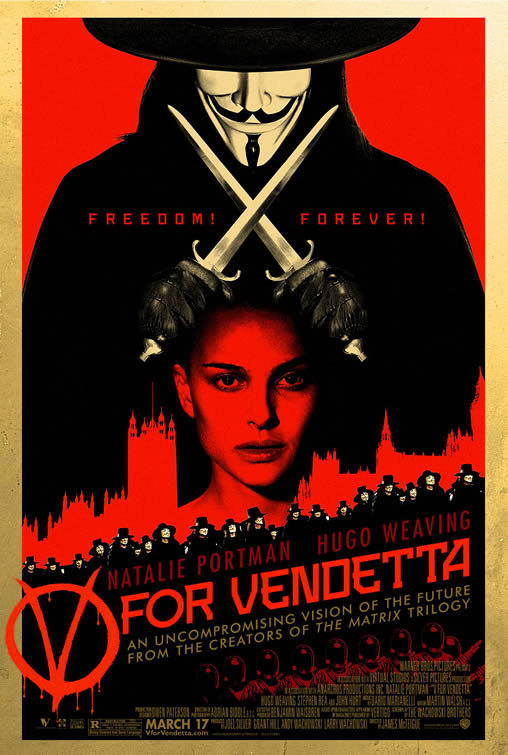 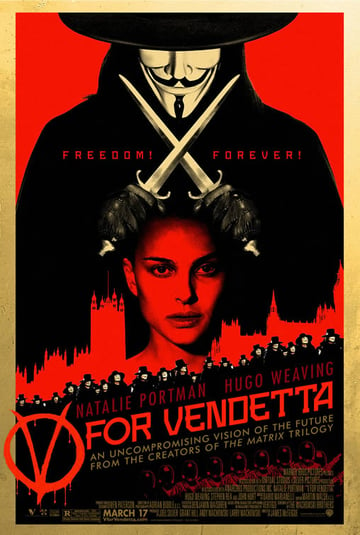 Based on arguably the best graphic novel ever created, The Watchmen takes place in an alternate universe where superheroes existed but then were outlawed. The setting of this movie is similar to that of V for Vendetta as it is also set in a very authoritarian society where anarchy strikes the government. This dark environment is portrayed perfectly in the backdrop of the posters featured. 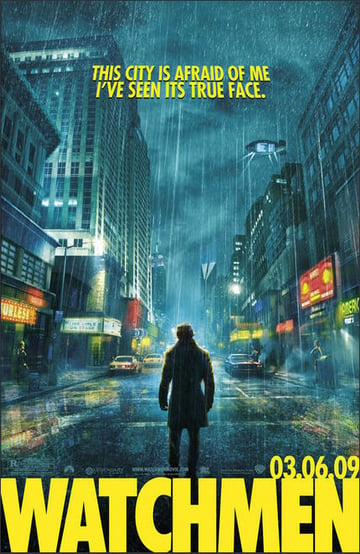 The remake of the classic Sci-Fi movie has taken a futuristic approach to the visuals, which you can definitely see in the posters featured. The bright neon gridlines that were used in the original seem to pop a lot more now as well as the revamped motorcycle and suite. The second poster in this set has a very ominous environment behind it that is lit perfectly to match the rest of the poster. 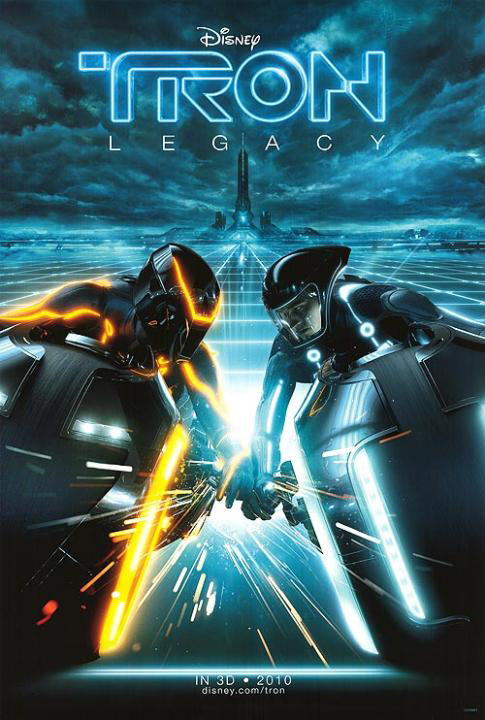 This dark look at the batman franchise spawned off some of the best visuals featured in this set. The antagonist of this film, The Joker, set a very dismal and dooming setting for Batman and the posters reflect just that. The first one features some very strong visuals of the famous Bat Symbol etched into a building by an explosion, and the second features a sick collage of the batman made by the joker himself. The posters feature some top-notch blending and photo-manipulation techniques.

This reboot of the Terminator classics takes place in the not so distant future where a nuclear disaster has occurred leaving humans to survive against the robots. The poster featured for this movie takes a very creative approach, using a bird’s eye view to show a path of destruction and chaos in the shape of an evil robot. This manipulation of land stocks is a very interesting poster concept. 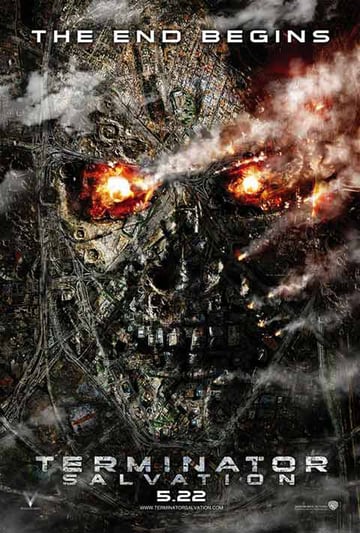 In this movie Los Angeles is the site of an extraterrestrial invasion, and the movie poster perfectly illustrated the alien attack that you would see in the movie. This poster was partially made through a 3D program to create the alien spacecraft coming down into the LA skyline. The environment sets a very eerie mood, which probably coincides with the tone of the movie itself.

The poster featured for the movie Moon is aesthetically simple yet says a lot about the movie. The circular representation of the moon has the main character astronaut standing on it by himself surrounded by nothing else. This works with the whole premise of the movie where the protagonist is alone on the moon. This is a very pleasing poster to look at because it gets the point across with ease in a nice abstract manner. 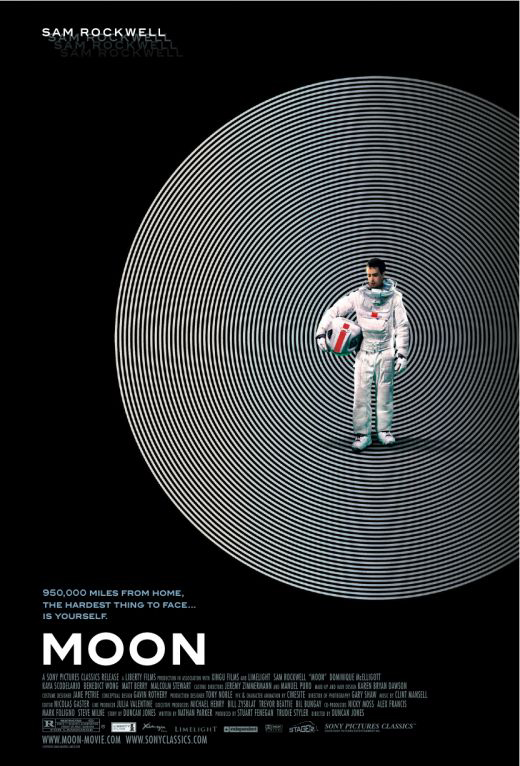 Our last set of movie posters come from the popular video game turned movie Max Payne. This dark thriller features the main character Max Payne who is hunting down the people who murdered his family. This sets a very grim mood to the movie and the posters do the plot line justice. The first poster shows Payne on his knees with a dark angel looming over him, and the second is a graffiti-esque illustration that ties into the whole dark rebellious city theme that the movie was going for. Both pieces used some painting techniques as well as photo-manipulation. 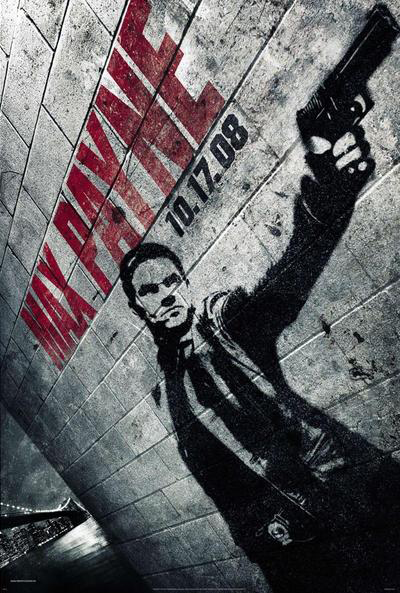 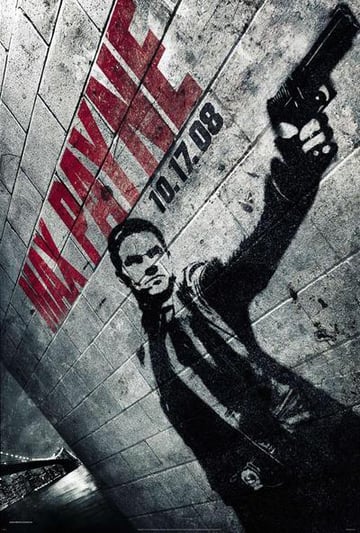 If this article has got you inspired to create your own Movie Posters then go ahead and check out the following roundup of some of the best Movie poster tutorials on the net! 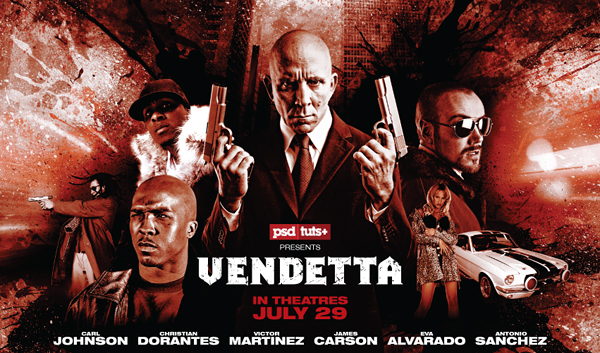 Pirates Of The
Caribbean Movie Poster 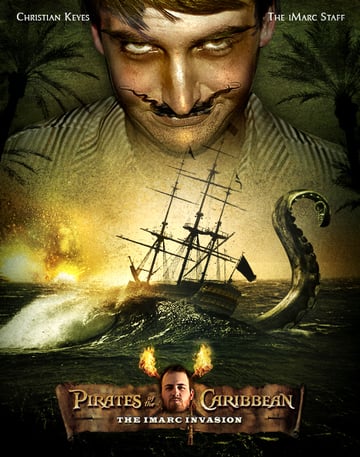 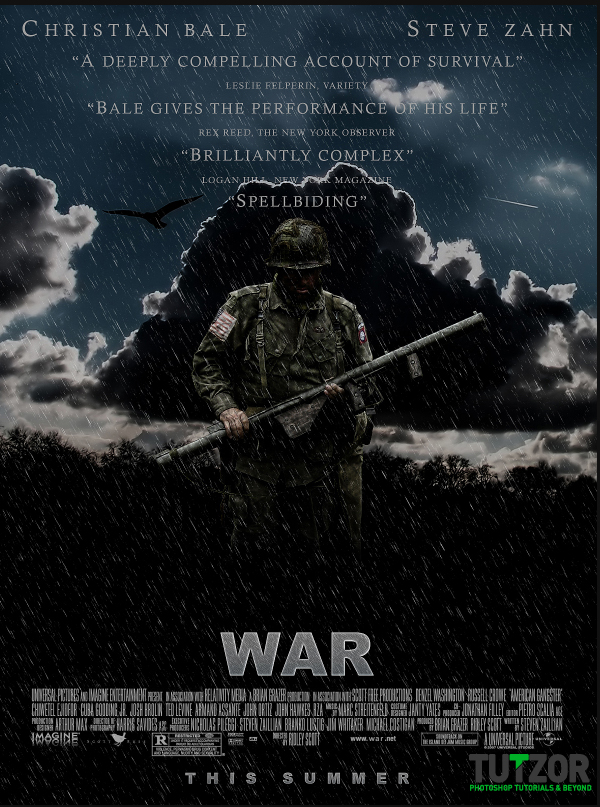 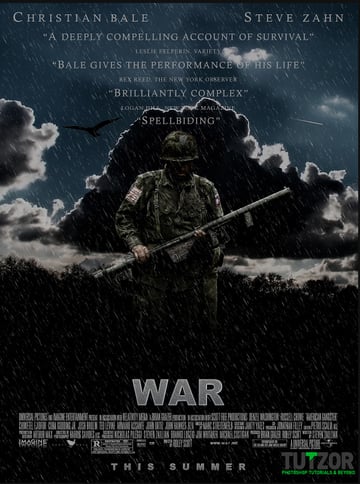