"An animating and life-affirming coral hue with a golden undertone that energizes and enlivens with a softer edge."

Let's dive into what this color represents, what the previous Colors of the Year were, and how you can include Living Coral in your designs.

What Are Pantone Colors?

If you’ve been working in graphic design for a while, you’ve probably heard of Pantone Colors, but do you know exactly what they are and why they’re so important to designers?

Pantone Colors for graphic designers are an incredible range of over 2,600 solid colors created by Pantone that are the foundation of the Pantone Matching System. This system is a standardised color matching system, designed by Pantone to ensure color accuracy and consistency in color online and across printing surfaces.

Color accuracy and consistency has always been a challenge in printing, even with the popular CMYK system of printing, which can give small variations in results depending on the technique and paper used for printing.

Each Pantone color created for graphic design is identified by a proprietary naming system that consists of the Pantone brand name followed by a color name and/or a unique number, followed by a letter—usually C for coated, U for uncoated, M for matte, and TCX, which stands for Textile Paper Edition. These letters refer to the paper the color has been created to be printed on. So most Pantone numbers look something like this: Pantone 16-1546 TCX.

Here’s an example of how the Pantone Matching System works:

That, in essence, is the beauty of the Pantone Matching System.

What Is the Pantone Color of the Year?

Every year, since 2000, the Pantone Color Institute scours the globe to find a color worthy of carrying the title ‘Color of the Year’.

The company itself defines the Color of the Year as:

“A symbolic color selection; a color snapshot of what we see taking place in our global culture that serves as an expression of a mood and an attitude.”

And how do they come up with a color snapshot?

Let’s have a closer look at Living Coral, followed by a look at some of the colors that made the grade in the past.

Pantone Color of the Year 2019

Luscious, nourishing, life-sustaining and mostly hidden from view, PANTONE Living Coral captures the wonder and magic of our coral reefs, which support a quarter of all marine species and half a billion people around the world.

As Leatrice Eiseman, the executive director of the Pantone Color Institute, says:

By calling their 2019 color ‘Living' Coral, Pantone draws our attention directly to our warming and polluted oceans, where half of the coral reefs are dead and where 90% will have died by 2050. Even more reason to celebrate these endangered eco-systems and go forth with optimism, as Pantone says, as we work to protect them.

Pantone Color of the Year 2018

For 2018, Pantone invited us all to embrace the mystery of what lies ahead for us personally and as a species with their choice of the enigmatic ultra violet. Although it's long been a color that symbolises nobility and spirituality, Pantone embraced purple’s more contemporary roots as a favourite of non-conformists and musical innovators like Jimi Hendrix, David Bowie, and Prince.

As Leatrice Eiseman, the Executive Director of the Pantone Color Institute, put it:

"We are living in a time that requires inventiveness and imagination. It is this kind of creative inspiration that is indigenous to PANTONE 18-3838 Ultra Violet, a blue-based purple that takes our awareness and potential to a higher level.”

With this choice of ultra violet, their celebration of innovation and their references to the cosmos, the company seemed to be endorsing the idea that our future just might lie somewhere in the clouds, figuratively and literally.

Pantone Color of the Year 2017

Gorgeous green, evocative of the forests and fields. Pantone saw greenery as the life-affirming shade of spring and a symbol of new beginnings. They clearly thought that at a time of mass deforestation, global warming and political upheaval, green was the symbol of hope and renewal we all needed.

“Greenery bursts forth in 2017 to provide us with the reassurance we yearn for amid a tumultuous social and political environment. Satisfying our growing desire to rejuvenate and revitalise, Greenery symbolises the reconnection we seek with nature, one another and a larger purpose.”

Pantone also equated their choice of green to the human need to reconnect with nature and to have more of it incorporated into urban planning, architecture, lifestyle and design choices globally.

The First Pantone Color of the Year 2000

Evocative of the sky and the sea, this blue was a color that the folks at Pantone felt best represented the new millennium and the hope for peace and tranquility in the coming century.

"Surrounding yourself with Cerulean blue could bring on a certain peace because it reminds you of time spent outdoors, on a beach, near the water - associations with restful, peaceful, relaxing times. In addition, it makes the unknown a little less frightening because the sky, which is a presence in our lives every day, is a constant and is always there.”

Pantone also noted that blue is related to the water and raises awareness of the issue of water shortages around the world and concerns about the exhaustion of our natural resources.

If you're also moved and energised by Pantone's 2019 choice of Living Coral, how about getting to work on some coral-themed designs? Here are seven premium resources to get you started. You can download them all from Envato Market and Envato Elements.

Get ahead of the curve with these Living Coral business card templates. These high-resolution layered PSD files are ideal for both personal and corporate use and are super easy to customise and edit.


Try the retro trend and coral, and set yourself apart from the pack with this editable invitation postcards. These gorgeous postcards come in AI, EPS and PSD versions and have a print size of 7"x5" at 300dpi.


What could be better than combining wonderful coral tones and greys? Check out these trendy watercolor patterns and hand-crafted backgrounds from this digital paper pack. These 14 unique designs are 6x6 inches at 300dpi and are perfect for scrapbooking, photo albums, gift wrapping, cards and many other projects. 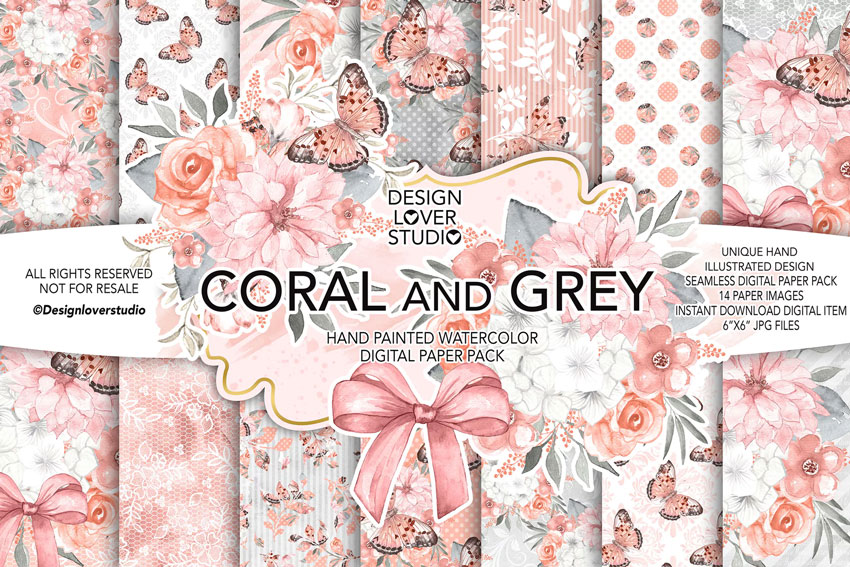 Looking to create a new brand or update your old one? Get on trend with this brand identity mockup. The pack includes 13 PSD files which include useful items like an A4 folder, envelope, business card, CD with cover, A4 letterhead, and all the other stationery you'd need as a brand.

Looking for an on-trend Living Coral UI Kit? Why not try this one, which features mainly shades of orange and coral. With over 80 Material Design screens and 12 popular categories, this colorful, contemporary design is compatible with Sketch and Photoshop and is fully customisable.

Take the color name literally with this seamless vector coral pattern and celebrate the splendour of the real living coral in all its splendour. These textures and silhouettes come in five format versions: AI, EPS, PSD, PNG, and JPG, all for your convenience.

Download these premium resources from Envato Market and Envato Elements to aid in your Living Coral designs, and then check out our tutorials below.

Get Your 'Living Coral' Tutorial Groove On

Are you into Living Coral as much as we are? Then you've got to try these tutorials and incorporate shades of living coral into your designs.


If you're as in love with this color as much as we are, create something with it and share your work with us! We'd love to see what you come up with.

And don't forget to check out the helpful collection of tutorials we've shared here if you get stuck. For more hot Living Coral assets, check out Envato Market and Envato Elements. Have fun!

Nona Blackman
Copywriter
Jill-of-all-creative trades, mistress of some!
Weekly email summary
Subscribe below and we’ll send you a weekly email summary of all new Design & Illustration tutorials. Never miss out on learning about the next big thing.
Advertisement
Translations