Jeff Suter and His Life Among Super Heroes

For Marvel Sr. Art Director Jeff Suter, life is anything but dull. When he’s not creating promotional materials for Marvel’s huge cast of characters, he’s mixing and hosting their podcast or performing with his band. In this profile, we get a glimpse into a guy who is living every little boy’s dream…rubbing elbows with the heroes and villains of Marvel comics.

Good vs. evil is the oldest storyline known to man - especially in comic books- and every story is made up of a cast of characters with a cause. There are the villains that we love to hate and the heroes that we can’t help but love. The one thing that these characters have in common is how multi-dimensional they are. In other words, there’s more to them than meets the eye.

Such is the case with Marvel Sr. Art Director Jeff Suter who oversees the design and execution of their marketing and sales materials. By day he gets the word out about Marvel in just about every promotional method possible and by night he’s a rock star who loves animals (he pets his Koi) and enjoys yoga. 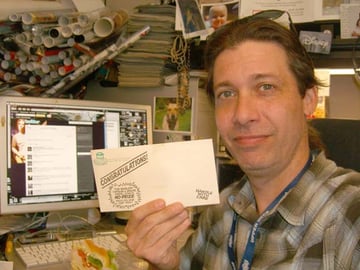 A Star is Born

As a fifth-grader in 1980s New Jersey, Suter stood out from his classmates as having that “something special.” So much in fact that a former teacher, a friend of his aunt’s, recommended that his family get him into acting. What started out as a small ad clipped from the newspaper turned into professional representation by renowned talent manager Shirley Grant whose past clients include The Jonas Brothers and Christina Ricci. Within days of answering that non-descript ad he was auditioning for TV commercials, radio spots, and Broadway shows. Ironically his first TV commercial was for a Superman toy. Within a year, Suter landed over a dozen national TV spots and was cast as Tiny Tim for the Radio City Music Hall Christmas Spectacular for the 1979 holiday season. Over the course of his entire child acting career Suter filmed over 80 national TV Spots and recorded 100 voice-overs.

Always a performer, Suter loved Halloween to the extent that he started his preparations in August and made it into quite the event complete with numerous costumer changes throughout the day and “old school special effects make-up.” It’s no wonder that Suter wanted to pursue that as a career, dreaming of one day studying under Special FX master Tom Savini (Dawn of the Dead, Friday the 13th.)

Throughout his childhood his parents supported his every endeavor, no matter how odd it seemed at the time. “They always knew I’d make my own path and they were always very supportive of what I wanted to do. They knew that fail was not really part of my vocabulary,” he said. Nonetheless, his mom was probably very relieved to know that he enjoyed “typical” little boy things as well- mainly Mad Magazine. He still owns his first copy- the 1976 Jaws issue.

[My parents] always knew I’d make my own path and they were always very supportive of what I wanted to do. They knew that fail was not really part of my vocabulary.

Like the Marvel characters he promotes, Suter has a lot going on behind the scenes. He lives with his wife Cathy in the mountains of Sussex County, New Jersey, giving him a two-hour commute (one way) to his office in Manhattan. Theirs is a converted Cape home, decorated in an eclectic traditional/bohemian style. Cathy is a talented painter, so many of her works adorn their walls and Suter collects musical instruments (mainly guitars,) old magic tricks and swords.

Suter and his wife share their space with two rescue dogs, Jack, an English Shepherd , Molly, a Shetland Shepherd mix, and a 3000 gallon Koi pond filled with fish that are characters in and of themselves. They consider themselves to be “huge” animal-rights activists and stopped eating fish once they realized that each fish has its own special, unique personality. “They are part of the family,” he said, “[even] the dogs love them too and they will go up to the dogs when the pups are taking a drink from the pond. It’s actually fascinating to watch them interact.”

It seems as if non-verbal communication, in general, fascinates Suter. When he’s not enjoying the show that nature is putting on in his backyard, Suter is putting on a show of his own. Well his band “Hardcover” is anyway. “Performing is in my blood. I love when the crowd connects to you in this very mystic, almost primal way. Non-verbal communication through music gives me goose bumps.” A well-known cover band that has been performing in the NJ rock club scene for the past 19 years, Hardcover has had gigs with some of the biggest bands to come out of Jersey including Firehouse, Trixter and former Guns ‘n Roses guitarist Gilby Clarke.

Up, Up and Away

In every comic, the hero of the story has a job to do, typically defeat the bad guys and save the world, or at least the pretty girl. Getting the pretty girl was the reason Suter got a job at the local movie theater while in high school. “I was madly in love with one of the candy counter girls. Yes boys, get jobs to get girls!” How Peter Parker of him!

After high school, Suter started taking night classes at the local community college while working as a Jr. Art Director at the local print shop in Northern New Jersey. There he learned layout, stat camera operation, multi-plate pre-press work and binding, which eventually led into his love of typography. After a couple of years Suter realized he was learning more in his day job than he was in the classroom so he stopped taking classes- yet that doesn’t mean that’s where his learning ends. “Design is an ever changing learning experience. Every time I think I know something, I soon learn I don’t. I’m always trying to learn and expand. Never, ever stop learning. Be a student of life every day. Take it all in, because as soon you think you have things figured out, you realize you don’t.”

His next position in the art department in a very large photo output/studio/design company had him doing everything from corporate layout, photo retouching and color correction for custom enlargements for sales displays, to chemical mixing, film output, customer service and corporate sales. Suter rarely used a computer at this point, yet the time came where everything went digital…and so did he. “At that time in my life I was like a sponge, just learning every aspect of the new digital age I could.” Suter’s designs have matured over the years and now he describes them as “Clean, but that can be hard in the world of Super Heroes and Mutants!”

In 1997, Suter’s desire to soak up as much design knowledge as he could impressed a client of the design company- the Creative Director at Marvel Comics. The rest, as they say, is history. Over the next thirteen years, Suter would rise through the ranks to become Senior Art Director and eventually…in-house podcaster.

Suter hosts, edits and mixes the Mighty Marvel Podcast where he sits down with some of Marvel’s biggest talents- from the comic writers to the illustrators to the voice-over talent for their multimedia products. In September they hosted their 100th episode and Marvel Editor-in-Chief and Chief Creative Officer Joe Quesada joined them for a chat. These podcasts- in addition to composing music for their multimedia projects and comic trailers- are just the tip of the iceberg when it comes to job satisfaction for Suter. “I love that I get to bring some of my performance and musicianship to my day job. Most people don’t get to enhance their work with their passions and believe me, I thank my lucky stars for the opportunity to do so.”

This gratitude goes along with one of the biggest lessons he’s learned throughout his career:

“You have to make the customer happy. It seems simple, but if the client isn’t satisfied, you are not going to get repeat business. This still applies to me now. Marvel is my client. Marvel needs to be happy at all times with my product, plain and simple.”

Like the boy waiting for the next edition of his Mad Magazine, Suter is looking forward to what’s coming up at Marvel. “This year we headed into our Heroic Age, which basically straightened out the Marvel Universe to get back to the basics. Heroes fighting to protect the innocent. So, the Super Hero team books are just fantastic, and great starting points for new and old readers alike. The huge upcoming X-Men event Age of X is going to be fantastic, and I’m really, really looking forward to it.”