Petros Afshar is a well rounded talented Illustrator from London, England, who works primarily in vector. Today we have a chat with him about his work, his past and future projects and why he prefers the PC over a Mac!

I personally think however that you can still succeed and be prominent as a designer without the need for qualifications. I have many friends who haven't studied a degree and have gone on to do some amazing works for big client names.

Q Hello Petros, please could you tell our readers who you are and what you do?

A Graphic Designer born and raised in London, England. A passion for gardening and love for penguins, in my spare time I like to dabble with music production. I fell head over heels for geometric art, including swiss typography, art deco and modernism simply because I'm generally into pieces that have a balanced structure, scaled composition, and graphical elements that are tied to position, rotation and scale. In my spare time do PR work for monthly and annual social events, as well as freelance work for several clienteles. 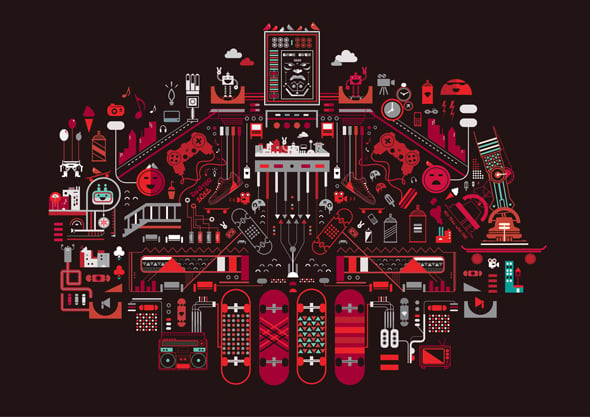 Q How did you get into vector art? What are your tools of the trade (program, tablet, PC/Mac etc...)

Vector art was something I primarily got into since the advent of being taught how to use Illustrator at university. Before then, I wouldn't use anything but Photoshop.

On the subject of computers, I like to use both Mac & PC, although I edge towards my PC a wee bit more.. just because I can't ever lose sight of my roots. I almost feel like I owe it to the PC as it was the first ever piece of equipment that sourced my intrigue for design.

I currently use Adobe Illustrator CS5 and don't think I'll be upgrading anytime soon as I'm one for getting attached to a particular software version and despise constant upgrades- if it ain't broke, don't fix it! My tool of trade has to be the Shape Tool, as it's the fundamental function used to piece my design works, as well as the Pen Tool.

Q On the subject of University, what degree/subject did you study towards? Have you found it vital to your freelance career? Did it cover all the bases you expected it to or do you feel it lacked in some areas? Do you recommend others starting out or wishing to pursue a career in design to gain such a top level qualification?

I studied a BA hons 3 year course on Graphic Design. Studying at my university has definitely helped escalate my knowledge, appreciation and new found love for the subject at hand. I personally think however that you can still succeed and be prominent as a designer without the need for qualifications. I have many friends who haven't studied a degree and have gone on to do some amazing works for big client names. Nonetheless university was a great experience as I had little knowledge on the subject before hand due to my academic background prior to delving into a creative path, so I'd say it was definitely a good kickstarter for my career in freelance. 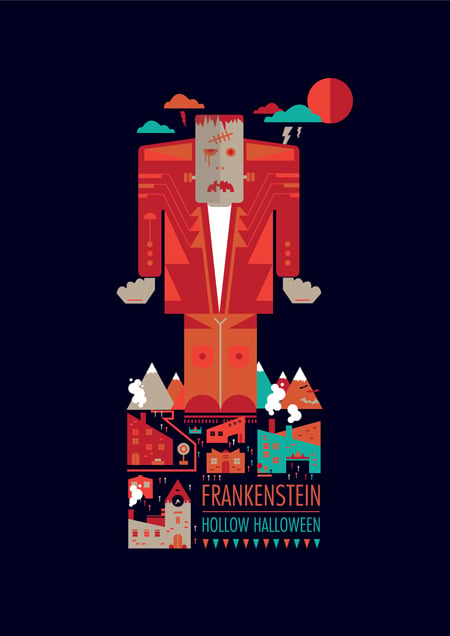 Q What are your main sources of inspiration?

One of my most bizarre ideas for a personal project came from a dream I had, where my local town was completely transformed into buildings, shaped to resemble the Helvetica typeface, which influenced the concept of my piece 'Helvetica City' for some,
a dream come true, for others. A nightmare. My other sources of inspiration include; music, magazines, art blogs and day to day oddities I stumble upon throughout my life. I'm a sucker for electro jazz, old school cheesy 80s rock music and the 90s boy band era e.g. Take That & New Kids on the Block (a guilty pleasure, if you will). 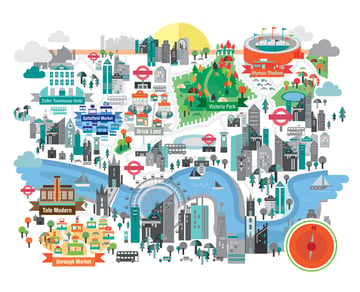 Q If you had to, how would you describe your style?

I'd say a mixture of geometric art combined with a technical yet minimal design approach to the graphical elements in which I create for a design piece.

Definitely on the modernist path rather than post modern. Generally anything that pieces together, have a balanced structure, scaled composition and intricate line paths is what best describes my style! 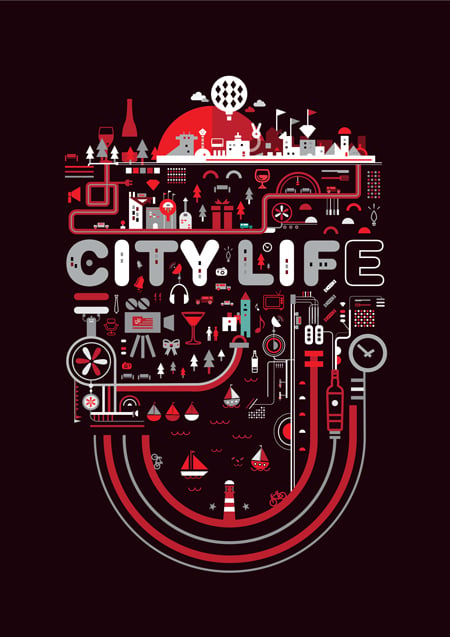 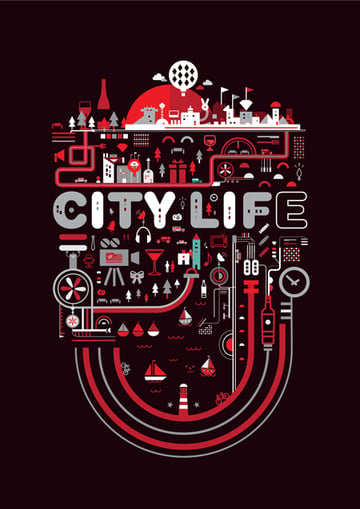 Q You've got an impressive portfolio, one of my favorites are your Royal Mail stamp illustrations. What was your inspiration for the series?

The RSA stamps are a series of illustrations made to promote British inventions. I found British machinery and transport to be best suited as a main idea. It was probably the most intriguing brief I have ever worked on, as I learned a hell of a lot about the inventors who crafted such fascinating engineering. 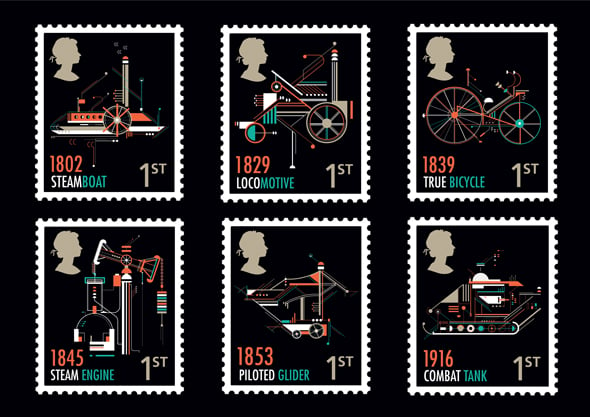 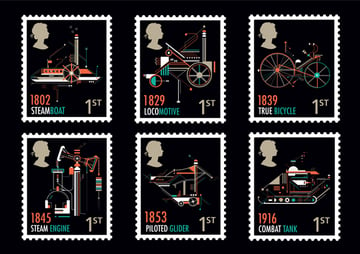 Q I love your typography bird series... do you plan to create more? What was the main inspiration for the series? It includes a lot more typography than your other pieces, why is this?

I am a big fan of aves, the illustration mixed with typography was something I've always wanted to delve and experiment with. I intend on releasing more of these illustrations in hopes of showcasing these beautiful endangered creatures as well as raising awareness.

I'm also working on a side project with a good friend of mine, where we'll be creating a series of designs in which we will wholesale once we've managed funding, I won't go into details regarding what it'll be exactly, but watch this space- it's going to be huge!

Q You're currently working on a mobile app called Penguini. Can you tell us what this is all about? What part do you play in the project?

Penguini is a unique puzzle-solving/adventure game where the user has to navigate the world to help our young protagonist Penguini escape from the zoo and return him back to his home in Antarctica where he can be re-united with his family and live a peaceful, long, and prosperous fish filled life. The game will be available for Android and iOS by this fall. I am one of the leading artists and interface designers for this project, by far one of the more challenging approaches in my career as it is my first time building a gaming application with a team of like minded inspiring developers.

Q If you could work for any client/brand in the world, who would it be and why?

Nike, I've had the privilege of working for them in the past and they're a flamboyant bunch! They connect with you as a designer and give you the freedom to explore rather than tying you down with tedious commercial ideologies.

Q Thank you for a great interview, is there anything you'd like to share with us or final words for the Vectortuts+ readers?

A big thank you to Sharon for interviewing me on Vectortuts+, and obviously to the people who have helped me where I am today, including my followers and supporters throughout the social platforms I showcase my work on - much love!

Petros Afshar on the Web

InterviewsVector
Did you find this post useful?
Yes No
Would you like to provide feedback (optional)?
Cancel Submit