Interview with Paul Brown, aka Roctopus

Paul Brown (Roctopus) is a talented illustrator. He has a passion for creating vector illustrations in multiple styles - some of which are simple, quirky, and quaint, and others full of energy, detail, and depth. He's transformed his involvement in Hip-Hop and graffiti into a wider appreciation of illustration and the arts. He's also tackling motion design and taking his vector characters into Flash. Let's get to know Roctopus!

1. Hello Paul, please tell us a bit about yourself. Where are you from, what training do you have, and how did you get started in the field? How long have you been illustrating and animating?

Hello, I live in the UK and have finally settled down with my family in a small town about 30 miles from London. I am self taught and first started seriously illustrating around 20 years ago when I was into the Hip-Hop scene. My passion for characters and lettering stems from there, and even though I am not involved in that scene anymore, it gave me a great appreciation of line structure and form.

Some of my early graffiti inspired works can be seen on my FLICKR stream. I first started working on a Mac around 13 years ago and I found it really easy to pick up using Photoshop, Illustrator, Dimensions, Quark and Raydreamstudio. I was using a Macintosh Quadra with 4mb of RAM - state of the art!!

I did a little 3D animation in Raydream studio way back, but didn't really pursue that for long. I only started to experiment with Flash animation at the start of this year as I had some spare time and it seemed like a logical progression from my vector based artwork and since Adobe took over Macromedia I got the impression the interface in Flash was more tightly integrated with illustrator which helped.

2. Every time I load your site my son dances around to the one man octopus band - rockin' out. Could you tell us a bit about your Roctopus creative identity? What's the story behind that and how is it working as your brand identity?

Ha ha yeah, I am glad your son likes my rockin' Roctopus! I am always trying to think of new quirky identities and characters and Rocto just popped into my head one day last year, after sketching the character out i liked it so much I decided to assume the identity.

Initially it was just a vector illustration but I had it in the back of my mind it would be great to animate, I suppose that was one of the things which lead me to start using Flash. That was only my 3rd flash animation, the first was the Vectortuts+ spinning beach ball tut, then I went straight into my 'Destiny' 60's inspired funeral procession tackling a walk cycle and looping, so jumping in with lip and instrument syncing was quite a challenge.

3. I notice a classic British flavor in many of your illustrations? From Marmite to double-decker buses. Is this derived from your environment? Are there particular artists that have influenced your work as well?

Yeah, I am very proud to be British we have a great melting pot of creative talent over here whether it be art, music, writing, architecture or fashion its always evolving, that coupled with our wonderfully diverse multicultural society it's like nowhere else in the world.

I lived abroad for a while and often think back to the things I missed and remembered about being back in Blighty, I suppose that's what initially inspired my British flavored illustrations. Its nice to draw on you own experiences too and I really enjoyed illustrating the Morris Minor, Routemaster bus, Marmite, a Funeral procession, Post box, Fox and the Clock tower at Westminster.

As far as other artists I respect and am influenced by there are many. When I was growing up I loved the graffiti work of Mode2, Daim, Loomit, Dondi and the Cheech Wizard comics by Vaughn Bodé.

In the traditional medium I love the work of Jenny Saville I saw one of her obese women paintings at the Tate liverpool it was so beautifully conceived and painted. Paul Wright the way he forms shape and light using bold, thick brush strokes is great. Matt Small and Connor Harrington, I suppose these both appeal to me as their art to me is an evolution from graffiti and stencil art.

Moving to more graphic style art I like Richt, Guy McKinley, Hylton Warburton and Theory one to name but a few. 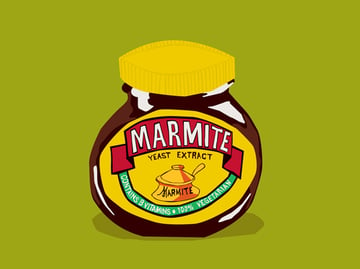 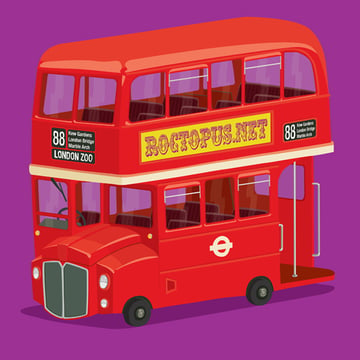 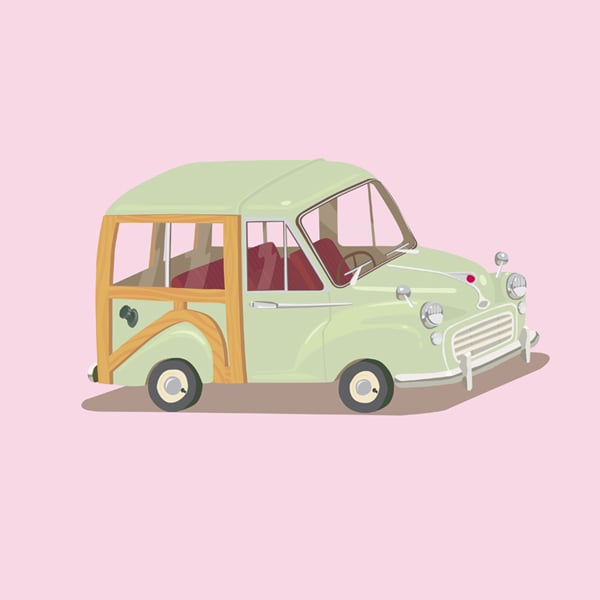 4. Could you tell us a bit about your fast and quirky style you've been creating numerous illustrations in lately? What are the benefits to working in this style?

I suppose this is my natural style, It's a style that I can produce illustrations fairly rapidly. My method of working is to reference some pics on the web then just sketch, scan and vectorize trying to keep everything a bit wobbly. I really enjoy producing vectors this way as I often get caught up in producing really complex detailed pieces, which take ages to complete, so these are great to knock out and see a finished result fast. 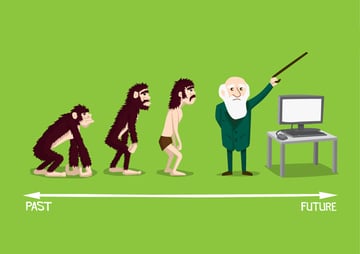 5. Looking at your tutorials "How to Create a Golden Mechanical Owl in Illustrator - Vector Plus Tutorial" and "PLUS Tut: The Creation of Robot Mayhem in Westminster" here on Vectortuts+, I notice how you experiment with different tools and looks. Do you think you'll continue to experiment with different vector techniques and styles, or do you see yourself starting to focus more on one style of work?

I get bored really easily and like to challenge myself, mixing up styles is natural to me. I also try to keep up with all the features in Adobe Illustrator and sometimes I will do an illustration just to nail a new technique, Gradient Mesh, Opacity Masks, Masks, Feathering the Blend Tool, etc.

I have been using the software for 13 years and still learn new things all the time. With the two Vectortuts+ tutorials, I tried to pick Illustrations that would teach the best Illustrator techniques I had learned over the years to your readers, I tried to think what I would have liked to have been shown, and I put that in there. 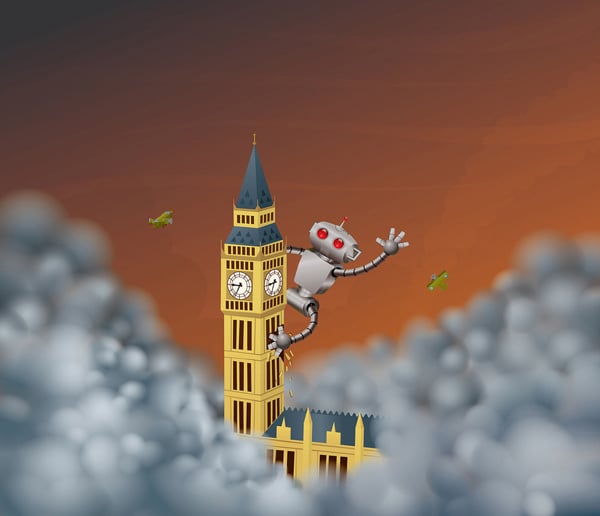 6. Could you tell us about your collaboration with Mr. Chompins? What was your role in the project "ChompxRocto"? How was it working with another illustrator and trying to blend your approaches and styles into one artwork?

Wow, this was such a great collaboration for me. Mr. Chompins suggested a collab and I jumped at the chance. It was a no brainer for me to try and bend my style to fit into the surreal world of Mr. Chompins and I started the ball rolling with the stripey, furry, trunked monster pedaling on top of a zeppelin.

I then put the file on FTP for Mr. Chompins to add to over in California. I think the file went back and forth across the atlantic about 6 times, it was really exciting for both of us each time we saw what the other had done and we were both amazed how well the piece came together in the end, it looked like we had planned it! 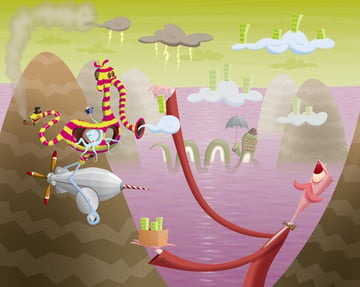 7. Could you tell us a bit about your animation art workflow? Do you use Illustrator to create the art and then jump over to Flash to animate? Or are you using another workflow to create these animations? What makes you to want to work on animations and do you see yourself doing more of this kind of work?

As I mentioned earlier moving onto using Flash for vector based animation was a natural progression. I always use Illustrator as a start point and break my characters into parts and convert the parts into symbols before importing them into the Flash library. I find timeline based animation comes quite easily ,however action scripting is a bit more of a challenge for me and has caused a few headaches!

I do plan to produce more animations and would like to explore parallax scrolling and more mouse over event action scripting on my next pieces, I love the and CBBC web pages with mouse over events on various characters. I would also like to produce a Flash game and have started working on some concept illustrations in my fast and quirky style...

8. To what extent is keeping a sketchbook, taking photos, or any other creative approach essential to keep your ideas flowing and yourself growing as an illustrator?

I love sketching and really enjoy laying out my initial ideas in pencil or biro. For my more complex pieces I can spend hours on the sketch. I spent a long time refining my Roctopus Tentacle Lettering before scanning and vectorising, as I knew it was going to take a long time for me to vectorize because I was going for a photo realistic look.

I sometimes post my sketches to my FLICKR account to give an idea of my working process. I am just getting into photography and recently got a canon 450D/Rebel XSI camera, but have not really got to grips with it yet, it is on my long 'to do' list! 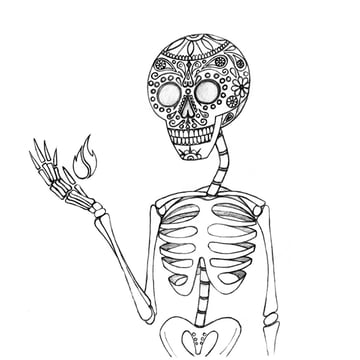 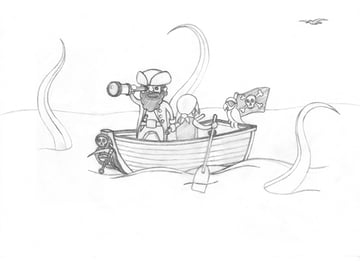 9. Could you tell us about the development of your work "Pirates & the Kraken," what workflow did you follow, how long did it take to make, and what did you learn from working on this illustration?

"Pirates & the Kraken" was conceived from me wanting to produce an illustration with a little story contained, at the time I really wanted to do an illustrated children's book, but didn't have the time so this was the next best thing.

I started out with a sketch, scanned it and took it into Illustrator. I was honing my techniques on this one and tried to make the boat look as three dimensional as possible using gradients and also paid particular attention to the transparency of the tentacles as they disappeared into the depths (a technique I also used on my tentacle logo). I was pleased with the concept of the grim reaper for the mast head, as the viewer can imagine the crew are about to meet their maker! 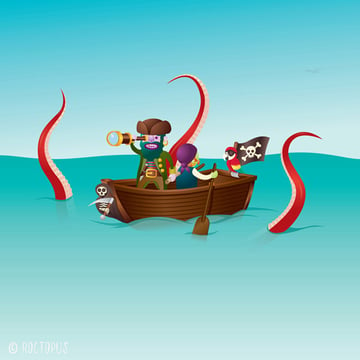 10. Thanks for the interview Paul! Is there any advice that you'd like to give aspiring illustrators and designer who are working hard to grow professionally?

For me illustrating is my passion and I do it whether anyone sees it or I get paid for it, so if you are like me just keep doing what you love. I also enjoy hooking up with other artists from around the world, checking out all kinds of artwork be it on TUTS+, Behance, Flickr, twitter, the web, galleries, magazines, books or on the street. Just keep plugging away and push yourself to learn new techniques all the time as 'standing still gets you nowhere!' 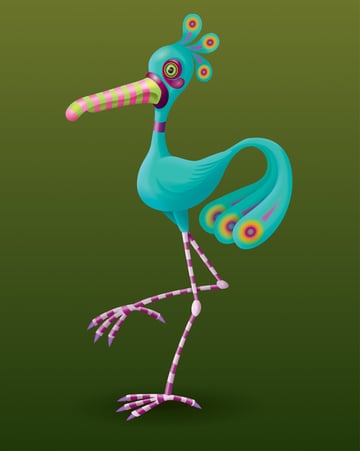 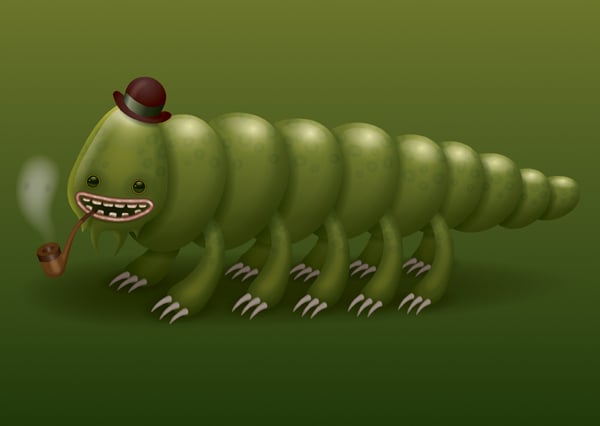 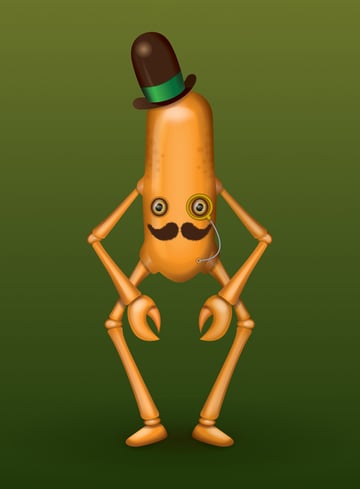