Interview with Kate McInnes, aka LoungeKat

Kate McInnes (aka LoungeKat) creates a variety of design and illustration work. She is best known for her sensual vector female characters, though also creates logos by day, and works on various creative projects in the evening. She's participated in numerous illustration shows, is a practitioner of "Craftism," and has partnered-up on successful collaborations. She enjoys what she does and it shows! Learn why everyone loves LoungeKat!

1. Hello Kate, please tell us a bit about yourself. Where are you from and how did you got started in the field? What formal training do you have, or are you self-taught? How long have you been illustrating and designing?

I'm from Melbourne, Australia, I have a Bachelor of Multimedia Design and a Postgraduate degree in Communication Design. Everything I know about Illustration I taught myself. Believe it or not - I failed a unit of digital imaging in university! It's funny how things change. 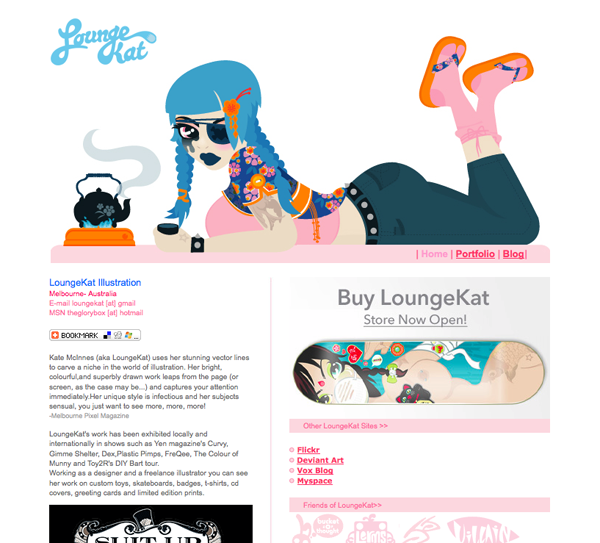 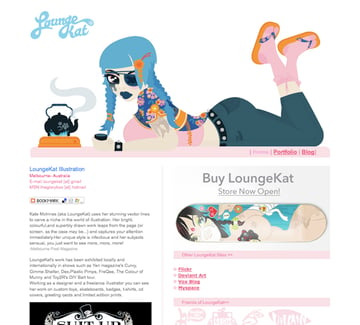 2. What is your typical day like? Do you currently work for a company, freelance, or some combination thereof? What's your ideal setup and are you currently living it?

My typical day is - Roll up to work at 8:00am. I work in-house for a software company creating the marketing and graphic assets, print design, web and icon design and managing the everyday workings of the web and creative department.

After a full day of design I get back home at dinner time, grab a glass of wine, water the vegetable garden, have dinner, turn on the laptop and work on my LoungeKat tasks - sometimes it's freelance Illustration, sometimes it's tutorial writing, today I wrote a brief for a community project I'm running for Blood Sweat Vector and later tonight I will pull out the sewing machine and finish some LoungeKat Christmas stockings I'm making for an art market next week.

I get to bed around midnight and wake up at 6:30am the next day to do it all again. The weekend is much the same but I don't have to leave the house.

3. What pulled you toward vector graphics as an artistic medium? What are your favorite aspects of working with vectors? What other mediums do you love working in?

After I graduated from Multimedia I was still working my crappy part-time job. I was spending entire days bored out of my mind, when I got home I was so frustrated with my situation I would go fire up the computer and browse the internet for inspiring projects. Around the same time I became a member of Deviantart - I wanted to upload my pencil drawings but I was really broke and didn't own a scanner, to get around this I would redraw my sketches straight into the computer using Adobe Illustrator.

I love the way that vector scales - as a designer I'm very aware of specifications - I love that it can be as small as a stamp or as large as a billboard.

I use Photoshop and Illustrator 90% of the time, when I'm using Photoshop it's for web and icon design and I'm using vector shapes anyway - so I guess I'm drawn to vector. 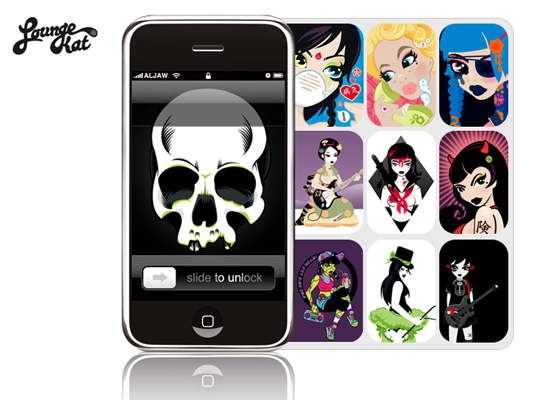 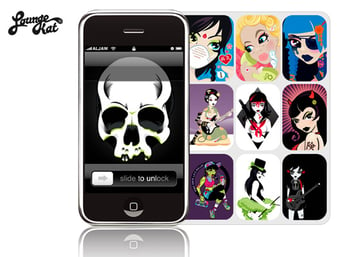 4. Could you tell us about your collaboration experiences. Is there a project that was particularly successful because of a collaborative effort? What was your role in the project and who did you collaborate with?

I collaborate all the time, I strongly believe that people are more creative when they work with like minded people. I regularly work with Sean Kelly (Bucket'o'Thought). We have a similar way of drawing and are very hard on each-other during the creative process. Without Sean on my case about missed points, bad masks and too many layers I don't think I would have progressed professionally.

The most complicated collaboration I've undertaken was the piece "Fight Like Rabbits" Sean and I worked together on the layout and combined the sketches in Photoshop. I illustrated the body of the woman first, then Sean added most of the rabbits, then we took a copy of the file each and finished our parts and brought them both together at the end. It seems like a crazy way to do thing, but we somehow made it work in the end. The trick is to stay calm and everything works out OK.

5. What's been your most challenging project so far in your career? What was challenging about it? And how did you overcome those challenges?

Adapting my Illustration style for the software industry was a challenge, I had to learn an entirely new way of rendering images to give them the polished icon look. It took over a year of practice until I was confident in the style. 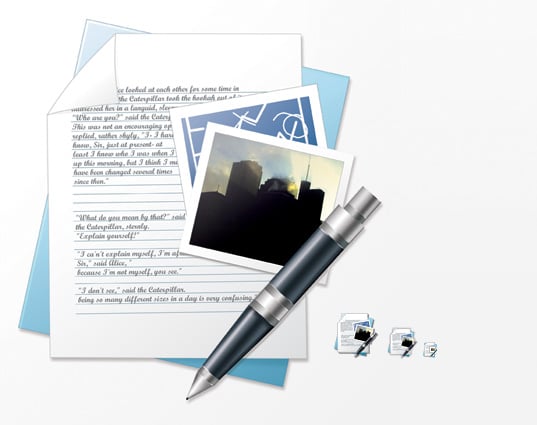 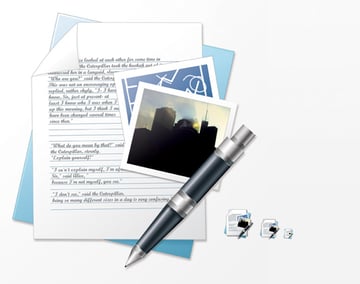 6. How would you define your illustration style? What subjects regularly captivate your attention as an artist? Where does your inspiration come from? Are there any must see websites you frequent?

It's a mix of the female form and pop culture symbolism. My work tells stories through objects placed throughout the image, some obviously need some explaining. Like with my icon work there's a process of research before each image is made.

My inspiration comes from everywhere. I used to spend hours on ffffound and design blogs. These days I try to use my imagination more - I've seen enough images for a lifetime of procrastination. A must see website for vector fans is definitely Bloodsweatvector.com. 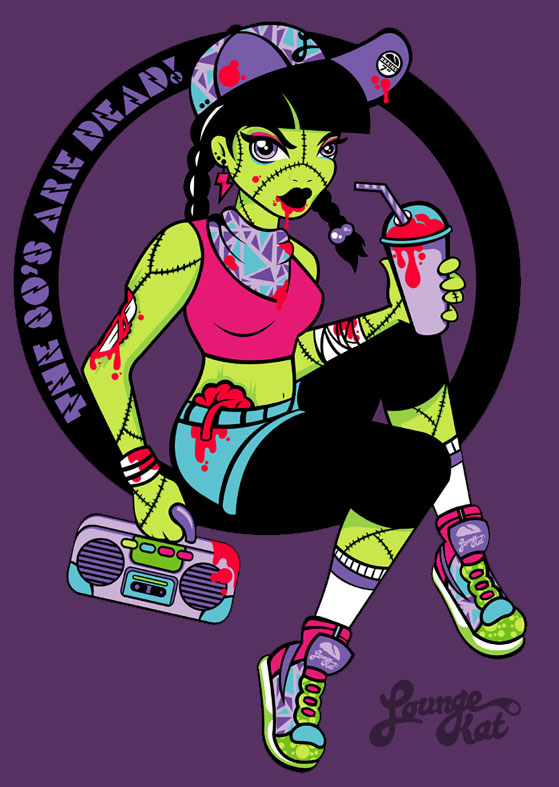 7. Could you tell us about Suit It Up? What is the event? How long has it been running? What's your involvement with the event? And what's awesome about it? Are there any other art shows you showcase your work in?

Suitup was as exhibition Sean and I had in February 2009. We curated 19 Australian artists (from comic, street art and illustration backgrounds) working in groups to make a set of playing cards. I took the role of online marketing and PR, artist relations and design - Sean and I worked together to illustrate the Joker cards, we also funded the entire project from our savings. Looking back, I'm really proud that we made it happen. Opening night was huge! We had well over 500 people through the doors, served 24 slabs of beer, took 300+ photos, and sold plenty of art.

I've had my work in many shows over the years such as - Yen magazine's Curvy, Gimme Shelter, Dex, Plastic Pimps, FreQee, The Colour of Munny and Toy2R's DIY Bart tour and most recently Blood Sweat Vector's first exhibition at the West Berlin Gallery (Germany). 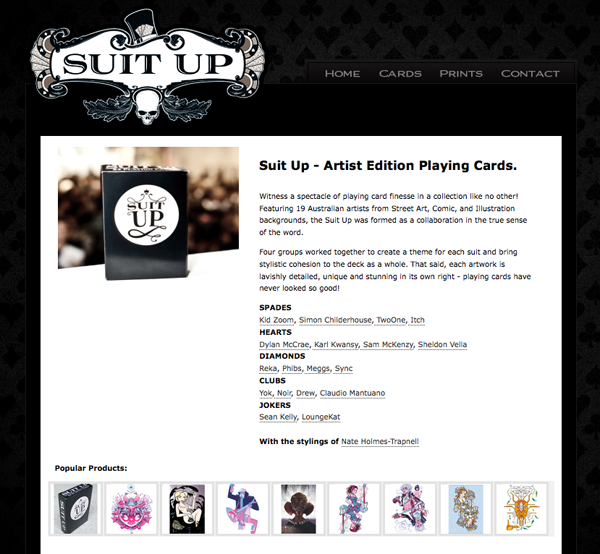 8. To what extent do design and formal principles impact your art? How much is guided by playful creativity, experimentation, and discovery?

I've found that my illustration has more balance now that I'm spending the majority of my time designing. Icon work has taught me much more about lighting and perspective than I would have learned from my regular Illustration style.

I had more time to be experimental and creative when I first started out as an Illustrator, I haven't drawn anything personal for over 3 years. I don't think this is a good thing, just a necessity at the moment.

9. Could you tell us about your love affair with Craftivism and your "Choose Your Own Rebellion" cross-stitch pattern that was featured in Mixtape? How often do you pick up various craft tools and create something outside your normal vector workflow?

I love Craftivism! I learned how to sew and craft when I was young, but gave it up for art. I'm really excited to learn that craft is popular again! Craftivism is craft used as a form of activism such as anti-capitalism, equality or environmentalism.

I had the idea for "Choose Your Own Rebellion" during a rant about old fashioned feminists and how they saw everything crafty as a form of oppression. The greatest form of rebellion is to be yourself, no matter what other people say or think. A year later I met Justine from Mixtape at the Stitches and Craft Show, I mentioned that I was an Illustrator and took a business card. That night I emailed her the pattern and it made it into the magazine.

I do non-vector stuff, like making accessories quite often, as I sell bits and pieces though my online store and in local shops. 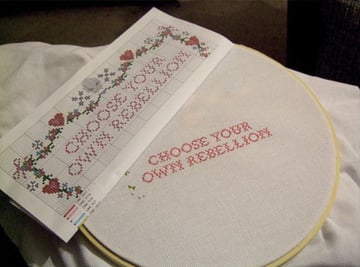 10. What are your plans for the future? Any creative work coming up, or that you're currently working on, that you're excited about?

I want to expand on my LoungeKat brand. I'm interested in textile design and hope to produce a line of fabric. I'm currently working on pieces to sell at market, merchandise for Blood Sweat Vector and a new folio site. I'm excited about taking a day off. 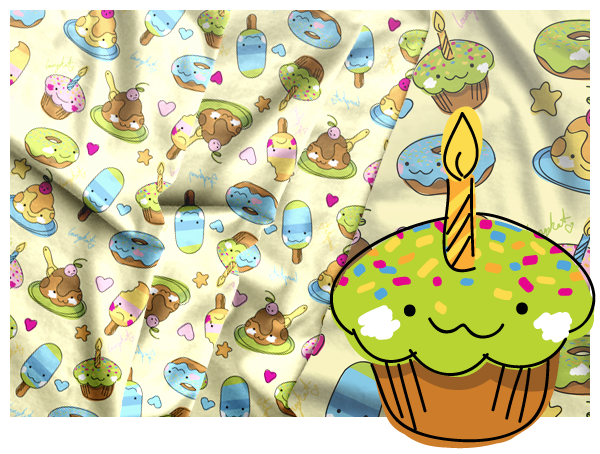 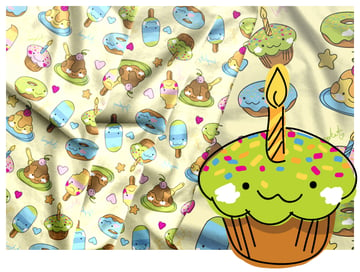 12. Thanks for the interview Kate! Is there any advice that you'd like to give aspiring illustrators and designer who are working hard to grow professionally?

Don't copy other peoples work, listen to constructive criticism, engage in the community around you and be persistent. 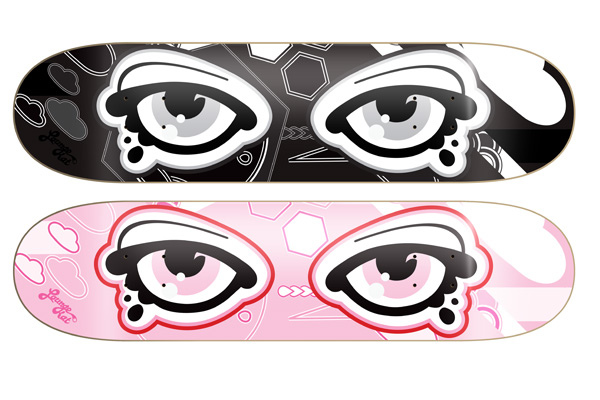 Kate (LoungeKat) on the Web