As one of the members of the worlds largest design collectives The KDU, João Oliveira strives to further advance his skills in designing. With only three years of design experience João has already perfected his own style of creating art.

A lot of his work features his signature style of simple 2D shapes mixed with vivid colors. He describes this style as being very time efficient. If he only has a limited amount of time, he can still quickly make a visually stimulating design for his client. In this interview, João talks about his involvement in the KDU, as well as where he looks for inspiration. So lets dive into this great interview!

Hello, I'm João Oliveira, a Portuguese designer and illustrator based out of Porto, Portugal. Like most of the people in this area, everything started from my childhood. I've always been a creative person, loved to draw and look at illustrations.

I was educated in science until college where I decided to take a degree in communication design, that was in 2006. In that year I discovered Photoshop and started designing web layouts and logos for various small clients, which evolved into digital illustrations and later graphic design.

2. You are a member of the The KDU, which is the world’s largest design group. How exactly did you join and what does membership with The KDU entail?

It all started in 2008, one of The KDU members and a creative consultant introduced me to The KDU's president – David Gensler, who was already familiar with my work and I got accepted as a member. Since then I've been collaborating and receiving direction for David on various projects and exhibitions. Being on this collective is really useful for someone who's starting as a professional in this field. It gives me a lot of opportunities to have my name on various publications, exhibitions and shows, and to work with known brands. 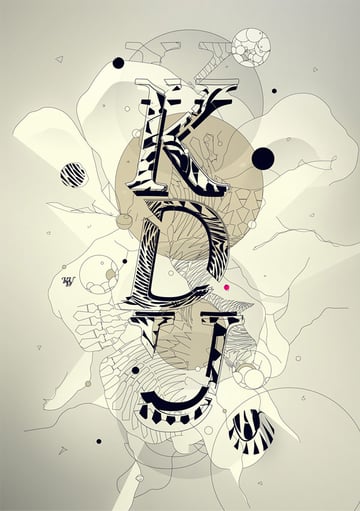 3. "Dictionary of Received Ideas" is a very interesting and original project that you have recently done. The incorporation of typography and drawn illustrations make it very unique and unseen by other designers, so can you tell us more about this project and what exactly you wanted to accomplish with it?

It was a design project made through college. The objective given to me was to make a full redesign of that book. The original book is like any other dictionary: a list of words and their definitions, so I wanted to give it a fresh new look in order to make it interesting to the viewer, without changing the original classic theme, since it is a French brook from the 1870's.

To make it more interesting I decided to make a non-linear layout, use big typographic compositions and drawn illustrations taken from medieval and ancient books. Since it was a college project without any pressure from a client, I had the freedom to cross the line and experiment as much as I wanted, that's what I did. 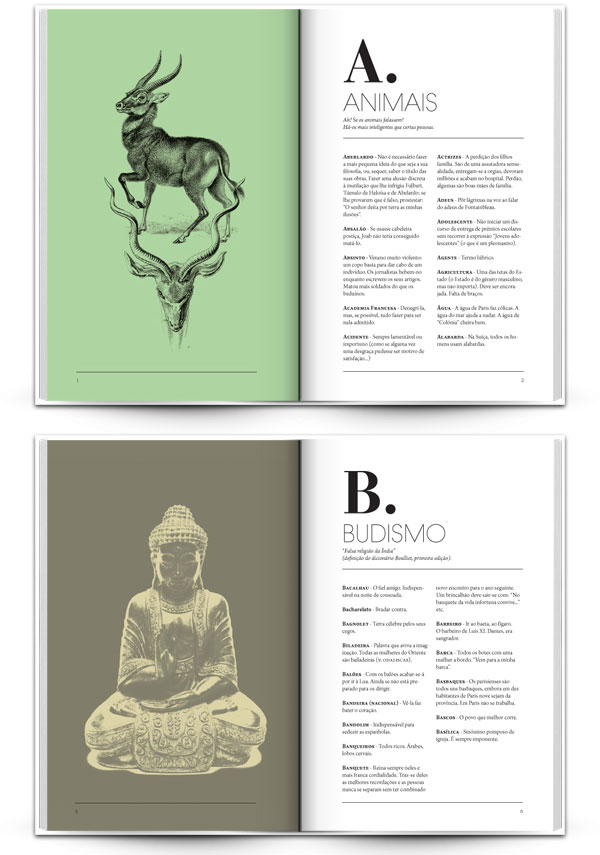 4. The simple 2D shapes style is featured in a lot of your work including "Nice things are done slowly" what exactly is so appealing about that style to you? Would you say you have mastered this technique? If so why or why not?

I really like the bold shapes and dark colors contrasting with thin, detailed lines and vivid colors, it's a style that I really like because it is extremely easy to build and the outcome is always unexpected, allowing me to make a full illustration in a small amount of time and, if needed, having variations of it without spending a lot of time. That's one of the directions I chase when I develop a new technique: the time and diversification factors.

The technique used on my Adidas, Reebok, NFL and Omega Code pieces is also an example of this, it requires a low amount of work and time to create a really complex and intrinsic illustration, which is very important when I'm given deadlines of 48 hours or even less. Can't say I've mastered this technique since I still have a lot to learn and experiment. I'm only starting and I plan to develop it much further. 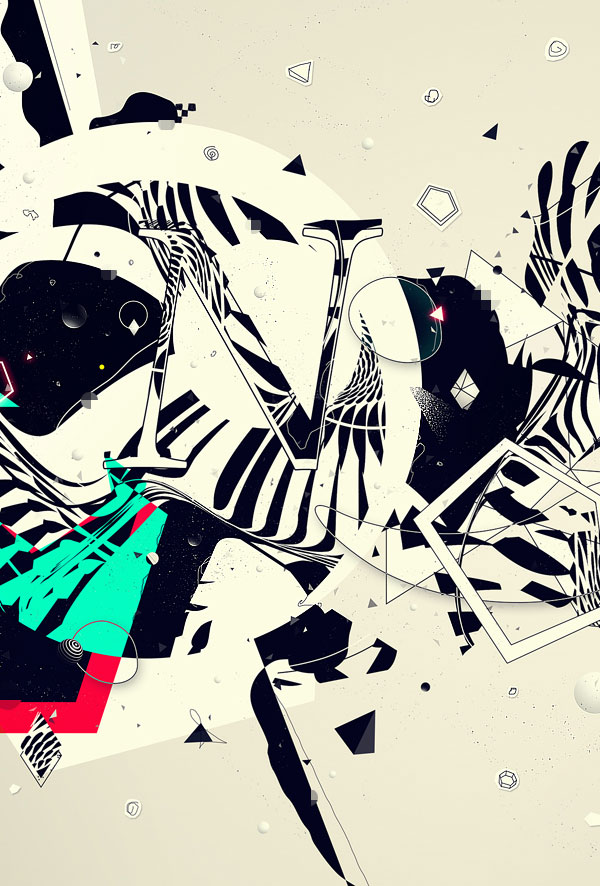 5. "Alchemy" is probably one of the more visually stimulating designs in your portfolio. Please walk us through exactly how you created this stunning illustration and what you wanted to go for when you started making it.

It started as some kind of sequel to the previous illustration, "Nice Things are Done Slowly." I wanted to do more of the same but soon I got bored of it. The base composition and shapes are very similar but it progressively became more and more complex, I kept adding particles, brushing and drawing random lines and doodles until I got that final look. It is also an attempt to get rid of the triangular and edgy shapes that became really trendy really fast, I wanted an organic piece, full of energy.

6. What do you think your biggest challenge was in terms of designing? Have you overcome this obstacle yet? If so tell us how.

I'm always trying to achieve a unique style that differentiates me from others, that's my biggest challenge and I think I'm going in the right direction. Most of the people already refer to my style as being unique and different but I still have a lot to overcome. I'll never be satisfied and that's a positive thing. 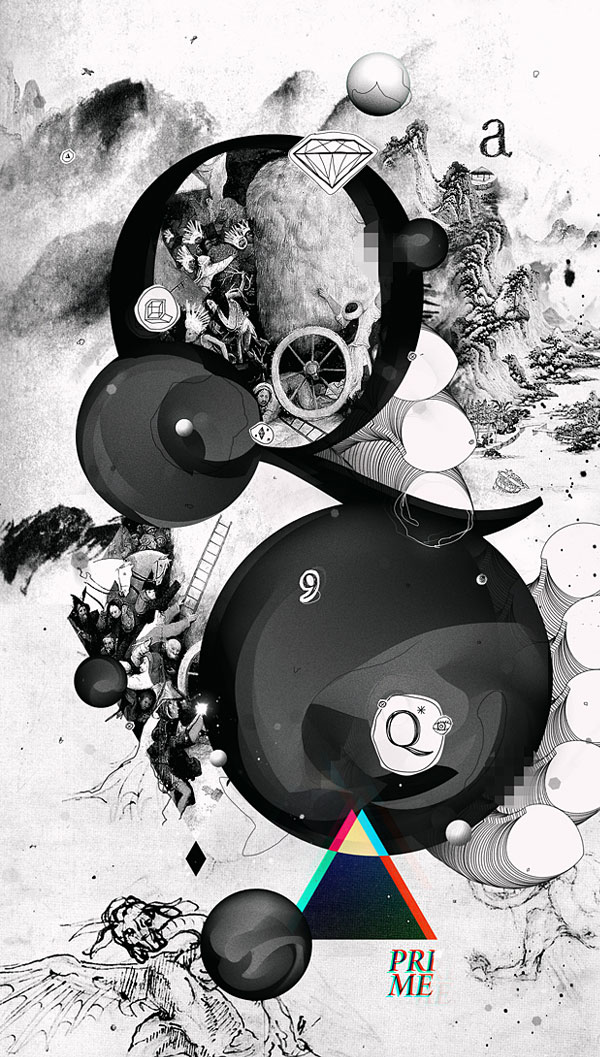 7. When you are low on inspiration where is a common place that you turn to?

I really like to look at design related imagery, a book cover, a poster, a typographic arrangement or a good typeface, anything from music to retro stuff like B-movies, music band posters or even illustrations and typography from medieval books can be a source of inspiration.

Thank you for the interview, was a pleasure and remember to have fun in what you do! 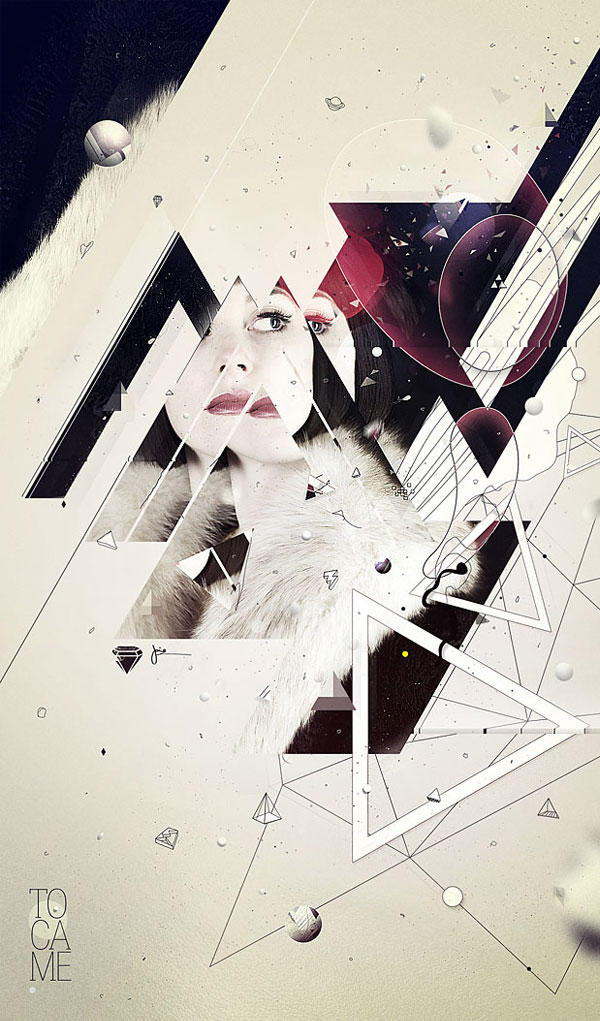 Where to find João on the Web 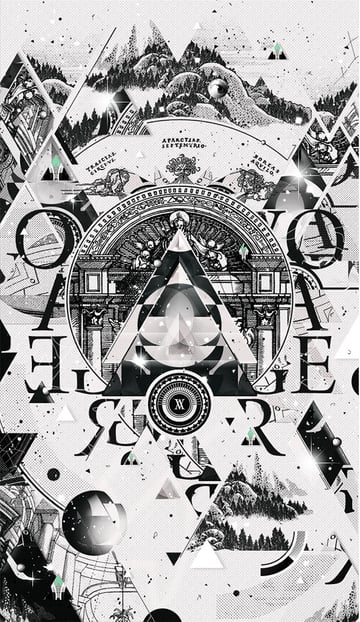