Greg Martin is an amazing digital illustrator that is currently living in Portland Oregon. His themes are focused on celestial art and space scenes. In this interview, Greg gives seasoned advice on how to become successful with using Photoshop. Greg also takes amazing pictures, learn how he uses Photoshop for his photography. Now lets get into this interview.

1. Welcome to Psdtuts+! Please introduce yourself, give us a brief bio, tell us where you're from, and how you got started in the field.

My name is Greg Martin, I'm a born-and-raised Pacific North westerner from Seattle, now living in Portland, Oregon. I've been drawing ever since I could pick up a pencil or crayon, and made the transition to computers as my primary mode of artistic expression about ten years or so ago. This transition was inspired largely by the fact that it is fairly difficult to draw celestial artwork in pencil or paint. The computer seemed made for it, and early on that's all I wanted to draw.

It goes without saying that I'm a sci-fi nut as well, and intensely interested in science and nature. My celestial artwork phase came to an end once I fell in love with photography, and I've been balancing all manner of illustration and photography ever since. Without a doubt learning photography has strengthened my illustrations immensely, and the line between the two becomes increasingly blurred. 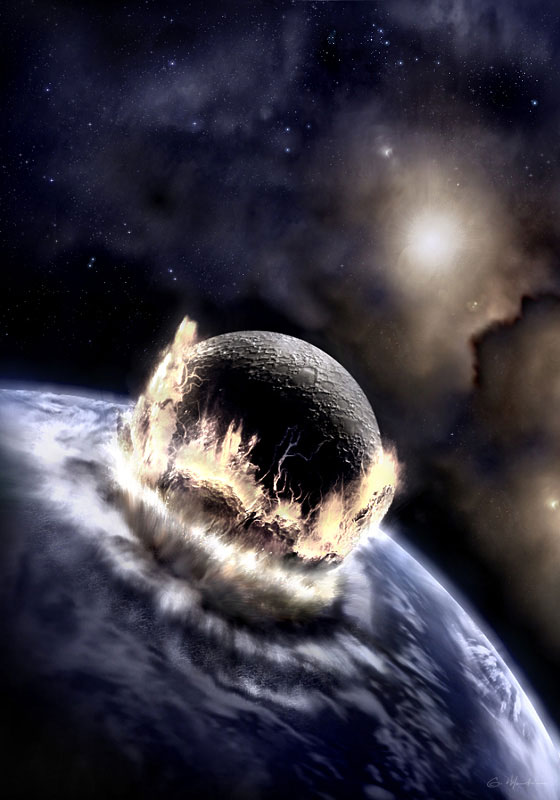 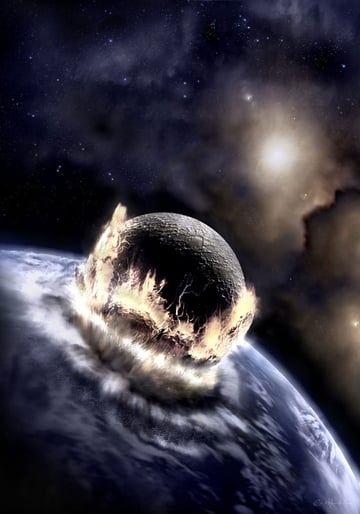 2. When looking at your designs I cant help but notice that you like to stick with the Space theme. What exactly draws you into doing these types of illustrations?

Space was something I really wanted to draw when I started out, and I worked at it incessantly to become as proficient as possible in that subject matter. To be honest, most of the illustrations I have out there today are several years old. Today I'm more of a project-oriented illustrator, and am working on expanding my landscape skills -- space is fun, but nobody knows if you've gotten it wrong because nobody has seen what you're painting before.

That allows for a considerable relaxing of one's standards, and I don't want that to happen. Landscapes, however, are something people can generally relate better to, so you have to work and get things right.

3. How does Photoshop factor into your amazing photography?

Photoshop allows me to take what I get from the camera and tweak it to reflect perfectly what I want to relate with the image. I use adjustment layers, complex masking and various other tweaks extensively to achieve the perfect range of contrasts and color for my particular style. I don't ever draw or manipulate the image beyond contrast or color, however... as much as I eschew traditional photography rules, I do believe that once you edit the scene to include things that weren't there, it's an illustration or photo manipulation and should be labeled as such.

Photoshop is also essential on a more basic level for my photography. Most of my photographs are multi-image composite

panoramic, containing anywhere from three to over twenty images that are stitched together into a seamless whole. This leads to some rather large files (my latest panoramic from Crater Lake was a whopping 24,000px wide) and more importantly, excellent quality prints. That's especially important to me because while I don't ever put my own illustrations up in my home, I do put up the photos -- and the bigger they are, the more you feel like you're there again.

4. What are some essential techniques that someone should understand when trying to design an illustration of space?

My illustrations usually come in two flavors: painterly and constructed. On the whole, I'm a

constructor artist, meaning I work better with shapes and assets than I do strictly painting outright. Real painting is also slower, which can be frustrating while a piece is in progress, but immeasurably rewarding once it is completed. Constructing, on the other hand, involves getting shapes and assets assembled and then basically tweaking and photo-manipulating them as needed to produce a coherent whole. This usually makes full use of multiple layer and group masks, adjustment layers, and a wide range of filters used as delicately as possible in addition to hand-drawn elements. If I could recommend one trick to master, to anyone, it's learning how to make the best use of the

quick mask tool and it's powerful application to layer masks. So many people I've talked to never quite get that feature, and it's amazing.

Another fun technique is learning how to bend the various filters to your specific needs... filters used outright are usually spotted and, let's be honest, scorned a bit. It's like if you painted a painting with nothing but pure colors, you'd be missing some level of depth and richness. The same thing applies for filters. Once you understand that they're not magic make cool tools, but rather just another way of manipulating pixels, you can use them to great effect. It's worth playing around with them to better understand them.

This kind of goes along with something I've been saying to many people ever since I somehow became known... You simply must know your software intuitively before you can really express yourself. I suppose that goes for all art forms one hopes to create with the computer. If you're busy thinking about how to get a certain effect, you're not thinking about your composition, scene, or concept.

5. What would you say is your favorite design that you have created? And please give us a small look into how you came up with the idea.

I hate to say it, but my favorite designs are actually hidden right now... I've got a large celestial art exhibit in the works that'll hopefully be released to the public by the end of 2009. For now I'll say my favorite work currently in the public eye is my painting, "Riven." It's one of the best examples of an evolving painting in my current collection -- there wasn't an idea, just a need to draw. This is one of the attractive things about celestial art, in the absence of rules you can basically go abstract and end up with a pretty decent result.

It began as most paintings do, a pure black page. Once I got some color down on the page, I could start to see some light, and worked to tweak that out and shape it. Lots of random brushwork and smearing, as well as color shifts and adjustments. I really have a passion for light, the idea that I'm playing with an element of light on the screen and working to surround it with an environment is very strong to me. In the end, Riven is as you see it. I've actually documented the steps in a walkthrough on my web site that goes into more detail about my specific thoughts throughout the piece, I encourage you to take a look. See the articles and walkthroughs section of my site. The basic take-away from all this is that the idea behind "Riven" was that there was no idea. Just light. 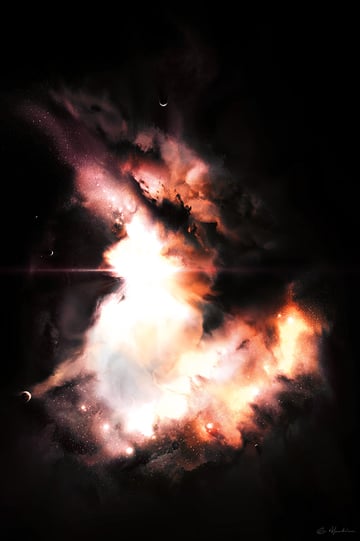 6. "The Silver Legacy-2" is an illustration with amazing imagery, can you tell us about its inspiration, as well as the process to create it.

The second concept piece for The Silver Legacy was a collaborative piece with Jessica Stover. Artistically it's all me, but conceptually the piece represents a three-month conversation back and forth between myself and Jessica. The work is based off a scene from one of her screenplays, so the challenge to create it was based more in making sure a good dialogue existed to transfer her ideas to me than in actually drawing. That being said, this illustration was a massive piece of work. It was made for a 250dpi 16" by 28" print, so the image file itself is pretty massive, even for me. The image itself is about 50/50 photographic assets and hand-painted elements. The fellow in front, for example, is hand-painted, but the grass he's standing in came from some photos of the English countryside.

The entire concept began with small-scale concept sketches as I worked with Jessica to set the scene. Working small was imperative since there was a good deal of aligning that needed to be done first. Once we were both on the same page, I moved to full-scale and began drawing in earnest. I also did something I've never done before -- I painted almost the entire thing in black and white first, adding color later. This was to make sure I was paying full attention to the light in the scene, especially since colors at dawn aren't that pronounced anyway.

Once the majority of the scene was painted (the mountains took about four complete tries to get right) I started overlaying color and photographic details. The valley floor, the grass, and various vegetation all came from photographic assets, some of which I took myself. The vegetation is a combination of Google images and photos from a trip I took to Hong Kong. The sky is pure Portland. Final touches were level and color balance adjustments, some of which took place at the print shop. And that's it.

7. Thanks again for providing Psdtuts+ with this opportunity at interviewing you, any final thoughts? What would you tell other designers that hope to be as good as you one day?

Two things. One (and this is for pure beginners): Photoshop is an amazing tool, but so is a brush or a pencil. If you haven't learned how to draw, having the brush or pencil won't help you. The same thing goes for

Photoshop. It's incredibly hard to be an artist without taking the time to learn how to be an artist. Keep drawing. Trite, yes? But oddly enough, very true. I am not

professionally trained in illustration or photography -- the art classes I've taken can be numbered on one hand. But I love drawing, and I love photography, and so my training has been over ten years of working at it and evolving.

Two: Learn how to create compositions and control light in your images. I've seen so many paintings that would get an A on technical execution, but failed miserably as compositions. And it's hard -- possibly one of the hardest things to learn. But sooo important. Unfortunately I can't provide pointers for that, its something one has to develop on their own. Look at your favorite paintings and think about why the image is so especially compelling. Art is so much about understanding why things around us look the way they do. Don't forget to look around and think about what you see, life is a bit easier to appreciate once you start looking with eyes open.

Where to find Greg on the Web