These fortified structures that popped up throughout Europe and the Middle East during the Middle Ages, have impressed and amazed people for generations. These impressive constructions were built for centuries and many are still left for us to see. These structures have resulted in many a photo-manipulations, sketches, and illustrations. In this showcase we're going to take a look at some impressive pieces of art featuring castles and towers that we've handpicked from the community over at DeviantART. Please enjoy!

The sunlight breaking through the mist and the golden, warming colors makes this a piece that does stand out.

Canadian artist Noah Stacey has painted his very own majestic Photoshop-version of the cloud castle.

This huge castle on a tiny island is created with Photoshop and Painter. An example of good lighting and an interesting fairytale style. 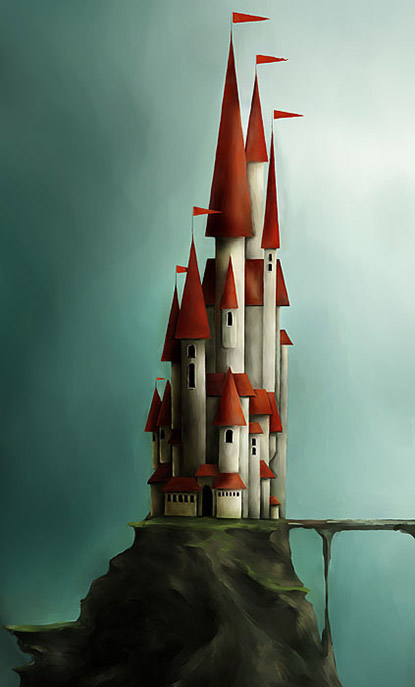 Castle of Spirits by Gummaid

A great example of IR photography with its colder white areas and the warm and inviting yellow. The photo is taken by Viktor Bors in Bojnice, Slovakia. 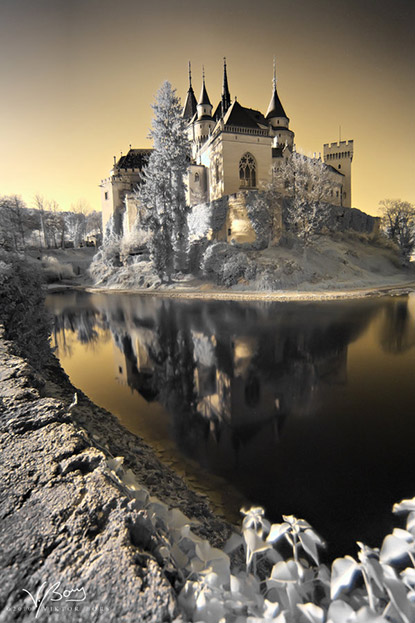 This landing tower construction that may look a bit like those found in World of Warcraft, has nice vibrant colors and a funny and clever construction.

This stunning photo-manipulation of the legendary island Atlantis, has a great atmosphere and a well-made composition. A dreamy piece that shows good skills.

The Tower of Souls II by Jihaus

The artist spent around 30 hours creating this infinite tower, that was made for a game. The vibrant colors and good lighting and shadow makes this a special piece that stands out. 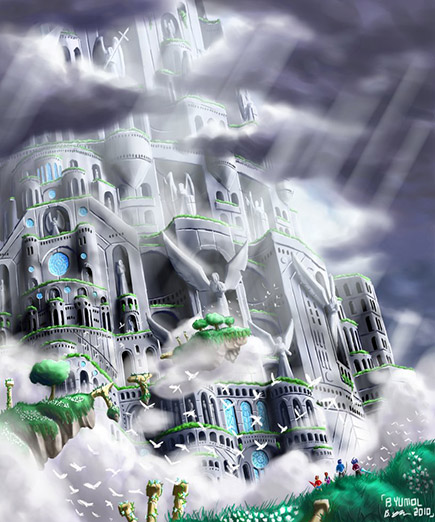 This wizard tower was first scribbled on paper, then Photoshop over pencil.

Once Upon a -Evil- Time by Fabriloddo

Originally an HDR from a castle at Eurodisney in Paris, the artist managed to turn this bright and joyful image into a convincing dark version. 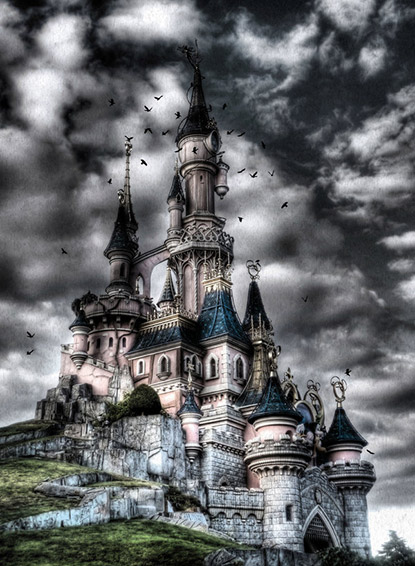 The artist impressively stippled this one for a school project over a period of approximately two weeks. Stippling basically means that this entire image is made up of tiny dots. The reference photo for this was the German castle, Neuschwanstein and the project was for a wine label.

The somewhat unusual color-scheme for the sky and clouds gives a warmer tone and almost a fairytale look. The sky looks like a shell surrounding the floating castle, and a planet peaks through, accompanied with a few beams of light.

This castle, the Himeji-Jo is considered the finest surviving example of 17th century Japanese castle architecture. This 3-layer linocut print has a nice perspective, clean lines and almost looks like vector art. 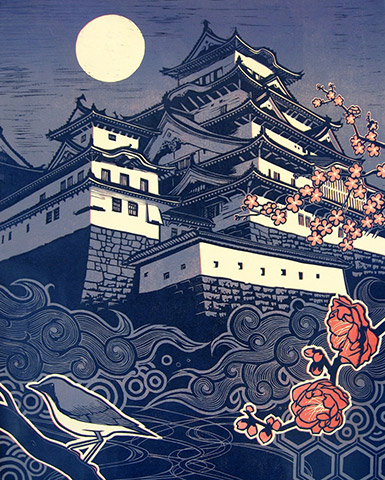 This digital painting is done in around 25-30 hours using Photoshop. The model for this piece is the castle Moszna in Poland, a fairly young castle with it's 100 years. The snow gives a great contrast to the castle, and the artist's eye for detail has truly given an impressive end-result. 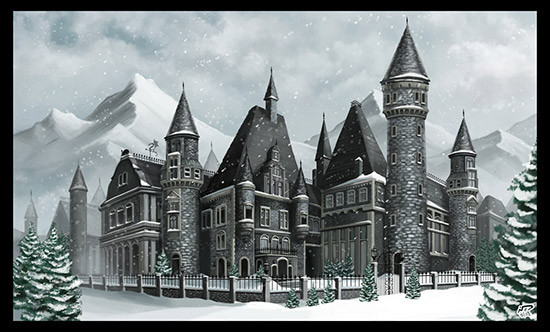 This photo-manipulation has a very unique look with the sky of planets, sun on the grass and a dreamy look on the building itself. 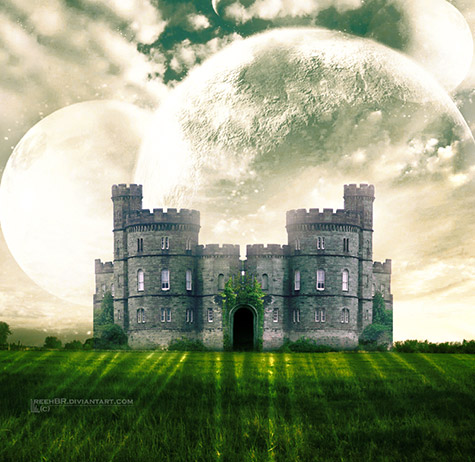 Castle in the Sky by Kimag3500

Inspired by Laputa (animated movie a.k.a Castle in the Sky), this floating castle and its monochrome green look is made with good composition and balance. 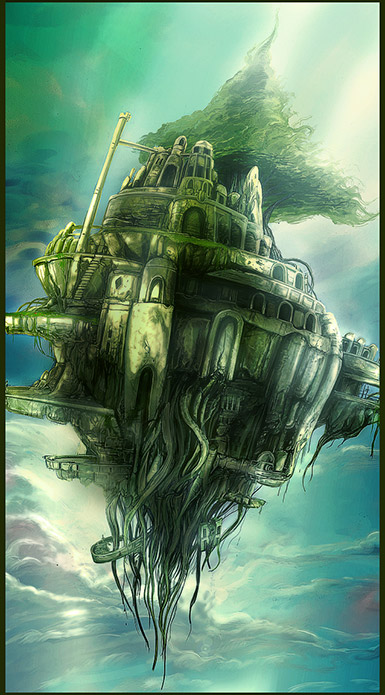 This fantasy-style Photoshop painting was made in an unbelievable 8 hours. The colors are nice and vibrant and give a great contrast between warm and cold in the image. The silhouette in the foreground gives it all a much bigger dimension. 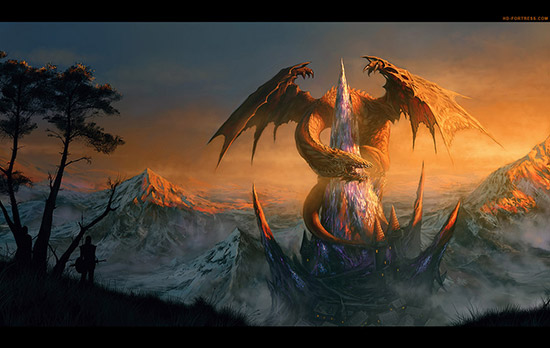 Another photo-manipulation and another flying castle. This one looks bright and a lot of details have been preserved really well. The added lens-flare is a detail that also adds to the realism. 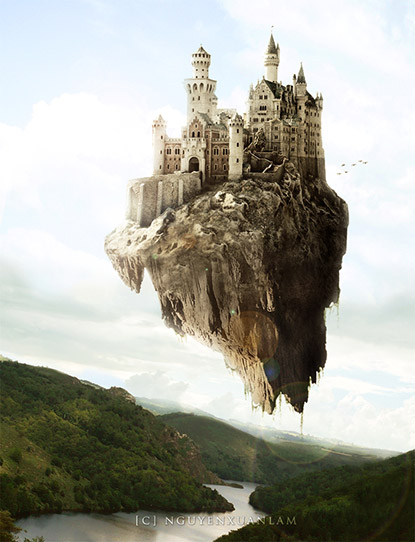 This fantasy castle was drawn with a ballpoint pen. The level of detail is very impressive and shows both patience and skills.

Twisted Castle - The Frontier by Ionixis

A piece with a lot of personality. The cartoon-like style in combination with all of the details makes this one a pleasure for the eye. 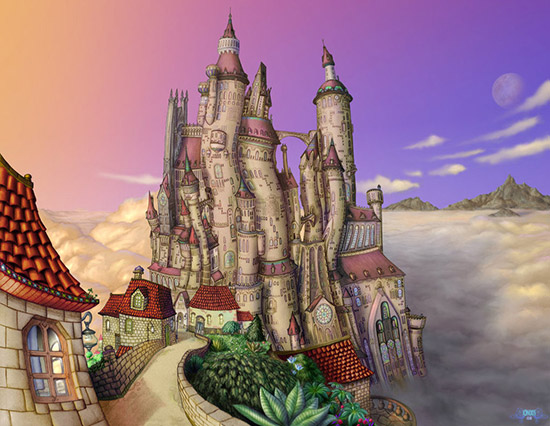 Inspired by the Lord of The Ring Triology, Canadian artist Frederic St-Arnaud created this image. The cold overall tone in the image is brilliantly accompanied by the golden in the grass and on the towers.

This rough castle concept was made for a music clip for a girl-band. This castle would be modeled and rendered in 3D media and added to real scene. The artist has come up with a nice mix of Asian architecture and a classic gothic temple style. It does give some association to the Emerald City (The Wizard of Oz) and the choice of greens and blues are a nice contrast to the orange details.

This is a depiction of the Cahir Castle that is located in Ireland. It has a nice painted look with a bright lively green. 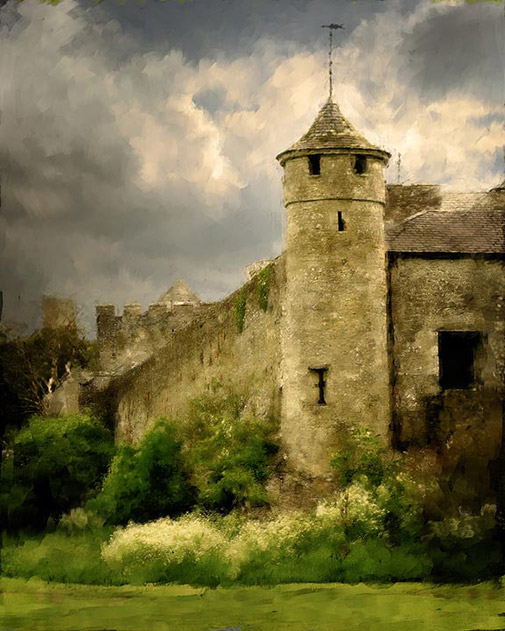 5 hours of digital painting in Photoshop gave this interesting result that looks just like a traditional painting and gives the feeling of real canvas.

This photo-manipulation has a lot of work behind it. The dragon at the bottom alone took around a day to make by using mostly elements from bats, adding some lizard and eagle as well. A well-made piece that takes advantage of a very interesting angle as well.

This one's a rework of one of the artist's early oil paintings. The castle against the sky and the moon gives a very classic look. The color scheme used gives a magic atmosphere, and notice the details and persons in the foreground that may be telling their own story. 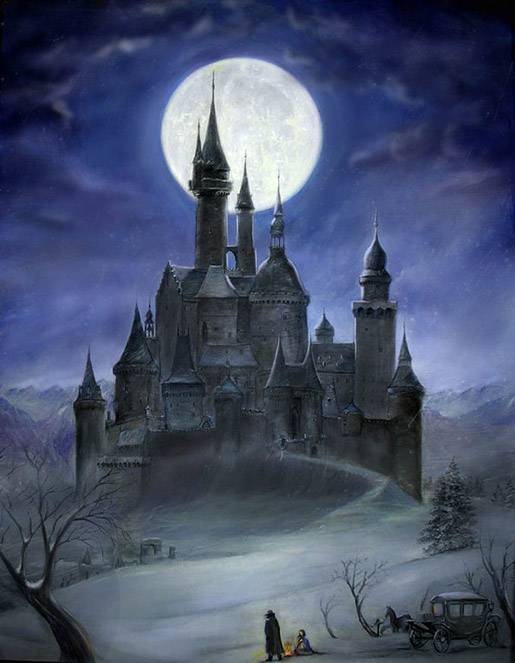 The artist speed-painted this castle in Photoshop for a beer label. Both the use of light and shadows and the vibrant colors stand out to make this a very nice one for our collection. The unique shadow style adds that extra little signature that makes it all unique. 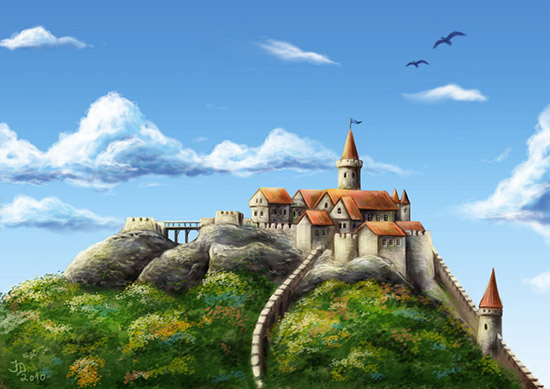 When The Full Moon Falls by Wyldraven

A dark photo-manipulation with good composition and several different components that are put together really well. 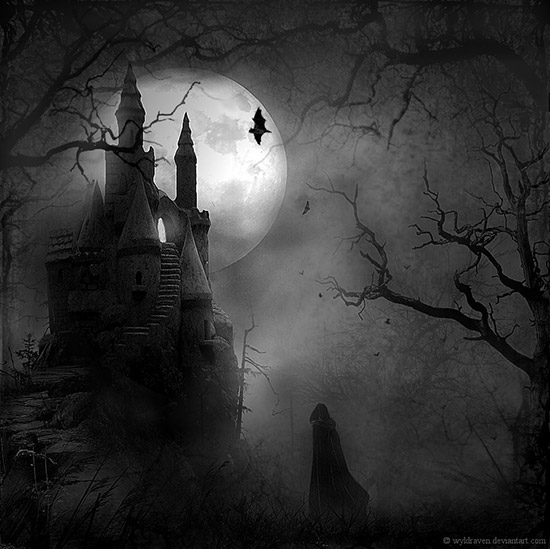 This surreal drawing was drawn out using pencils (2B through 6B). A very creative drawing that challenges our perception. The work is well done through the added reflections, shadow and light and a powerful sky. According to the artist this one took about a month to finish. 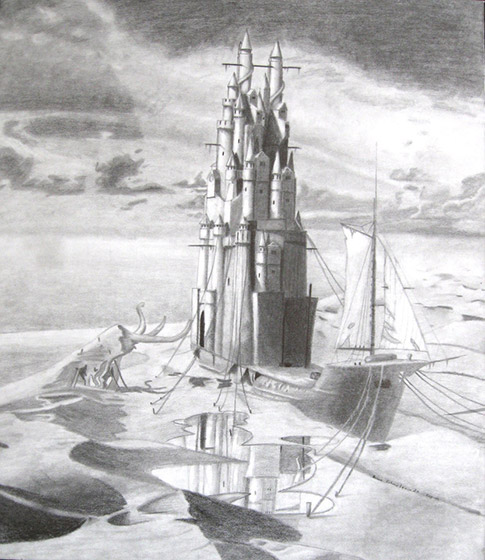 The Raven's Tower by Jerry8448

This piece looks like something from a rather scary story and beautifully unites an almost cartoon-like sketched style and the darker and more realistic. The perspective and composition works well, along with the light from the top right and the many added details. 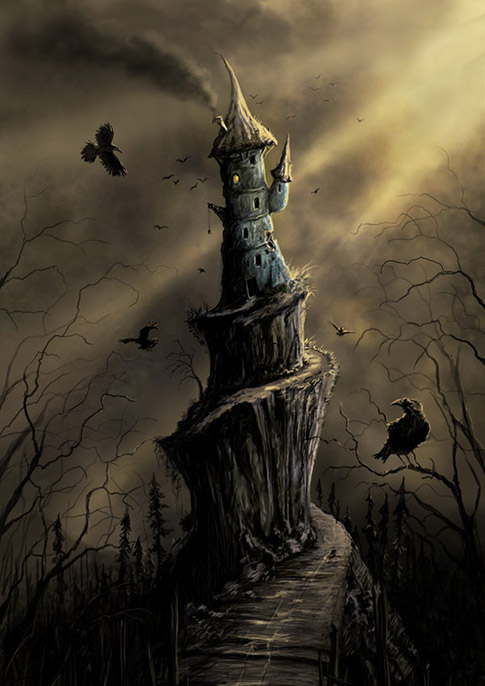 A 1.5 hour speed painting of a tower/castle construction in an alien world. A dark, yet warm atmosphere, along with the blurred foreground elements gives you a feeling of actually being there. An interesting and different piece with a great angle that was painted in amazingly short time. 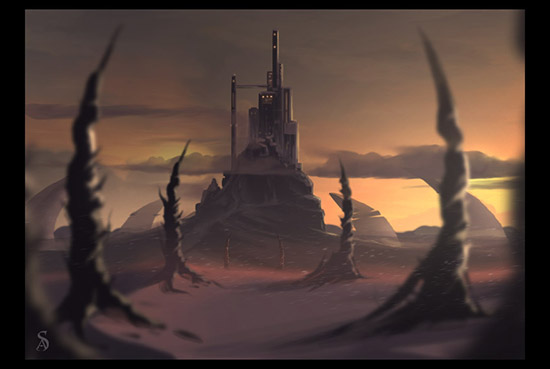 Do you feel inspired and want to make a fantasy-style artwork with castles and towers on your own? Finally, we've put together a few tutorials for you to have a closer look at to get some inspiration and maybe even polish some of your skills.

How to Create a Flying Land Illustration On Fire

This tutorial was featured here on our site back in July of 2009. Check it out now to see how you can create your own effect very much like the floating islands you've seen in several of the previous artworks. 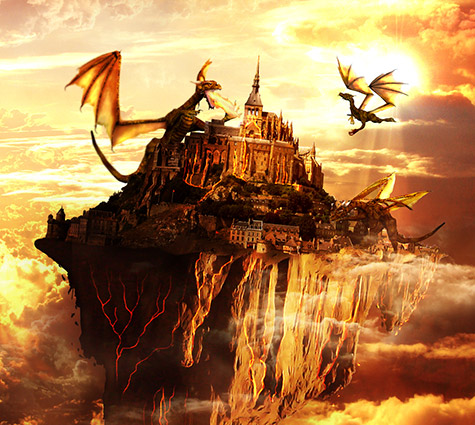 Castle in the Sky

This Alfoart tutorial will teach you how to easily create a photo manipulation with a vibrant green landscape, a dramatic sky and the castle wrapped in clouds.

You can find this tutorial at the PSD-dude website. Using both photo-manipulation techniques and some illustration skills, you'll get a very nice result.

There are so many great artists out there, using both digital and more traditional art forms to express themselves. In this article we've seen a variety of approaches when it comes to using such well-known elements as towers and castles. These buildings are familiar to all of us and we see them as landmarks, playing the leading role in art and as parts of scenes in fairytales and in history. We hope you've enjoyed this collection and would love to hear your feedback! 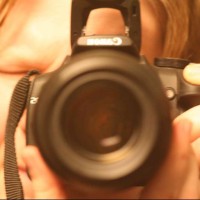 Hilde Torbjornsen
Hilde Torbjornsen is a Norwegian girl with a passion for design, photography and freelancing. She's a freelance designer who's written hundreds of articles for many websites around the world. Check out her own website Designer77 or follow her on Twitter.
Weekly email summary
Subscribe below and we’ll send you a weekly email summary of all new Design & Illustration tutorials. Never miss out on learning about the next big thing.
Advertisement
Translations