Vector artwork is everywhere these days, and book jackets are no exception. Often striking in their simplicity, vector graphics and illustration can stand out in a sea of photo-based covers on the bookshelf. As I looked through cover designs of the past few years, certain themes emerged. I have identified four, which I'll call: Silhouettes, Pattern & Decoration, Abstraction and Type With A Twist. In addition, there are a few covers that feature beautiful full-on vector illustration. Barring a conversation with the designer, we cannot be certain that these covers were drawn with Illustrator, et al. But they all have a look that could easily be achieved with a vector drawing program. Be sure to click on the illustrators' links and get inspired!

Black paper cutout portraits became popular as an aristocratic amusement in the late 18th century. The term "silhouette" was coined from the name of a French finance minister and practitioner of the art, Etienne de Silhouette. The word now refers to anything that looks like a shadow or cut-out of a person or object. Silhouettes can have both a historical reference and a modern feel. Their anonymity makes them at once recognizable and universal. Here are some examples:

"The Chess Machine" by Robert Löhr

Set in 1770 Hungary, about a man who invents a chess-playing automaton. The silhouettes on the cover lend a historically appropriate note to the design.

"English As She is Spoke" Jose da Fonseca and Pedro Carolino (Authors), Paul Collins (Editor)
Designer: Alvaro Villanueva
In 1855, Jose da Fonseca and Pedro Carolino wrote an English phrase book for Portuguese students. The problem was, they didn't know any English. The silhouettes and speech bubbles on the cover convey the unintended humor of this classic re-edition. 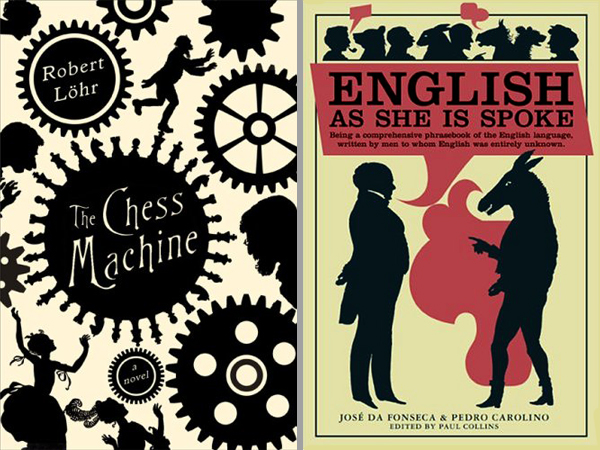 "Sharp Teeth" by Toby Barlow
Designer: Christine Van Bree
The arresting silhouette of a fierce dog is a great fit with this thriller, which follows three packs of feral dogs in East Los Angeles.

A non-fiction book about race and gender, and their emotional underpinnings in American politics. The white, female silhouette in side the black male, suggests the way our leaders fame these two issues and how we perceive them. 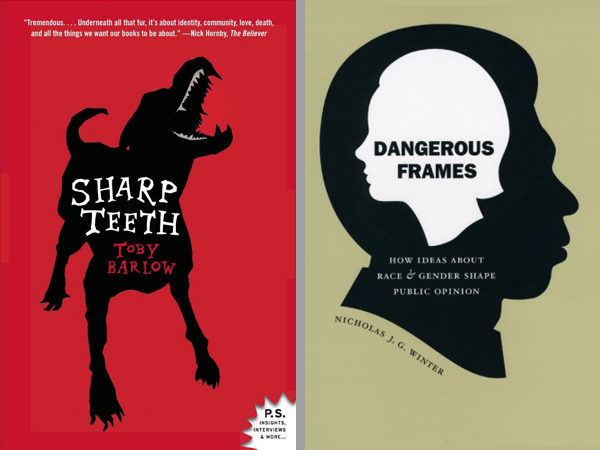 "The Secret Life of Emily Dickinson" by Jerome Charyn

Charyn channels the famous American poet, liberating her from the prim and proper image we associate with her. This illustration conveys that hidden life.

"The Gettysburg Addres" by Abraham Lincoln

The striking high-contrast eyes inside the familiar Lincoln profile, coupled with a strong type treatment, is reminiscent of a 19th century broadside. 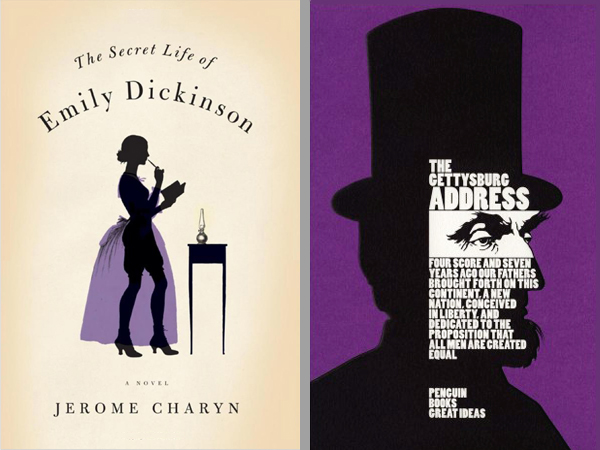 "The Curious Case of Benjamin Button and Other Jazz Age Stories" by F. Scott Fitzgerald

These two covers illustrate the subject matter with silhouettes and a smile. The color schemes also complement the time period of the stories.

"Americans in Paris" by Adam Gopnik

Sometimes less is more, and these two covers tell a lot with just a little. 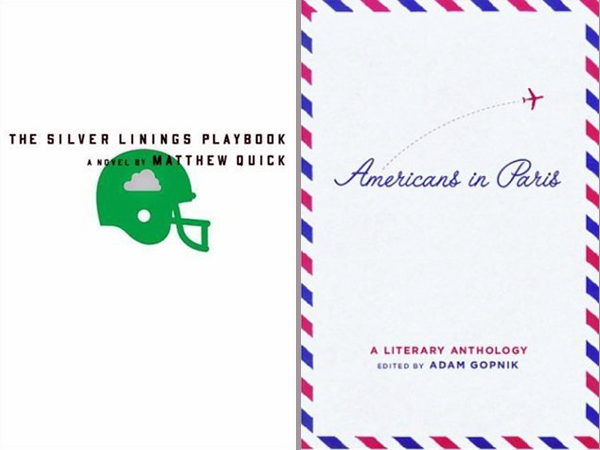 "The World Without Us" by Alan Weisman

Designer: Pete Garceau
Visually arresting and conveys perfectly the theme of the book.

Vector drawing programs are an excellent tool for making patterns and symmetrical designs. A quick flip of an object can create a mirror image in an instant. Here are some symmetrical patterns and other decorative covers:

"Chances Are" by Michael Kaplan and Ellen Kaplan

Two playing card designs, for books about gambling and probability. 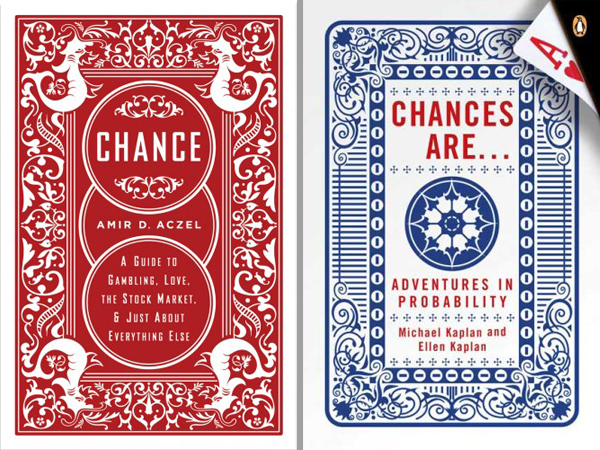 "Confessions of an English Opium Eater" by Thomas De Quincey

This flowing pattern could represent smoke, hair, or the poppy flower itself.

This vintage-looking cover brings to mind a garden gate, with a twisted pattern reminiscent of a weed or vine.

Some of the most beautiful patterned covers of late are the Penguin Classics Hardcover series, designed by Coralie Bickford-Smith. Read an interview with her here.
The covers are collected in a Flickr set.

In the following designs, the concepts and illustrations have been reduced to their most essential elements. The results are bold, eye-catching graphics.

For this biography of the American architect, the designer has abstracted the interior rotunda of the Guggenheim Museum, one of Wright's most famous works.

"No Cause for Indictment" by Ron Porambo

At first glance, the illustration is nothing more than exploding parallelograms, but on closer inspection, the shapes become city blocks breaking away from a map. Appropriate for a book about urban riots.

A collection of authors write about the 50 states. A talk bubble becomes the field of stars on the US flag, and the stripes hold a partial list of authors' names.

"The Theocons" by Damon Linker

For this book about Christianity in American public life, the abstraction says it all.

"Lopsided: A Memoir" by Meredith Norton

A universal pictogram is altered in an unexpected way to convey the humor in this memoir. The head falling off to the right gives movement to the illustration and suggests the "distraction" in the subtitle. The addition of color draws attention to the figure's lopsided breasts.

A design firm's philosophy is outlined in the book. The simple shape represents the reduction of design to its essential elements. It also has the optimistic quality of a glass half full.

"The Sheriff of Yrnameer" by Michael Rubens

An abstract clown graces the cover of this futuristic, sci-fi comedy.

"The Unbinding" by Walter Kirn

Retro design often works well for novels set in the not-so-distant future. Reminiscent of Saul Bass, these abstracted eyes are perfect for a dark comedy about surveillance culture.

Type With A Twist

Typography alone can make for an arresting book jacket design. On the following covers, the artists use type in unexpected and clever ways:

This is a reference book of contemporary logo design, so it is fitting that the title itself has been made to look like a logo.

The subtitle of this book is "A Concise Guide to the Most Important Product on Earth." The powerful simplicity of the cover design conveys the subject's monumental presence in our lives. 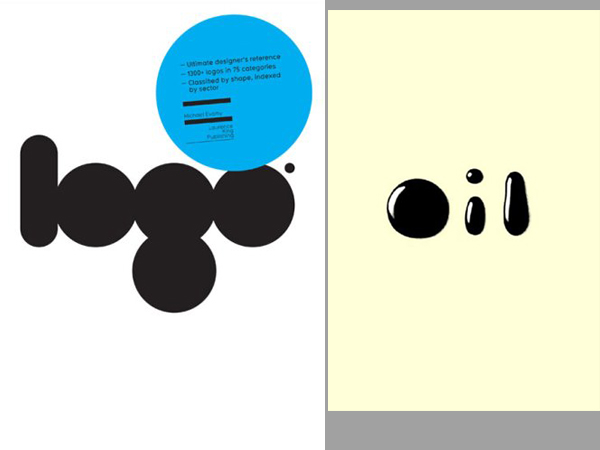 "We Are the Friction" by Various

A book of illustration and short fiction by 12 pairs of writers and illustrators, designed and published by Sing Statistics. The cover has a poster feel, which contains a statistical inventory of the contents.

"Why Europe Will Run the 21st Century" by Mark Leonard

Simple typographic cover, with the letters EU emphasized. The colors underscore the concept of a diverse European Union. 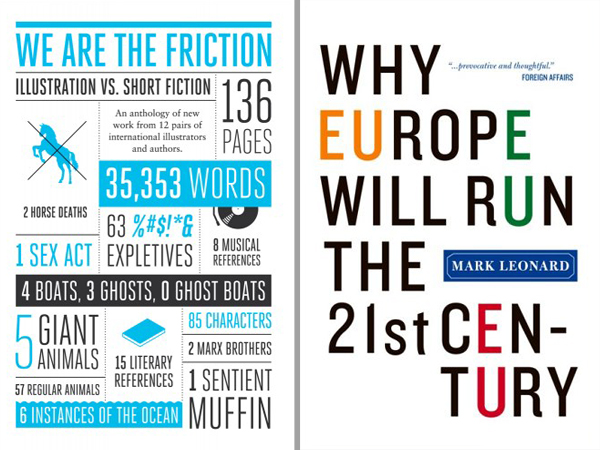 "The Mayor's Tongue" by Nathaniel Rich

These two covers by Jon Gray use type as texture. Mixed with simple shapes, the text is not readily legible, but attention-grabbing nonetheless. 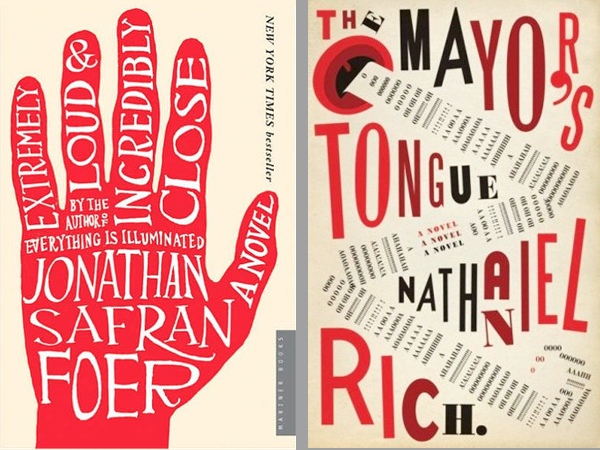 "Natasha And Other Stories" by David Bezmozgis

The stories in "Natasha" center around a family of Russian Jews who settle in Toronto. On this cover, the A's are stylized Russian nesting dolls.

"The First Word" by Christine Kenneally

A linguist writes about the evolution of language. The cover illustration is a playful typographic reference to the classic visualization of human evolution: a line of ever-evolving figures from ape to man. 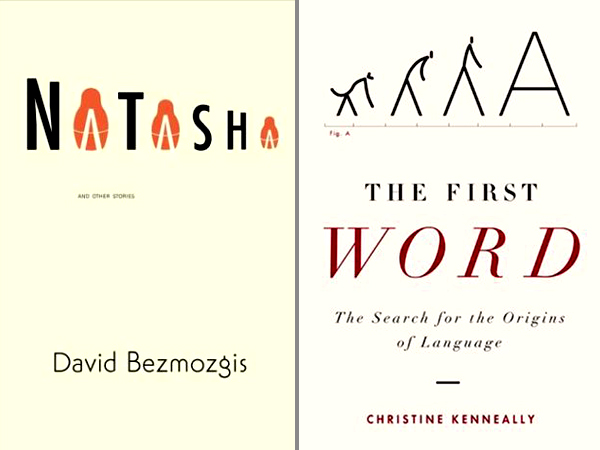 Again, while we can't be certain that all of these covers were drawn with Illustrator, or other vector software, they are all striking in their hand-made quality. Let's hope that a vector trend continues in book cover design!

"Maps and Legends" by Michael Chabon

Read more about this cover here. 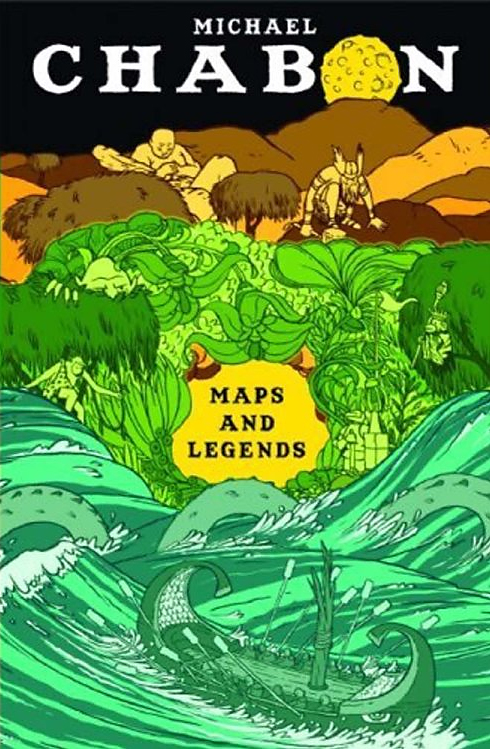 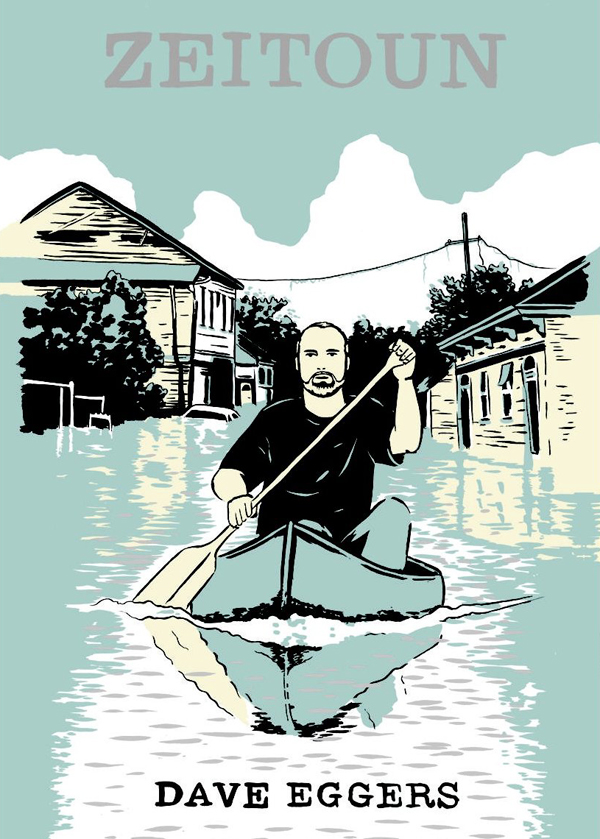 "Marcelo in the Real World" by Francisco X. Stork 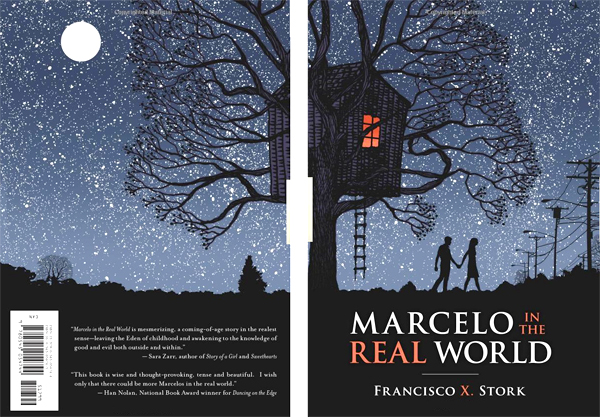 "The Ten-Cent Plague: The Great Comic-Book Scare and How It Changed America" by David Hajdu 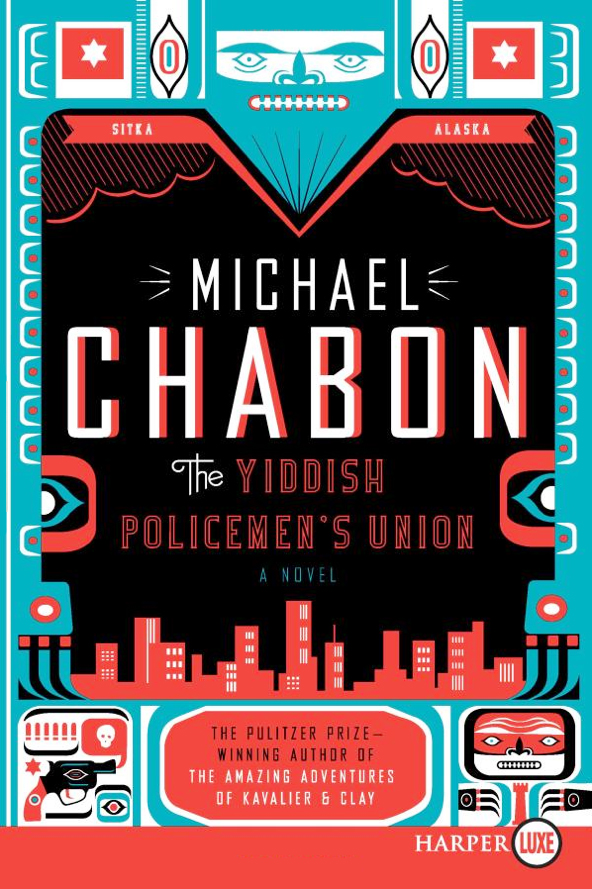 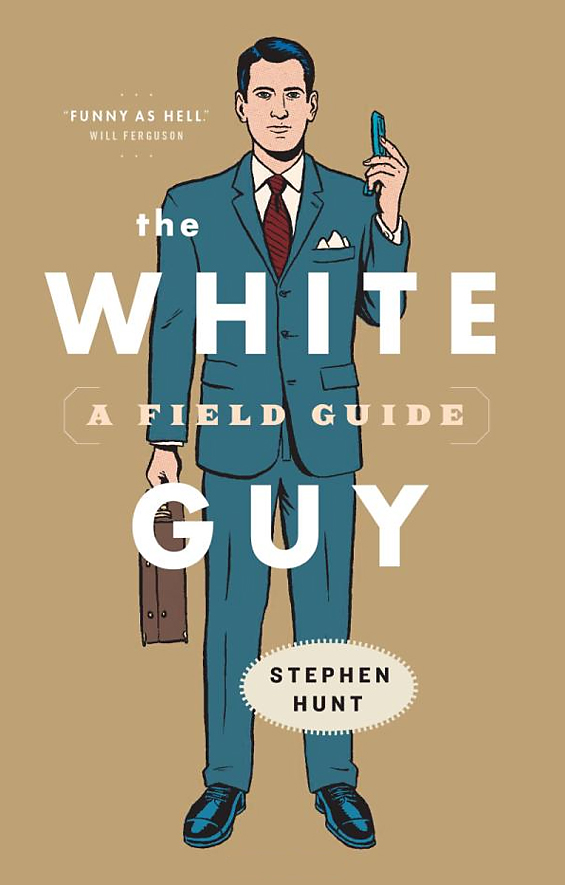 "A Short History of Tractors in Ukrainian" by Marina Lewycka

"The Broom of the System" by David Foster Wallace 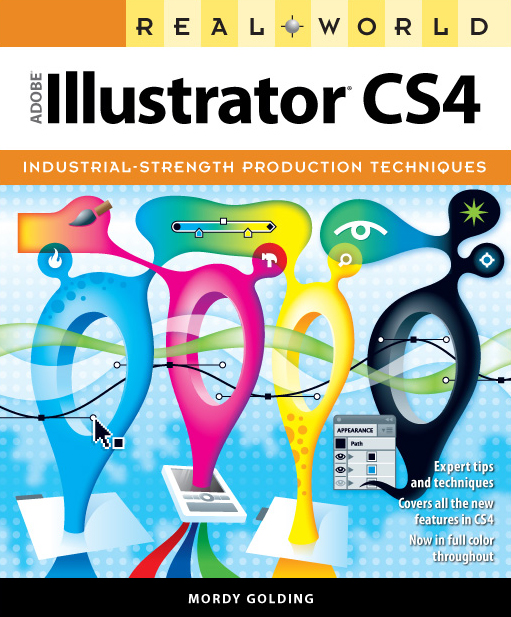 "Bite Me" and "A Dirty Job" by Christopher Moore

All covers are the copyright of their respective publisher.